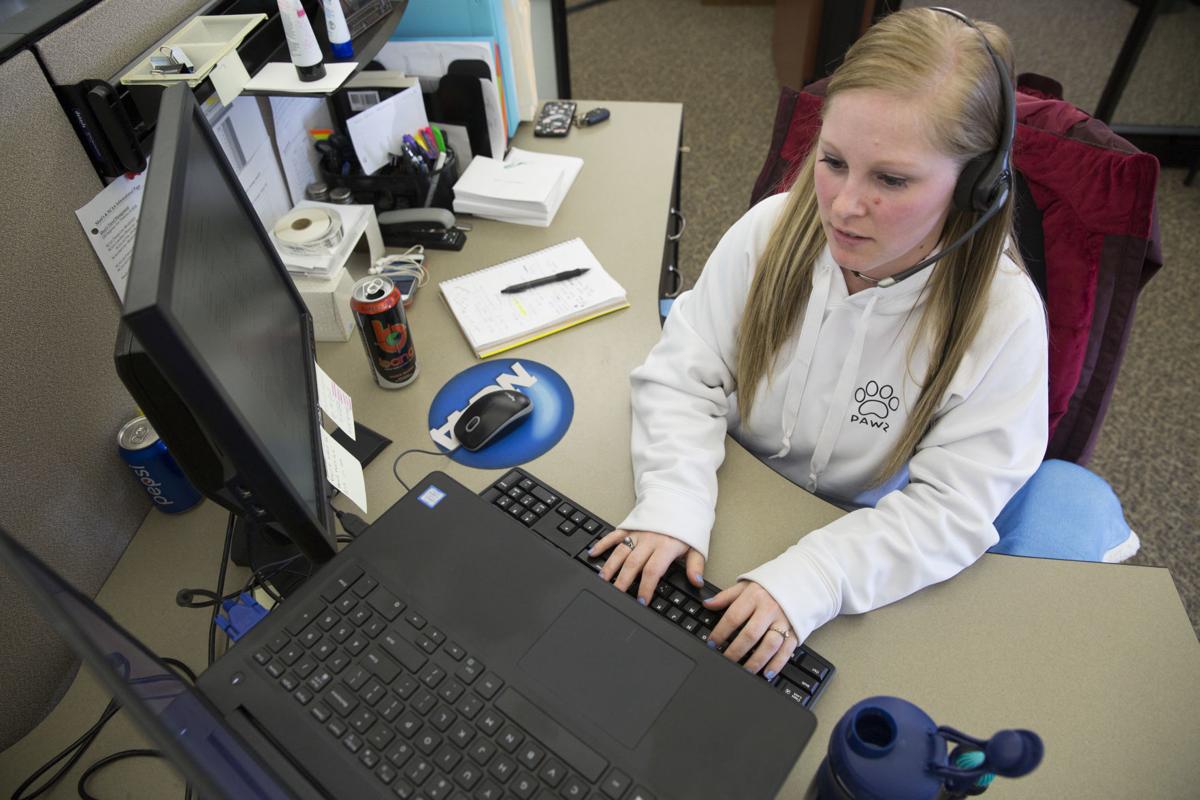 Danni Bildt works on getting flights for North Michigan University’s skiers while working at Short’s Travel. 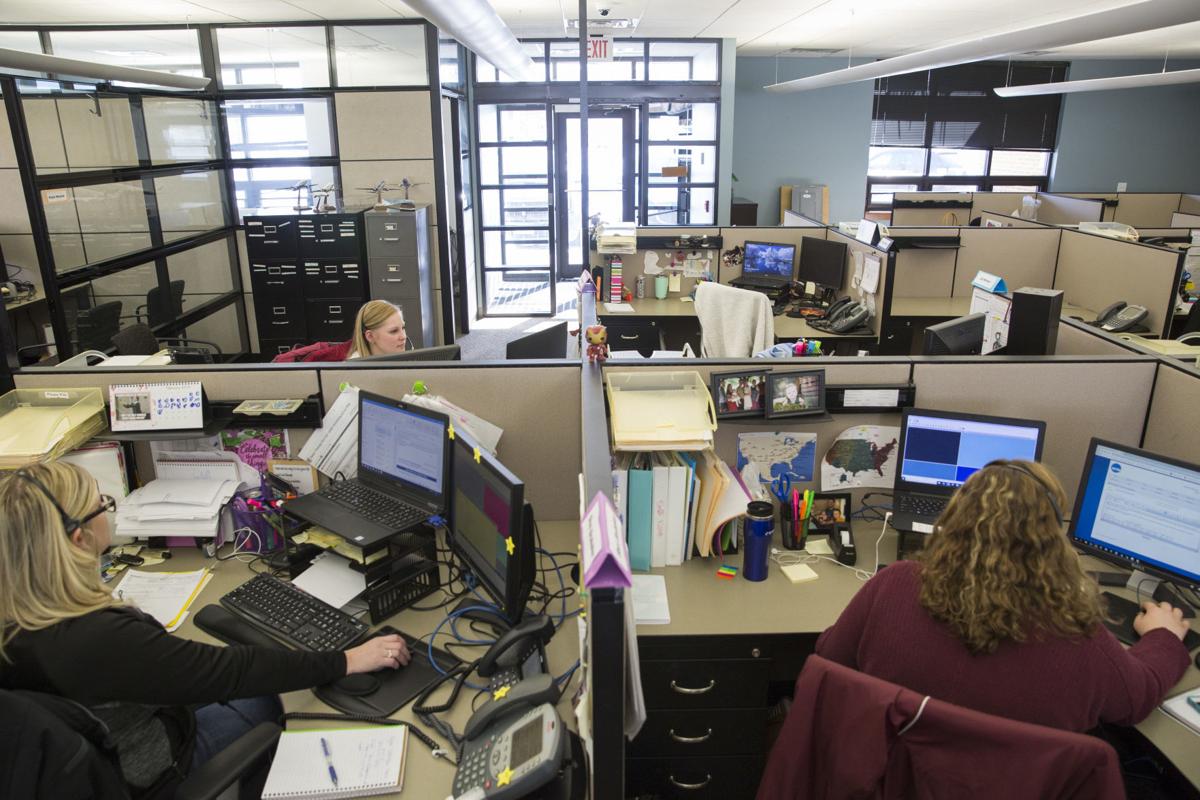 Sports agents work on getting flights scheduled for athletes while working at Short’s Travel Management during the 2019 NCAA March Madness.

WATERLOO — Brackets are being set up and 68 college teams are prepping for the “March Madness” that is the spring NCAA Division 1 men’s basketball tournament. At Short’s Travel Management, the NCAA championship division of travel agents are running their own drills and girding themselves for the onslaught of complex travel arrangements that must be made to get teams from point A to point B for games.

“It really is what the term says — madness. All of the pairings are released on Selection Sunday, and we don’t get the information really before anyone else does. Some of the travel has to happen the next day, so there are a lot of moving parts. Everything has to happen quickly and efficiently, and we stay on top of it. Our agents are making all of that happen,” said Ryan Dohmen, president of STM Charters, a division of Short’s.

“There’s a lot of intensity because you throw weather on top of it. Every year, it seems there’s a winter storm somewhere that we have to contend with,” he noted. “The first week to 10 days of the tournament are pretty crazy. We have our dedicated staff year-round for the NCAA, but in March, we’ll pull people in from our other offices and hit the ground running.

“All the phone lines and computers are set up, and on Saturday before we’ll have briefings, some training sessions. When things start happening on Sunday, it’s game on,” Dohmen explained.

On the heels of the men’s NCAA tournament announcements, another 64 women’s NCAA Division I basketball teams are selected, followed by 36 teams for the NIT. Short’s arranges travel for all of these teams. “It’s stressful, high-profile and a tight turn-around,” says Kris Fratzke, account executive.

As teams are winnowed out of the tournament, remaining teams have a higher profile — “and bigger needs. They’re more particular about the time they depart, when they arrive, amenities on the aircraft, the size of the aircraft,” she said.

Players, coaches, staff, administrators, bands and cheerleaders travel on the same plane. “We have to charter aircraft, and we become our own little airline for about two weeks. On one day, we’ll have 54 single charter flights with around 120 people on each flight,” Fratzke explained.

Regular-season sports are handled by a different group within the Short’s organization, Fratzke said. When a team reaches championship level, travel arrangements are passed over to Short’s NCAA Championship Division.

The company moves more than 100 sports teams year-round in the regular season, said Dohmen. Regular-season sports teams are already being booked for fall travel, including football, soccer and volleyball.

In October 2018, Short’s Travel became the official travel partner of the National Junior College Athletic Association. NJCAA President and Executive Director Dr Christopher Parker said in a press release, “With Short’s Travel Management on our side, we have taken that burden away from them with the top-of-the-line service Short’s provides. We are excited to team up with such a prominent company in the travel industry.”

Short’s Travel Management Inc. is a family-owned, woman-owned private corporation established in 1946 in Iowa. Headquartered in Waterloo, the company has an Overland Park, Kan., office and numerous on-site locations. It is ranked as one of the top 20 travel management companies in the industry, specializing in corporate, government, university and sports travel, groups and meetings and air charters.

The company’s stated mission is “To enhance the experience of getting there, being there and coming home.” Dohmen said the company is proud of its service, teamwork and dedication to clients, as well as its ability to innovate. The company has a 99 percent client retention rate and a 96.2 percent client satisfaction rating, according to the website.

Short’s agents are “nimble” and its information technology department is “robust,” Dohmen said. “We have 150-ish employees around the country and about 10 to 15 percent of them are in IT. A lot of what we do is technology-based. We’re building new products, and we’ve developed our own online travel portal, online booking tools and processes that make our agents more efficient. It’s all developed and maintained in-house, which also sets us apart from other travel companies.”

Short’s CEO David LeCompte listens to its clients and encourages feedback, Dohmen said. “A client makes a suggestion or comes up with a cool idea, and we’ll see if it’s something we can build into our processes. That mentality is part of our success.”

On the NCAA Championship Division sports desk, each team is assigned a specific agent. “They work with the same teams and universities and get to know their teams. It’s very personal for us. Our clients talk to a real person each time. Booking sports travel is what our agents do every day, all day,” he explained.

The business has grown by leaps and bounds in the past few years, thanks to client referrals. “Our clients say ‘this is who we work with, this is what they do for us, our consultants are fabulous.’ Short’s is successful because of the personal touch we offer. In some instances, we have a Short’s employee on-site at a team’s university, and the coaches can go directly to the agent and tap them on the shoulder.”

Short’s Travel Management (STM), based in Waterloo, said it has acquired Meetings Plus Moore, a Tennessee-based company with nearly 20 years of experience in meetings and events planning, incentive travel, sports team event management.

Danni Bildt works on getting flights for North Michigan University’s skiers while working at Short’s Travel.

Sports agents work on getting flights scheduled for athletes while working at Short’s Travel Management during the 2019 NCAA March Madness.