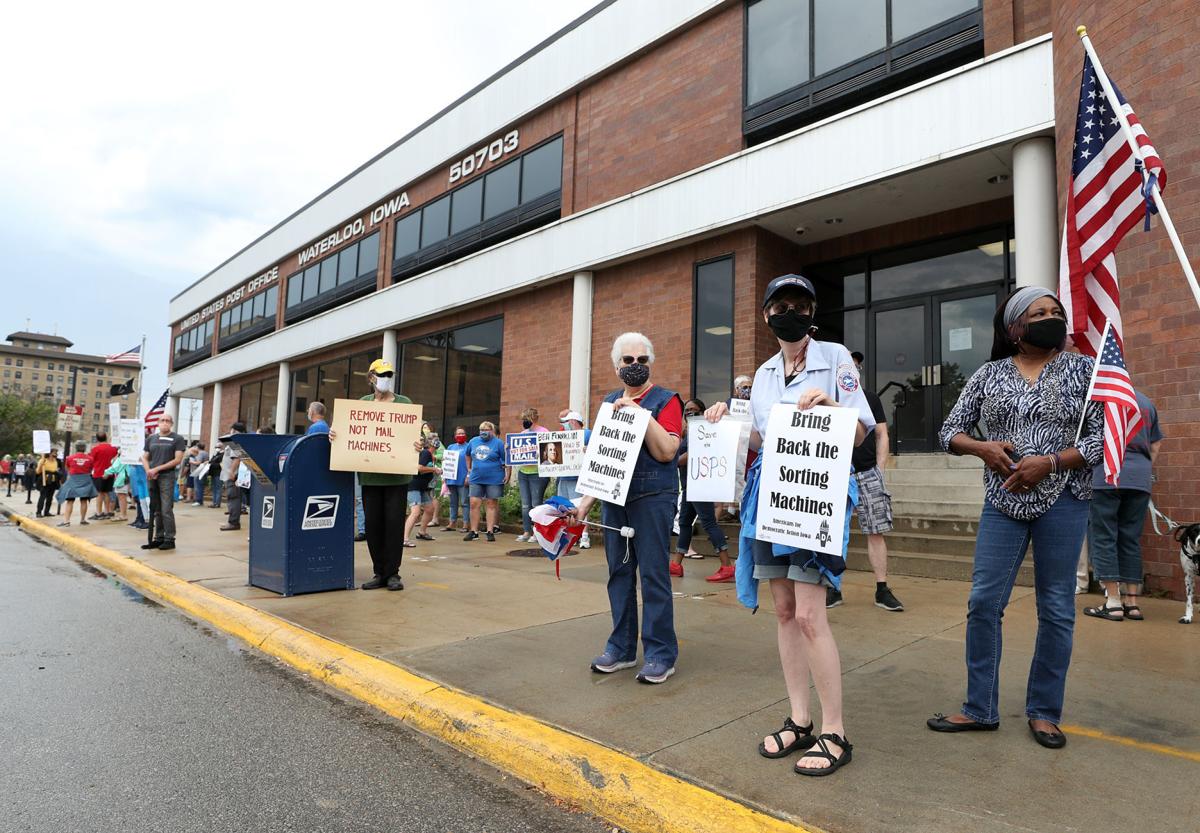 From left, Anna Hucke, Deanna Himschoot and Vikki Brown hold signs and a flag at a rally against changes, including removal of a sorting machine, at the United States Post Office in Waterloo on Saturday. 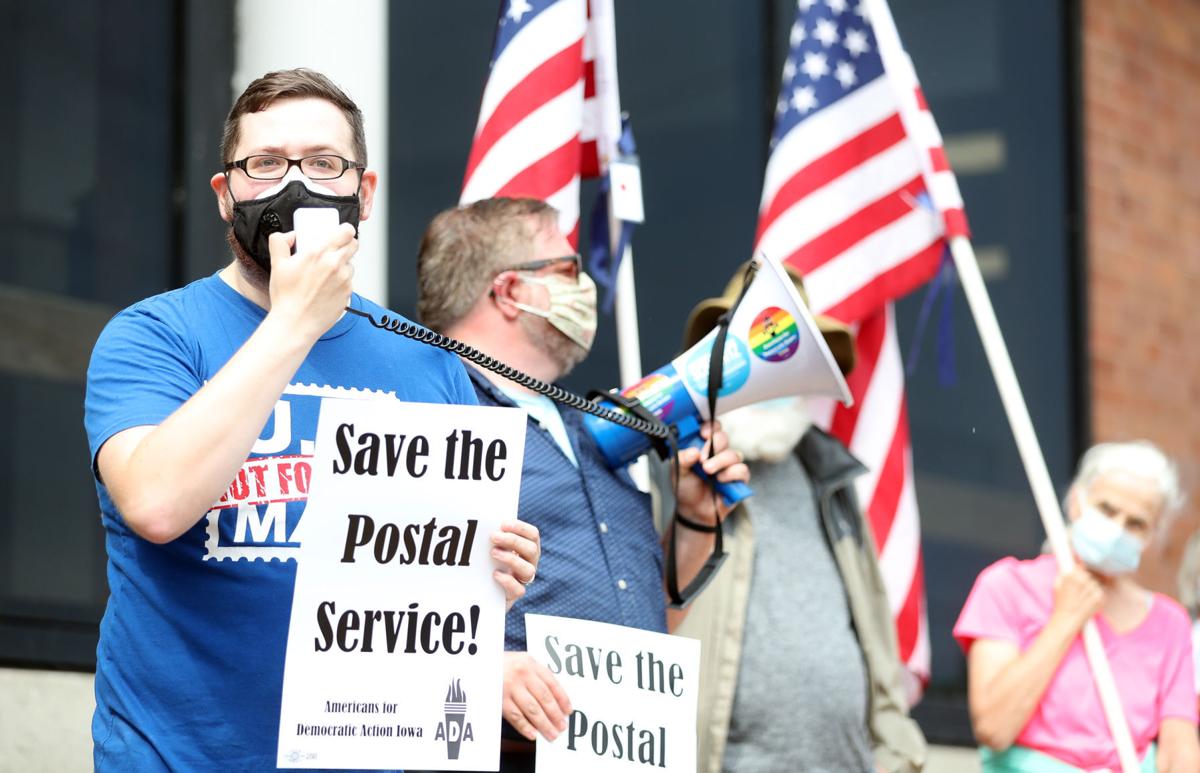 WATERLOO — Dozens of people gathered Saturday morning outside of the post office to demonstrate against what they say are efforts by the Trump administration to limit voting by mail in this fall’s presidential election.

Well over 60 protesters lined the downtown sidewalk in front of the building — some spilling into Sycamore Street at times — holding signs, American flags and umbrellas. Skies were overcast and thunder rumbled in the distance, but the rain largely held off until the event had wrapped up.

The protest was spurred by changes in overtime rules, delivery practices and the removal of hundreds of mail-sorting machines and collection boxes across the country. Delivery delays are alleged by critics of the moves who also see a potential impact on mail-in voting.

“We’re out here today because the postal service has been under attack by the right for a number of years,” said Chris Schwartz of Americans for Democratic Action Iowa and a Black Hawk County supervisor. He told the crowd those attacks have increased since Louis DeJoy, a major Trump campaign donor, took over the role of postmaster general in June and implemented what he calls cost-saving the measures.

Schwartz claimed DeJoy is “heavily invested” in companies that compete with the United States Postal Service. “So, make no mistake about his motives,” he said.

“I am hearing from seniors every day how worried they are that this is going to impact them,” said Logun Buckley, an organizer with the Iowa Alliance for Retired Americans. “It is no coincidence that one of our sorting machines has been removed.”

Kimberly Karol, president of the Postal Service Workers Union in Waterloo, appeared on several national news networks last week talking about the removal of sorting equipment from the Waterloo post office. She was later interviewed by The Courier.

After publication of that story, The Courier received a statement from Dawn Cook, the consumer and industry contact manager for the postal service’s Hawkeye District, acknowledging removal of a delivery bar code system machine from the office.

“We have new technology which increases the level of sortation and capacity on our letter machines, but this requires floor space,” Cook said in the statement. “Moving out some older, low tech machines to make room for this new tech is the smart thing to do.

“And all of this actually increases our capacity to handle both letters and the growth in parcels,” she added. “We currently run at 40 percent of our overall capacity. These changes will put us at 30 percent capacity with plenty of room to handle short-term fluctuations.”

She said removal of the older machine “will in no way impact the processing of mail in this facility. With letter volume significantly down, by removing this machine we will be increasing our space to handle the influx of packages.”

But those attending the protest expressed concern that there could be more to the changes being made in Waterloo and other post offices across the country.

Waterloo postal employee Quinten Rose, who joined the protest with his wife and three children, acknowledged that “one of five letter sorting machines has been removed” from service but was still in the building.

“I just don’t agree with what DeJoy is doing,” said Rose. He has seen an influx of mail since concerns emerge with the coronavirus pandemic in March due to increased online shopping through services like Amazon and more people getting their medications sent to them. He suggested rather removing machines “we need to be expanding.”

Margaret Whiting was worried about the postal changes, as well.

“I don’t want my mail slowed down,” said the Waterloo woman. “I just think it’s ridiculous. We need to demand the sorting machines go back in.”

Whiting, who doesn’t work for the post office, said her 94-year-old mother-in-law did at one time and wanted to attend the protest but decided against it because of age- and COVID-19-related concerns.

“She worked so hard to get the mail out on time,” said Whiting, during 12 years of service in northern Minnesota. She said her mother-in-law was upset about any potential slow-down in delivery, as well.

Schwartz and Buckley called on Sens. Chuck Grassley and Joni Ernst to support legislation approved in the U.S. House protecting postal services. They also encouraged attendees to not let the Trump administration’s tactics keep them from voting by mail.

“Vote early as soon as you get your absentee ballot,” said Schwartz. “Don’t let them scare you away.”

WATERLOO -- Communication problems mean Black Hawk County residents may have to use a different number to reach dispatchers.

“We need to give the post office more money, but none of this has anything to do with making sure that we are able to process the ballots, get the ballots to be counted,” he told reporters Monday.

From left, Anna Hucke, Deanna Himschoot and Vikki Brown hold signs and a flag at a rally against changes, including removal of a sorting machine, at the United States Post Office in Waterloo on Saturday.