Editorial: Now is the time to celebrate American democracy, not sow more division
0 comments
Share this
{{featured_button_text}}
1 of 2 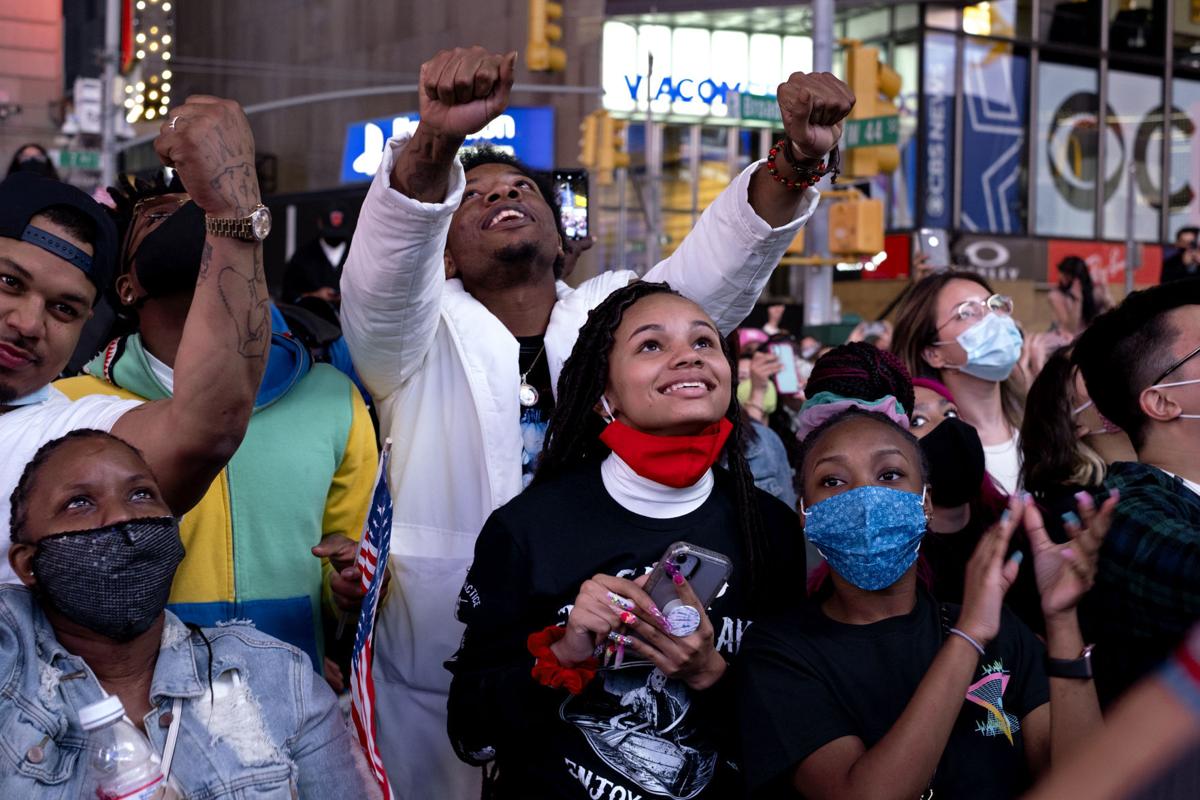 People in New York's Times Square look up at a monitor as President-elect Joe Biden addresses the nation, Saturday, Nov. 7. Democrat Joe Biden defeated President Donald Trump to become the 46th president of the United States on Saturday, positioning himself to lead a nation gripped by a historic pandemic and a confluence of economic and social turmoil.. 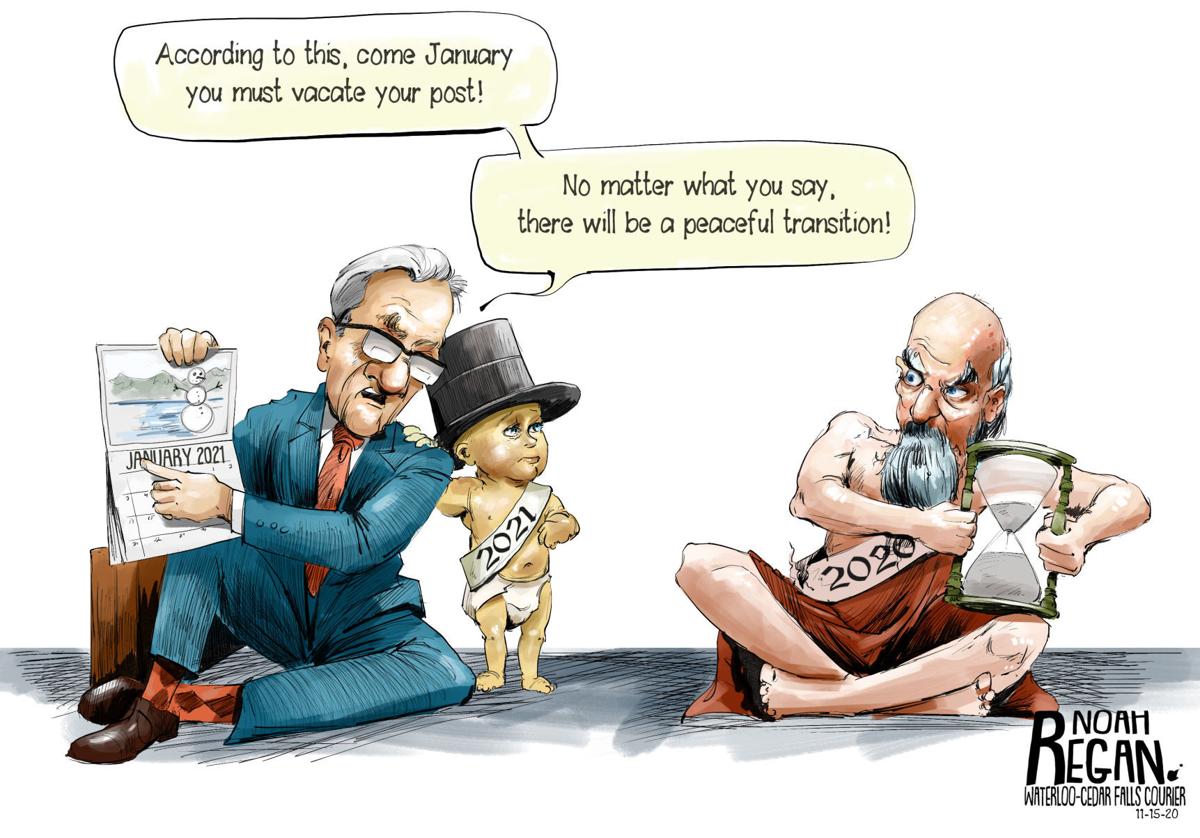 When all the votes are counted, and some recounted, and all the lawsuits decided, we will be left with this extraordinary fact: More Americans exercised their right to vote in 2020, at the height of a deadly pandemic, than in any other election year in this nation’s 244-year history.

That’s something not only to celebrate, but to see as a reflection of the greatness of our democratic system, where no matter how deep our policy differences, or strained our societal bonds, we resolve our differences at the ballot box.

By winning Arizona, Pennsylvania and Nevada, Joe Biden is now the president-elect, and for that we congratulate him and his running mate, Kamala Harris, who will become the first woman to hold the second-highest office in the land. And, it’s worth noting, both the Biden-Harris ticket and the Trump-Pence ticket won more votes than any others for office in U.S. history.

Some see that as a sign of deep division. We see that as a sign of a well-functioning democratic system. Indeed, despite the radicalism of fringe elements on the left and the right, the overwhelming majority of Democrats and Republicans agree that the only place to settle their often-profound differences is in the voting booth.

And that’s no fluke; it’s a consistent finding. According to Gallup, “The percentage of political independents has been 40% or higher in eight of the past nine years — all but the 2016 presidential election year.” That’s a testament to the independent nature of most Americans, even in the most partisan times.

In our era of 24-hour news channels and nonstop social media, it’s sometimes easier to focus on what divides us rather than on what unites us. But for all the talk of hyperpolarization in today’s America, we still have shared values — chief among them the “sanctity of the vote.”

Those who are calling the still-incoming election results “unlawful” or “fraudulent” can pursue those claims in a court of law, as they surely will. But calling the entire process in some cities and states “lawless” is not only terribly hyperbolic, it’s untrue. The vast majority of Americans have faith in our system to identify and weed out any fraudulent votes that may be uncovered. But that system works according to the rule of law, not according to frantic partisan allegations.

We believe that, despite the often heated and sometimes irresponsible rhetoric, justice will prevail and the winner of this election will be clear and undisputed by the overwhelming majority of Americans, regardless of party affiliation. And we will once again realize, as Abraham Lincoln so famously said at the close of our nation’s bitterest struggle, “We must not be enemies.” And that, “Though passion may have strained, it must not break our bonds of affection.”

This hard-fought election has given all Americans an opportunity, a moment, to discuss our shared values. Yes, we’re most likely going to have divided government, one way or the other, which is the preference in America generally, and for good reason: The founders designed it that way, to make laws difficult to pass because they want us to talk to each other.

So here we are. Whatever comes next, it’s crucial that we continue the great dialogue that our founders foresaw when they declared our nation’s independence and the “self-evident” truths that all people “are created equal” and “endowed by their Creator with certain unalienable Rights, that among these are Life, Liberty and the pursuit of Happiness.”

That dialogue does not end with a hotly contested presidential election; it begins anew after the votes have been counted and a winner declared. To have that dialogue we, regardless of party affiliation, must first talk to one another, truly listen and, again, in Lincoln’s words, allow the “mystic chords of memory” to be touched “by the better angels of our nature.”

This editorial was written by the editorial board of the Dallas Morning News.

Editorial: Staying home for Thanksgiving won't kill you. COVID-19 might

The fatigue is understandable. We’re tired of all this, of wearing masks and not seeing people and weddings being canceled and is school in pe…

President Donald Trump’s disbelief at losing the election to Joe Biden is playing out in unsurprising fashion. Since Trump can’t fathom defeat…

This editorial originally appeared in the Nov. 15 Des Moines Register.

Editorial: Here's what US is losing as transition is delayed

Written by the Editorial Board of the (Minneapolis) Star Tribune.

Editorial: The coronavirus pandemic can still be controlled

‘We are not going to control the pandemic,” the White House chief of staff said on Oct. 25, admitting the Trump administration’s failure to pe…

President Donald Trump’s disbelief at losing the election to Joe Biden is playing out in unsurprising fashion. Since Trump can’t fathom defeat…

People in New York's Times Square look up at a monitor as President-elect Joe Biden addresses the nation, Saturday, Nov. 7. Democrat Joe Biden defeated President Donald Trump to become the 46th president of the United States on Saturday, positioning himself to lead a nation gripped by a historic pandemic and a confluence of economic and social turmoil..