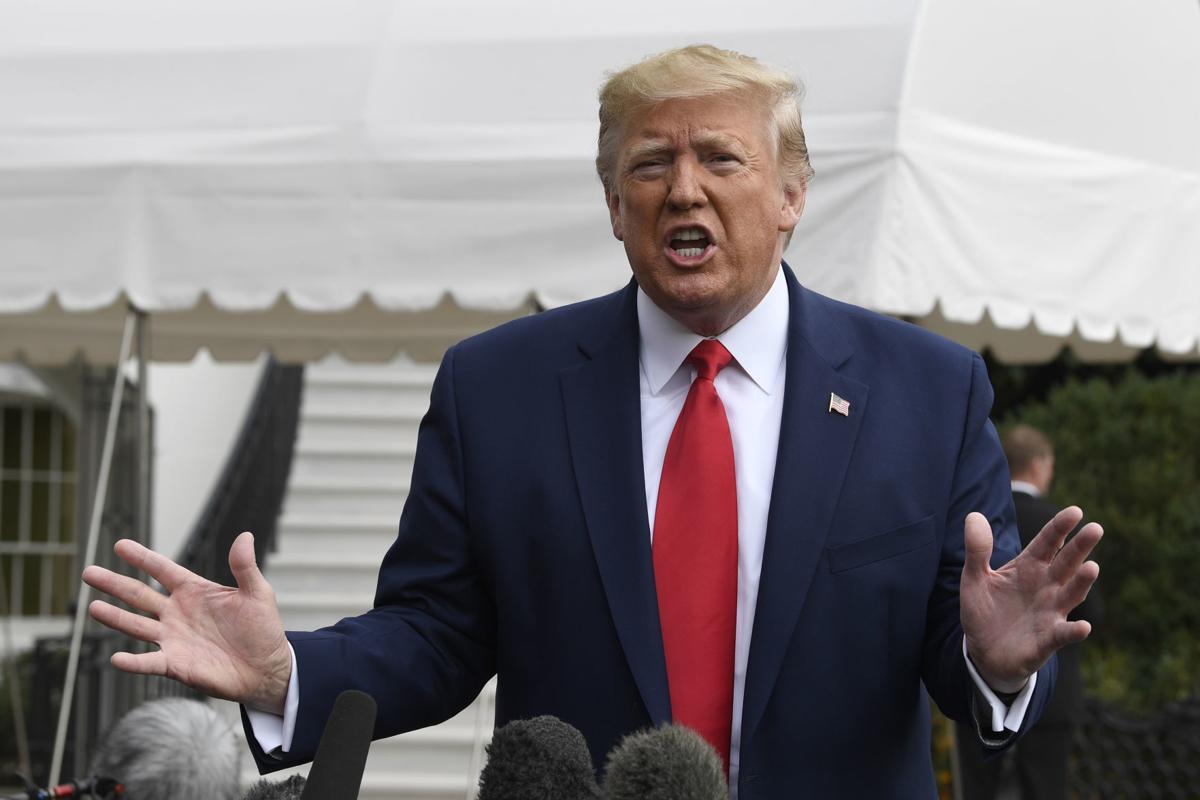 President Donald Trump talks to reporters last week on the South Lawn of the White House in Washington. 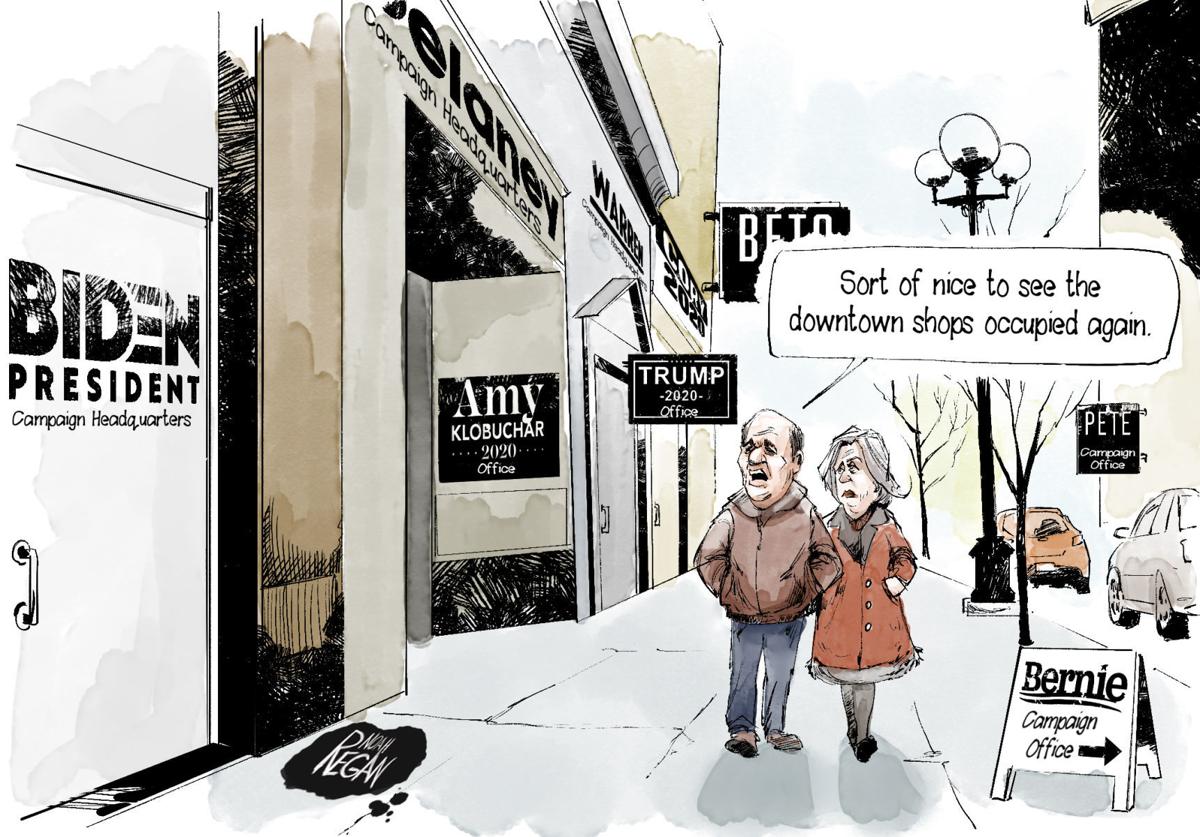 The U.S. Constitution makes no mention that a president is above the law while in office as once professed by Richard Nixon and Bill Clinton and now Donald Trump.

“When the president does it, that means that it is not illegal,” Nixon maintained in 1977, three years after resigning while facing impeachment.

The first three sections of Article 2 deal with the qualifications, election and duties of the executive branch. Section 4 states, “The President, Vice President and all Civil Officers of the United States, shall be removed from Office on Impeachment for, and Conviction of, Treason, Bribery, or other high Crimes and Misdemeanors.”

James Madison, “the father of the Constitution,” stated, “If men were angels, no government would be necessary. You must first enable the government to control the governed; and in the next place oblige it to control itself.”

Secretary of the Treasury Alexander Hamilton contended Congress “might demand secrets of a very mischievous nature.” Washington eventually provided those papers that “the public good would permit.”

President Dwight Eisenhower refused to allow advisers to testify before a Senate hearing in 1954, claiming White House conversations must remain under wraps. “Any man who testifies as to what he told me won’t be working for me that night,” he said.

Trump, claiming a “witch hunt” by congressional Democrats, has declared executive privilege at every turn. It was even invoked by his former campaign manager Corey Lewandowski — who never worked at the White House — in regard to discussions with Trump and his advisers.

Attorneys for the president have maintained in two separate cases in federal courts that a sitting president doesn’t have to comply with either state or congressional investigations into possible malfeasance.

The U.S. Attorney for the Southern District of New York declined to seek charges against “Individual 1,” presumably Trump, who Cohen said ordered him to make the hush-money payments. But Democratic New York prosecutors are doing so.

Appellate Court Judge Denny Chin asked Trump’s attorney William Consovoy about candidate Trump’s statement that he could “stand in the middle of Fifth Avenue and shoot somebody and ... wouldn’t lose voters.”

“Local authorities couldn’t investigate? They couldn’t do anything about it?” Chin asked.

“That is correct,” Consovoy said, adding, “Once a president is removed from office” he could be subject to criminal investigation. “This is not a permanent immunity.”

However, in a civil case in 1997 involving sexual harassment, Clinton v. Jones, the U.S. Supreme Court ruled, “We have never suggested that the President, or any other official, has an immunity that extends beyond the scope of any action taken in an official capacity.”

“The President asserts an extraordinary claim (that) the person who serves as President, while in office, enjoys absolute immunity from criminal process of any kind,” he wrote. “This Court cannot endorse such a categorical and limitless assertion of presidential immunity.”

In U.S. v. Nixon in 1974, the U.S. Supreme Court affirmed executive privilege, but not absolute immunity when Nixon sought to stop Congress’ access to White House tapes. It rejected Nixon’s insistence on an “absolute, unqualified Presidential privilege of immunity from judicial process under all circumstances.”

Federal District Court Judge Beryl Howell rebuked White House Counsel Pat Cipollone for a directive that no documents or testimony should be provided in the impeachment investigation.

“Congress’s need to access grand jury material relevant to potential impeachable conduct by a president is heightened when the executive branch willfully obstructs channels for accessing other relevant evidence,” she wrote.

Georgetown University law professor Randy Barnett has stated that Trump’s foes “have been alleging impeachable offenses since before President Trump took the oath of office” and now “they’re just trying to fill out the bill of particulars.”

Inevitably, these cases will reach the U.S. Supreme Court. It will decide for posterity to what extent any president — Trump and all successors — is untouchable while in office, and whether impeachment is first required as a recourse to investigate allegations of violations of the law.

COLUMN: The scoop on political spendthifts

The U.S. Department of Housing and Urban Development does an annual “point-in-time” survey to count homeless people — sheltered and unsheltered — throughout the nation on a single day in early January.

COLUMN: Tolerance not same as acceptance

This is a pivotal moment in American history when we must inspire ourselves back to the idealism that once moved us forward.

President Donald Trump talks to reporters last week on the South Lawn of the White House in Washington.