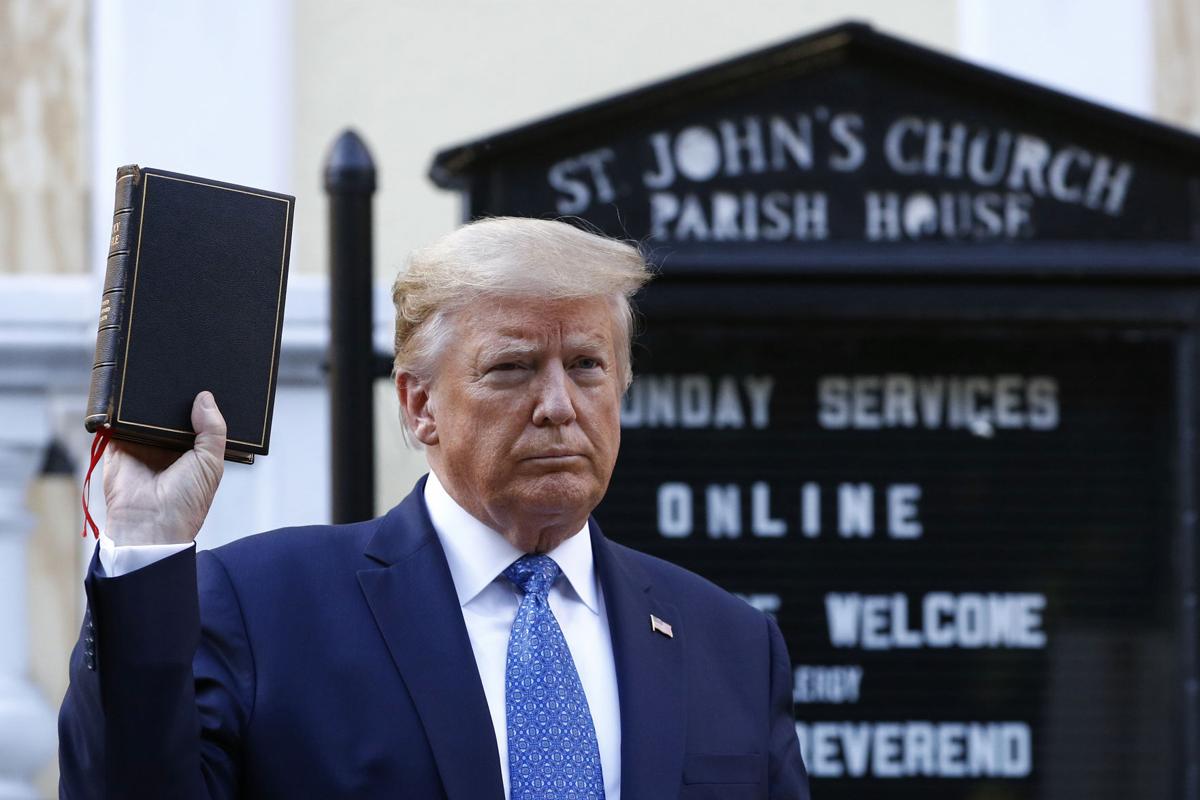 President Donald Trump holds a Bible as he stands outside St. John's Church June 1 across from the White House in Washington. 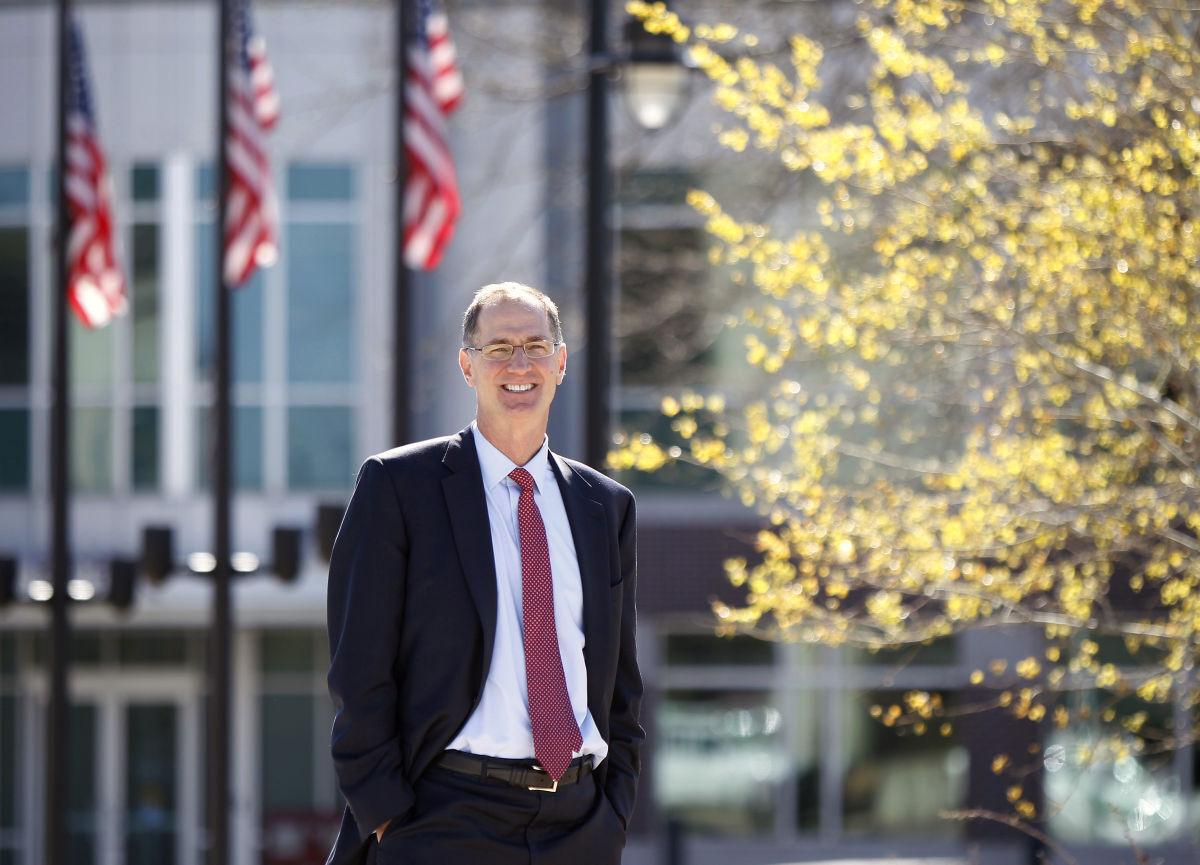 James N. Miller poses outside of The Courier in 2015.

‘Our Liberties We Prize and Our Rights We Will Maintain.” I saw these words, emblazoned on the Iowa state flag almost every day growing up. But in the 43 years since I graduated from West High School in Waterloo, I have never thought about these words as much as I have in the past few months.

I am reaching out to the people of my home state of Iowa because I believe the “liberties we prize” and the “rights we will maintain” are at greater risk than at any time in my 61-year lifetime. In fact, I believe the future of American democracy is at stake in this year’s presidential election.

My first job in government was working in President Ronald Reagan’s Office of Management & Budget to cut regulations that were stifling small businesses. After shifting my focus to national security, I served in senior positions in the Department of Defense under four secretaries of defense, three of whom were Republicans. In 2014, I was appointed to the Defense Science Board — and reappointed after President Trump took office.

I resigned publicly from the Defense Science Board to protest a June 1 politically inspired photo op featuring President Trump in front of St. John’s Church, across the street from the White House. Before moving in front of the church to pose with a Bible, Trump ordered that tear gas and brute force be used on peaceful protesters. Trump violated the protestors’ First Amendment rights and has since threatened to use military force against Americans protesting in other cities.

Our liberties and rights are preserved by brave soldiers, sailors, airmen, and Marines who are willing to put their lives on the line to protect our freedom. Yet, remarkably, according to multiple verified press reports including Fox News, President Trump has said he views those who risk everything for their country as “losers” and “suckers.” Trump has not even confronted Russian President Putin despite public reports that Russia paid bounties to the Taliban for American soldiers killed in Afghanistan. Not a single word.

President Trump seems to care even less about ordinary Americans. Trump’s failure to level with the nation about COVID-19’s dangers has resulted in the deaths of more than 215,000 Americans, with numbers rising daily. Despite only having less than 5 percent of the world’s population, America accounts for around 20 percent of the world’s deaths due to COVID-19.

As we saw during Trump’s stay at Walter Reed National Military Medical Center, he is willing to endanger the lives of his own Secret Service detail for a photo op car drive to wave at supporters. And he showed a wanton disregard for the entire White House staff when he returned from the hospital, taking off his mask despite almost certainly still being contagious. This is not what the White House staff, Iowans and all Americans need and deserve in a leader.

President Trump solemnly swore an oath to “preserve, protect and defend the Constitution of the United States.” As we saw multiple times in the first presidential debate, he is not living up to that oath, and lacks the integrity and judgment to serve as commander in chief. Trump is the first president in American history to refuse to agree to leave office peacefully if he loses the upcoming election.

Recently, I joined with nearly 500 former senior national security officials in a public letter supporting Joe Biden for president (https://www.nationalsecurityleaders4biden.com/). This group includes Republicans, independents, and Democrats, and retired generals and admirals, all of whom are deeply concerned about the future of our nation.

Throughout his career, Biden has put the national interest first. Unlike Trump, Biden has a workable plan for COVID-19, based on the advice of medical experts. And unlike Trump, Biden is a leader who respects our civic values and institutions. We need Biden’s leadership to beat COVID-19, to get the economy back on track, and to restore our liberties and maintain our rights.

America is a great and good nation. I believe Iowans will do the right thing to protect their liberties and rights, as well as their lives and livelihoods. Unlike any leader in our history, President Trump is a threat to the “liberties we prize” and the “rights we will maintain.”

I am voting for Joe Biden, and hope that you will as well.

James N. Miller, a native of Waterloo, was the undersecretary of defense for policy from 2012 to 2014 and was an appointed member of Defense Science Board from 2014 to 2020.

President Donald Trump holds a Bible as he stands outside St. John's Church June 1 across from the White House in Washington.

James N. Miller poses outside of The Courier in 2015.