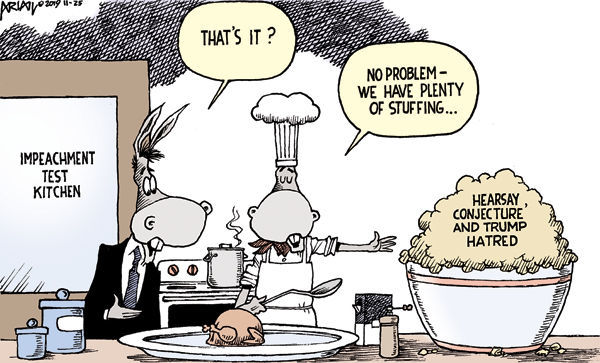 Candidate Trump’s campaign style matched his reputation. Facing opposition, his combination of narcissism and hyperbole often led to outrageous comments, name-calling, mocking and bullying. His outrageous style was an early motivation for Democrats to remove him.

House Democrats held closed hearings, only releasing information that supported their accusations. It amounted to doing political opposition research using taxpayer dollars and enhanced their strategy of dragging Trump through the mud as long as possible.

The public portion of the inquiry is in process, but Intelligence Committee Chairman Adam Schiff has his foot on the throat of any aggressive attempts by Republicans or the president to launch a maximum defense. We’re overwhelmed with information without obvious explanations or answers. Nothing is clear-cut because much of what is presented is hearsay, speculation and interpretation. Because of the nature of the evidence, the only conclusions that can be drawn have become matters of opinion.

Complicating the issue for Democrats is that there was no Ukrainian investigation, and the aid was ultimately paid anyway. It’s also inconvenient that Biden’s son was a highly paid board member of the oil company Biden rescued from the prosecutor. Complicating the issue for Republicans, Biden is now a prominent election opponent for Trump, making it easier for Democrats to claim there were impeachable campaign violations. Nothing is clear-cut, however, otherwise Schiff wouldn’t have had to create a parody of Trump’s Ukraine call if its transcript clearly supported his allegations.

While impeachment is a political process, not a criminal one, the Constitution does refer to “crimes and misdemeanors.” Criminal statutes therefore remain relevant, though not governing, and the absence of any statue violation should affect the final decision. While the process is unique to impeachment, the Constitution doesn’t declare standards of due process should be ignored. Democrats have violated due process, but how that affects the outcome remains to be seen.

There’s a huge unknown. Political allies of the Democrats are subject to investigation by Inspector General Michael Horowitz, Attorney General Bill Barr, and U.S. attorney John Durham. It’s too early to determine how those investigations will affect the House impeachment or the Senate trial.

Every statement, testimony and opinion in the Trump impeachment calls for interpretation in order to reach a conclusion. Put all of these subtle facts and nuances in a jar, shake them up, and cast them on the table. Look at all of the facts and ask yourself: Are there things done you feel were wrong? Are those things so egregious the president should be removed from office? And don’t forget to heed Alexander Hamilton’s advice in Federalist 65. He warned against insisting on perfection in our impeachable leaders. His words: “Where is the standard of perfection ever to be found?”

Perhaps Republicans will make a compelling case in the president’s favor, but at worst, there will be no clear-cut case to remove him. Democrats would have to rely on nuanced opinions to remove the president, and that won’t win the day. And, as much as Democrats wish it were so, Trump’s annoying, outrageous style and behavior, and policy disagreements, have no standing as impeachable offenses.

Steve Bakke is a Courier subscriber living in Fort Myers, Fla. He is a retired CPA and commercial finance executive.

GOT AN OPINION? LET'S HEAR IT: Join today

Conflicting alternative realities – that’s the only way to describe the Trump impeachment saga. This article is my layman’s interpretation of some things that confuse us all.

With the unpredictably outrageous Donald Trump as president, it seems to make perfect sense to have impeachment proceedings right in the middle of the Christmas season. But there are several things I find puzzling.