At a time when COVID-19, a deadly virus just like the swine flu, is spreading coast to coast and border to border, Americans should be able to rely on the advice of President Donald Trump.

Or, should we listen to scientists instead of our commander in chief?

According to the nonpartisan Pew Research Center, 86 percent of Americans are confident scientists act in the best interest of the public. Today, 64 percent have expressed “no confidence” in President Donald Trump.

In October 2009, Rush Limbaugh declared “screw you” during his radio program in reaction to Obama administration’s recommendation people get a vaccination against swine flu. On Fox News, Glenn Beck urged voters to do “the exact opposite” of scientific advisers’ recommendation. Donald Trump called into Fox News, dismissed concern about the swine flu and told host Neil Cavuto that “it’s going to go away” and “the vaccines can be very dangerous.”

As a result of lemmings following the advice of Limbaugh, Beck and Trump, research by Dr. Matthew Baum of Harvard University found Republicans were much less likely to get vaccinated. Predominantly Republican states had higher death rates than predominantly Democratic states. Sadly, 12,469 Americans died due to the swine flu (The Journal of Health Politics, Policy and Law, 2011).

As Nicholas Kristof of The New York Times reported March 7, “This is a case where toxic right-wing bluster was not only corrosive but also apparently lethal — but only to true believers.”

Based on that information, I think it’s safe to say it’s dangerous to listen to ideologues rather than scientists.

Trump’s dislike of science is quite evident: Climate change is a Chinese hoax, vaccines are dangerous and wind turbines cause cancer. He prohibited Centers for Disease Control and Prevention officials from using words like “evidence-based” and “science-based” in official documents. He’s cut funding to CDC and the National Institutes of Health while dissing the World Health Organization.

With COVID-19, who do we now need for advice, guidance and counsel? CDC, NIH and WHO. What goes around, comes around.

According to a March 8 New Yorker article, “Physicians and public health officials are dispirited by the president’s public pronouncements, saying that he has added to the danger of the crisis by minimizing its scale and the need for rigorous precautions.”

The New York Times reports “the White House instructed one of the nation’s top infectious disease experts, Dr. Anthony S. Fauci, not to say anything else without White House clearance.” Heretofore, with the SARS and Ebola outbreaks, federal scientists communicated directly with the public.

Dr. Michael Mina, epidemiologist at Harvard’s T. H. Chan School of Public Health, notes, “We need the president to put the well-being of the American people before his re-election. And that requires open discussion and accurate information.”

David Remmick of The New Yorker writes, “Has there ever been a less serious president?”

Trump’s “poisoning the well” attitude hasn’t helped. Guess who, on Feb. 24, jumped in to support Trump? Rush Limbaugh told his listeners, “I want to tell you the truth about the coronavirus. Yeah, I’m dead right on this. The coronavirus is the common cold, folks.”

The time is long overdue for Trump to stop playing politics with COVID-19 and put scientists back in charge without them seeking White House approval as to what to apprise Americans about the epidemic. I’m confident obtaining national and Iowa-based scientific information about COVID-19 at www.cdc.gov and www.idph.iowa.gov is more advisable than following the unscientific musings of Limbaugh, Beck and Trump.

Democratic presidential candidates are meeting with Iowans in front of the Feb. 3 Iowa caucuses. 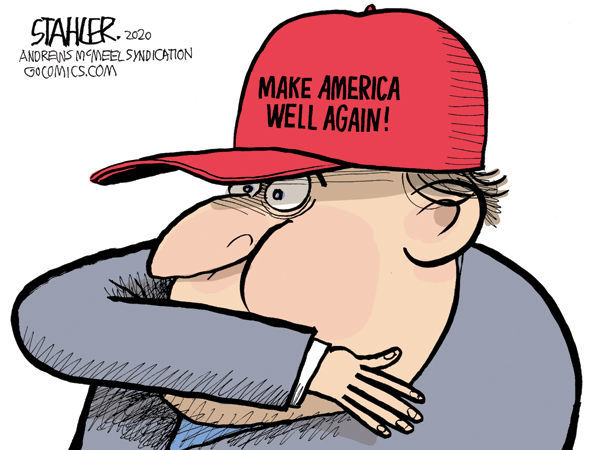