When lobsters are placed into boiling water, due to their brain structure they cannot feel pain. However, the same cannot be said when Americans witness their current president putting our democracy into hot water — close to boiling — day after day. How much more can Americans endure?

Republicans with integrity are saying “enough is enough.”

Let’s examine some of the hot water Trump has put our republic in:

1. America has endured $8.3 trillion of new federal debt since Trump took office. His tax cut has cost taxpayers $2.3 trillion and his trade war debacle has imposed a $1.3 trillion loss to the U.S. Treasury (The Balance, Politico & Forbes).

2. The conservative Wall Street Journal reported (Sept. 2) America has passed the 100% debt-to-Gross Domestic Product Index (GDP is the broadest measure of U.S. economic output); the only country in the world whose debt-to-GDP ratio is equivalent to debt-ridden Japan, Italy and Greece.

3. Sixty-nine percent of Americans say our economic situation is bad (Pew Research). Who represents the 31% of Americans who think our economy is good?

4. During Trump’s presidency the Economist Intelligence Democracy Index has downgraded America to a “flawed democracy,” citing erosion of public trust in government and elected officials.

5. Trump has not rebuked Russia for its interference in the 2016 or 2020 elections despite evidence from 17 different federal intelligence agencies (AP News).

6. Trump has, unabashedly, downgraded communities with preponderance of color and mocked people along the lines of race, ethnicity, religion, sexual orientation, disability and military service personnel who died protecting America, whom he called “suckers,” “losers,” “warmongers” and “pus——”. (Fox News).

7. ProtectDemocracy.org reports an autocratic approach to government dominates Trump’s White House and has dismantled our system of checks and balances by attacking the judiciary, withholding information from Congress, humiliating whistleblowers, firing Cabinet members who question his actions and punishing states that opposed his policies.

8. Trump knew of the COVID-19 pandemic Jan. 3, admitted to Bob Woodward (Feb. 7) the coronavirus was five times deadlier than flu, stating “I wanted to always play it down,” announced (Feb. 4) “my administration will take all necessary steps to safeguard our citizens from this threat,” yet said (March 13) “I don’t take responsibility at all.” He never established a national strategy, causing 2 million Americans to permanently lose their jobs, made nearly 1,200 misleading claims about the COVID-19 pandemic alone and brought about 200,000 deaths (rising by 1,000 deaths a day) due to unabated neglect of his duty to protect and defend Americans (Fox News, Washington Post, AP News and The Atlantic).

10. There’s been a historic 88% turnover in Trump’s Cabinet, and a record-breaking 415 political appointees have resigned or been fired.

12. Twenty percent of Trump’s 20,000-plus “alternative fact” statements were tweets; 80% were made publicly (The Hill and Washington Post).

After reading these facts, are you ready to say “I can’t take four more years of Trump?” If so, God bless America. Long live the republic! 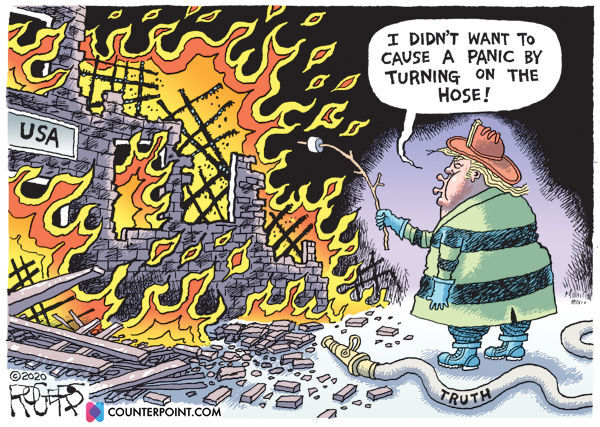