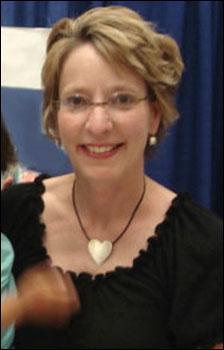 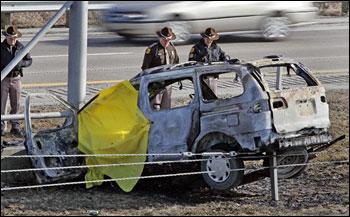 This is the scene of a fiery crash on Interstate 80 Monday morning. Authorities said the vehicle belonged to Steve Sueppel.
AP PHOTO

IOWA CITY -- The former banker police sought after finding the bodies of a woman and four children in an Iowa City home has a connection to Cedar Falls.

He graduated from the University of Northern Iowa in 1987 with a bachelor's degree in management and a concentration in finance, according to a UNI spokesman.

Authorities began looking for Sueppel, who is awaiting trial for federal bank embezzlement and money laundering charges, and this family van after finding the bodies of family members in his Iowa City home this morning.

The identities of the victims weren't available.

Police also noted a person died in a fiery van accident about 10 miles from the home. The identity of the driver wasn't available.

A 1986 wedding announcement in The Courier archives describes Steve Sueppel as the brother of Bill Sueppel, who was an assistant city attorney for Waterloo at the time. The brother later returned to his hometown of Iowa City, according to Courier archives.

A woman who answered the phone at Bill Sueppel's firm in Iowa City - Meardon, Sueppel & Downer - said the office wouldn't be issuing any statements in the matter.

Iowa City police said they were all but certain that the body in the van was that of the husband, Steven Sueppel. A lockdown for city schools and an alert for the University of Iowa were lifted after the body was found.

Police Sgt. Troy Kelsay wouldn't release the names of the victims, but he confirmed they were Sueppel's wife and children, ages 3, 5, 7 and 10. Legal documents show Sueppel was married to Sheryl Sueppel, whose age was not immediately available.

Police said the victims were found in the unlocked house Monday morning after someone called dispatchers, saying officers needed to respond to the home immediately and hung up.

Initial alerts said there had been a shooting at the home, but Kelsay said further investigation shows the deaths could have been the result of some other trauma. Autopsies for the six bodies were scheduled for Thursday.

"I'm not certain that a firearm was ever involved. Nobody reported hearing any shots fired," Kelsay said.

The family's van crashed and caught fire on Interstate 80 about nine miles from the home. No other vehicles were involved.

"It's not possible to do an ID short of an autopsy. The fire was that intense," Kelsay said.

He added, however, that "if I was a betting man I would comfortable betting a fair chunk of money" that the body was Steven Sueppel's.

The slayings do not appear to be random, Kelsay said.

"It's certainly a tragedy, whoever is responsible for it," he said. "… This does not appear to be a random crime. It appears that possibly it is the work of Steven Sueppel."

Court records show that Steven Sueppel was indicted last month on charges of stealing about $560,000 from Hills Bank and Trust in Johnson County, where he was vice president and controller.

Steven Sueppel, 42, pleaded not guilty to embezzlement and money laundering in U.S. District Court and was released on a $250,000 personal bond. The government was also seeking the forfeiture of the money he was accused of stealing.

His trial was scheduled for April 21.

Steven Sueppel's attorney in that case, Leon Spies, said he had heard of the deaths.

"I had great affection for Steve and his family. This is an unimaginable professional and personal tragedy for a lot of people," he said.

The bank issued a statement expressing "our heartfelt sadness for the events that occurred earlier today," and said officials' thoughts and prayers were with the family.

Ken Kuntz, a priest at St. Mary's Catholic Church in Iowa City, said the Sueppels spent Sunday morning attending an Easter service at his church. Kuntz said he could not have imagined one day later he would be consoling the family's relatives, who he described as "perplexed and deeply saddened."

Kuntz said Steven Sueppel grew up attending the parish, got married there and had his four children baptized there. He also had been attending adult classes as his son prepared to take his first communion.

Kuntz said he did not notice any signs of distress, and neither did relatives.

"That's why it's such a major devastating blow to his family and to the community," Kuntz said.

"I know that Steve loved his family, loved his wife, loved his children," he said. "But personally I would be convinced that he did not do this out of malice."

Three young girls who live in the suburban development and knew the family wrote chalk messages on the sidewalk in the area that said, "We are going to miss you guys," and "I wish that this day never came."

Tropical Storm Edouard could form in the Atlantic this week

This is the scene of a fiery crash on Interstate 80 Monday morning. Authorities said the vehicle belonged to Steve Sueppel.
AP PHOTO
© Copyright 2020 The Courier, 100 E. 4th St. Waterloo, IA | Terms of Use | Privacy Policy
Powered by BLOX Content Management System from TownNews.com.
You don't have any notifications.