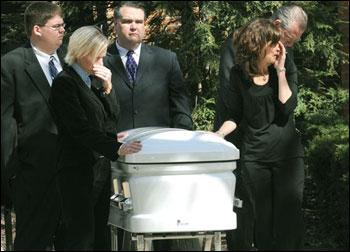 Pall bearers of one of the Sueppel children, fight back tears outside St. Mary's Church, after the funeral mass of Steven Sueppel and his wife Sheryl Sueppel, and their children Eleanor Sueppel, Ethan Sueppel, Mira Sueppel and Seth Sueppel, Saturday March 29, 2008 in Iowa City, Iowa.
AP PHOTO/Steve Pope 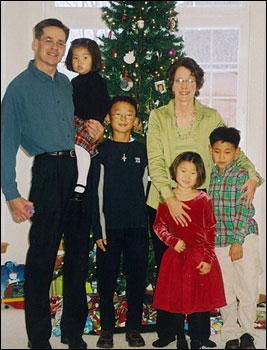 About 1,000 people attended a Catholic funeral Mass for the Sueppels and their four children, nearly a week after police say Steven Sueppel killed his wife and children and then took his own life.

Steven Sueppel, 42, his wife, Sheryl, 42, and their children, Ethan, 10, Seth, 8, Mira, 5, and Eleanor, 3, died late Easter Sunday night or early the next morning in what police have said was a murder-suicide.

Sueppel is believed to have beat his wife and children to death, likely with a baseball bat, before killing himself in a high-speed crash on Interstate 80 early Monday morning.

Six caskets containing the bodies of Sueppel and his family rested end-to-end at the front of the church. Flowers and a photo of each family member sat next to each casket. Behind the caskets stood two enlarged family photos, including one of the family in front of a Christmas tree.

As mourners entered the church, many walked to the front, slowly passing by the closed caskets. Some reached out to touch them. Others crossed themselves and knelt before each casket in prayer. It seemed as if everyone who entered the church was greeted by someone with a hug or a comforting pat on the shoulder. Many dabbed tears from their eyes as they entered the sanctuary, which was awash in reds, greens, yellows and blues from the sun shining through the stained-glass windows.

The Rev. Kenneth Kuntz said the events of last week are "beyond our ability to comprehend.

"No words can describe the depth of emotion we feel in our hearts," Kuntz said.

He briefly focused on the problems facing Steven Sueppel, who had been indicted last fall on federal charges accusing him of embezzling nearly $560,000 from Hills Bank & Trust, where he once worked.

"The scourge of mental illness leaves us bewildered, confused and even angry," Kuntz said.

Despite Sueppel's actions, Kuntz said he knew Sueppel was committed to his family.

"I don't know why or how Steven could do what he did," Kuntz said. "But I do know he loved his wife and children."

Police said Sueppel left a lengthy note at his home explaining his actions and his life. He also left phone messages early Monday morning at his home, the bank office where he once worked and at the law office of his father and brother in Iowa City, police said.

He made a 911 call to police at about 6:30 a.m. telling police to go to his home. Minutes later, he crashed the family van into a concrete abutment along I-80 east of Iowa City, killing himself.

The question Dr. Fauci wants you to consider this Thanksgiving

The question Dr. Fauci wants you to consider this Thanksgiving

Pall bearers of one of the Sueppel children, fight back tears outside St. Mary's Church, after the funeral mass of Steven Sueppel and his wife Sheryl Sueppel, and their children Eleanor Sueppel, Ethan Sueppel, Mira Sueppel and Seth Sueppel, Saturday March 29, 2008 in Iowa City, Iowa.
AP PHOTO/Steve Pope

Steven and Sheryl Sueppel and their four children, from left, Eleanor, Ethan, Mira and Seth.
AP PHOTO
© Copyright 2020 The Courier, 100 E. 4th St. Waterloo, IA | Terms of Use | Privacy Policy
Powered by BLOX Content Management System from TownNews.com.
You don't have any notifications.