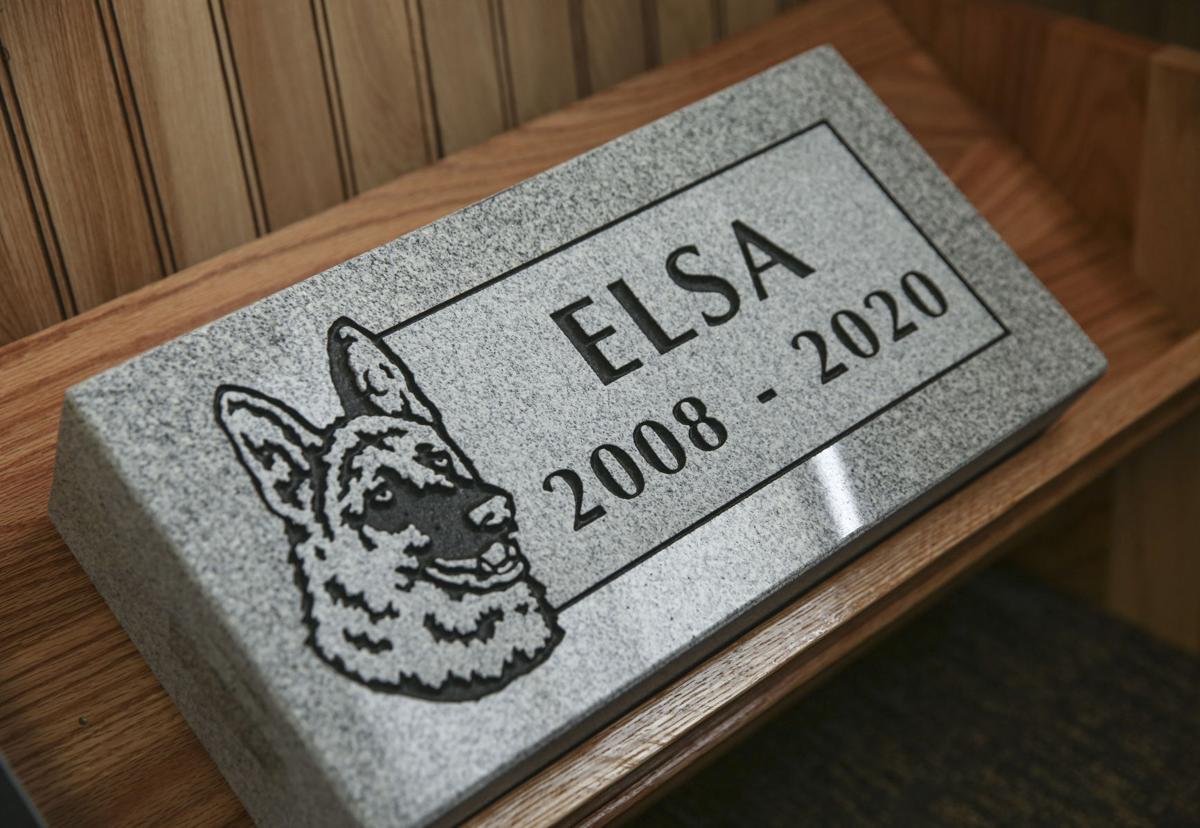 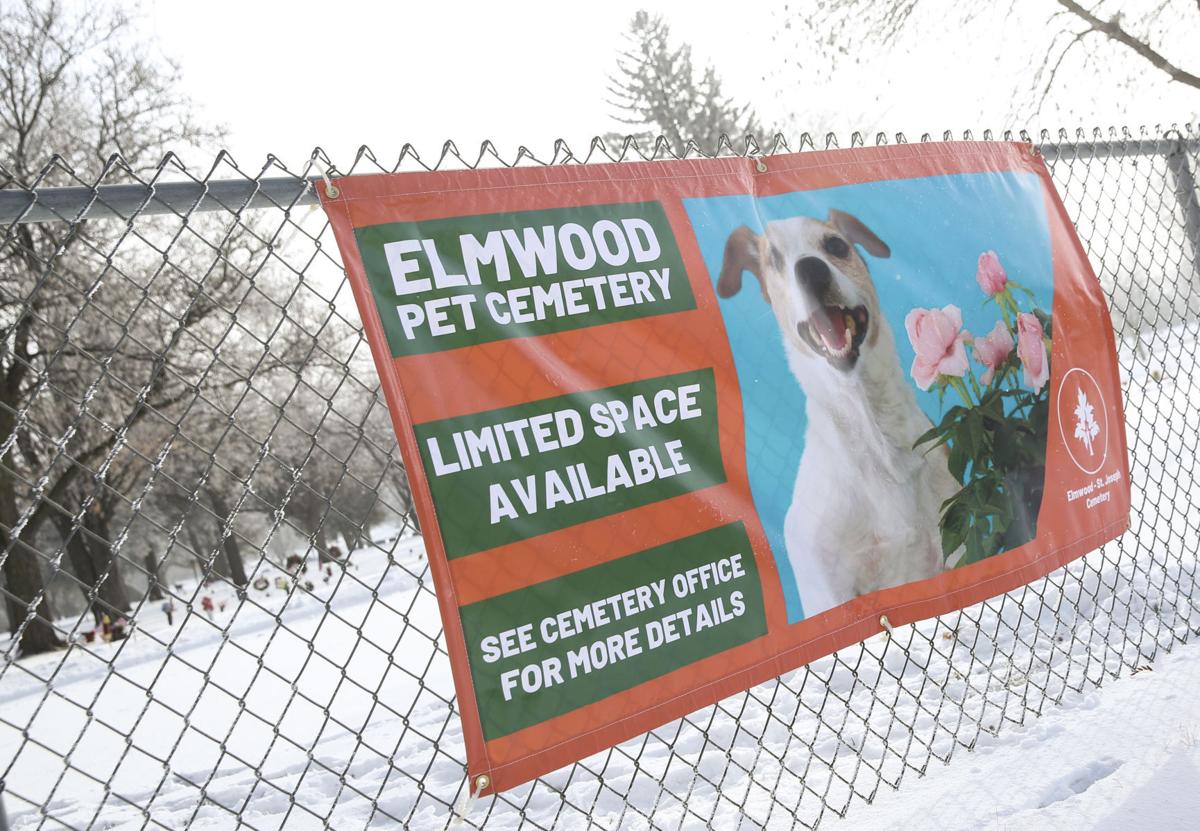 Elmwood-St. Joseph Municipal Cemetery in Mason City, where pet owners buy a plot and headstone for the cremated remains of a beloved animal.

MASON CITY — Almost as soon as Tyler Anderson took over as manager of Mason City’s Elmwood-St. Joseph Cemetery a year ago, he said he heard a common refrain of people inquiring about pet burials.

They wanted to know if there was a final resting place for Fido, Fluffy and Bugs somewhere inside the gates of the graveyard. In a few instances, Anderson said some folks even asked if they could be buried with their pets, which he said is actually illegal in the state of Iowa.

After enough of those questions, Anderson started to think seriously about designating a section at Elmwood-St. Joseph for pets. He noticed year-over-year positive growth for the pet industry and saw figures that showed almost 85 million American households own a pet (according to a 2018 figure from the American Pet Products Association). That finding led to more research and reaching out to pet service providers in the area.

“We’ve shifted our mentality, our slogan, our tagline,” Anderson said. “We want to be able to celebrate life. It’s not a set alone cemetery. It’s a part of our cemetery. Set aside strictly for pets.”

According to Anderson, the process itself took a number of months of consulting with the Department of Agriculture and Land Stewardship, the Department of Public Health and even pre-existing pet cemeteries across the state to get a sense of how they do things.

“It was a solid three to four month process getting all the approvals,” Anderson said.

One long-running pet cemetery in Iowa is the Loving Rest Pet Funeral Home in Indianola that has been around since 1997. Abby Martens works at Loving Rest with her dad, Jim Johnson, who transitioned from a career in roofing to a career in pet burials after going through the aging process with a beloved family pet.

“There weren’t a lot of options for having your pet cremated or buried and he wanted a choice that we felt was safe for our pet that was aging,” Martens said. So her dad sold the roofing business and started the funeral home.

On the Loving Rest website, there are recent obituaries for dogs and cats with full family names. “Now he chases the stars in the sky where he waits for us to come for him,” reads one such obit.

The funeral home provides not just cremations but burials as well.

“We currently bury everything from, we have a turtle here, we used to bury horses but our horse garden is full,” Martens said.

Per Martens, Loving Rest does about 25 pet burials a year, is on two acres of land and has multiple garden options. She said that folks in the area feel very fortunate to have such an option for paying final respects to their pets.

“People are pretty grateful to know their pet will be somewhere safe,” she said.

Anderson said that as long as it’s a pet, that’s been cremated, people can bring it to Elmwood-St. Joseph for burial.

“If someone wants a horse, we might have to have them buy two plots,” he said.

In the Mason City area, a number of pet clinics send recently deceased pets away to be cremated before returning the remains to owners. Makenzie Jackson, a vet assistant at Animal Medical Hospital, said that that process is a weekly occurrence at her office.

Dr. Jeffrey Cornick, who runs Pioneer Animal Hospital, said he’s noticed that more and more people are taking the ashes back with them after their pets have been cremated so he thinks it can only be a positive for pet owners to have new burial opportunities.

“I think that’s a great thing that they have that option available to them,” he said.

Even if pet services become a smashing success at Elmwood-St. Joseph, Anderson said that he and his crew won’t lose focus on what it is that they already do.

“(It) won’t get in the way of our primary role,” as he phrased it. “We believe we can pivot to the pet section as well. We feel we’re not reinventing the wheel.”

Putting some mussel into it
0 comments

Watch Now: Seniors struggle to get the vaccine

Watch Now: Seniors struggle to get the vaccine

Muff Waders are bib overalls (they can be used like waders to some extent, but they are not waterproof) that have a built-in beer cooler on the chest, large pockets on the legs to hold liquor bottles and an attached bottle-opener.

Eric Sauser, his wife wrote, was "preceded in death by billions, including his dog Harvey who most of us loved to hate. We are confident they are joyfully reconnecting ..."

Some of the most horrific images from early in the COVID-19 pandemic came from places like Bergamo, Italy and New York City, where hospitals w…

Here’s what alive and dead at the Iowa Legislature

Here’s how some issues have fared so far this session in the Iowa Legislature:

Murphy: One year of COVID: a somber anniversary and a moment of hope

WATCH NOW: Reynolds uncertain of plans for $1.3B in federal COVID funds for Iowa

SIOUX CITY -- Gov. Kim Reynolds has made it abundantly clear she's not happy with the $1.9 trillion pandemic relief bill that passed the U.S. …

DES MOINES — Legislation seeking to reinstate a limited death penalty, repeal the state’s bottle deposit law and require young moped riders to wear helmets fell by the wayside while Republicans voted Thursday to sanction high-tech companies for censoring social media free speech on a critical day for bills to win approval or languish for the 2021 session.

Murphy: One year of COVID: a somber anniversary and a moment of hope

Elmwood-St. Joseph Municipal Cemetery in Mason City, where pet owners buy a plot and headstone for the cremated remains of a beloved animal.