Become a Member
Read Today's E-edition
Share This
Iowa redistricting: A little something for everyone
0 comments
Share this

DES MOINES — Proposed new political maps in Iowa would dramatically alter the state’s four Congressional districts and 150 statehouse districts for the next 10 years.

The potential political impact can already be measured at the Congressional level, where both Democrats and Republicans stand to benefit.

And the maps provide yet another illustration of Iowa’s declining rural and surging suburban populations.

But are these proposed maps destined to guide Iowa politics for the next decade? Or are they destined for rejection and the allure of something better? Those questions will not be answered until state lawmakers convene for a special session of the Iowa Legislature on October 5 at the Iowa Capitol.

Regardless of whether these maps are approved, they provide another illustration of how Iowa’s population — like so many other states’ — is shifting from rural to urban and suburban areas.

Iowa’s Congressional districts must be as equal as possible in population. In drawing the districts, the state’s nonpartisan Legislative Services Agency needed 44 counties in western Iowa’s 4th District to match the population total of just 12 counties in eastern Iowa’s 1st District.

“The one thing I can point to, whatever the final Congressional map might be, is the continuing thinning out of rural Iowa,” said Dennis Goldford, a political science professor at Drake University. “Applied to the new state legislative maps, we’re seeing a strong concentration of population in urban areas, exacerbating the rural-urban political and cultural divide: a lot of land area containing few people in the former, and not much land area containing a lot of people in the latter.”

Meantime, a dive into some voting data behind the proposed maps illustrates their potential effects.

At the Congressional level, the biggest changes would come in eastern Iowa. If these proposed maps are approved — and there is far from any guarantee they will — the 1st and 2nd Congressional districts will look nothing over the next decade like they did during the previous one.

The new 1st District would retain just two of the same counties it contained from 2012-2021: Linn and Jones. The other 10 counties — yes, it would also shrink to a mere 12 counties — would be all new.

And geographically, the 1st and 2nd districts would essentially make north-south swaps. The 1st would become a more compact southeastern Iowa district, and the 2nd a more expansive and more heavily northeastern district, stretching from the northern border with Winneshiek and Allamakee counties to as far south as Wapello and Jefferson counties.

“Obviously the flip in (Iowa-1) and (Iowa-2) in terms of geographic location as well as the change in size for both districts (stood out),” Larimer said.

Presidential voting numbers from the 2020 elections in those counties suggest a similar Democratic boost in the new 1st. An analysis from Dave Wasserman of the national Cook Political Report showed that by using the presidential vote in the counties involved, the current 1st District went for Republican Donald Trump by 3.4 points in 2020, but the proposed counties for a new 1st District would have given the district to Democrat Joe Biden by 8.7 points, a massive 12-point swing to Democrats.

But that comes with a trade-off, as the proposed new 2nd District would build upon momentum that has been building for Republicans in its current version.

Under the proposal, the 2nd District’s political leaning would essentially swap, from a 2.8-point Democratic advantage to a 2.2-point Republican edge. In terms of pure voter registration numbers, the district would go from Democrats having a 12,789-voter advantage to Republicans gaining the upper hand by 9,972 voters.

“(Iowa-1) shrank geographically because it picked up Johnson and Scott Counties while keeping Linn,” Hagle said. “Those more populous counties forced more rural counties to be left to (Iowa-2).” 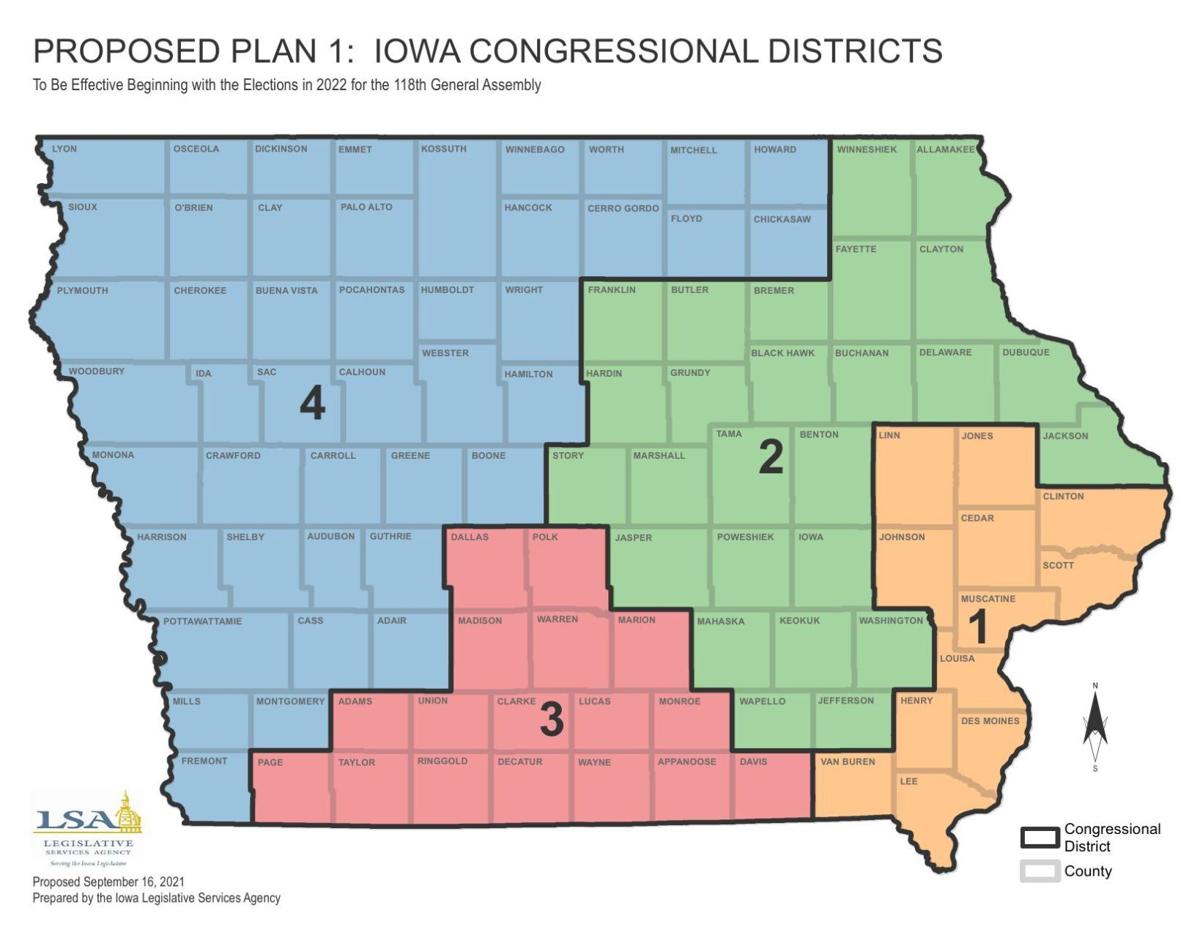 Central Iowa’s 3rd District would improve slightly for Democrats, moving their voter registration advantage there from just under 1 percentage point to just over 2 points. Perhaps just as important, Polk County would become an even bigger share of the overall district, from 56.1% of its registered voters to 60.3%. This is noteworthy because when Democrats win the district, they typically do so by only winning Polk County and driving up their margins there, while attempting to minimize their deficits in all of the other counties.

Western Iowa’s 4th District, a longtime conservative stronghold (see: King, Steve) would get even more Republican, and it would also get bigger. The proposed new 4th District would be 44 counties, pushing close to half of the state. Geographically, it would span as far northeast as Howard and Chickasaw counties, cut the state diagonally and include Fremont, Mills and Montgomery counties in the southwest corner. 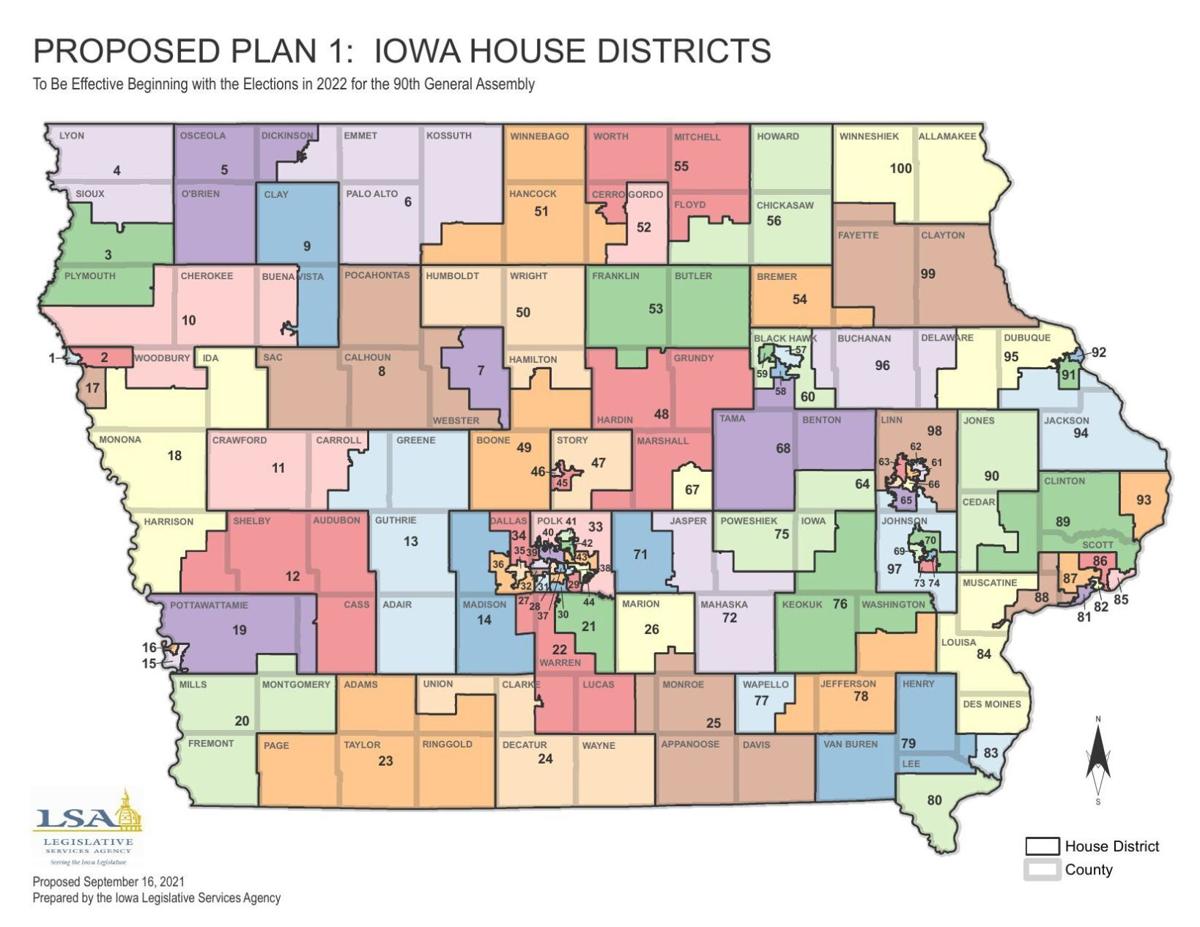 Larimer and Hagle said they believe the proposed maps would create two consistently competitive districts — the 2nd and 3rd — while the 4th would remain a Republican lock and the 1st a strong Democratic district.

Then there is the matter of the 150 statehouse districts: 100 in the Iowa House and 50 in the Iowa Senate. As it regularly does, the redistricting process has tossed many sitting state lawmakers into the same, newly proposed district.

Senate staff members did not respond to requests for similar information.

“Our redistricting method doesn’t protect incumbents, and … it often forces change among the legislators (that) can be a good way to shake things up and get new folks in the legislature,” Hagle said. “Experience is good, but you don’t want things to get stale.” 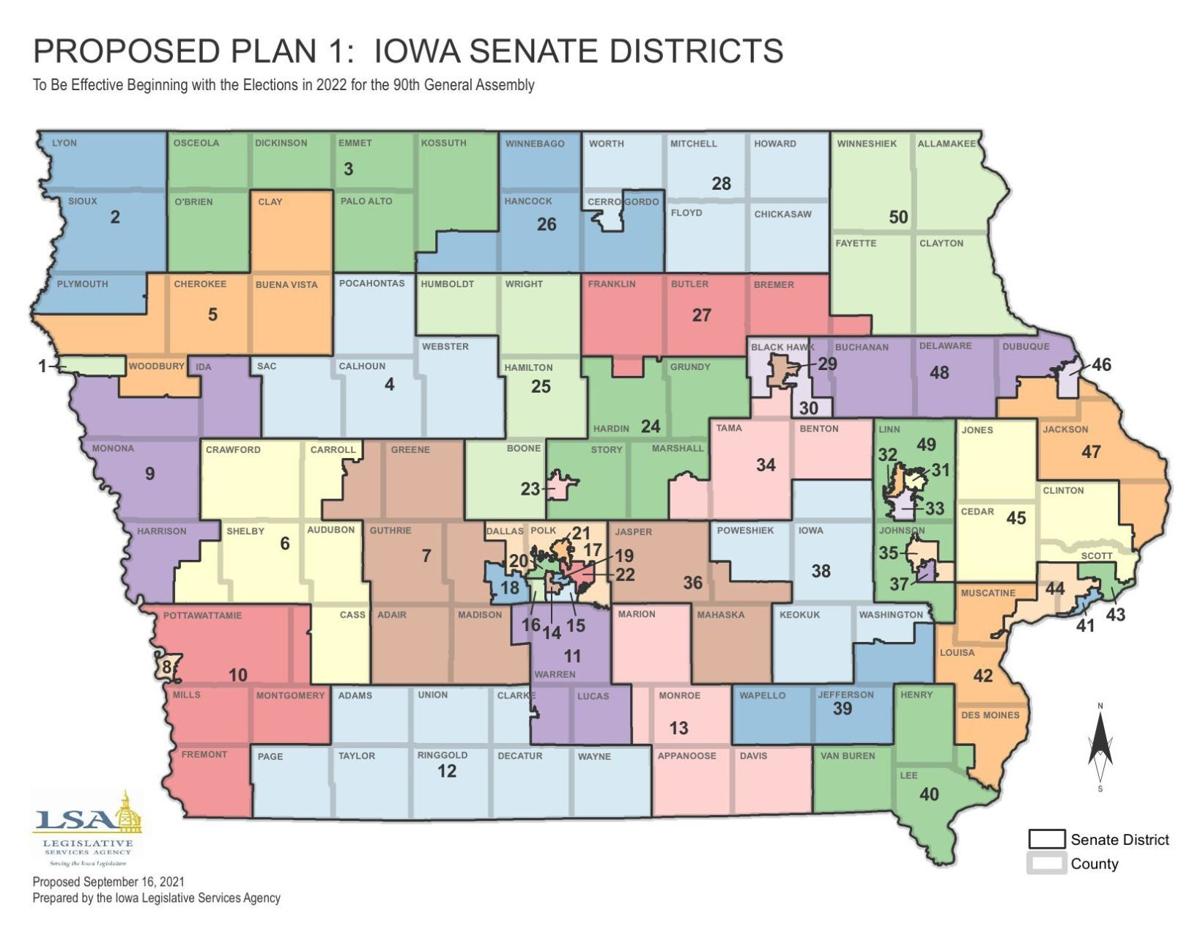 If the second proposal is rejected, lawmakers must approve LSA’s third proposal — but legislators also would be able to amend those maps.

Iowa Senate Republicans all voted to reject the first set of proposed maps that would redraw statehouse and Congressional boundaries for the next 10 years.