Become a Member
Read Today's E-edition
Share This
From 9/11's ashes, a new world took shape. It did not last.
0 comments
Share this

In the ghastly rubble of Ground Zero's fallen towers 20 years ago, Hour Zero arrived, a chance to start anew.

In Iran, chants of "death to America" quickly gave way to candlelight vigils to mourn the American dead. Vladimir Putin weighed in with substantive help as the U.S. prepared to go to war in Russia's region of influence.

Libya's Moammar Gadhafi, a murderous dictator with a poetic streak, spoke of the "human duty" to be with Americans after "these horrifying and awesome events, which are bound to awaken human conscience."

From the first terrible moments, America's longstanding allies were joined by longtime enemies in that singularly galvanizing instant. No nation with global standing was cheering the stateless terrorists. How rare is that?

Too rare to last, it turned out.

Civilizations have their allegories for rebirth in times of devastation. A global favorite is that of the phoenix, a magical and magnificent bird, rising from ashes. In the hellscape of Germany at the end of World War II, the concept of Hour Zero, or Stunde Null, offered the opportunity to start anew.

For the U.S., the zero hour of Sept. 11, 2001, meant a chance to reshape its place in the post-Cold War world from a high perch of influence and goodwill. This was only a decade after the Soviet Union's collapse left America with both the moral authority and the military and financial muscle to be unquestionably the lone superpower.

Those advantages were soon squandered. Instead of a new order, 9/11 fueled 20 years of war abroad. In the U.S., it gave rise to the angry, aggrieved, self-proclaimed patriot, and heightened surveillance and suspicion in the name of common defense.

It opened an era of deference to the armed forces as lawmakers pulled back on oversight as presidents gave primacy to the military over law enforcement in counterterrorism. It sparked anti-immigrant sentiment, primarily directed at Muslim countries, that lingers today.

What most nations agreed was a war of necessity in Afghanistan was followed two years later by a war of choice as the U.S. invaded Iraq on false claims that Saddam Hussein was hiding weapons of mass destruction.

Thus opened the deep, deadly mineshaft of "forever wars." Convulsions ran through the Middle East and U.S. foreign policy — long a force for ballast — gave way to a head-snapping change from Bush to Obama to Trump. Trust in America's leadership and reliability waned.

Other parts of the world were not immune. Far-right populist movements coursed through Europe. Britain voted to break away from the European Union. China steadily ascended in the global pecking order.

Now, President Joe Biden is trying to restore trust, but there is no easy path. He is ending war, but what comes next?

In Afghanistan in August, the Taliban seized control with menacing swiftness as the Afghan government and security forces that the U.S. and its allies had spent two decades trying to build collapsed. No steady hand was evident from the U.S. in the disorganized evacuation of Afghans desperately trying to flee the country.

In the United States, the 2001 attacks had set loose a bloodlust cry for revenge. A swath of American society embraced the binary outlook articulated by Bush — "Either you are with us, or you are with the terrorists" — and has never let go of it.

Factionalism hardened, in school board fights, on Facebook posts, and in national politics, so that opposing views were treated as propaganda from mortal enemies. The concept of enemy also evolved, to include immigrants as well as terrorists.

The patriot under threat became a personal and political identity. Trump would harness it to help him win the presidency.

For the U.S., the presidencies since Bush's wars have been marked by an effort to pull back the military from the conflicts of the Middle East and Central Asia.

The perception of a U.S. retreat has allowed Russia and China to gain influence in the regions and left U.S. allies struggling to understand Washington's place in the world. The notion that 9/11 would create an enduring unity of interest to combat terrorism collided with rising nationalism and a U.S. president, Trump, who spoke disdainfully of the NATO allies that in 2001 had rallied to America's cause.

To be sure, the succession of U.S. presidents since 9/11 scored important achievements in shoring up security, and so far U.S. territory has remained safe from more international terrorism anywhere on the scale of that Sept. 11.

Globally, U.S.-led forces weakened al-Qaida, which has failed to launch a major attack on the West since 2005. The Iraq invasion rid the world of a murderous dictator in Saddam.

Yet deadly chaos soon followed his overthrow. The Bush administration, in its nation-building haste, had failed to plan for keeping order, leaving Islamist extremists and rival militias to fight for dominance.

Today, the legacies of 9/11 ripple both in obvious and unusual ways.

Most directly, millions of people in the U.S. and Europe go about their public business under the constant gaze of security cameras while other surveillance tools scoop up private communications. The government layered post-9/11 bureaucracies on to law enforcement to support the expansive security apparatus.

Militarization is more evident now, from large cities to small towns that now own military vehicles and weapons that seem well out of proportion to any terrorist threat. Government offices have become fortifications; airports a security maze.

But as profound an event as 9/11 was, its effect on how the world has been ordered was temporary and largely undone by domestic political forces, a global economic downturn and now a lethal pandemic.

Osama bin Laden has been dead for a decade. Saddam was hanged in 2006. The forever wars now are over or ending. The days of Russia tactically enabling the U.S., and China not standing in the way, petered out.

Only the phoenix lasts.

Photos: 20 images that documented the enormity of 9/11

Complete coverage: How 9/11 changed America, and the world 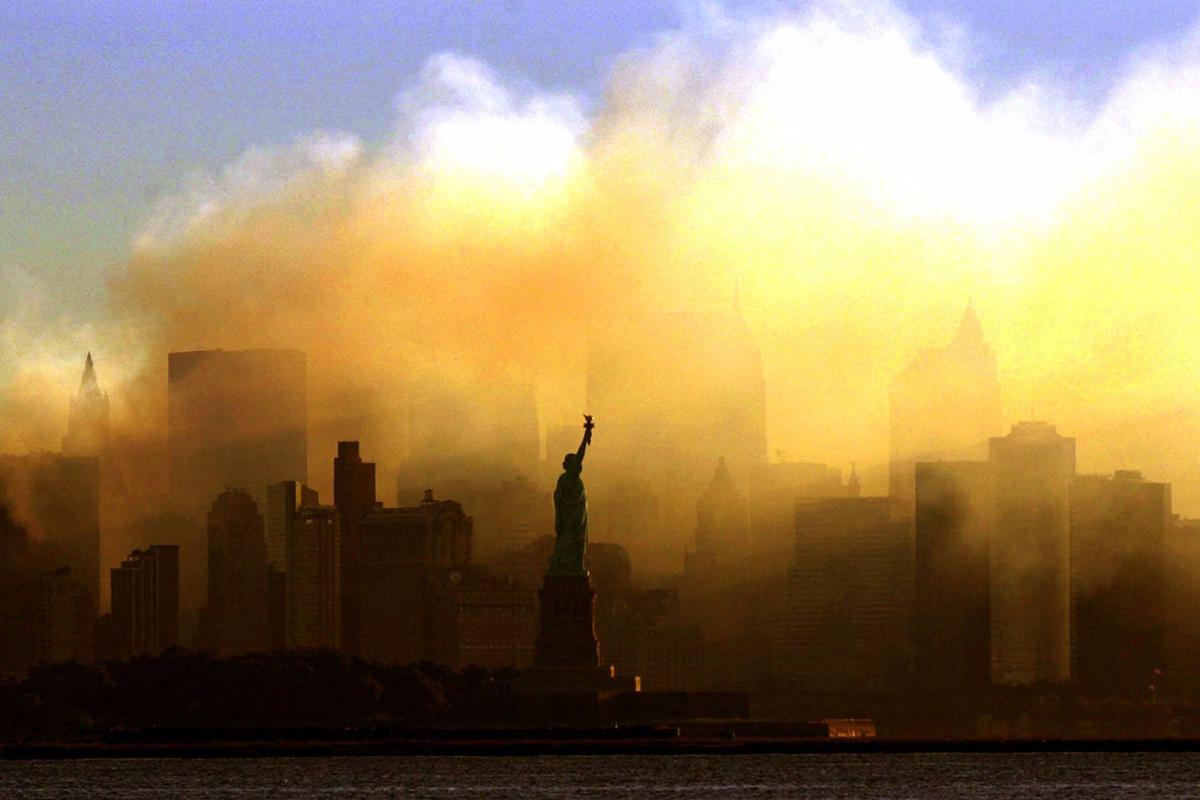 FILE - In this Saturday, Sept. 15, 2001 file photo, the Statue of Liberty stands in front of a smoldering lower Manhattan at dawn, seen from Jersey City, N.J. The Sept. 11, 2001 terrorist attacks on the United States nearly 20 years ago precipitated profound changes in America and the world. 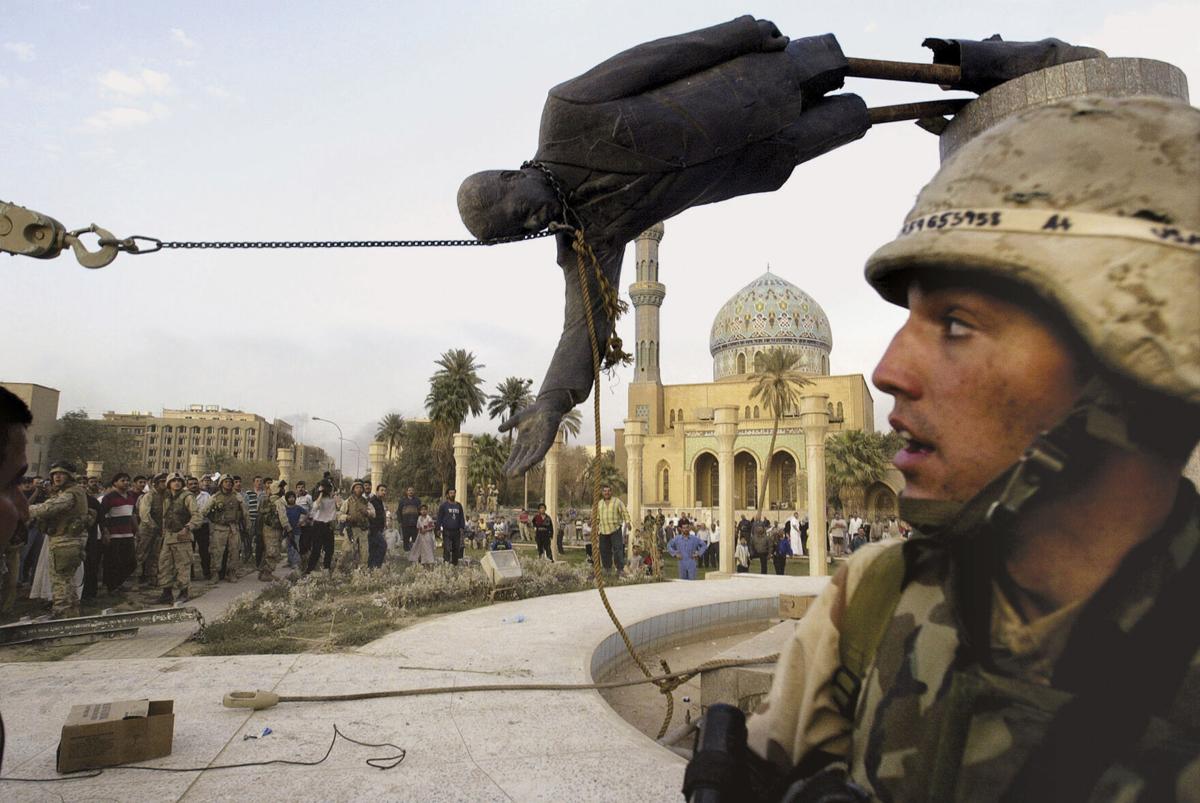 FILE - Iraqi civilians and U.S. soldiers pull down a statue of Saddam Hussein in downtown Baghdad, in this April 9, 2003 file photo. The U.S. invaded Iraq on false claims that Hussein was hiding weapons of mass destruction. 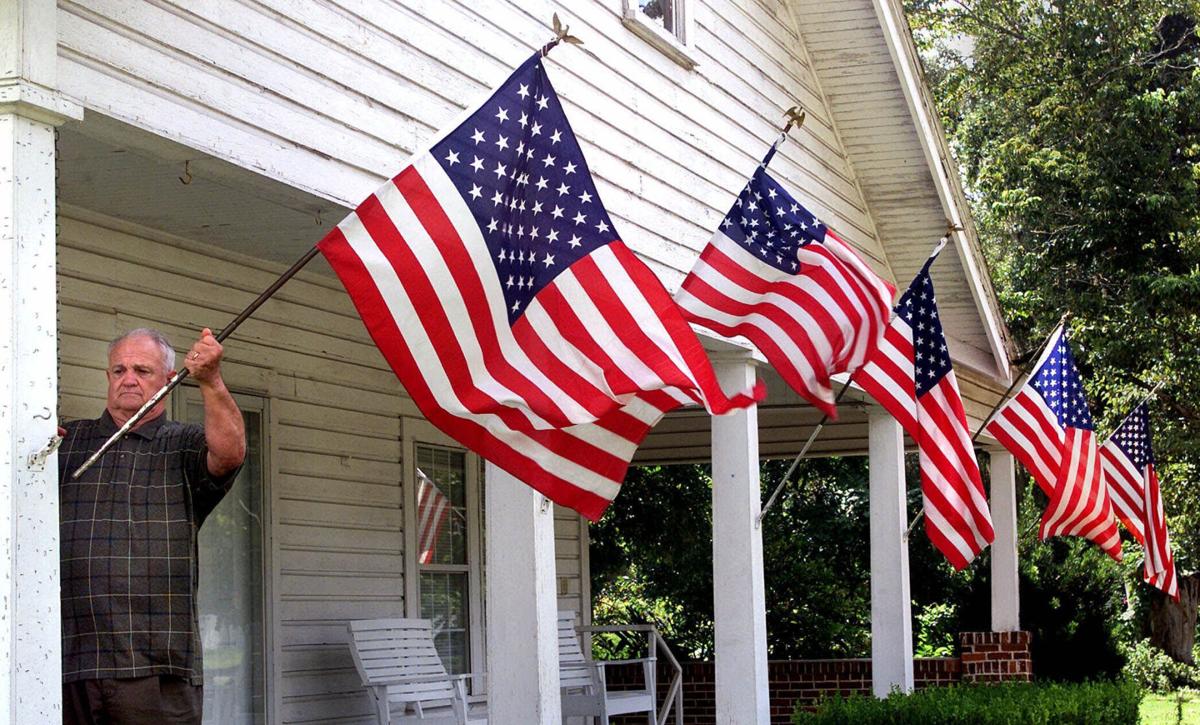 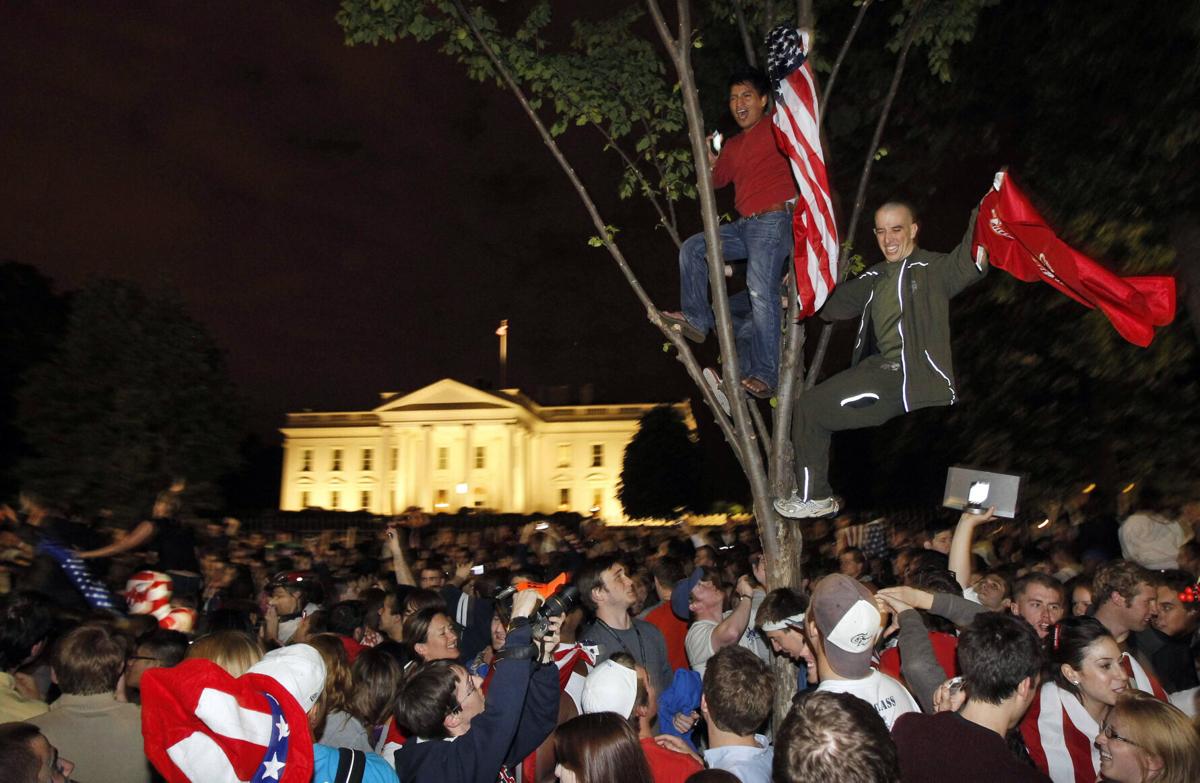 FILE - In this Monday, May 2, 2011 file photo, crowds climb trees and celebrate in Lafayette Park in front of the White House in Washington after President Barack Obama announced that Osama bin Laden had been killed. 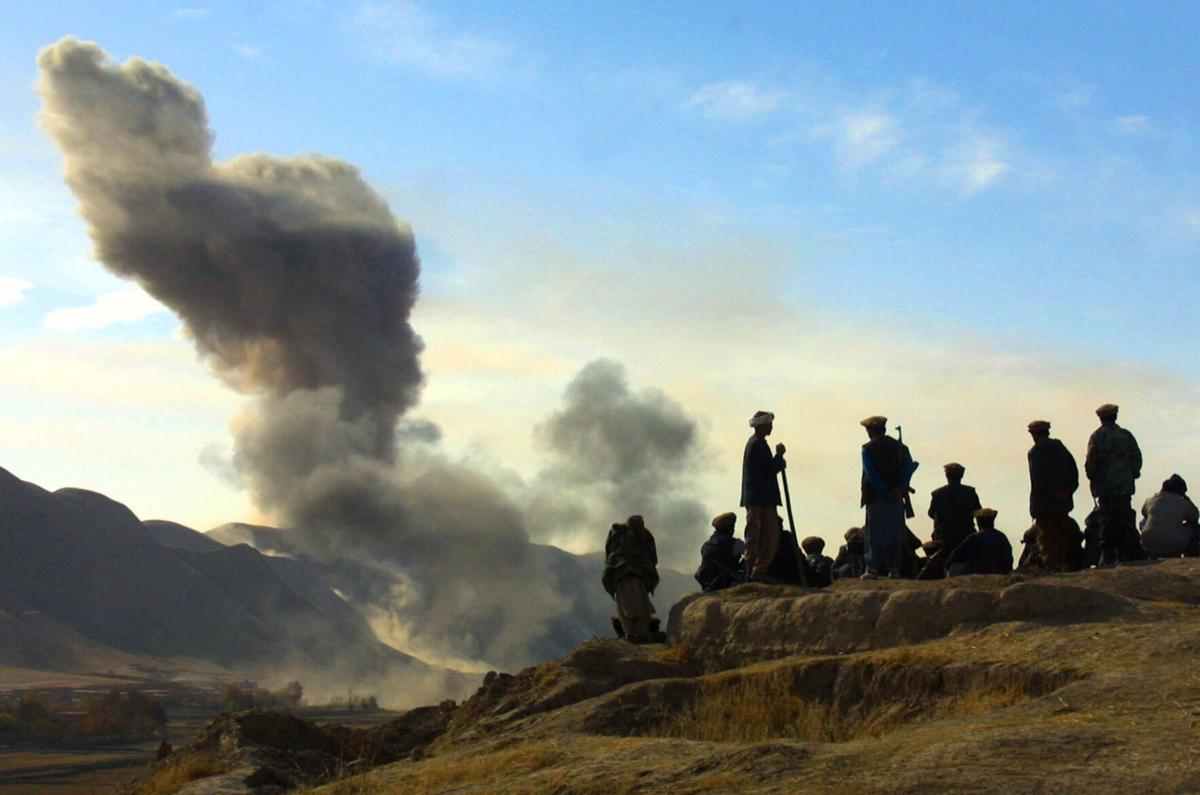