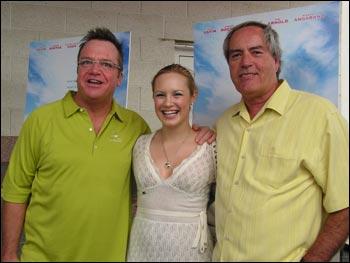 From left, Tom Arnold, Danielle Savre and Powers Boothe posed for members of the Iowa media Sunday outside a screening of "The Final Season" at Galaxy Cine 16 in Cedar Rapids.
MARY STEGMEIR / COURIER STAFF WRITER 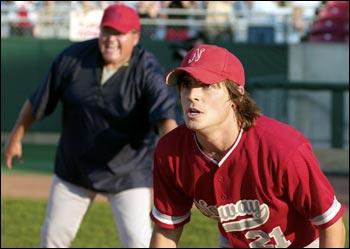 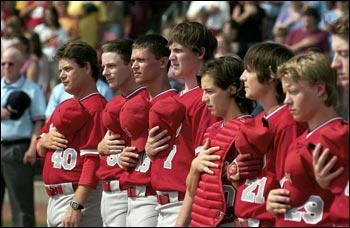 Like many of the 600 people invited to take a sneak peek at the film, opening in theaters Friday, the Norway couple knew how the movie would end.

But hometown pride - and a healthy dose of excitement - brought the Boddickers to Galaxy Cine 16 two hours before showtime.

"It's just a real special feeling that our story is being told and people all across the United States are going to see it," said Vicki Boddicker. "Hopefully they will all experience the emotions that we went through."

The film depicts the last season of Norway's high school baseball team. Over the previous 25 years, the Tigers had captured the state championship 19 times under the legendary Coach Jim Van Scoyoc, played by Powers Boothe. But in 1991town officials announced the 100-student school would merge with a nearby school the following academic year, ending the tradition of Tigers baseball. Officials then hired a new head coach, Kent Stock (Sean Astin), and players and fans entered the team's final season skeptical of their chances on the diamond.

"When we knew we were losing the school, it was like we lost a part of ourselves," said Gary Boddicker, city superintendent.

That attitude was evident on the field in the Tigers' early season games in the spring of '91. The film shows players making mental errors and playing without the enthusiasm that was standard on a "Tigers" squad.

But the team - and the town - pulled together. That spring they found themselves in a familiar position: Vying for a state championship.

Actors Boothe, Tom Arnold, Danielle Savre and Mike Cornelison were in Iowa Sunday talking in the movie, filmed in Norway, Cedar Rapids and Marshalltown. Coaches Van Scoyoc and Stock also attended the screening, along with Mike Boddicker, a Norway graduate and former major league pitcher who served as consultant for the film. He is also the cousin of Gary Boddicker.

"It's just a great portrayal of what small town life is like, and why things like baseball are so important to those communities," said Iowa native Arnold, who plays the father of one of the team's players. "I knew I had to be involved because it's such a good story."

Stock, now a principal at Oak Ridge School in the Linn-Mar school district in Marion, said "The Final Season" brought tears to his eyes the first time he saw it.

"It really brought me back, it was like reliving that whole '91 season over again," he said. "I think this will connect with people. It shows you can accomplish anything if you just keep trying and work hard."

{M3Rated:{M3 PG, for language, thematic elements and some teen smoking

From left, Tom Arnold, Danielle Savre and Powers Boothe posed for members of the Iowa media Sunday outside a screening of "The Final Season" at Galaxy Cine 16 in Cedar Rapids.
MARY STEGMEIR / COURIER STAFF WRITER

The Norway Tigers singing the National Anthem in "The Final Season."
© Copyright 2021 The Courier, 100 E. 4th St. Waterloo, IA | Terms of Use | Privacy Policy
Powered by BLOX Content Management System from TownNews.com.
You don't have any notifications.