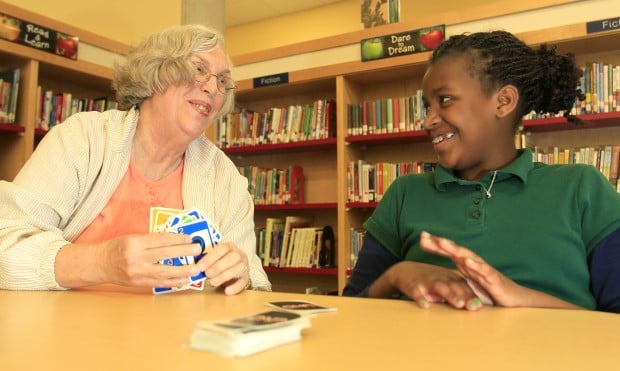 Lynn McDonald, left, a mentor with the Job Foundation and Dominiqua Watts, right, share a laugh as Watts wins another round of UNO during the first half of their visit at Cunningham Elementary in Waterloo, Iowa, Monday, May 7, 2012. (TIFFANY RUSHING / Courier Staff Photographer) 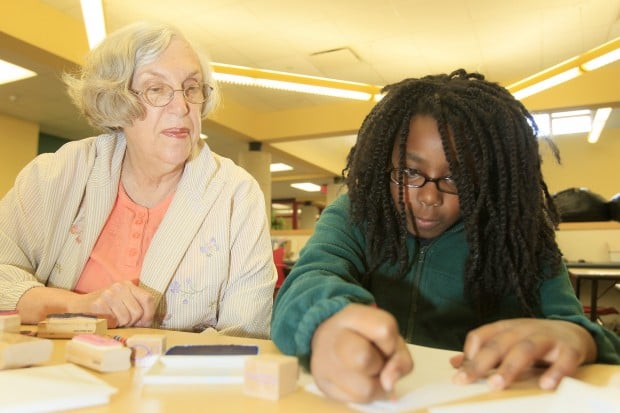 Lynn McDonald, left, a mentor with the Job Foundation looks on as Kaidajaha Greer, right, makes greeting cards during the second half of their visit at Cunningham Elementary in Waterloo, Iowa, Monday, May 7, 2012. (TIFFANY RUSHING / Courier Staff Photographer)

That is Jennifer Brost's conclusion six years after starting The Job Foundation, which pays participating Waterloo students based on their performance in academic classes. Currently, 25 elementary to high school students who qualify for free or reduced-price lunch are enrolled in the program.

"Our results have always yielded some increase in grades," said Brost, president and founder of the organization. "Attendance is probably the biggest improvement that we've seen."

Comparing the first and second semester of participation for students new to the program shows average improvements of 6.22 to 8.28 percent in grades, behavior and effort. Students also increased their school attendance by 26.3 percent after enrolling in the program.

Students can be paid up to $9 per grade (for a 4) at the elementary school level to as much as $30 per grade (for an A) at the high schools. The foundation serves children from qualifying families in the Dr. Walter Cunningham School for Excellence and Lincoln Elementary School attendance areas.

Brost has received grants from area financial institutions and foundations to fund the activities. "We have a lot of really good community support, and we're looking for more," she said. The organization also always needs volunteers.

Two Cunningham fifth-graders who participate in the program say the money is a good motivator, but they already had high grades. "I always try hard," said Yajaira Burt.

"It's just a kind of thing that can push me to do better," said Dominiqua Watts, noting that she wants to go to Duke University and become a lawyer. "My family kind of pushes me to be better."

Brost and her husband, Mike, were inspired to start the foundation after their son, Job, was stillborn in 1999. The death was related to a medical error that almost cost Jennifer her life, as well. Upon waking from a coma following the incident, Brost said she thought, "This is so bad, I need to do something good."

Brost, now a Grundy Center resident, remembered the run-down apartment building she lived in during college and how the children there seemed trapped in a cycle of poverty. She set her sights on helping Waterloo children in similar circumstances break out of poverty.

But The Job Foundation is about more than pay for performance. Students are required to save 60 percent of what they receive until age 18 in an account set up for them by the organization. "Our goal is that they'll graduate with $3,000 in savings," said Brost, noting it can be used for anything from college to daily living expenses after that.

The remaining money students earn is spent during planned, supervised shopping trips. The children create a list and comparison shop at several stores before making purchases. They are also encouraged to donate to charities.

"I get clothes and stuff for my room and my house," said Burt.

Participant Kaidajaha Greer, a Cunningham third-grader, added, "Last year, I got some food and some clothes and donated it."

Students are regularly mentored or tutored, receive money management training, and participate in group activities throughout the year. "I've looked forward to coming out of class and just playing games and having fun," said Watts, of the time with her mentor. She also enjoys the community activities done by the whole group, from boating during a nature event to a dinner and silent auction that benefits the foundation.

Delores Meeks, grandmother of another girl in the program, said both the mentoring relationship and the money management training have helped her granddaughter. "Understanding the value of money is probably the thing that benefited her the most," said Meeks.

During high school, participants are required to go through driver's education --- paid for with the savings, if necessary --- so they can get a license. Another $200 in savings goes toward setting up a secured credit card account when the students turn 18, allowing them to begin establishing credit.

Along with teaching the students to manage money, helping them establish a good credit score is central to the foundation's aims. Without that, people can't obtain a standard car loan. That typically forces them to purchase less reliable cars, often at a higher cost.

Having no car or an unreliable car may affect their ability to get and keep a job --- which is essential to escaping from poverty.

"We feel like for that cycle (of poverty), transportation is a huge part of it and it's easy to do something about it," said Brost.

Plant-based chIcken nuggets come to the US market

Plant-based chIcken nuggets come to the US market

Navy ship is treated to a light show from Mother Nature

Navy ship is treated to a light show from Mother Nature

The accused is a longtime pastor who started a counseling practice in 2004, covering marriage, anxiety, grief and depression.

The Iowa Board of Nursing has agreed to reinstate the license of a Waterloo nurse who has faced multiple allegations related to theft, drunken driving and endangering patients.

A Waterloo man has been sentenced to prison for beating a 72-year-old maintenance man to death with a child’s bicycle when he lost his temper in 2018.

Fire crews arrived on scene and found smoke coming from all four sides of the residence and a fully involved kitchen.

Lawsuit filed Thursday contends the use of force was excessive and that the case has been shrouded by secrecy.

At issue is the fact that patients who sue for malpractice have no way of knowing whether their doctor is the subject of an active investigation by the Iowa Board of Medicine.

Johnson took the stand, telling jurors Young-Mills and others were trying to get in her vehicle when she fired what was supposed to be a warning shot

Lynn McDonald, left, a mentor with the Job Foundation and Dominiqua Watts, right, share a laugh as Watts wins another round of UNO during the first half of their visit at Cunningham Elementary in Waterloo, Iowa, Monday, May 7, 2012. (TIFFANY RUSHING / Courier Staff Photographer)

Lynn McDonald, left, a mentor with the Job Foundation looks on as Kaidajaha Greer, right, makes greeting cards during the second half of their visit at Cunningham Elementary in Waterloo, Iowa, Monday, May 7, 2012. (TIFFANY RUSHING / Courier Staff Photographer)