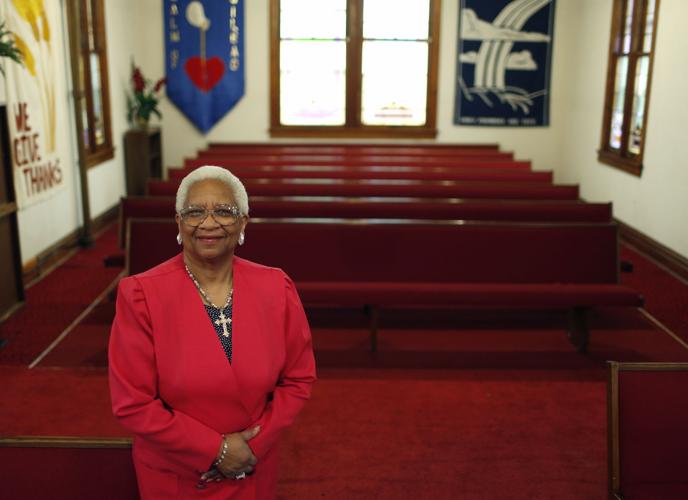 The Rev. Mary Robinson,  a groundbreaking local African-American minister, is shown in her church, All Nations Community Church, in Waterloo. 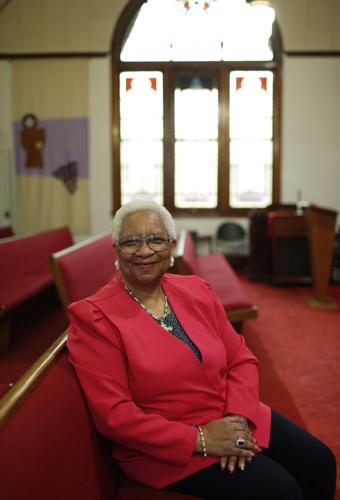 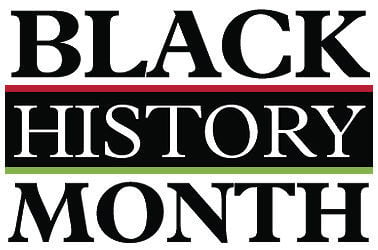 WATERLOO — For the Rev. Mary Robinson, faith is a coat of many colors.

She says she used to shake her fist at God. There was no way — no way — she was going to become a minister.

Some 25 years ago she stopped fighting. It may be the only time she did.

As a student, as a single mom, as a woman in a previously male-dominated profession and as an African-American, she’s never given up.

Her message is universal: While cultural differences exist, everyone has value, and everyone needs their culture acknowledged as they worship and in their lives.

The name of her church — All Nations Community Church, affiliated with the American Baptist Church — says it all. It is a congregation of many nationalities.

“Liberian, Congolese, we have a family from Honduras, African-Americans and Caucasian-Americans too,” she says. It’s not a mega-church by any stretch of the imagination.

It is a contrast to her prior congregation at Valley View Baptist in Cedar Falls. Twenty-four years ago this month, she made history when she was installed as pastor; she had been interim pastor since the preceding July. At that time, Valley View was the only white congregation of the 160 American Baptist churches in the Iowa-Minnesota region with a black female minister.

“I can’t say enough for this church for making this choice in this day,” one of Robinson’s mentors, the Rev. Eugene Williams, longtime leader of Waterloo’s Faith Temple Baptist Church, told members of the Valley View congregation.

The congregation was virtually all white except for Robinson’s daughter, a mixed-race family and an Iranian family. She helped prevent the Iranian family from being deported on an immigration issue.

She was invited to quarterly meetings and training sessions by the administrator of the U.S. Citizenship and Immigration Services district office in Kansas City, Mo.

“I think he got tired of me bugging him with all kinds of issues, so he started inviting me to meetings, and I got it firsthand,” she said.

Robinson has had a long personal journey. Born in Sallis, Miss., she moved to Waterloo at a young age when her father took a job at John Deere. But a big part of her upbringing included regular trips back to Mississippi. She has traced her family history back to 1824 and made a pilgrimage to Nigeria and Ghana to research family roots.

As a Waterloo East High sophomore, Robinson quit school, got married and had three daughters. She worked as a waitress and dishwasher.

She later earned a high-school equivalency diploma, then a social work degree from Wartburg College and a law degree from the University of Iowa.

She spent 18 years as a lawyer in Cedar Rapids prior to being called to the ministry, attending seminary at the University of Dubuque Theological Seminary. She served 12 years on the State Board of Education and is in the middle of her second stint on the Black Hawk County Board of Health, currently serving as board vice chair.

She served as state president of the National Association for the Advancement of Colored People, acting director of Waterloo’s Martin Luther King Jr. Center and has a long list of community service awards. She’s also a part-time chaplain at the Tyson Fresh Meats plant in Waterloo.

She recalls, sometimes with tears, the scars from her struggles. The day she was told she was only capable of “menial” labor after completing a survey at the Waterloo unemployment office in 1964. Encountering a Cedar Rapids pastor who would not accept women in ministry. Fighting for black central committee members of the Iowa Democratic Party to be able to vote at the state convention.

But she also carries the memories of those who helped her — like Dorothy Kyle, her boss at Waterloo’s Midtown Neighborhood Center, a former Operation Threshhold social service center on Walnut Street, and her husband, Walter. They recognized her potential and helped her through Wartburg. And a pastor at the all-white First Baptist Church of the Brethren in Cedar Rapids, who assured her, during a moment of frustration, “This isn’t a black church. And it isn’t a white church. This is God’s church.”

That experience prepared her for her ministry at Valley View in Cedar Falls, and her current ministry has given her additional perspective.

“You learn that people are the same. But seriously, there are so many cultural differences. In America, and here in Waterloo, we have a dominant culture. But then within the dominant culture are cultural groups still living out their lives in ways they are accustomed to back home.

“And that’s not unique,” Robinson said. “We did that — blacks — when we moved up from Mississippi or the South. You had the dominant culture, but then you knew there was the, quote-unquote, “black” way, whatever that is. Just like there’s a Liberian way, there’s a Congolese way, there’s a Bosnian way. There are cultures within a culture. That has not changed. That was eye-opening for me.”

It’s like older white Iowa families holding on to their German culture. “I applaud that,” she said.

She’ll include culture in her services — like taking note of Liberian independence day, or having Scripture read in French for Congolese members.

“I just know when we get to heaven it’s not all going to be one race, one country. I believe there will be someone from every nation on earth. I do believe that,” she said. “And so, why is it when someone comes to a church, or attends a church or joins a church, why can’t they have something that makes them feel like it’s home? Whether it’s a song, or sermon illustrations?

“It’s the same with gender,” she said, recalling negative images of women in church when she was young. “Even with that, we need to make sure people feel included. There are so many positive examples in the Bible of women. There are so many positive examples of people who are from different races in the Bible,” which she researched in seminary. “I believe the Bible can be inclusive,” with a central message for everyone.

“We all want to resonate with who we are,” Robinson said. “It doesn’t take away from the fact that we’re Americans, that we’re proud of this country, that we’re happy to be here.”

While she hasn’t been afraid to shake things up during her life, she quips she is no longer shaking her fist at God. Her hands are only raised in praise.

The city of Waterloo has signed a "sister city" agreement with Unification City in the Republic of Liberia, a country in Western Africa with a growing local immigrant population.

State Department says don't use Uber in areas around Cancun

State Department says don't use Uber in areas around Cancun

The Rev. Mary Robinson,  a groundbreaking local African-American minister, is shown in her church, All Nations Community Church, in Waterloo.