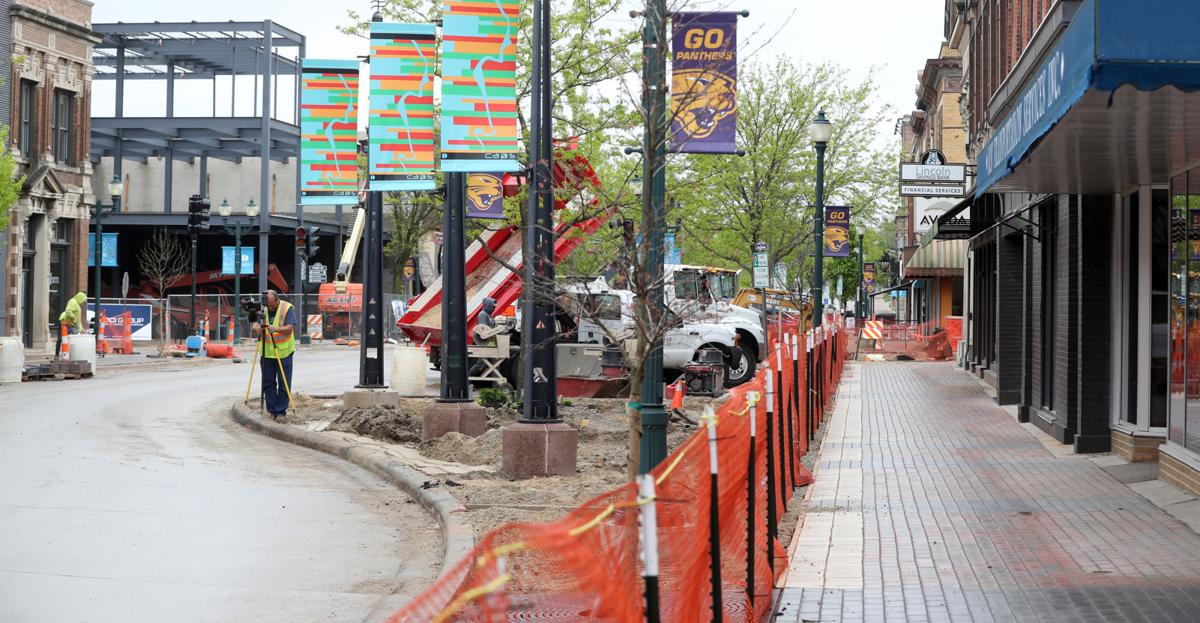 Work continues on the Cedar Falls streetscape project on Monday. 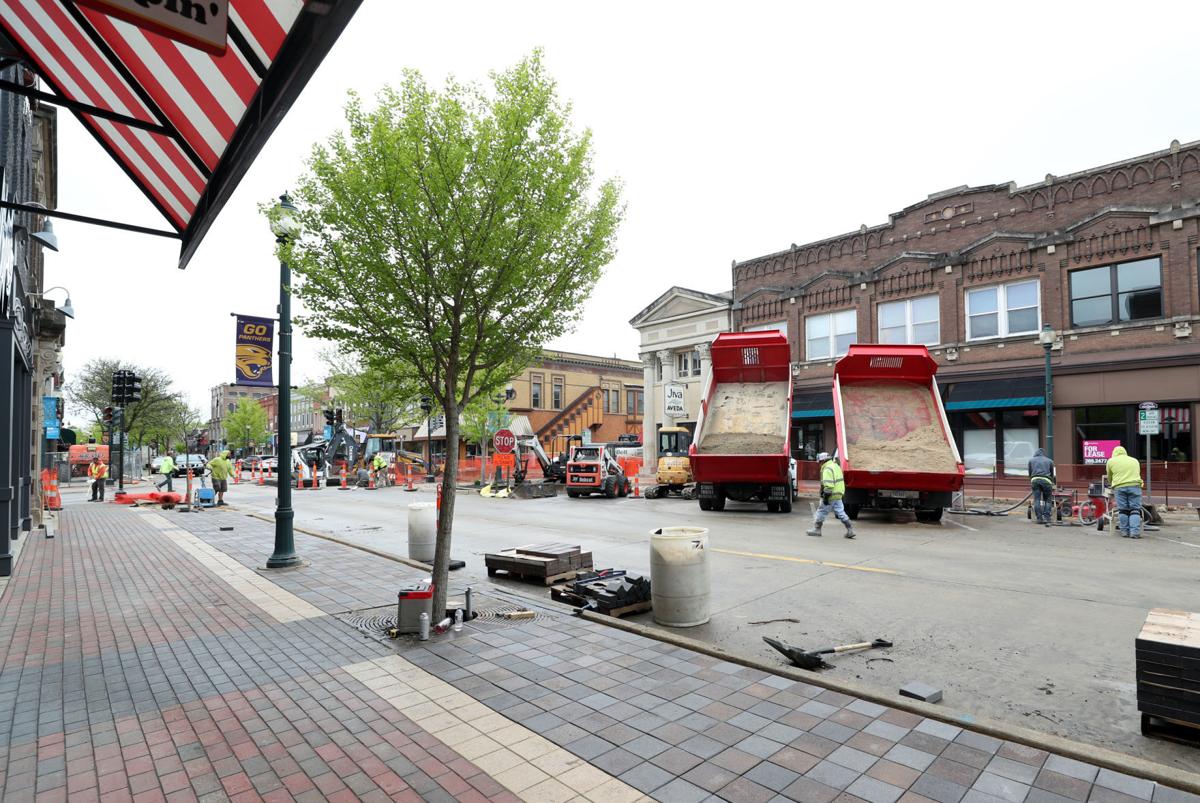 CEDAR FALLS — Construction is in full swing on the downtown streetscape project, but businesses remain accessible to foot traffic.

Work on the sidewalks along the first two blocks of Main Street started with installation of new clay brick pavers in an eight-foot width adjacent to the storefronts.

As a result, “pedestrian access to the buildings remains,” said Amanda Huisman, communications specialist with the city of Cedar Falls, noting construction work does not affect business hours. Limitations related to the COVID-19 pandemic may have an impact on hours and whether some businesses are open, though.

The $2.22 million project encompasses sidewalks along Main Street from First Street to just south of Third Street as well as the block of Second and Third streets between Main and Washington streets. Along with the brick pavers, there will be new concrete benches and some trees will be replaced. Electrical work is being updated and some light poles relocated.

On the side streets, the roads are also being reconstructed as sanitary sewer, storm sewer and water main work is done to improve the area’s infrastructure. Work is underway now on Third Street. Second Street reconstruction is expected to begin around the end of July once Third is complete.

Currently, there are sidewalk closures on the south side of Third Street and in front of 302 Main St. The Third Street sidewalk will be closed for six to eight weeks as reconstruction work begins. At 302 Main, a building is being constructed that requires the closure for three weeks.

After the streetscape work was approved by the Cedar Falls City Council in early February, the project got a two-week early start March 31 at the height of pandemic-related shutdowns.

“Basically, the original plan before COVID was do a half block at a time,” said Husiman. Instead, the city worked with contractor K. Cunningham Construction to do the eight-foot width of brick pavers throughout the project area before moving onto other components to ensure access to businesses during the rest of the construction.

That was done at the start of this week with the exception of work still to be completed on the intersections, crosswalks and curb cut ramps.

Ben Claypool, a city civil engineer, said with installation of fiber optic lines and electric circuits, “there’s pretty involved underground work” to be done in those areas. He noted that the eight-foot width of the walkway closest to the buildings was the simplest section to complete.

The areas nearer to the street include additional items under the pavers like new electrical conduit that will bring connections to each tree for easier lighting. Subdrains are also being installed under the pavers for water infiltration as well as concrete pads where benches, trash cans and bike racks will be located.

In a parallel project, “the work over across First Street at Peter Melendy Park is definitely starting to wrap up,” said Claypool. That involves the same brick pavers along with new landscaping components around the sculpture and trail.

As far as the Main Street work, “the goal for the entire project is to have it wrapped up before Thanksgiving,” noted Claypool.

He said the new brick pavers, with an 80-year lifespan, will last longer than the surface they are replacing. The existing concrete-based pavers were installed in 2005. Those are “worse for the wear than expected,” said Claypool.

The new surface will also comply with changes in federal Americans with Disabilities Act requirements.

“The updated design will be catching up to the updated requirements,” he explained. “They continue to get more strict.”

Videos of local fire departments in action at business fires.

Firefighters responded to a fire Monday night, Dec. 1, 2014, at Tri-City Clothing at 713 Logan Ave. in Waterloo.

Fire broke out in a Cedar Falls, Iowa, salvage yard at 1524 Independence St. on Monday, April 10, 2017, engulfing vehicles and tires.

Luigi's Restaurant and Lounge in Oelwein, Iowa, was destroyed by fire on Saturday, Nov. 12, 2016.

Fire broke out in a kitchen appliance at Great Wall Chinese Restaurant in Cedar Falls, Iowa, on Friday, April 29, 2016. The flames spread thro…

Firefighters battled a blaze that broke out near a shredder at Alter Metal Recycling, 1500 W. Airline Highway, Waterloo, Iowa, on Wednesday, J…

A fire destroyed a former railway building that was being used as a warehouse off of 4th St. SW, Oelwein, Iowa, in the early morning hours of …

Downtown Cedar Falls Main Street sidewalks are getting new brick pavers as part of a $2.48 million project that will also include a number of infrastructure improvements.

A maximum property tax levy resolution to be considered Monday by the Cedar Falls City Council for fiscal year 2021 requires a super majority voting in favor for passage.

Several infrastructure projects are being moved back by the city of Cedar Falls as it grapples with potential revenue losses due to pandemic-related shutdowns.

Within an hour of Gov. Kim Reynold announcing Wednesday that more facilities will open at state parks in time for the long Memorial Day weekend, all 12 cabins available for rent at Iowa’s first state park were spoken for.

Work continues on the Cedar Falls streetscape project on Monday.