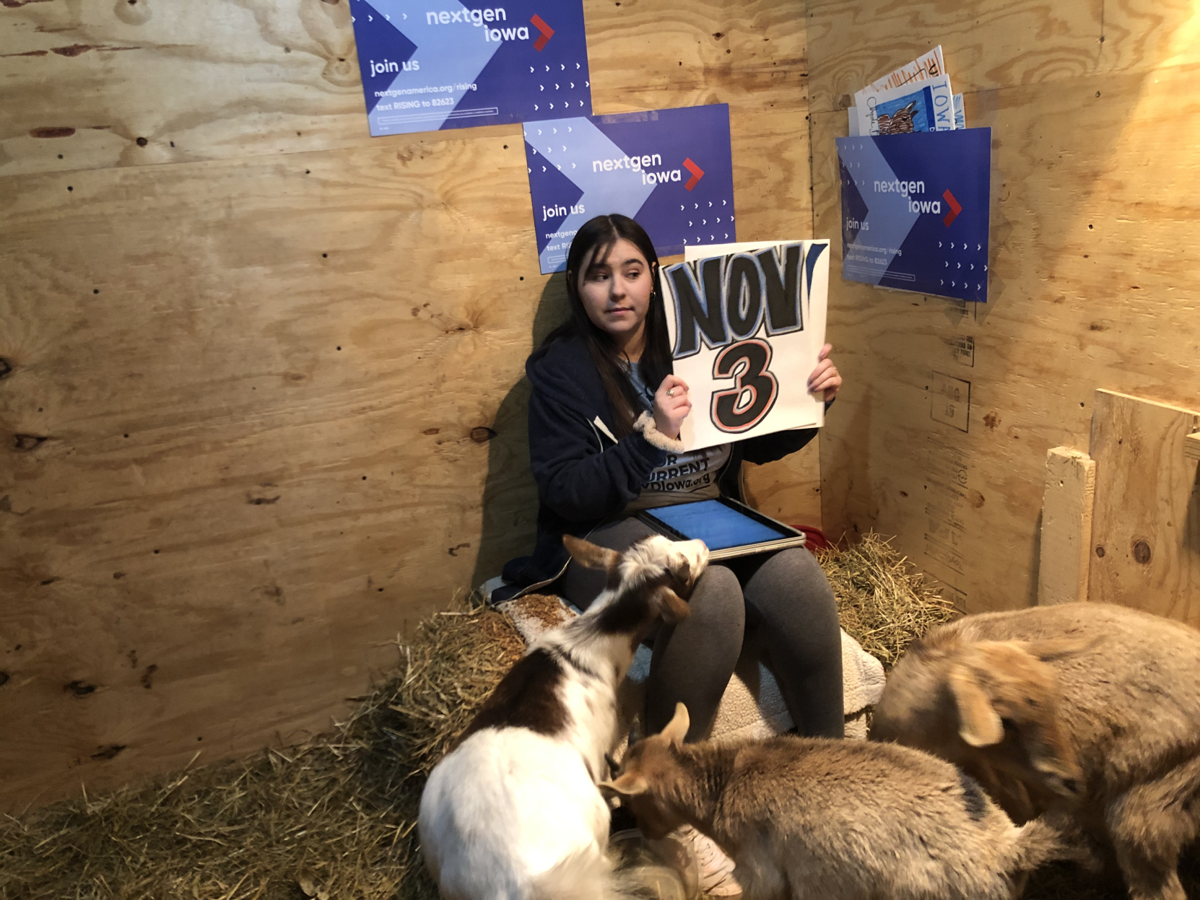 Micah McCutchan, a field organizer for NextGen Iowa, holds up a sign noting the date of Election Day, Nov. 3, 2020, as a goat attempts to chew on her tablet during a Goat Out the Vote event at a Waterloo goat farm on Oct. 22. 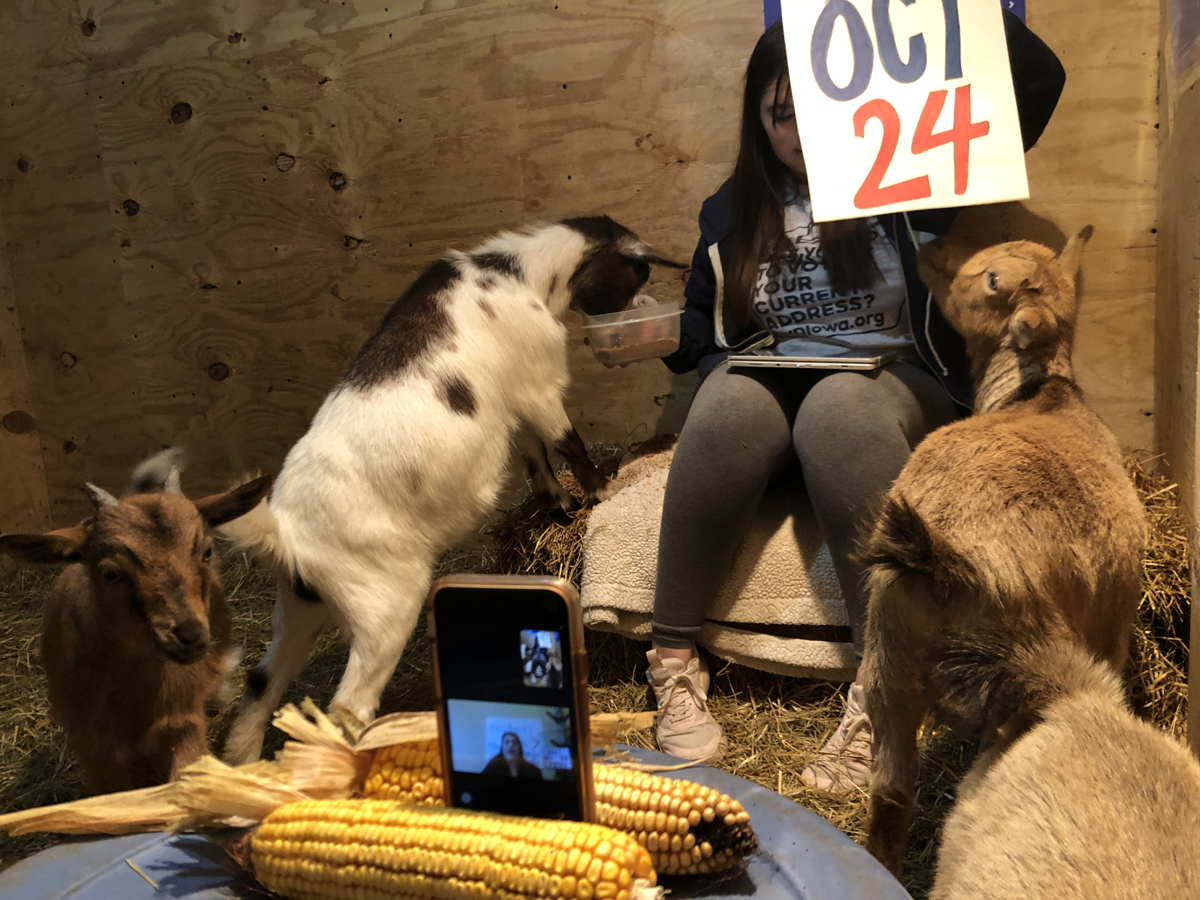 Micah McCutchan, a field organizer for NextGen Iowa, holds up a sign noting the last day to request an absentee ballot or register to vote in Iowa, Oct. 24, 2020, as she is surrounded by goats in a barn during a Goat Out the Vote event at a Waterloo goat farm on Oct. 22, 2020.

WATERLOO — For Micah McCutchan, it was “pretty obvious” why she decided to host her latest get-out-the-vote livestream from a Waterloo goat farm.

“Goats are freaking adorable — everyone loves goats,” she said.

Never mind that, as the NextGen Iowa field organizer was starting the “Goat Out the Vote” livestream, one of the goats mistook McCutchan’s finger for food and bit down.

How do I vote in Black Hawk and Bremer counties?

If it convinced a few young people to watch — and learn more about how to vote in the process — it was all worth it.

“Voting seems really complicated this year, but it’s not, in reality,” McCutchan said. “And if you think voting is too complicated and you’re stressed out about it, don’t worry — we’re here to help, and your vote matters.”

As the 2020 presidential election finally winds its way down to Election Day, groups like the progressive NextGen Iowa are using events like Goat Out the Vote, as well as rides to the polls in places like Cedar Falls, to turn out an historically underrepresented voting bloc: Young people between the ages of 18 and 35.

It’s not that younger voters don’t care about who’s representing them, said McCutchan. It’s the other way around.

“Most people want to see change — they have priorities they want to see reflected in government — but people feel government doesn’t care about them,” she said.

The coronavirus pandemic has made NextGen’s job, which used to involve a lot of door-knocking, a bit more difficult. But organizers like McCutchan are working the phones and running voter how-to livestreams, as well as reaching people on social media.

And their efforts, along with other youth voter turnout efforts, have been working.

“All of the requests are evidence that a lot of people want to vote in this election; they want to express that they’re unhappy,” Burke said. “It shows that people are taking it seriously.”

For those that aren’t sure about the candidates on offer, McCutchan instead asks about the issues that are important to them, and points out which candidates align with those issues.

“If voting doesn’t matter, they wouldn’t make it difficult to vote,” she said. “Your vote is personal. It’s about you standing up for what you care about, and showing that you care enough to act.”

“That’s the first time in my eight years that I’ve ever heard that we were low on body bags,” a UIHC nurse said.

Another arrest made in August Waterloo shootout

Another person has been arrested in an August gunfight that sent two people to the hospital.

A Cedar Falls bar has settled with state regulators over alleged violations of coronavirus precautions.

Police have released the identity of a Metropolitan Transit Authority bus driver who was severely injured in a crash with a straight truck on Monday.

CEDAR FALLS – A Waterloo man has been arrested for allegedly stealing a TV from a woman’s basement while she was home.

Red Fox Inn in Waverly officially sold to developer for $1

The crumbling former Red Fox Inn will get a chance at a new life as a hotel, convention center and rental apartments.

A 27-year-old Waterloo woman was identified as the person killed in a weekend homicide as condolences poured in on social media.

Micah McCutchan, a field organizer for NextGen Iowa, holds up a sign noting the date of Election Day, Nov. 3, 2020, as a goat attempts to chew on her tablet during a Goat Out the Vote event at a Waterloo goat farm on Oct. 22.

Micah McCutchan, a field organizer for NextGen Iowa, holds up a sign noting the last day to request an absentee ballot or register to vote in Iowa, Oct. 24, 2020, as she is surrounded by goats in a barn during a Goat Out the Vote event at a Waterloo goat farm on Oct. 22, 2020.