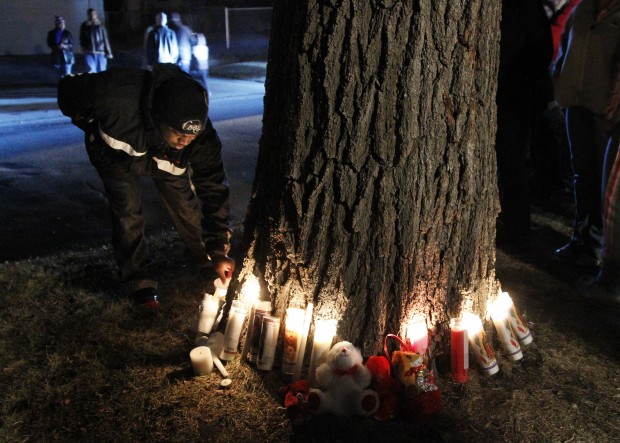 Davaris Morehead lays a candle near a tree for longtime friend of Martavious Johnson who was shot and killed following a brief argument the night before as many gather for a vigil outside his home Friday, Jan. 6, 2012, in Waterloo, Iowa. (MATTHEW PUTNEY / Courier Photo Editor) 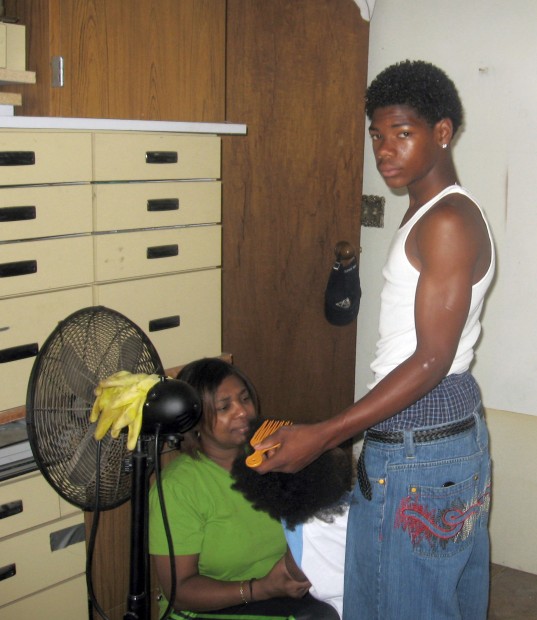 Police said the autopsy confirmed that Johnson died from a single gunshot wound.

WATERLOO, Iowa --- The family of a Waterloo teen continues to grieve after he was shot and killed following a brief argument Thursday night.

At his Waterloo home, mother Tanya Johnson handled football and basketball plaques from her son's days on the Logan Middle School teams. She placed them next to portrait shots showing how he grew over the years.

An aunt, Steppie Perry, added a three-on-three basketball trophy to the collection on the dining room table.

"He was more of a sports person. Everything. Basketball. Football," Tanya Johnson said.

"I never got a chance to see him play football, but he was fast. When he ran, you couldn't catch him," Perry added.

His mother said he talked about opening a barbershop - a candid snapshot shows him cutting his 4-year-old nephew's hair - or landing a job at John Deere, but he wasn't interested in his class work.

"He was more like a class clown," Tanya Johnson said. She said he could bring a smile to anyone.

Martavious Johnson and his sister went to the 500 block of Sumner Street at about 8 p.m. to drop off the sister's boyfriend, the mother said.

According to the account she was given, a group walking down the street began shouting. Martavious Johnson asked the what gang they were with. When they told him, he laughed and cracked a joke and turned to get back into the vehicle, Tanya Johnson said.

"He turned his back, and one of the dudes shot him in the back," she said.

Police said only one shot was fired.

He was driven to Allen Hospital where he later died.

No arrests have been made in the case.

Thursday's death was the second fatal shooting in as many months.

On Dec. 14, police found the body of 34-year-old Robert Joseph Shannon of Parkersburg in a parked car with a gunshot wound to the head. Montez Tyrone Caples, 21, of Waterloo, was arrested for murder in the case.

WATERLOO, Iowa --- A father whose son was shot and killed Thursday called on fellow parents to learn from the tragedy.

Davaris Morehead lays a candle near a tree for longtime friend of Martavious Johnson who was shot and killed following a brief argument the night before as many gather for a vigil outside his home Friday, Jan. 6, 2012, in Waterloo, Iowa. (MATTHEW PUTNEY / Courier Photo Editor)