Virus update: Europe locking down as US passes 99,000 cases a day 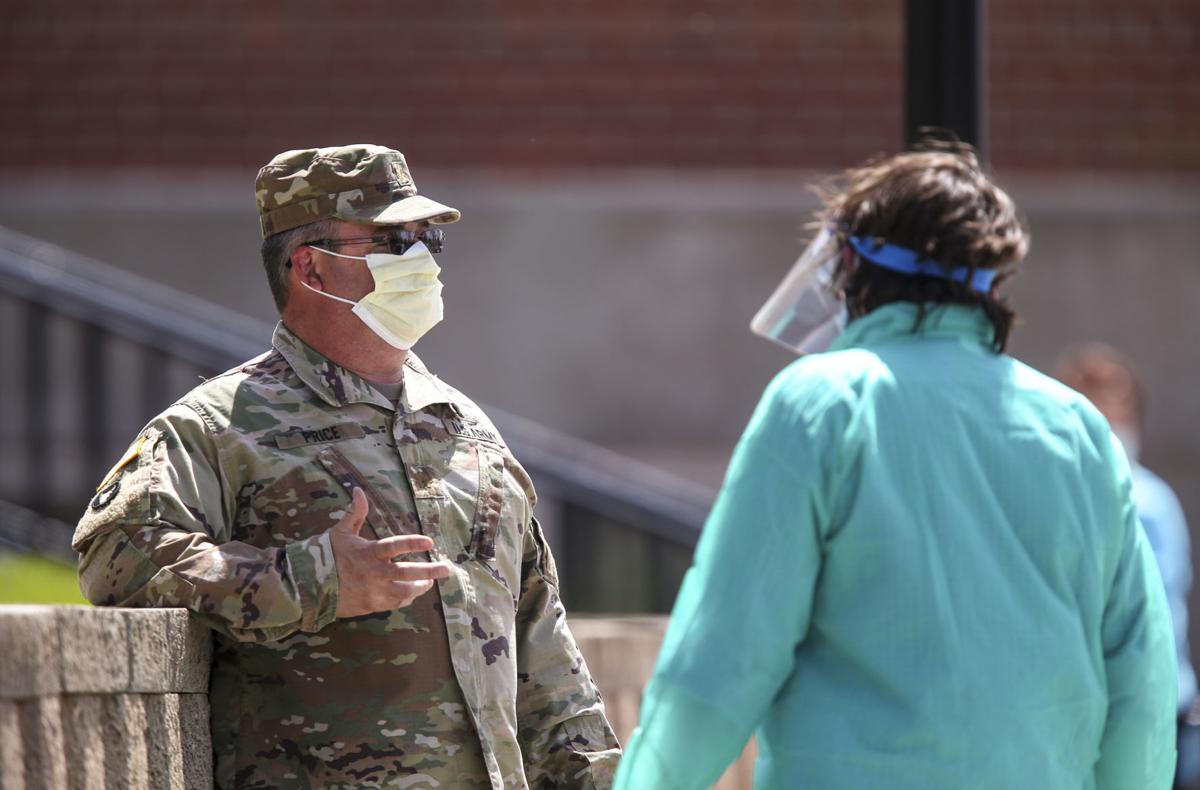 Maj. Richard Price of the Iowa Army National Guard talks with public information officer Matt Highland of Iowa Public Health as testing for coronavirus is underway at the Toledo Juvenile Home in Toledo on Wednesday. 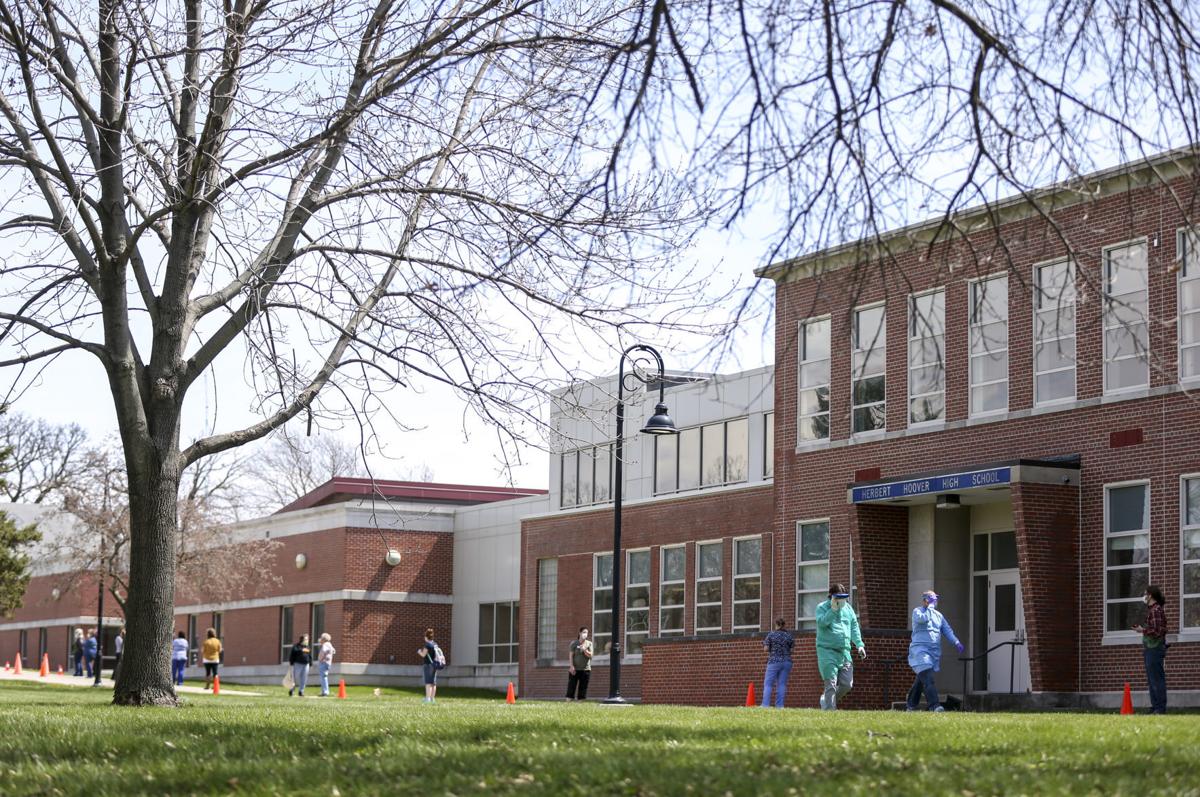 Iowa Public Health public information officer Matt Highland (in green) walks with another public health worker past a line of individuals waiting to be tested for coronavirus at the Toledo Juvenile Home in Toledo on Wednesday. The Iowa Department of Public Health, the Iowa Department of Human Services and the Iowa National Guard opened a temporary testing site to test long-term care facility staff in Tama County. 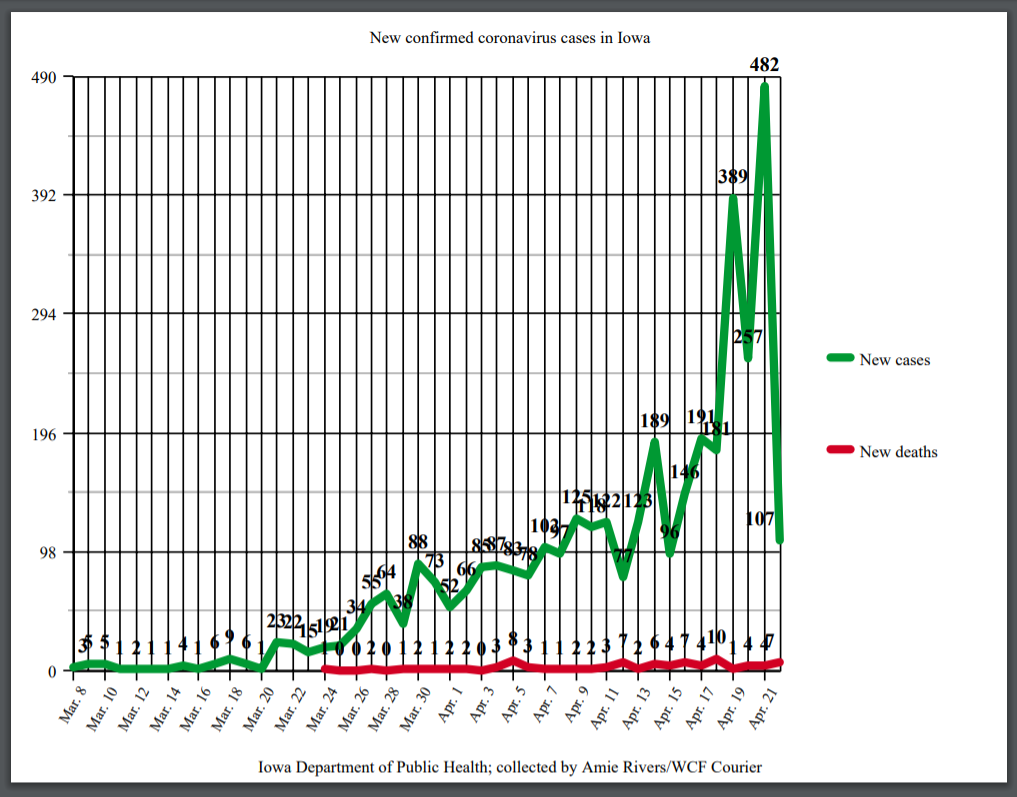 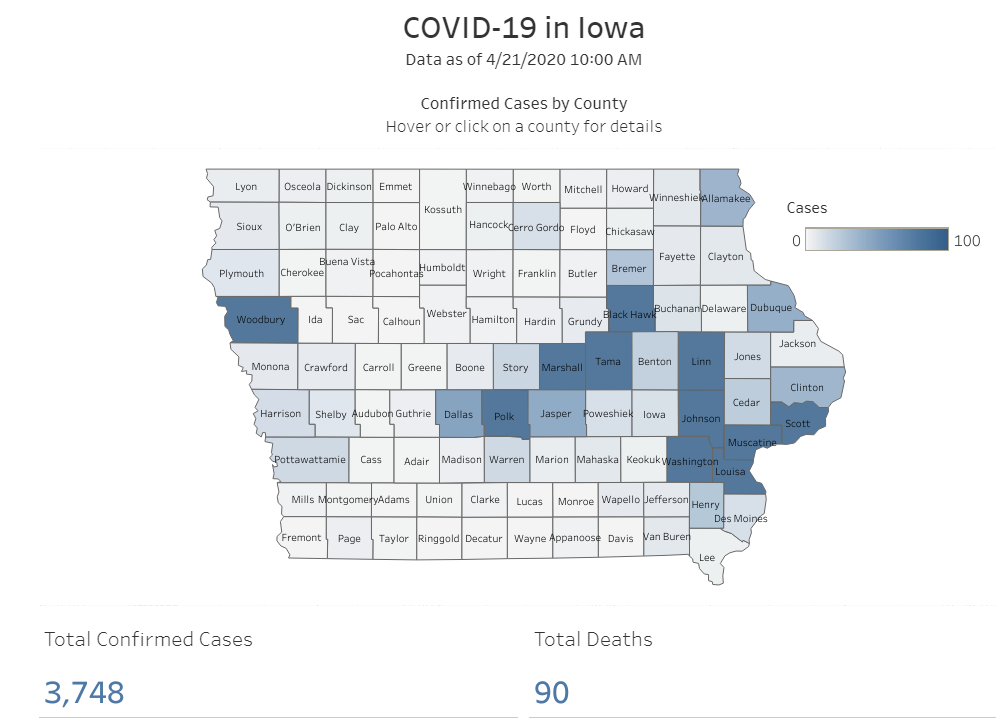 Total coronavirus cases in Iowa as of April 22, 2020, per Iowa Department of Public Health.

Coronavirus cases by race/ethnicity as of April 22, 2020.

DES MOINES — Forty-five of Iowa’s 90 deaths from coronavirus have been residents of long-term care facilities, the governor said Wednesday, as another outbreak in a Poweshiek County nursing home brings the number of outbreaks at those facilities to 11.

Black Hawk County’s deaths haven’t included anyone older than 81, according to state health officials, and county officials have pointed to Tyson Fresh Meats as the only outbreak in the county, responsible for at least 40% of the county’s total caseload and at least one death. Sheriff Tony Thompson wouldn’t confirm Wednesday if any of the deaths were Tyson employees.

The state said 1,428 of those people have recovered, for a recovery rate of 38%. But 92 Iowans were currently in intensive care units and 57 of those were on ventilators statewide.

Tama County is in the midst of two outbreaks — one at Premiere Estates of Toledo, a long-term care facility, and one at Iowa Premium, a National Beef meatpacking plant that remained closed as of Wednesday. Of the deaths, five have been elderly adults over the age of 81, and two have been middle-aged adults between 41 and 60.

The testing site opened Wednesday at the Toledo Juvenile Home, 701 S. Church St., and will also be open Thursday, but is for long-term care employees only, health officials said. It is not a TestIowa drive-thru site, though the state plans to also open one of those in Tama County soon.

“We anticipate testing more than 200 staff,” in Tama County, said Iowa Department of Public Health deputy director Sarah Reisetter. She added the testing will include both diagnostic as well as serology testing, which can test if someone has previously had the virus.

“We think the virus has been spreading in our communities now for a couple of months,” said Reisetter.

Although she did not establish a timeline, Gov. Kim Reynolds said Wednesday her administration is crunching the numbers on the new coronavirus’ impact in Iowa to determine when temporarily closed businesses could be re-opened in portions of the state.

One day after she announced a project to exponentially expand testing statewide, Reynolds said some areas of the state have had fewer confirmed cases of the virus and indicated her orders requiring mitigation efforts like temporarily closed businesses could be relaxed in those areas.

“We’re in a pretty good place throughout this state to have the conversation about how we in a responsible and safe manner start to open up the state. So we’re focused on that, and I’m hoping this week or by the very first of next week that we’ll have some announcements to make on what that looks like,” Reynolds said during an interview on WHO-AM radio in Des Moines.

Reynolds on Tuesday announced a newly expanded testing program that will enable the state to conduct roughly 540,000 tests over the coming months. On Wednesday she said that expanded testing ability, along with other public health data her administration has been tracking, will help inform when and where she will relax the mitigation efforts that have been in place since mid- to late March.

As of Wednesday, 75% of coronavirus cases in Iowa have been confirmed in just 10 counties, all of them in central or eastern Iowa, according to state public health data. Woodbury is the only county in the western half of the state with at least 100 confirmed cases.

On the map that the state public health department uses to rank the severity of the virus’ prevalence, on which the state is divided into six regions that are ranked on a 1-to-12 scale with 12 being the most severe, the northeast, southeast and south central regions all are rated 9 or 10, while the northwest, southwest and north central regions are rated no higher than a 6.

In 15 counties there have been no confirmed cases of the virus.

“We’re testing so we understand what the scope is and areas where those (cases) are located. But there are a whole lot of other areas of the state that are doing really, really well,” Reynolds said.

"Tyson’s closing their plant will prove to be a positive step forward in preparing our community for the flattening the curve," said Waterloo Mayor Quentin Hart.

At least 42% of all positive cases of coronavirus in Black Hawk County are from Tyson Fresh Meats, local health officials said Monday.

The closure of Tyson in Waterloo -- a large pork processing plant in the No. 1 hog producing state in the nation -- has huge ramifications for Iowa's multi-billion dollar pork industry.

Meals through Northeast Iowa Area Agency on Aging are offered on a contribution basis for people over 60 years of age.

Leadership Iowa nominations due May 1

The deadline is approaching quickly to nominate for Leadership Iowa, Iowa’s premier statewide issues awareness program hosted by the Iowa Association of Business and Industry Foundation.

Reynolds wants to start reopening Iowa ‘sooner rather than later’

Bremer County has recorded 67 coronavirus cases, an infection rate of just 0.2%, lower than the state's 0.5% rate. But the county has also recorded six deaths from COVID-19, a fatality rate of nearly 9%.

Maj. Richard Price of the Iowa Army National Guard talks with public information officer Matt Highland of Iowa Public Health as testing for coronavirus is underway at the Toledo Juvenile Home in Toledo on Wednesday.

Iowa Public Health public information officer Matt Highland (in green) walks with another public health worker past a line of individuals waiting to be tested for coronavirus at the Toledo Juvenile Home in Toledo on Wednesday. The Iowa Department of Public Health, the Iowa Department of Human Services and the Iowa National Guard opened a temporary testing site to test long-term care facility staff in Tama County.

Total coronavirus cases in Iowa as of April 22, 2020, per Iowa Department of Public Health.

Coronavirus cases by race/ethnicity as of April 22, 2020.