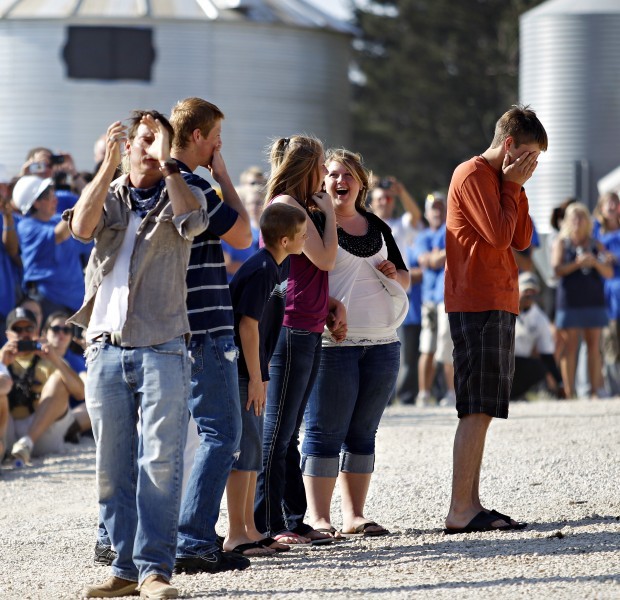 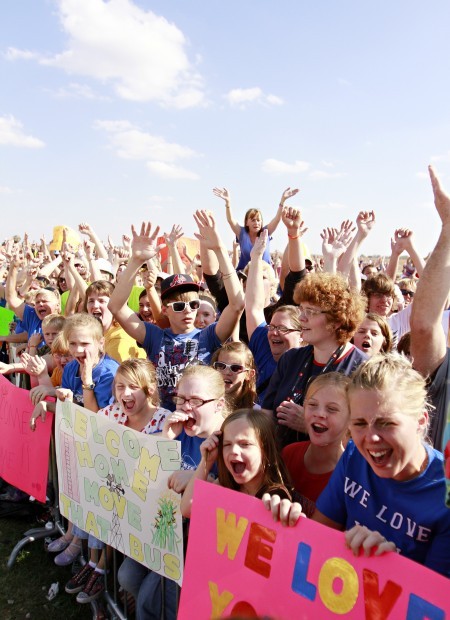 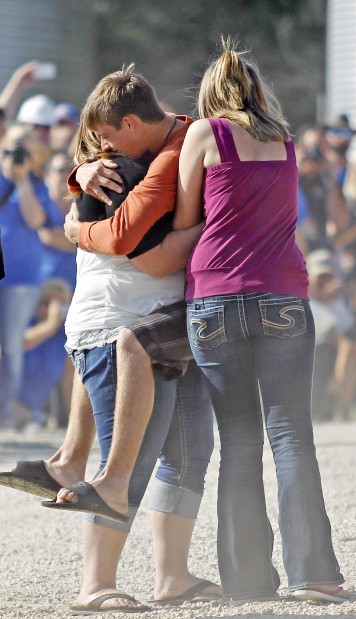 To view our coverage of the 'Extreme' build, click here.

WEST UNION, Iowa --- Determining who was more excited --- thousands of spectators or family members seeing their new house --- was difficult during the reveal Sunday for "Extreme Makeover: Home Edition."

But everyone enthusiastically chanted "Move that bus" as Audrey Gibbs and her six children got out of the limousine that chauffeured them to the property north of West Union.

The family seemed in a bit of shock, and fans cheered as the show's bus drove off.

"When I saw them come in today, it was probably one of the most exciting times of my life," said Carol Cameron of Calmar. "I am so happy for this deserving family."

Cameron knows the Gibbs family well and was one of the people instrumental in luring host Ty Pennington and designers Paul DiMeo, Tracy Hutson, Sabrina Soto and Jeff Dye to Northeast Iowa.

Pennington joined the family Sunday as they entered the house for the first time. The five-bedroom house includes a portion resembling a silo and a two-car garage that looks like a barn. Details of the inside will not be revealed until after the show airs on ABC.

"It's a beautiful home done really, really well with some professional designers. It's very, very nice. They will be very happy. All of us will," said Ed Larson of Larson Construction in Independence.

Larson and his wife, Janet, and their family were chosen as builders for the project.

Gibbs lost her husband to cancer in August 2000 and seven months later developed a brain aneurism. She is legally blind.

Her medical condition meant the loss of her career as a cosmetologist, and her home was deteriorating. There were no working toilets, and a ceiling was collapsing.

"They've always had a home. They just had a very sad house as far as the structure. It got to the point where it was not fixable," Cameron said.

"Audrey tried everything she could to take out a loan to possibly fix up the barn and make that into their house," she added.

Cameron, a fan of "Extreme Makeover," works for Northeast Iowa Community College. She met the family while working in the Office of Disabilities when Gibbs was a student there.

After watching the show one evening, Cameron decided to nominate Gibbs. She filled out the paperwork, wrote a letter with multiple signatures from the community and assisted in a necessary video and pictures.

Eight months ago, producers contacted Cameron and the process began.

"We went as a group and we submitted Audrey Gibbs, showing ‘Extreme Home Makeover' that we are a team here, and that this community was going to come together," Cameron said. "And that we were going to go ahead and build a house if they would give us that opportunity."

Gibbs graduated with cosmetology and massage therapy degrees from NICC before starting her own business, Therapeutic Massage by Audrey in Calmar.

"So we want to make sure that we extend the same educational opportunity to her children," said Liang Chee Wee, president of NICC. "We realized education is the most lasting thing we can do for the family."

"What'll be really neat about this is they can go to NICC for the first two years and then transfer to Upper Iowa for the second two years, and they've got the four-year degree program covered," Walker said.

Zion Lutheran Church, the family's congregation in West Union, assisted the family before the show. Members bring food to the house every Wednesday because of Gibbs' late work schedule. Church members also help Gibbs with transportation to and from her business.

This week, volunteers worked around-the-clock to construct the home in a week. Among the crowd were Haley Hunter of Waterloo, Sandy Hamann of Grundy Center and Mary McClaren of Evansdale. They volunteered from 2 to 8 a.m. Sunday and then waited seven hours to welcome the family home.

"I think the adrenaline kept us going, but we're tired now," Hamann said.

The three described the home as "very homey, down-to-earth and very modern."

Numerous businesses around the state offered manpower, materials and financing.

"Just look at the number of people out here. We do care about our neighbors. And I think that's the important message. Everybody wins today," Wee said.

WEST UNION, Iowa --- Thousands of people flocked to the home of Audrey Gibbs on the set of "Extreme Makeover: Home Edition" Sunday for the big reveal when the family was brought back to see its new home.

Spectators patiently waited hours for Gibbs and her six kids to arrive on their farm in West Union as their new home was revealed to them. They had spent the week in Boca Raton, Fla., while hundreds of volunteers worked night and day to build them a new home.

The family was brought to the home in a limo and then one large bus was moved for the family to see the home. A huge cheer arose from the crowd.

The show's host Ty Pennington and designers Paul DiMeo, Tracy Hutson, Sabrina Soto and Jeff Dye joined the family as they entered their living quarters for the first time. The five bedroom farm-style house is complete with an addition resembling a silo and a barn housing a two-car garage.

The press was kept back from hearing a close-up reaction of the family, which was filmed for the TV show. The show producers also would not reveal many of the details of the inside the home.

"It was rewarding. The outpouring of the entire community and Northeast Iowa was overwhelming," said Ed Larson of Larson Construction Co. in Independence.

Larson and his wife, Janet, were chosen as the builders.

"It's a beautiful home done really, really well with some professional designers. It's very, very nice. They will be very happy, all of us will," he said.

Gibbs lost her husband to cancer in August 2000 and seven months later developed a brain aneurism and was left legally blind.

Her medical condition meant the loss of her career as a cosmetologist, and their home was showing drastic signs of deterioration. There was no working toilet, and a ceiling was collapsing.

Presidents of Northeast Iowa Community College and Upper Iowa University were in attendance to present scholarships for five of the Gibbs children.

No date for the show's airing has been set.

The family is having a press conference Monday to talk about the new home.

Select the right and left arrows to shuffle through entries on the timeline:

Producers with 'Extreme Makeover: Home Edition' first announced they had selected a Northeast Iowa family for the show on Sept. 13. After unve…