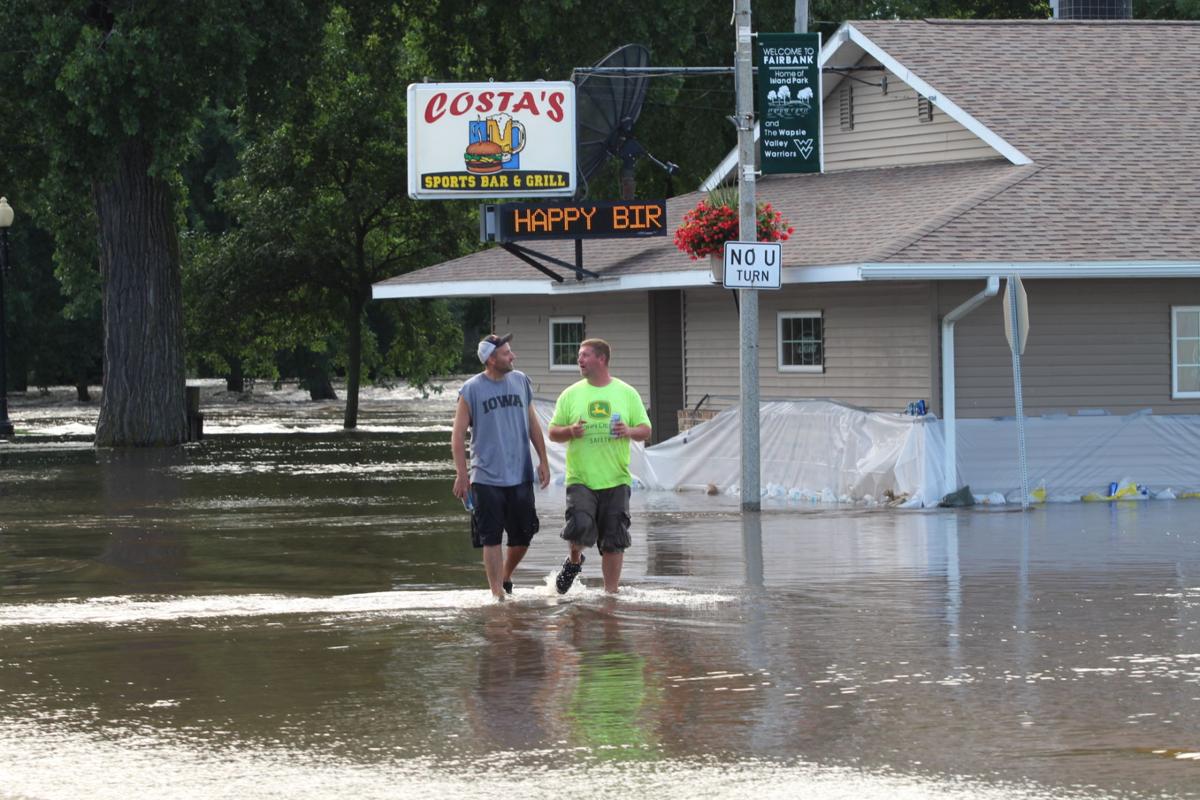 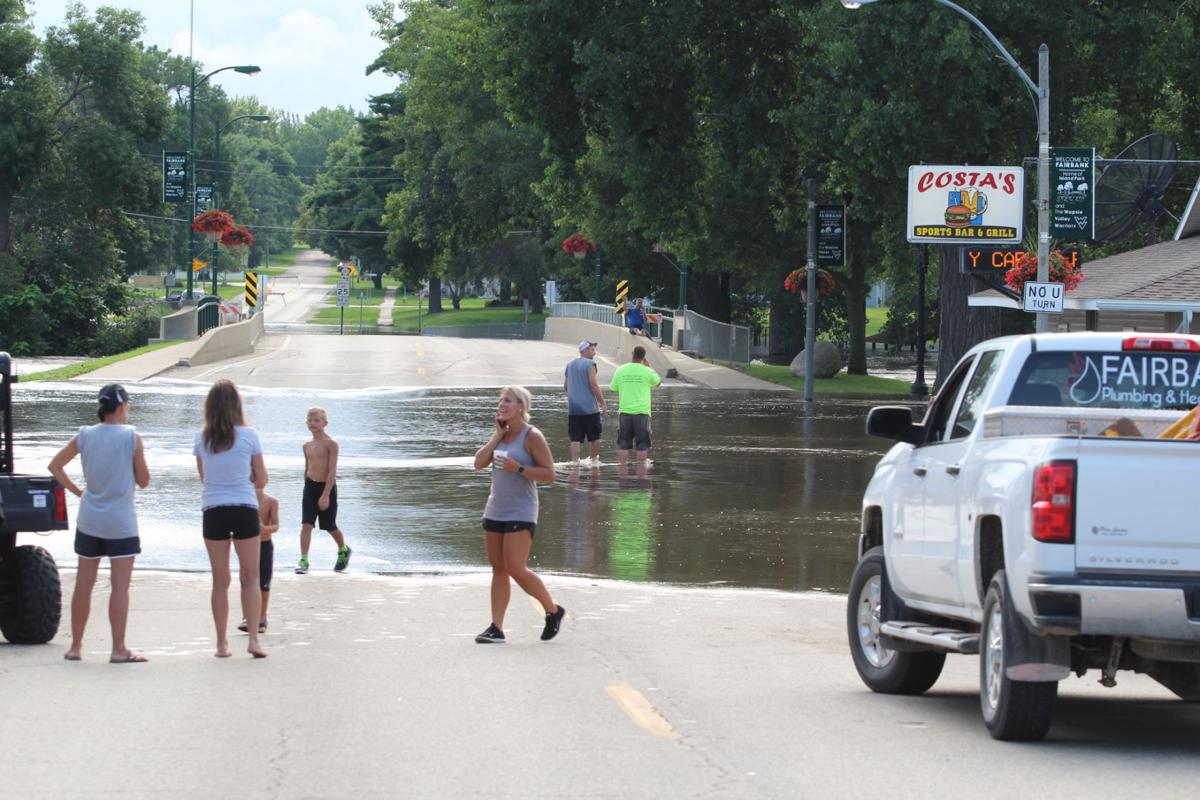 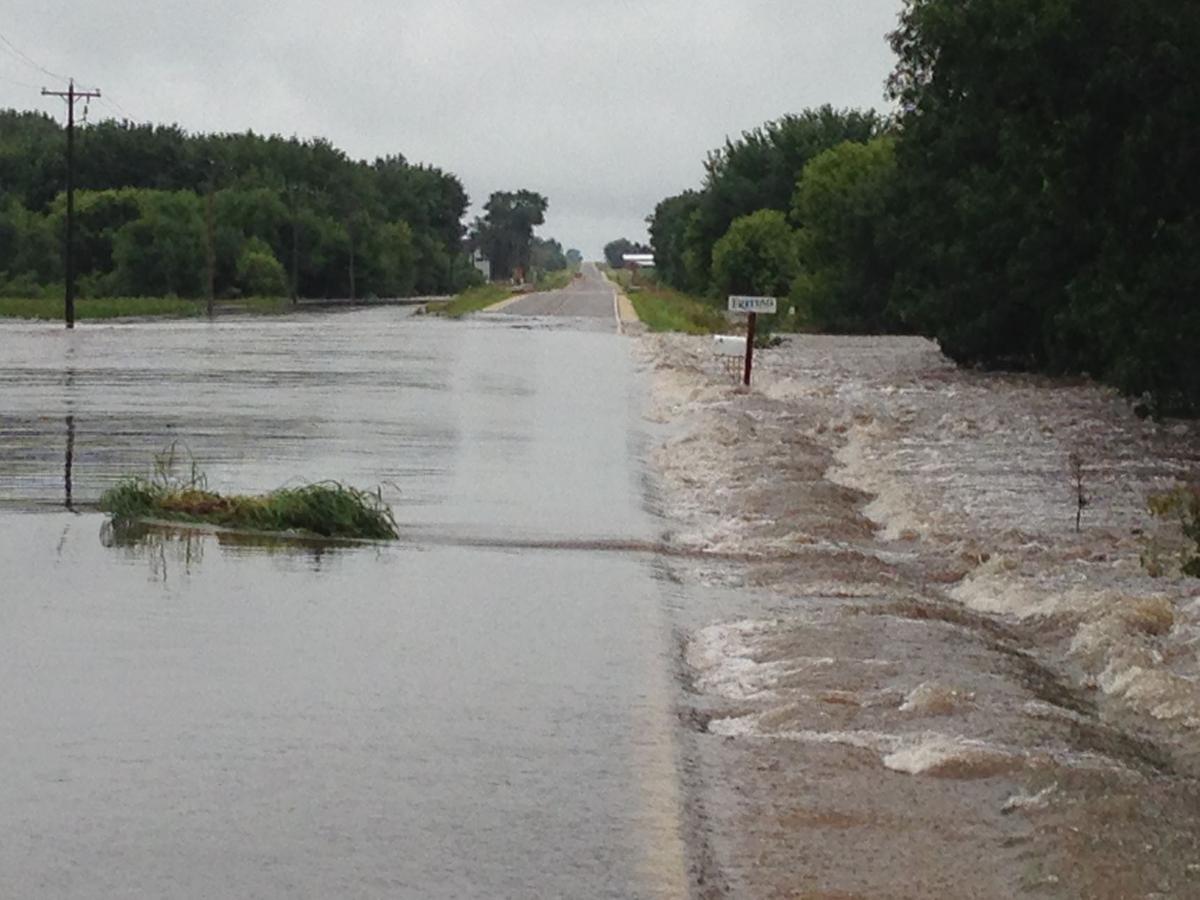 The 10000 block of Y Avenue south of Sumner is covered by flood waters Saturday. 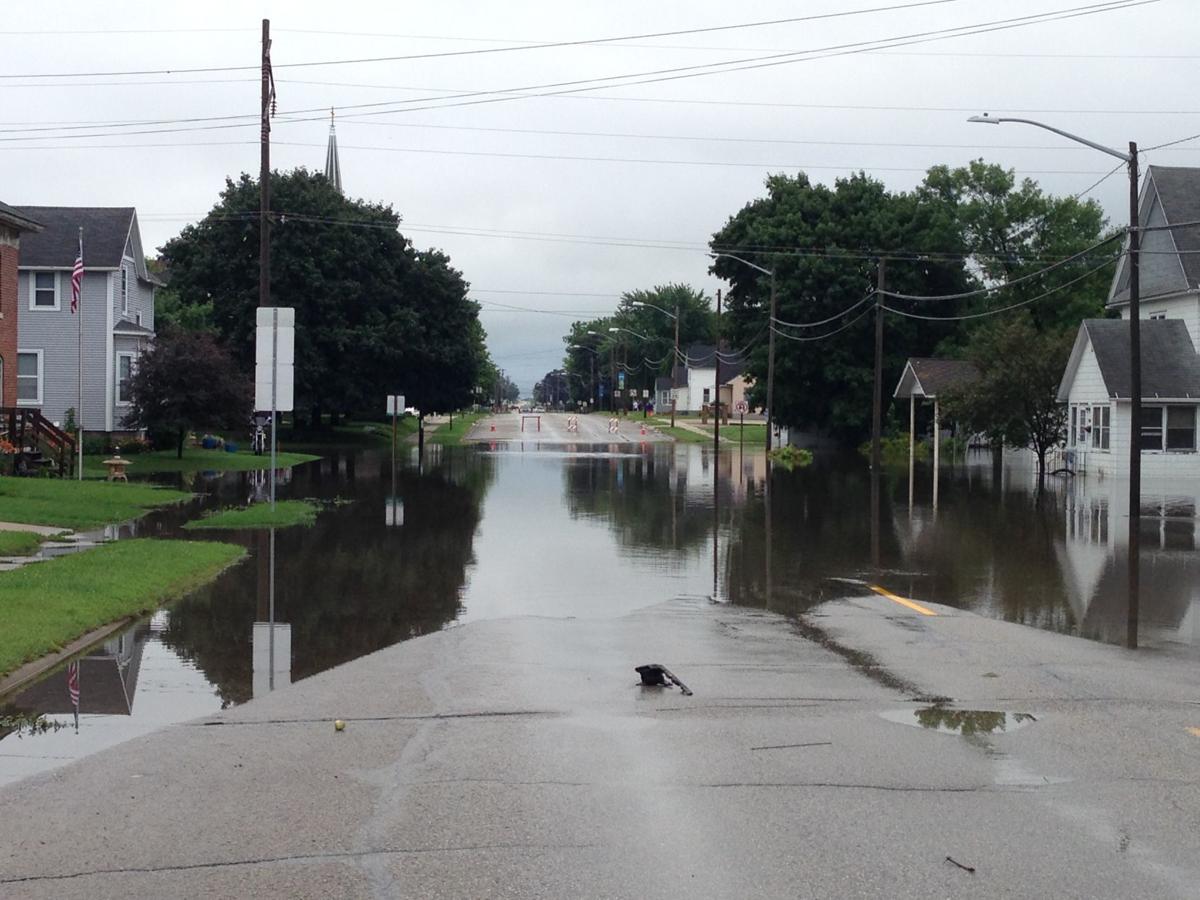 First Street in Sumner was covered in water during July 2017 flooding. 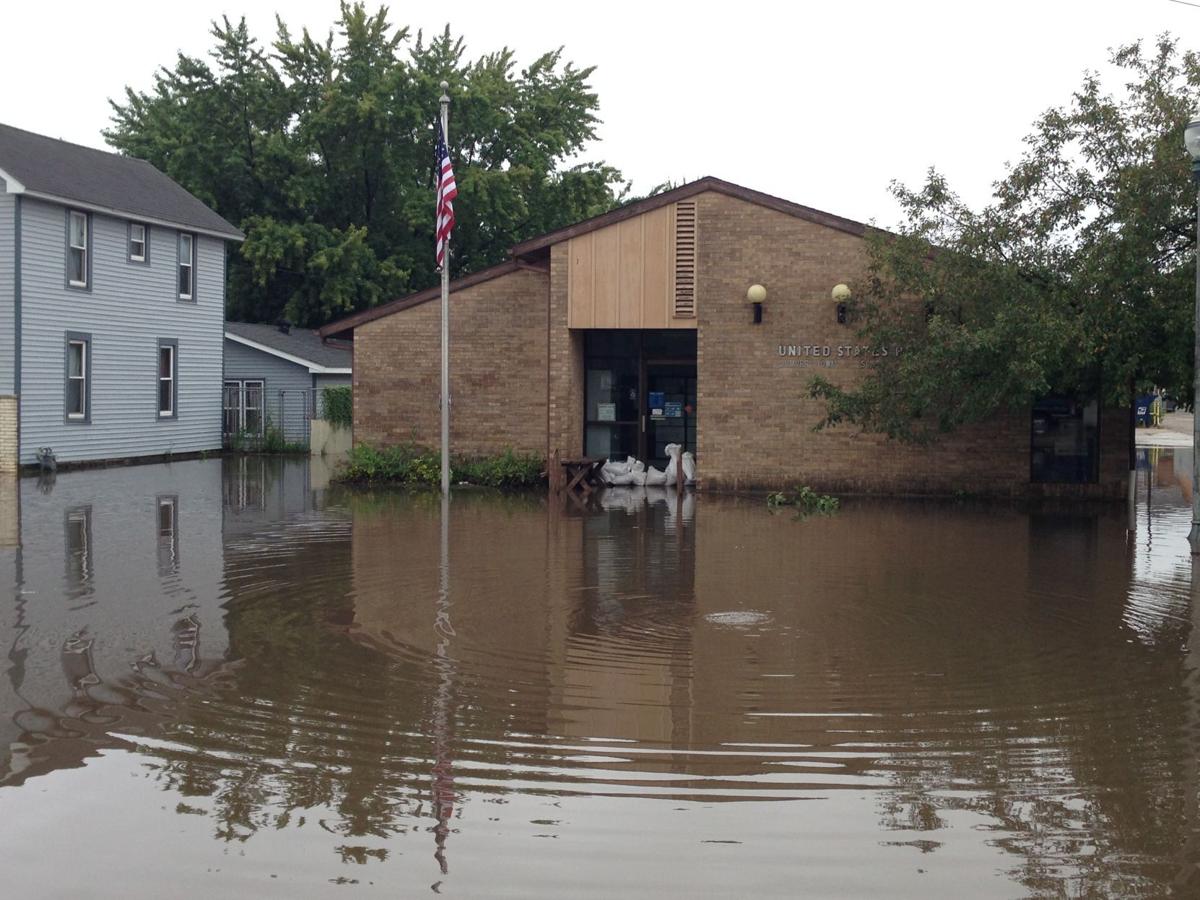 The Sumner Post Office on Saturday was surrounded by flood water from heavy rains that fell Friday. 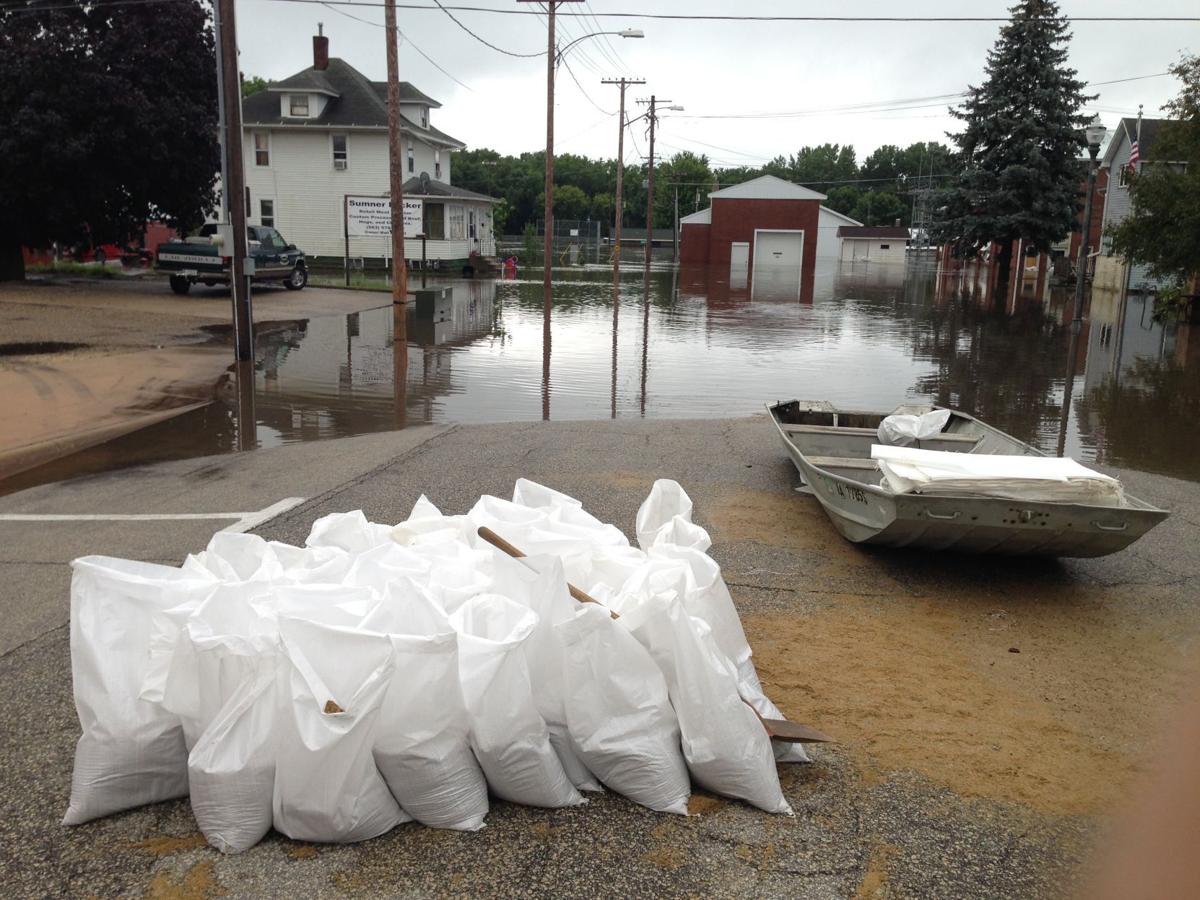 Sandbags wait to be used in Sumner, where heavy rains deluged the city with floodwaters Friday night and Saturday. 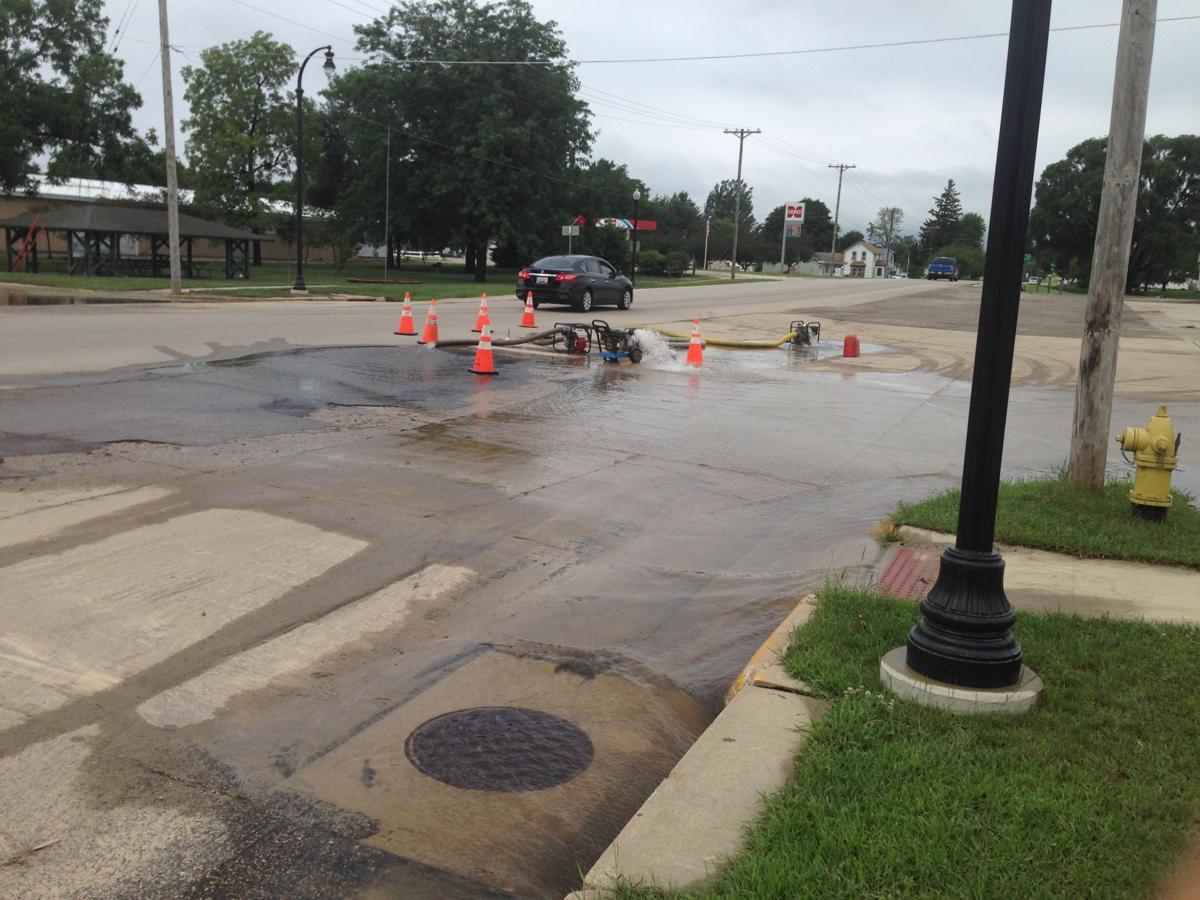 As much as 10 inches of rain fell near Fredericksburg during the stretch, according to one calculation. Fairbank and other area communities also were hard hit, many receiving 5 or more inches of rain Friday night and Saturday.

By Saturday evening, the waters had peaked or receded, but cleanup comes next.

In Sumner, everything was being done in the dark.

“It has receded. I haven’t heard whether we are going to get more water from the Wapsi coming south,” said City Clerk Lisa Oberbrockling as she sat in her office Saturday morning, illuminated only by a patch of light coming in through a window and the glow of her cellphone screen.

The Little Wapsipinicon River wasn’t so little as it wound through the city. How much rain Sumner got was not available Saturday, but some reports stated Fredericksburg to the north received 10 inches Friday.

The phones were out at City Hall in Sumner. The whole city was without electricity. Oberbrockling was routing everything through her cell, which is (563) 578-5609, for anyone with questions or needing assistance.

In addition to the power outage — the city’s main electrical carrier is down, and the municipal light plant that acts is a backup flooded — the city is under a mandatory boil order, and travel on city streets isn’t advised.

Bremer County Emergency Management set up a shelter before down Saturday as the second round of storms drove people from their homes.

Kip Ladage, with Emergency Management, said officials had planned to open the shelter at the school, but when the power failed they moved the operation to the chapel at the Hillcrest long-term care facility, which is powered by a backup generator.

As of Saturday morning, the shelter had about a dozen people, but Ladage expected more to arrive because of the lack of power.

Also on Saturday, the Sumner Post Office was forced to close due to the flooding. Officials said there is no timetable as to when it will reopen Postal operations were relocated to the Fayette Post Office at 201 E. Water St., Fayette. Hours are 9:30 a.m. to 1 p.m. and 3 to 4:30 p.m. Monday through Friday.

“The water alone had a very sizable footprint that we have not seen before. But then once we lost power, that shuts off sump pumps. So we may see a large portion of the community has been impacted,” Ladage said

He said the American Red Cross was assisting county officials. Staff and volunteers of The Salvation Army of Waterloo/Cedar Falls sent sandwiches, snacks and more than 1,500 bottles of water to aid flood victims and emergency service workers in the community. Additional resources were being brought in from Cedar Rapids to dispense food, water and flood kits throughout the evening and overnight hours.

Caribou Coffee and Einstein Bros. Bagels in Waterloo donated coffee and several hundred bagels for a breakfast for Sumner residents this morning.

Problems started around 8 a.m. Friday with flash flooding due to heavy rains, said Jeff Smith, a captain with the Sumner Fire Department.

The sandbagging operation started Friday outside the fire station. Volunteers said they went through three cement trucks worth of sand between Friday and Saturday.

The worst of the storms hit Friday night, and by early Saturday several homes had basements filled with water, and three or four suffered collapsed foundations.

Some reports estimate as much as 11 inches of rain fell in a 24-hour period, Oberbrockling said.

Smith said no injuries were reported, but firefighters executed one rescue —- a disabled woman whose home was surrounded by the flood.

“We used a Tommy lift on a pickup truck. We were still able to get in there. The water wasn’t that deep yet. We were able to get her out on her wheelchair, and got her to safety,” Smith said.

In Fredericksburg, numerous residents ended up with flooded basements when the storm passed through Friday night, said Ray Armbrecht, the city’s fire chief and wastewater superintendent.

Heavy rains overtook streets in town and pushed a creek east of town out of its banks, forcing water over the U.S. Highway 18 bridge and closing the roadway. Firefighters blocked the road until the water withdrew. The highway was later reopened, and Saturday Iowa Department of Transportation crews were working on repairs.

City pumps were working to clear water from storm sewers.

Flooding in Fairbank meant a couple had to alter their wedding plans.

The couple had planned a Saturday ceremony on the small island park in the Wapsi River in the middle of town with a reception to follow at nearby Costa’s Sport Bar and Grill, said Brittany Youngblut, whose mother, Denise Youngblut operates Costa’s with Kevin Kaufman.

“If felt terrible for them. They came yesterday (Friday) and set up. ... In here, they had a cake table, they had a backdrop set up. All the tables were decorated,” she said.

By Saturday morning, the river was starting to overtake Costa’s. The outcome of the nuptials wasn’t clear, and Youngblut said the couple was seeking a new venue.

As of Saturday evening, Costa’s had been spared the worst. Volunteers helped sandbag the establishment and a handful of businesses along the river banks — Don’s Trucks across the street, the historical society, the food bank and the funeral home upriver.

“From first thing this morning, all day long, more people showed up as the day went on,” Youngblut said. She said Costa’s lower level got water, but the upper level was dry, and employees had enough time to move items upstairs.

Jason Kayser with the Fairbank Fire Department said the community showed up to help their neighbors.

“Everybody is secure. We sandbagged the place, all the businesses and residences along the river. I think we are holding, and I think it’s dropping,” said Kayser and he and other residents gathered along the river on Main Street to relax after a day of hard work.

Crews prepared about 100 pallets worth of sandbags, with about 60 to 70 bags per pallet, Kayser estimated. He said there is a 12-pallet reserve for those who need it.

With the river cutting the city in half, and with the route to travel from one side to the other involving a 30-minute detour, the Dunkerton Fire Department agreed to assist with emergencies on the west side of town, Kayser said.

“We are not going to take our rig across this. We could probably drive a fire truck through, but an ambulance, it ain’t going to happen,” he said.

Driver missing after truck goes into river. PAGE A4

WATCH NOW: Summer at the Schoolhouse

This unknown detail about Stonehenge might blow your mind

This unknown detail about Stonehenge might blow your mind

New book aims to teach history of US civil rights

New book aims to teach history of US civil rights

LITTLETON — The public has had twice the typical amount of time to weigh in on a dam removal project here, but a meeting this week proved ther…

The city of Sumner is receiving more than $1 million in federal grant funds to help move its electric utility out of a flood plain.

The 10000 block of Y Avenue south of Sumner is covered by flood waters Saturday.

First Street in Sumner was covered in water during July 2017 flooding.

The Sumner Post Office on Saturday was surrounded by flood water from heavy rains that fell Friday.

Sandbags wait to be used in Sumner, where heavy rains deluged the city with floodwaters Friday night and Saturday.