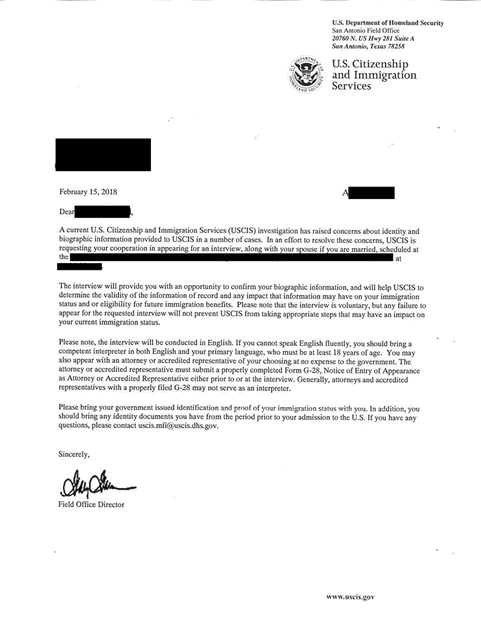 A copy of a letter sent to a Burmese refugee settled in Iowa, provided to The Courier by EMBARC. 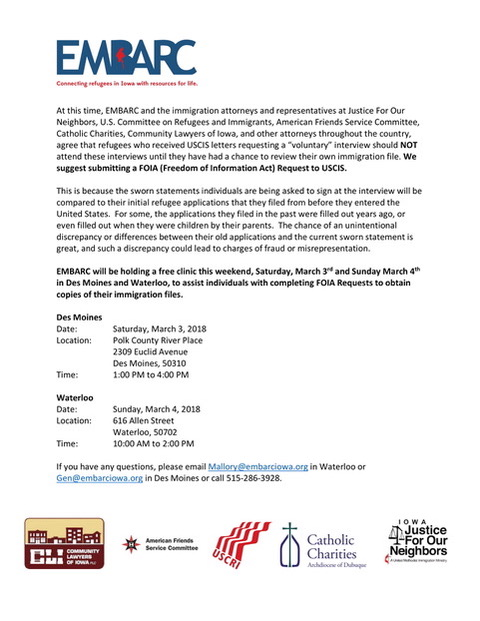 EMBARC's response to the letters sent by USCIS to Burmese refugees in Iowa, provided by EMBARC.

WATERLOO — A letter sent to at least 10 and possibly many more Cedar Valley residents from Myanmar has some residents — and the local refugee advocacy office — worried about the U.S. government’s intentions with regards to their legal status.

The letter, from the U.S. Citizenship and Immigration Services and sent to various Burmese refugees legally settled in Iowa and across the country, asks the receiver to “confirm your biographic information” to help the government “determine the validity of the information of record and any impact that information may have on your immigration status and/or eligibility for future immigration benefits,” according to a copy of a letter provided by refugee advocates at Ethnic Minorities of Burma Advocacy and Resource Center (EMBARC).

EMBARC notes the letters are legitimate, but the organization does not know what kind of information the government wants.

The letter asked recipients to travel at their own expense to various USCIS offices around the country, some within a few days of the letter’s arrival, and said neither a lawyer nor interpreter would be provided.

The interviews were “voluntary,” according to the letter, but also noted not appearing “may have an impact on your current immigration status.”

“The letters are pretty threatening — they threaten immigration status,” said Alicia Soppe, program director at EMBARC in Waterloo, which works with Burmese refugees settled in Northeast Iowa. “Any time you randomly get a letter questioning your immigration status, you get nervous. The whole thing was very unclear.”

According to the Des Moines Register, Sharon Rummery, a USCIS public affairs officer in San Francisco, said, “A current USCIS investigation has raised concerns about identity and biographic information provided to USCIS in a number of cases involving Burmese refugees, including many who have resettled in the U.S.”

She said in an email the USCIS sent 1,000 requests for interviews nationwide that “will help determine the refugee’s immigration status or eligibility for future immigration benefits.”

Letters started arriving a couple of weeks ago, said Rachel Cherput, a family advocate at EMBARC in Waterloo, and worried refugees started making appointments with EMBARC for help. Still others have gone to the interviews already, with EMBARC hearing of interviews that lasted up to four hours.

“Everyone just wants to do the right thing,” Soppe said.

But it’s unknown what consequences can come from attending the interviews, which worries EMBARC and other legal aid organizations they work with. They’re hearing of sworn statements taken during the interviews that may be compared with statements taken years ago, during a traumatic time in refugees’ lives or when they were children. They may have forgotten exactly what was said.

“In Myanmar, they did all the fingerprints, the background checks, already,” Cherput said. “How can this happen?”

More than 2,000 refugees from Myanmar, mostly Burmese of various cultural backgrounds fleeing war, have settled in eastern Iowa in the last decade, with hundreds more statewide. EMBARC knows of around 30 refugees from around Iowa that received letters from the government, but expects that number to climb.

“People were wondering, ‘Is this a scam? Does this matter or not matter?’ So we need to make sure we have legal support,” Soppe said.

To that end, EMBARC was hosting a free clinic this weekend, which continues from 10 a.m. to 2 p.m. today at 616 Allen St. in Waterloo, in conjunction with Justice For Our Neighbors, the U.S. Committee on Refugees and Immigrants, American Friends Service Committee, Catholic Charities, Community Lawyers of Iowa and other volunteers.

Refugees who have received letters are welcome to attend for free advice and help filling out a Freedom of Information Act request to USCIS for their immigration records. Those with a legal background who would like to assist may contact janine@embarciowa.org.

In the meantime, EMBARC is advising those who have received letters not to attend the USCIS interviews.

“This war everyone has fled has been going on for 70 years,” Soppe said. “(Coming to the U.S.) is the only safety people have felt. Now, they are scared to check their mailboxes.”

David’s Taphouse and Dumplings will open later this month in a new 3,600 square foot space at 200 West 1st Street .

The case was investigated by the Iowa Department of Inspections and Appeals.

UAW and Deere will resume negotiations Monday. If an agreement isn't reached by midnight Wednesday, workers will strike Thursday morning.

Police said she pulled out a .22-caliber revolver and fired eight shots into the air in an attempt to frighten away the attacking dog.

WATERLOO — Union leaders were in last-minute contract negotiations with Deere and Co. Wednesday afternoon as workers were hours away from a strike.

A Cedar Falls man has been arrested after he allegedly assaulted his girlfriend and officers who then tried to arrest him.

Firefighters rescued a boater who became stranded on the Cedar River Friday night.

A Waterloo man has been sentenced to a decade in prison for attacking a Texas man in May and leaving him with permanent brain damage.

A copy of a letter sent to a Burmese refugee settled in Iowa, provided to The Courier by EMBARC.

EMBARC's response to the letters sent by USCIS to Burmese refugees in Iowa, provided by EMBARC.