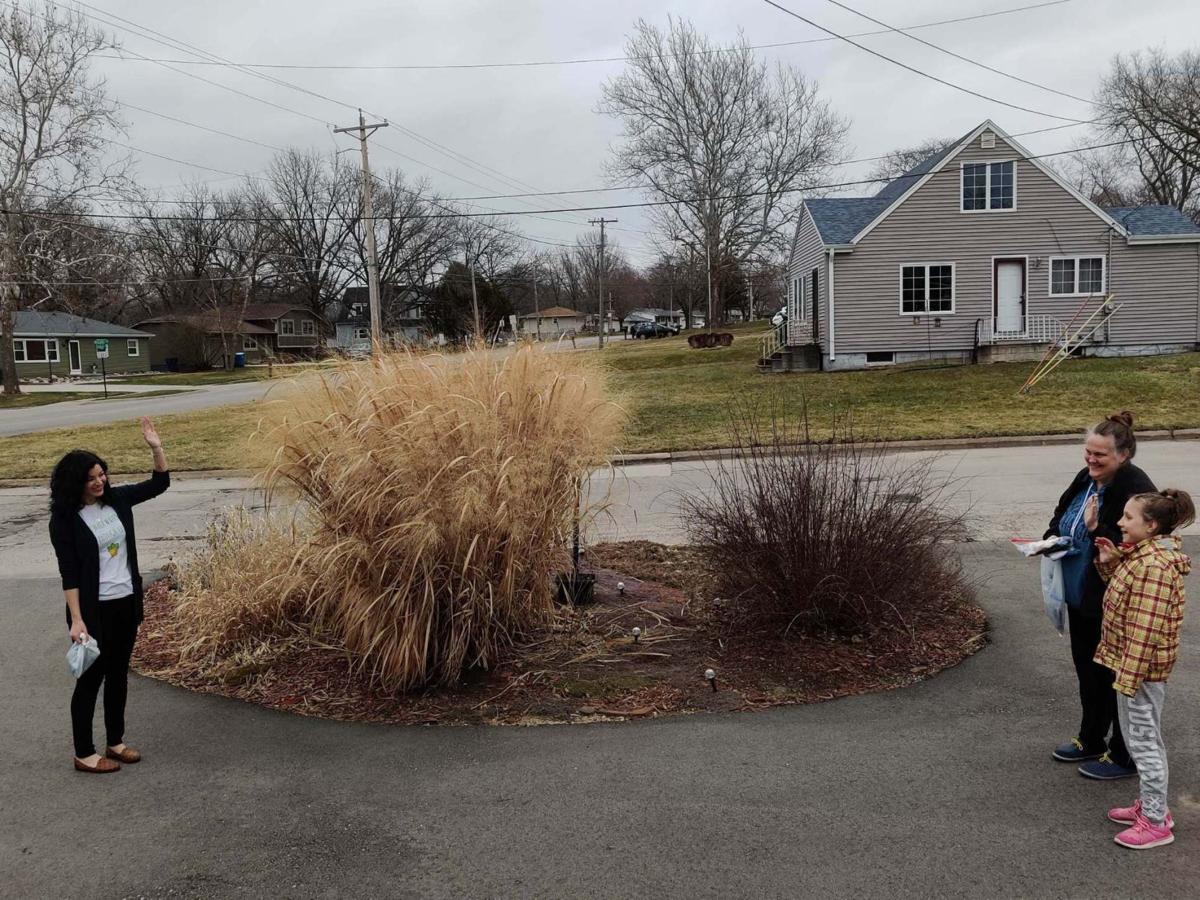 Emily Hess, left, waves to Melissa Sander, right, and one of her daughters from a safe distance as the two women coordinate a fabric drop-off at Hess' Cedar Falls home over the weekend. 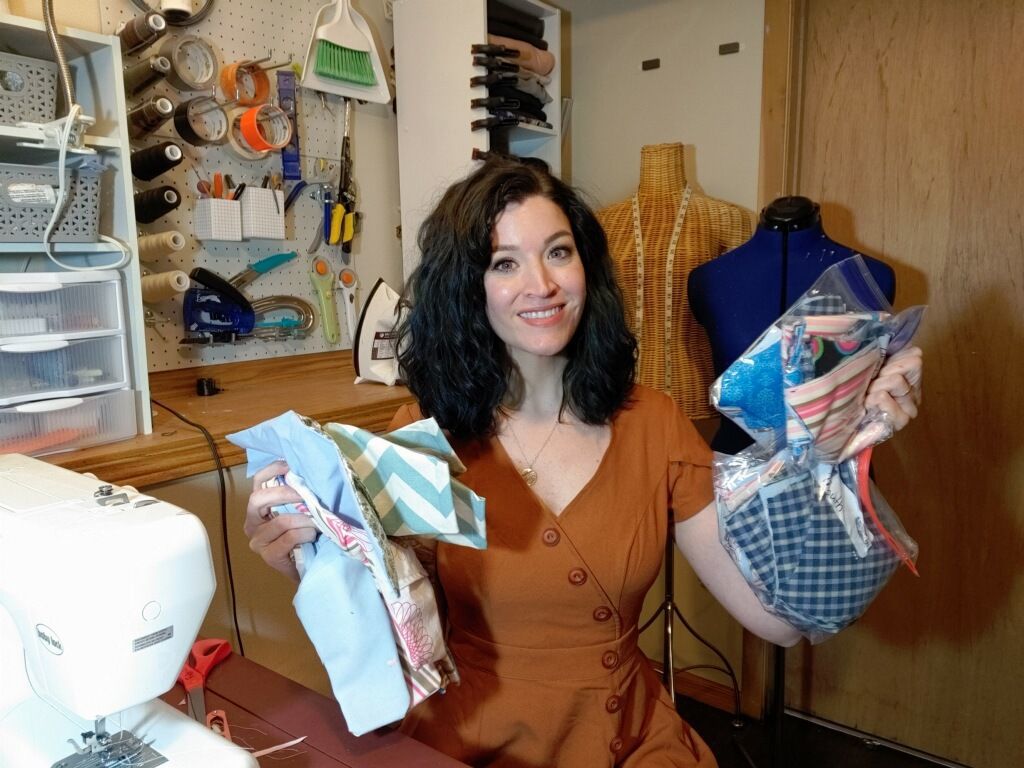 Emily Hess of Cedar Falls poses with fabric masks she's been making while holed up at home on Saturday, March 21, 2020. The masks are designed to go over top of clinicians' standard face masks, in order to help stretch the face masks' usability since they're in short supply.

CEDAR FALLS — Self-quarantined at home after the salon she works at closed last week, Emily Hess could have wallowed in self-pity.

Instead, she immediately started trying to find a way to be helpful, instead of helpless, during the global coronavirus pandemic. On Friday, she found one: Hospitals were asking for fabric covers that fit snug over their N95 masks, which are in such short supply organizations were looking for ways to extend their longevity.

“A friend let me know about the need for masks to preserve the limited PPE (personal protective equipment) for medical staff,” Hess said. “I found the different patterns requested and got started working through my sewing stash.”

People began reaching out, asking what Hess needed. That included Melissa Sander of Fairbank, who didn’t know Hess until she saw a friend post Hess’ appeal for help.

“I thought, ‘I have two girls at home and a little boy, and this is the most important thing — we’re gonna put everything aside and help this gal,’” Sander said.

Sander and her assembly-line workers — her 12-year-old and 10-year-old daughters — got to work cutting out cotton fabric from a pattern Hess sent their way. Sander then ironed them, and her 4-year-old son helped with clean-up duty.

Then, Sander packed up her work -- about 100 pieces -- drove from Fairbank to Cedar Falls and left it on Hess’ doorstep, both communicating from a safe distance.

“I met her by waving at her from her house,” Sander said of her new sewing buddy. “That’s what’s really cool — we saw the need.”

Hess then sewed each mask, using the now-hard-to-find 1/8th-inch braided elastic to make the covers. She then had several mask covers dropped off at UnityPoint-Allen Hospital in Waterloo, which had posted a pattern to its website and asked for donations.

Both stressed that the covers were not meant to serve as filtration for coronavirus, just to cover an N95 mask so it may be able to be reused more than once.

UnityPoint said it was still accepting mask covers, even though they briefly stopped taking them.

"We paused for a little bit to develop a better way to collect all of the donations and put them to use, which we were able to accomplish," said UnityPoint spokesperson Carson Tigges. He said the organization would be sharing more details on that new collection method Tuesday.

Hess and Sander were still making them, because Hess had orders from Peoples Clinic, a state prison, ambulance crews and even personal use.

“The orders keep pouring in,” Hess said. “I’m glad there are a lot of people out there doing what we are doing, because there is a huge need for them. I read that the U.S. will be getting a ton of PPE delivered in the coming days and weeks, and I really hope that’s true. But this is what we can do right now.”

The masks aren’t the only thing in short supply. Sander can no longer find the 1/8-inch braided elastic from Walmart. In lieu of that, Sander says they’ve been repurposing elastic hair ties.

“You do what you gotta do if you don’t have elastic,” Sander said. “Who would have thought we would ever come to this point?”

It’s the question on everyone’s mind as COVID-19 continues to be the scourge of the world. But Hess and Sander continue to do their part to help, and those looking to donate supplies or volunteer were asked to email teamhessander@gmail.com.

“We are two people who never met, but who are trying our best to make a bad situation better for people,” Sander said.

Editorial: The veil of confidentiality in COVID-19 cases

Whether HIPAA is outdated has provoked a debate in the medical community.

Responding to a pandemic: Tips on helping children understand the coronavirus threat

Tesidents may continue to renew their pet license by mail and the city will waive the $1 license mailing fee.

Unlike the president, Reynolds said she will not make predictions or put timelines on such actions.

A roundup of state government and Capitol news items of interest for Tuesday.

Black Hawk County has one new positive case of coronavirus, with local health officials saying it was not related to the other three cases but was travel-related, meaning the county currently had no documented community spread as of Tuesday.

Families delay funerals, putting grief on hold to adhere to restrictions that limit gatherings to 10 or fewer people.

Rydell Chevrolet is donating to the Northeast Iowa Food Bank COVID-19 Emergency Fund Campaign for every oil change it does from now through the end of April.

Prepare your pantry with purpose, not panic

"We all need to take a step back and approach our shopping rationally and not have such a knee-jerk reaction to rush out buy lots of food." That's the advice from ISU Extension nutrition and food science experts.

Emily Hess, left, waves to Melissa Sander, right, and one of her daughters from a safe distance as the two women coordinate a fabric drop-off at Hess' Cedar Falls home over the weekend.

Emily Hess of Cedar Falls poses with fabric masks she's been making while holed up at home on Saturday, March 21, 2020. The masks are designed to go over top of clinicians' standard face masks, in order to help stretch the face masks' usability since they're in short supply.