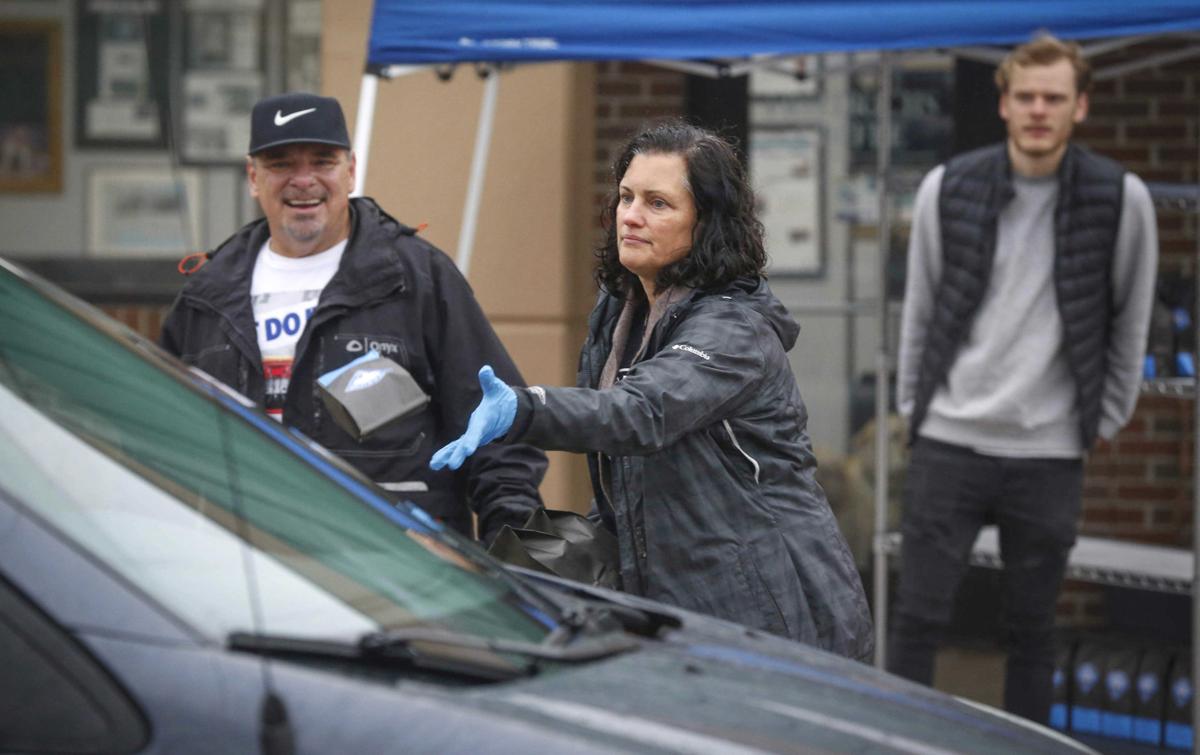 Colleen Meyer, owner of Friedrichs Coffee, throws a bag of coffee into a car window at Friedrichs Coffee in Urbandale, Iowa, on Saturday. Meyer spent Saturday morning giving free bags of coffee to residents to help pull the community together as residents spend more time isolated in their homes due to the Covid-19 coronavirus. 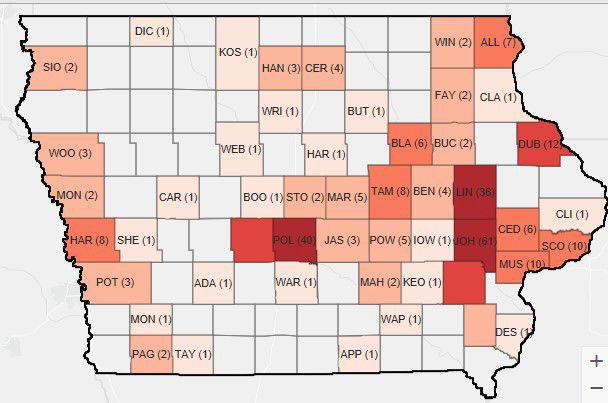 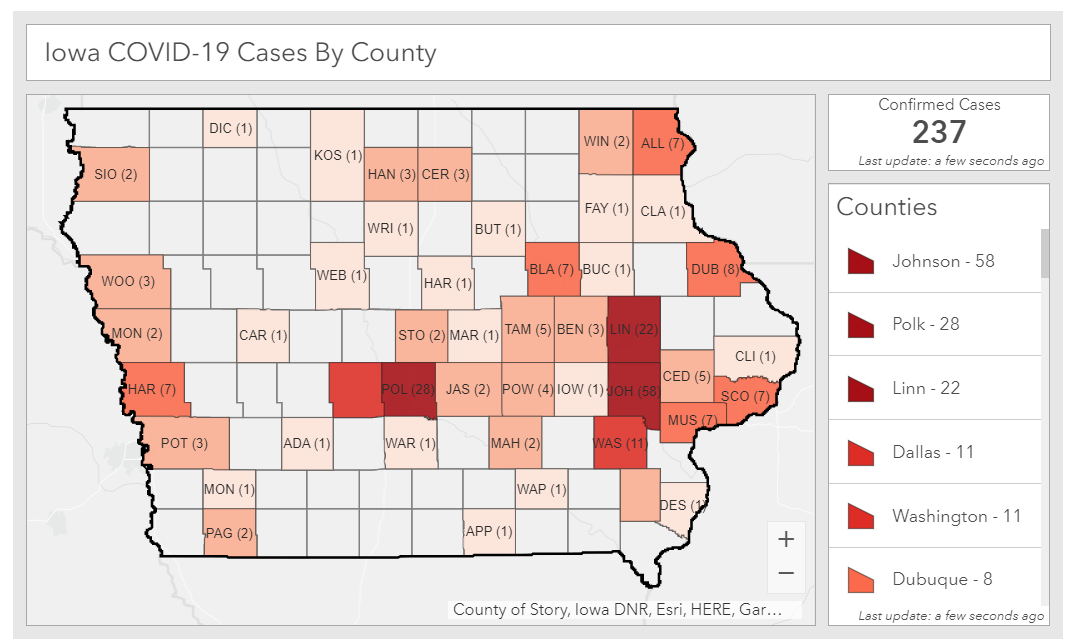 The number of cases of coronavirus in Iowa per county as of March 27, 2020, according to the Iowa Department of Public Health.

JOHNSTON — The state on Saturday released its latest numbers on those afflicted with COVID-19.

The Iowa Department of Public Health has been notified of 64 additional postive cases in Iowa for a total of 298 positive cases (a previously identified positive case in Black Hawk County is not from Iowa).

There have been a total of 4,375 negative tests to date, which includes testing reported by the State Hygienic Lab and other labs.

Iowa’s death toll from the novel coronavirus has risen to at least three elderly individuals as the virus has spread to almost half the state’s counties.

Officials with the state Department of Public Health reported Friday that two more Iowans have died from COVID-19 and an additional 56 residents have tested positive, bringing the total number of confirmed known cases of coronavirus to 235 in Iowa.

Earlier this week, health officials reported a virus-related death involving a Dubuque County resident whose age was between 61 and 80 years old.

During a Friday afternoon news conference, Gov. Kim Reynolds offered her prayers and condolences to the families who lost loved ones.

Sarah Reisetter, the Health Department’s deputy director, said one of the victims had underlying health issues.

But no other details — such as when they were tested and whether they were hospitalized — have been released.

The governor also defended tough decisions she has made in closing schools and businesses and invoking other measures to slow the spread of the virus that has now proven more deadly in the United States than in other countries.

Reynolds grew emotional for a brief moment while addressing claims by some that the threat of COVID-19 is being overblown and that actions like business closures are an overreaction to the situation.

“Iowans are scared and they’re nervous and I appreciate that,” Reynolds said as her voice cracked. “But we’re going to get through it and if you keep doing what we’ve asked you to do, we will be back to those good days. So hang in there.”

Reynolds told reporters she has confronted “some of the hardest decisions that I have had to make as the governor of this great state, but it’s also necessary.”

“I have to do what I can to protect the well-being of Iowans, especially the most vulnerable Iowans,” she said. “The last thing that I want to do is impact families and individuals and our businesses that are the backbone of our economy. So as the governor of this state I can assure you that the last thing that I want to issue is an order that shuts down a business.”

Earlier this month, the governor declared a statewide public health disaster emergency that included limiting gatherings to 10 people and closing bars, restaurants, casinos and other businesses. She has since expanded the order to include a wider range of Iowa businesses while excluding food stores and essential services.

Reynolds said she took the extraordinary action in activating the public health response and recovery aspects of the state disaster emergency plan to slow community spread of the virus. She said the state soon will face a new test as Iowans return from spring break, adding “we encourage very strongly” that individuals who traveled outside of the state voluntarily self-isolate for 14 days as a virus precaution.

Since COVID-19 was first confirmed March 8 in Iowa, there have been 3,740 negative tests, which includes testing reported by the State Hygienic Lab and others.

“We anticipated, as we tested more, the number of positive cases to continue to rise,” Reynolds said. “We think we’ll probably see that through next week as well and hopefully once we get to (March 31) or kind of the time line where we’ve implemented some of the policies, we’ll start to see that hopefully flatten and eventually maybe, maybe tick down.”

Reynolds and state public health officials have met with health professional, hospital administrators and others to discuss their “surge capacity plans” and prospects for coordinating regional approaches to meeting patient demand if necessary. She hopes to reconvene the interested parties next Thursday to continue the discussions about ongoing health care challenges.

Currently, 32 Iowans are hospitalized with coronavirus symptoms, according to Health Department data posted at coronavirus.iowa.gov/#CurrentStatus.

Photos: Coronavirus in the Cedar Valley

Effective immediately, children do not have to accompany the adults picking up grab-and-go meals at Iowa’s 303 meal sites, most of them at K-12 schools.

In an effort to help slow the spread of the novel coronavirus in Iowa, the state’s court system was largely shuttered by a March 17 order by Iowa Supreme Court chief justice Susan Christensen.

"Our incident command center has been in the process for weeks for all the what-ifs. We are preparing for a surge we hope doesn’t happen.”

Teachers in Hudson and Cedar Falls organized parades and drove past students' homes as schools finished the second week of a shutdown to help stop the coronavirus from spreading.

Colleen Meyer, owner of Friedrichs Coffee, throws a bag of coffee into a car window at Friedrichs Coffee in Urbandale, Iowa, on Saturday. Meyer spent Saturday morning giving free bags of coffee to residents to help pull the community together as residents spend more time isolated in their homes due to the Covid-19 coronavirus.

The number of cases of coronavirus in Iowa per county as of March 27, 2020, according to the Iowa Department of Public Health.