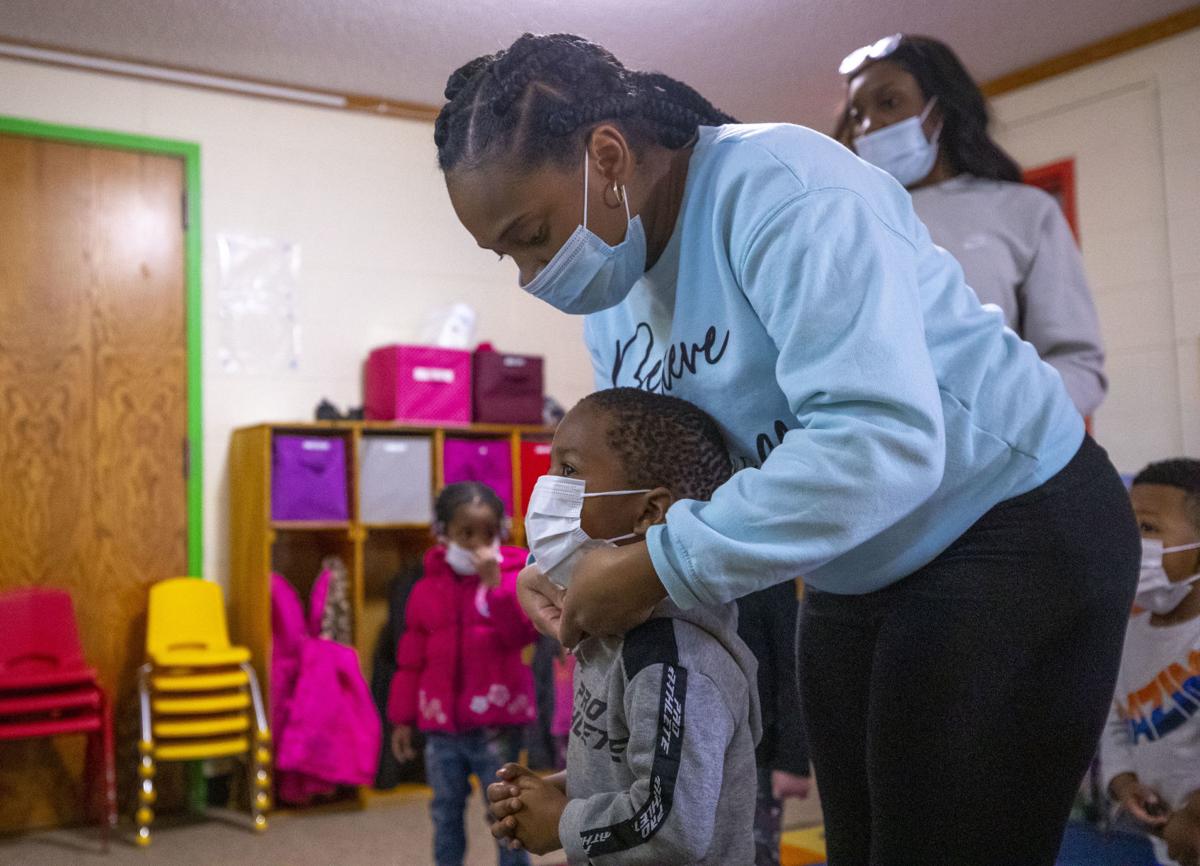 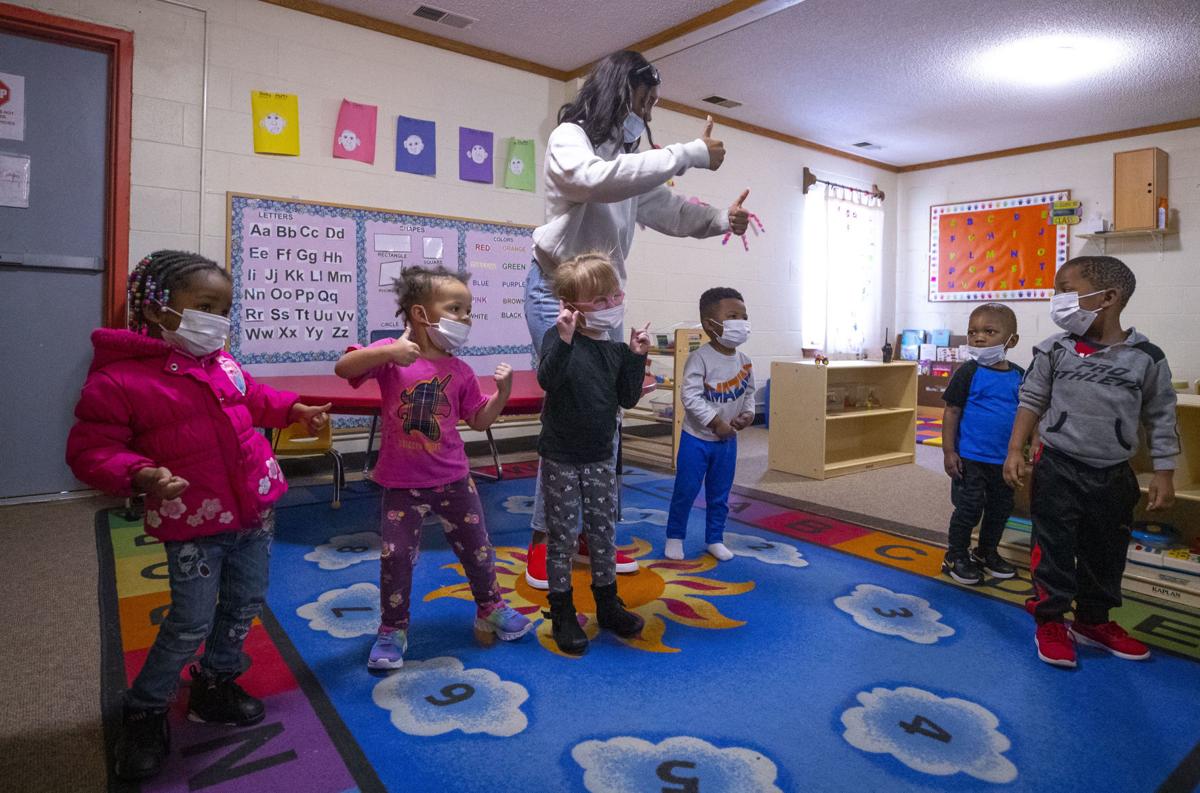 Alex Weatherby, a teacher at SAFE Care Learning Center in Waterloo, center, leads a class in a counting game on Wednesday. 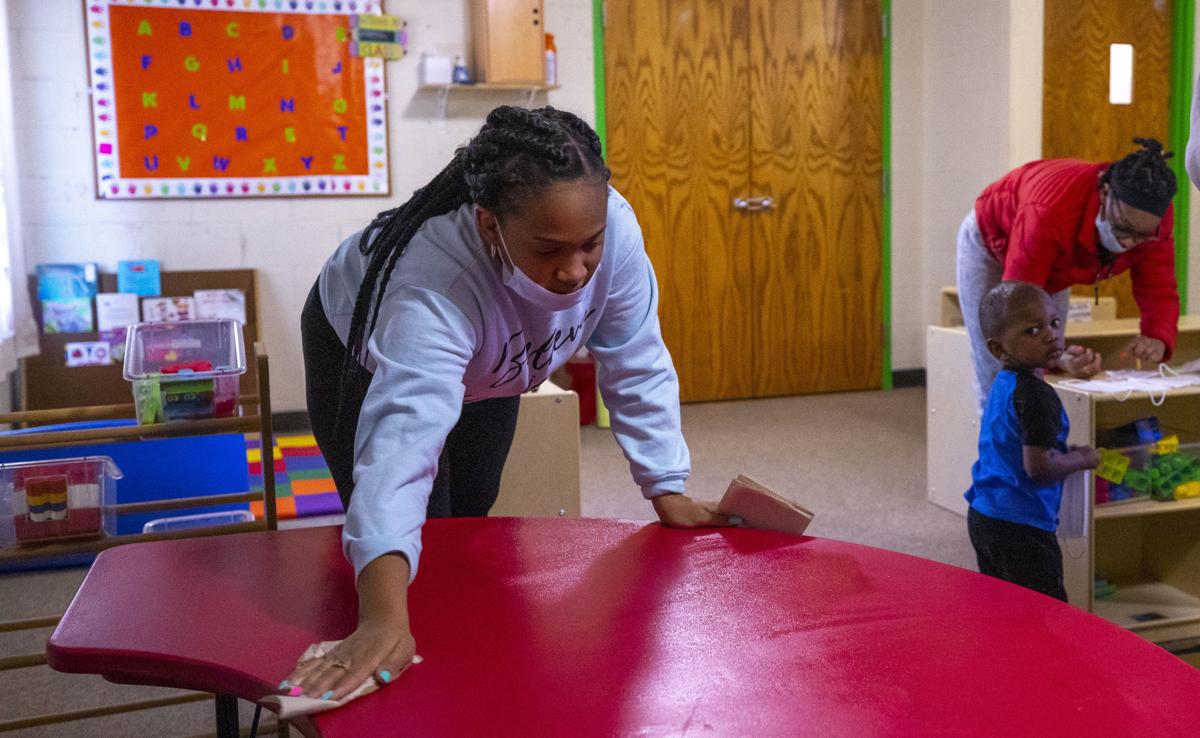 Kalaziah Bruce, a supervisor at SAFE Care Learning Center in Waterloo, sanitizes a table in a classroom on Wednesday.

WATERLOO — In March of 2020, Kimberly Kemp ran her round-the-clock, 6-day-a-week child care center at 85% capacity and had 28 people on staff.

A month later, her center closed down as a precaution to try to stop the spread of coronavirus. Right after that, the outbreak hit Tyson Fresh Meats in Waterloo.

By the end of the whirlwind, she had lost nearly half of her staff and a quarter of her children. A year later, she still isn’t back to where she was.

Every two weeks, she shuts down for the day and uses a fog disinfectant throughout the center. Teachers struggle to keep squirmy kids wearing masks. And Kemp has had to turn away sick kids to keep the virus out, even as she knows their parents have nowhere else to turn for care.

“It was just a catastrophe — increased costs, increased everything — and less of what our kids really need, which is that simplicity of playing while they learn,” said Kemp, CEO of SAFE Care Learning Center in Waterloo.

Cedar Valley parents already knew child care options were slim: Between 2011 and 2016, 42% of child care providers left the field completely, according to the Iowa Women’s Foundation, which has highlighted child care access as a top barrier to women’s economic self-sufficiency.

Gov. Kim Reynolds’ office noted that in the past five years, 33% of the state’s child care businesses had disappeared, leaving an estimated 350,000 Iowa children with no place to go.

“There are many counties in Iowa that have no child care — zero,” said Lesia Oesterreich, state specialist for early childhood programs for Iowa State University Extension and Outreach. “That was really a dilemma for many counties just struggling to attract businesses and industry, and keep young people in their communities. And then the pandemic hit.”

Getting more child care providers trained and running their own businesses was key to increasing the number of providers in communities in recent years, though it hadn’t been easy.

In 2015, Mary Janssen, children and family services director at Child Care Resource and Referral of Northeast Iowa, went looking for a $150,000 grant to remodel a building into a large child care facility and kept striking out.

“It was just frustrating. Tennis courts were given money and child care wasn’t given money,” Janssen said. “We would have served 80 children at that location.”

They worked to find other solutions, partnering with Hawkeye Community College a few years later to accept 56 children at a new center in downtown Waterloo, and are expanding other partnerships with places like Western Home Communities in Cedar Falls.

Because of their work, and a new Black Hawk County Child Care Coalition, which started in 2017, families started to have more options. SAFE Care opened during that time as well, in 2016.

But last spring, COVID-19 changed everything. Schools closed down when coronavirus cases started to rise. Centers stepped up health protocols, meaning kids with symptoms were turned away. And caregivers themselves stepped away to care for themselves or a family member, or simply to avoid catching the virus.

Amid all of that, child care costs in Iowa increased 60% during the pandemic, rising from an average of $9,443 per year per child to more than $15,000, according to a study done by Lending Tree.

“It was kind of like the perfect storm,” Oesterreich said.

Janssen said more than a quarter of child care providers in Black Hawk County had to close temporarily. The ones that stayed opened worried about losing kids, losing employees or losing their funding.

“It was stressful for them,” Janssen said.

With few places to provide care during their work shifts, parents who couldn’t work from home often dropped out of the workforce entirely, to the tune of around 700,000 Americans, two-thirds of whom were women, in 2020 alone, according to the Center for American Progress.

The past year has made Kemp realize how important her services are for her families, 90% of whom are low-income and use the state’s Child Care Assistance program to help pay for care. The fact that so many of her families use that funding, she believes, saved her business.

“I was told by different agencies that I wasn’t going to make it if I was going to solely rely on Child Care Assistance,” Kemp said. “And look here, 2020 revealed that worked.”

She needs that funding for the personal protective equipment, cleaning, ventilation and other supplies needed to keep SAFE Care running as the pandemic continues.

“It’s going to be the way it is,” Kemp said, noting she sees it as the new normal. “I see good things. We are heavily relied on.”

The Iowa Legislature also has introduced legislation this year that would double the maximum net income threshold for child care from $45,000 per year to $90,000, as well as giving tax credits to develop or expand child care facilities that also add jobs.

Businesses, too, are realizing how important child care is, including ones that sent their employees home to work remotely this past year, said Dan Levi, who helps lead the Black Hawk County Child Care Coalition.

“(Managers are) concerned about (workers’) productivity, they’re concerned about their mental health, and then you’re trapped at home and your kids are driving you nuts,” Levi said. “Companies are really starting to understand that (child care) is a need — and it affects their bottom line.”

Businesses that choose to become financial partners will secure a guaranteed number of enrollments for employees’ children.

"Literally everything pays better. It's pretty bad when a step up is going to McDonald's."

Alex Weatherby, a teacher at SAFE Care Learning Center in Waterloo, center, leads a class in a counting game on Wednesday.

Kalaziah Bruce, a supervisor at SAFE Care Learning Center in Waterloo, sanitizes a table in a classroom on Wednesday.