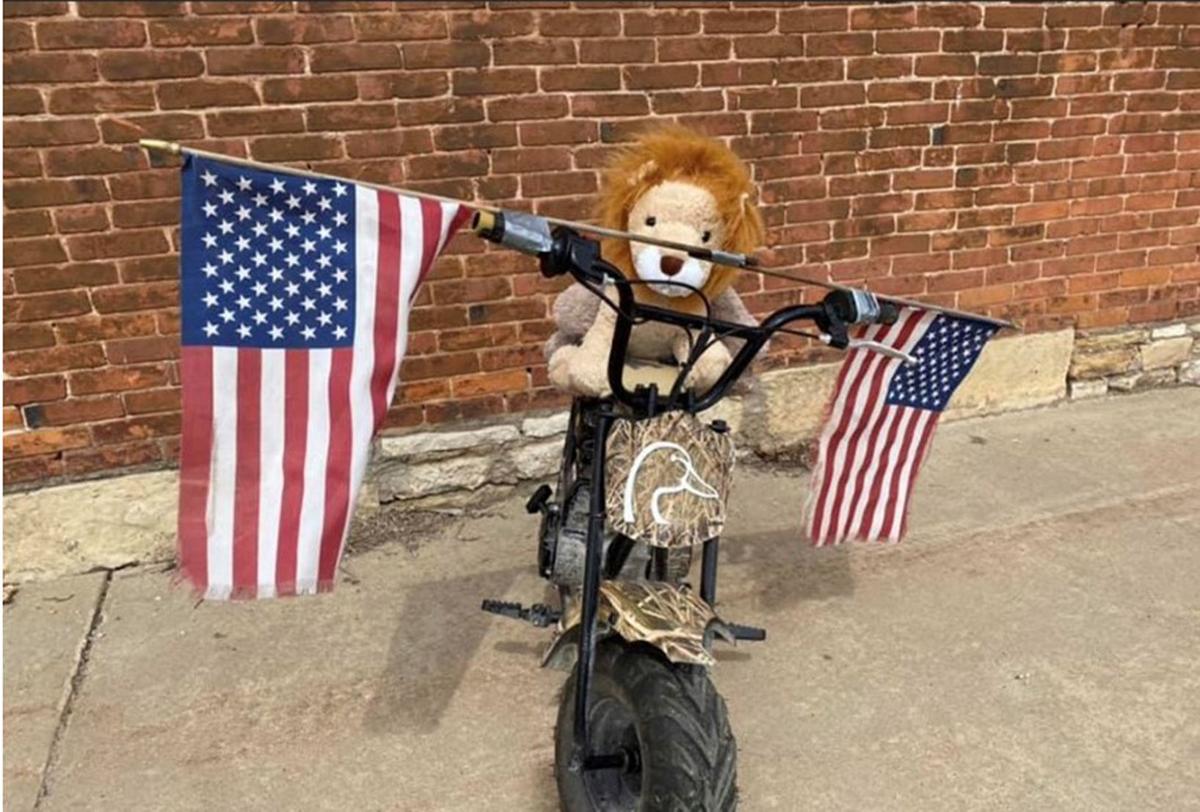 Stuffed lions on bikes, teddy bears in windows -- all could be found during a neighborhood scavenger hunt in Clarksville. The hunt was inspired by the illustrated children's book, "Going on a Bear Hunt." 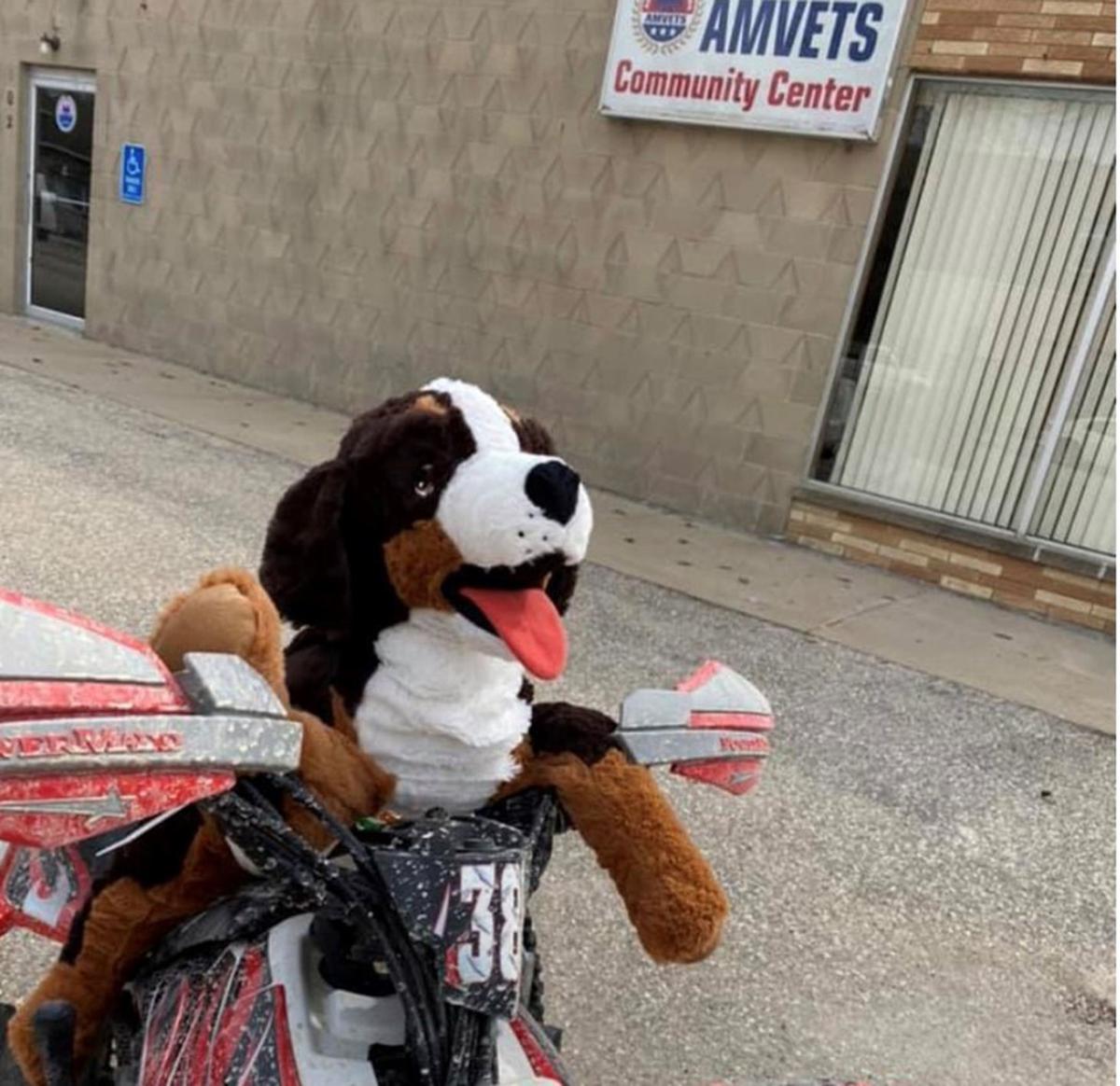 A stuffed dog was just one of the stuffed animals children found on a Clarksville scavenger hunt inspired by the children's book  "Going on a Bear Hunt."

WATERLOO — “We’re going on a bear hunt. We’re going to catch a big one. What a beautiful day! We’re not scared.”

Jordan Stirling’s three children found more than 250 bears hiding out in their community of Allison last week. They weren’t in danger — these bears were the adorable and cuddly stuffed variety.

“My children loved it. It got everyone’s mind off what is going on in the world with the coronavirus,” said Stirling, human resource director for North Butler Schools and Clarksville School District.

The award-winning children’s book originally published in 1989, “Going on a Bear Hunt” by Michael Rosen, is inspiring and uniting neighborhoods across the U.S. and the world who are self-isolating during the COVID-19 pandemic. The bear hunt idea has been floating around social media for several weeks.

In Northeast Iowa, in communities like Cedar Falls, Raymond, Clarksville and Allison, children ventured out last week with their parents in search of stuffed teddy bears displayed in windows of homes and businesses. Some communities like Greene staged a stuffed animal scavenger hunt with monkeys, snakes and other critters added to create a menagerie.

Foot traffic has exploded on Grand Boulevard in Cedar Falls when news spread that houses were participating in the bear hunt, said resident Sally Goodenbour. When she began noticing bears popping up in windows on her frequent walks, she Googled it and found that it’s a global movement meant to cheer up children stuck at home. It also shows solidarity during the pandemic.

While one or two teddy bears on display is typical, Goodenbour noticed one home featured the entire Care Bear entourage in its picture window.

Parents are happy to have a fun activity to share with children, Stirling said. While some families drive, others are walking the sidewalks in their neighborhoods, getting some exercise and fresh air while keeping the appropriate six feet of distance with other families on the hunt.

Stirling heard about a successful Clarksville stuffed animal hunt, organized by April Hoodjer, where 190 animals were counted in three hours, including stuffed bears, a white tiger, lion and dog.

“I thought my children — ages 3, 5 and 8 — would love doing this, and I threw out the idea to our community. The town ran with it, and we had a blast. I haven’t seen my kids having that much fun in a long time, counting the bears and keeping a tally on a chart.”

Her children spied more than 250 bears on the Allison scavenger hunt.

“We’re a tight-knit community, and everyone wanted to show their support and send out a message that we’re in this together,” Stirling explained.

Teddy bear hunts, along with rainbows on windows to lift spirits, aren’t the only social media movements taking place. Several Facebook groups, including “A World of Hearts” and “Hearts in the Window” are asking the public to place cut-out hearts on windows. The symbol shows support and love and says “thank you” to essential workers, including doctors, nurses other health care workers, first responders, grocery store employees and truck drivers.

“I know in our communities of Allison, Clarksville and Greene, hearts are going up in windows and heart hunters are going out to count them,” said Stirling. “Coronavirus has definitely brought people together, even though we’re all tucked away in our own homes. I also think it’s brought people back to hearth and home — home-cooked meals, playing with the kids, spending time together as a family.”

Raymond Mayor Gary Vick is delighted the bear hunt in going on in his community.

“Just kind of that community involvement, trying to pacify the children,” he said.

“They’re adapting very well, and they’re keeping their social distance,” he said. “I’m just amazed at my community for what they’ve done.”

It was a wedding the likes of which no one in Mason City has seen before.

For those looking for comfort and companionship while social distancing during the COVID-19 outbreak, the Humane Society of North Iowa may have a solution.

Z'Mariks' newest offer: Buy a bowl, get a roll

Scott Akers, the owner of Z'Mariks Noodle Cafe in Mason City, is doing his best to make people smile in these uncertain times.

I've been watching various Facebook groups and there's a common theme here in North Iowa: People need help and others are stepping up.

Good Shepherd residents get the word out to their loved ones

Good Shepherd staffers found a creative way for their residents to communicate with their loved ones.

On a seemingly average weekday, 71-year-old Gary Hanson’s workout at the Mason City Family YMCA began like any other.

As Julie Baldwin Bublitz turns 13 today, she plans to use the fact that she is a new teenager as an excuse for all potential future misbehavior.

Laura Baumann and her husband, John, were all smiles Friday morning.

Christmas spirit at the Nora Springs Care Center is still going strong — thanks to the generosity of a group of donors.

Logan’s lift: Mason City comes together to raise $3K for child with disabilities

It took less than 24 hours for the community to lift up a Mason City family.

In the battle for Mr. and Ms. Wrestler, fans will get to have their say.

'It's all them': Mohawk Bakery lets students think on their feet

The Mohawk Bakery in Mason City High School has seen a few changes this year.

BRITT | The Britt Area Food Bank has been feeding the hungry since 1986.

Rydell Chevrolet is donating to the Northeast Iowa Food Bank COVID-19 Emergency Fund Campaign for every oil change it does from now through the end of April.

This is a new direction since Monday, when Reynolds said at a news conference that local officials could take such action if they felt it right for their communities.

“Spring is nature’s way of saying, ‘Let’s party!” That’s comedian Robin Williams description for one of our favorite seasons, when the ground …

A Virtual Visit allows patients to meet with their local MercyOne provider through video chat without leaving home.

In the midst of COVID-19 uncertaintly, people still love eating great food -- and are seeking it out to-go or delivery at local restaurants who are struggling to keep their doors open.

Dunking produce in soap and water, even if you rinse well, will likely leave behind soap residue that can cause stomach upsets, nausea and vomiting.

A former Waterloo musician has died from coronavirus in Crystal Lake, Ill.

Pews will be empty at Cedar Valley churches on Good Friday and Easter, but pastors will offer their uplifting, hopeful message of Christ's rebirth online and through social media platforms.

Stuffed lions on bikes, teddy bears in windows -- all could be found during a neighborhood scavenger hunt in Clarksville. The hunt was inspired by the illustrated children's book, "Going on a Bear Hunt."

A stuffed dog was just one of the stuffed animals children found on a Clarksville scavenger hunt inspired by the children's book  "Going on a Bear Hunt."