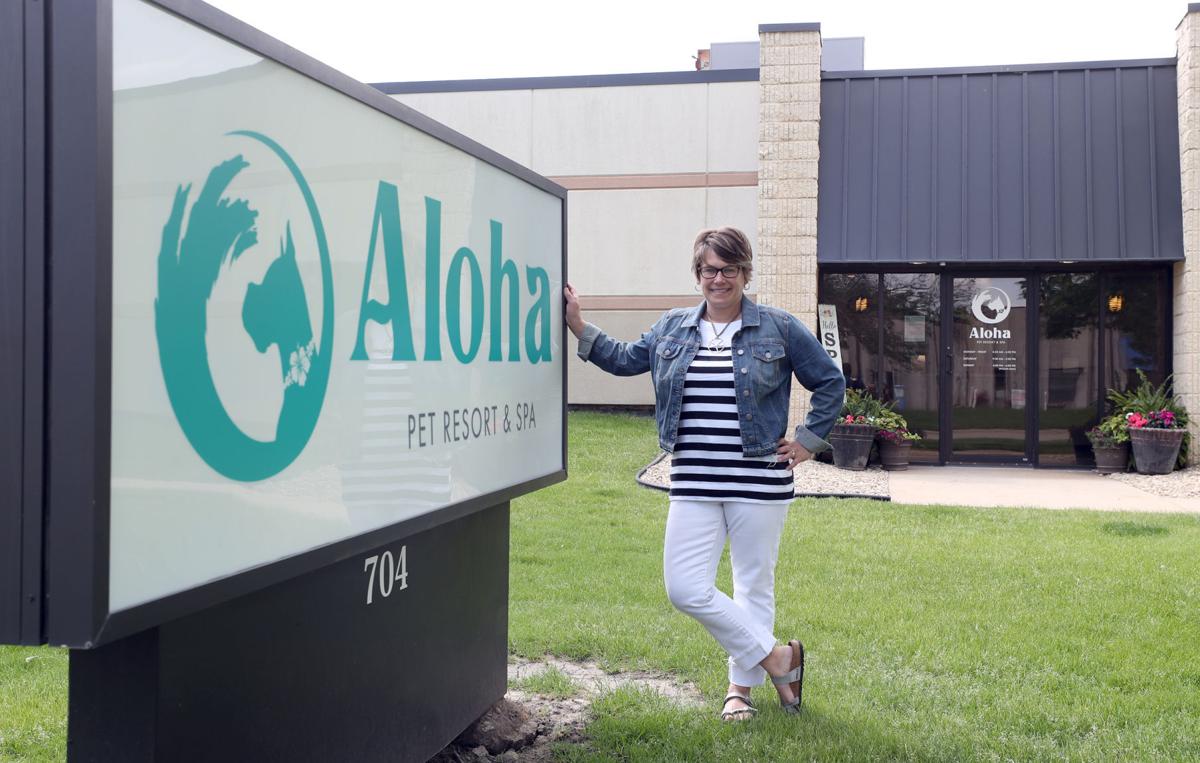 Heather Robson, owner of Aloha Pet Resort and Spa, stands in front of her business in Cedar Falls Thursday. 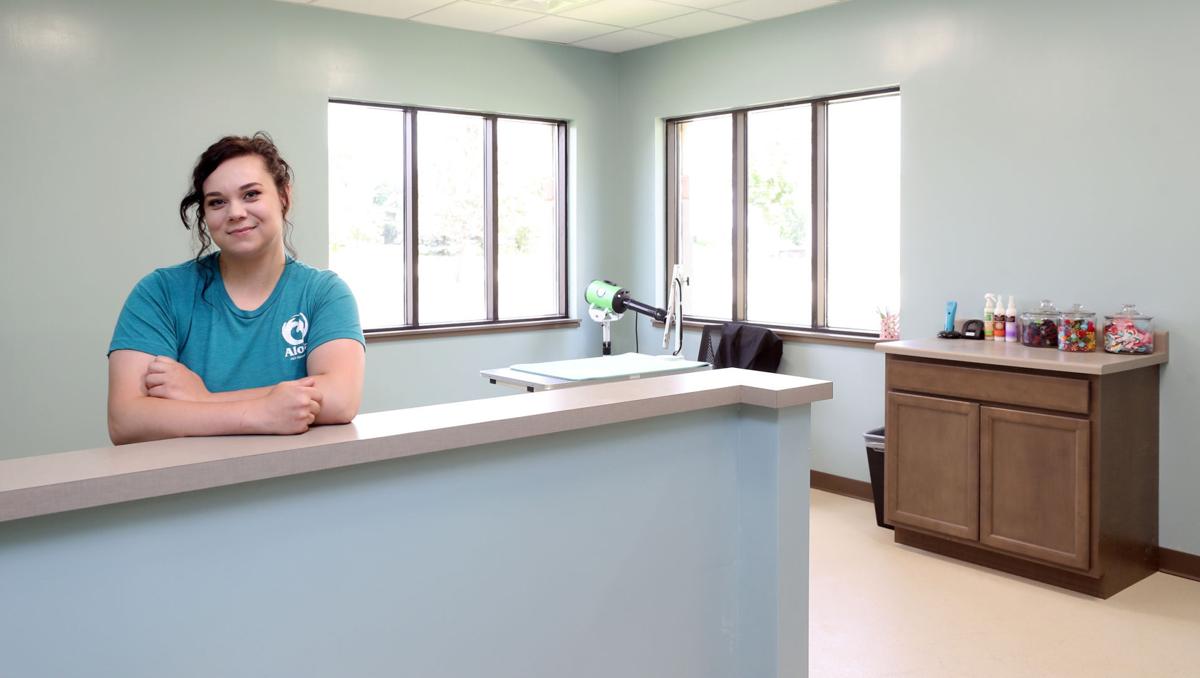 Madi Leeper is a pet stylist for Aloha Pet Resort and Spa in Cedar Falls. 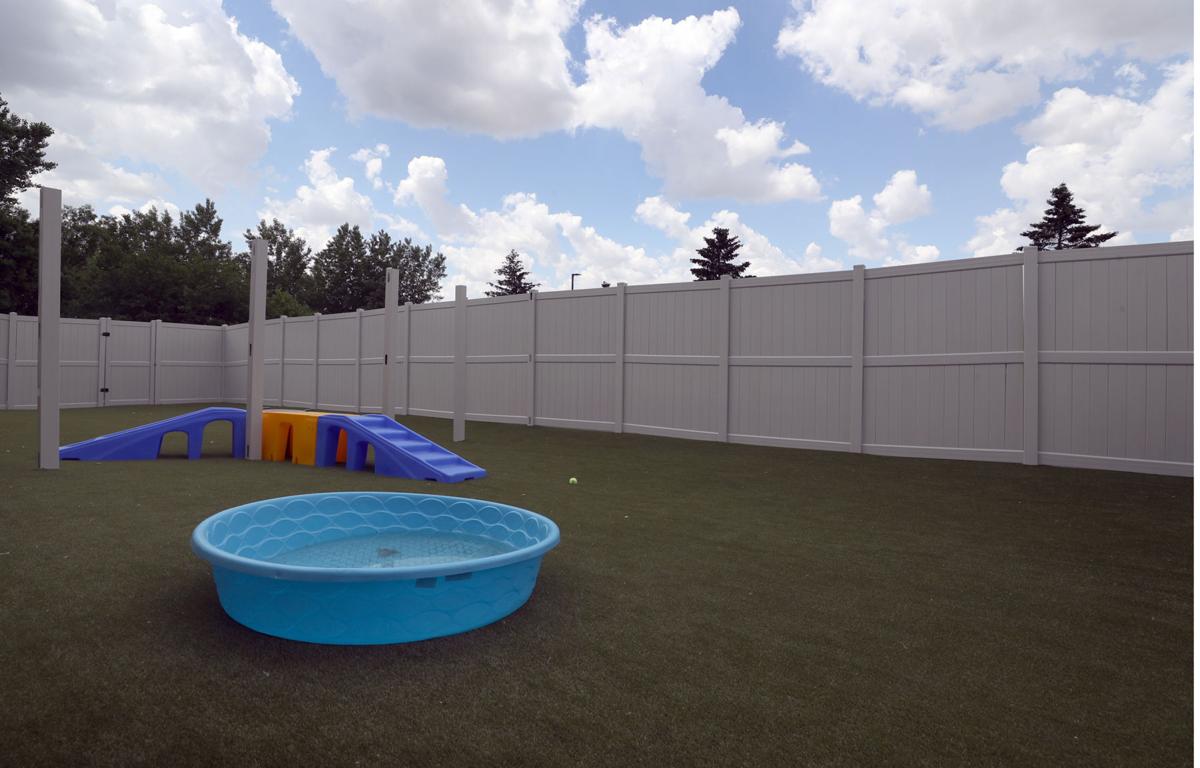 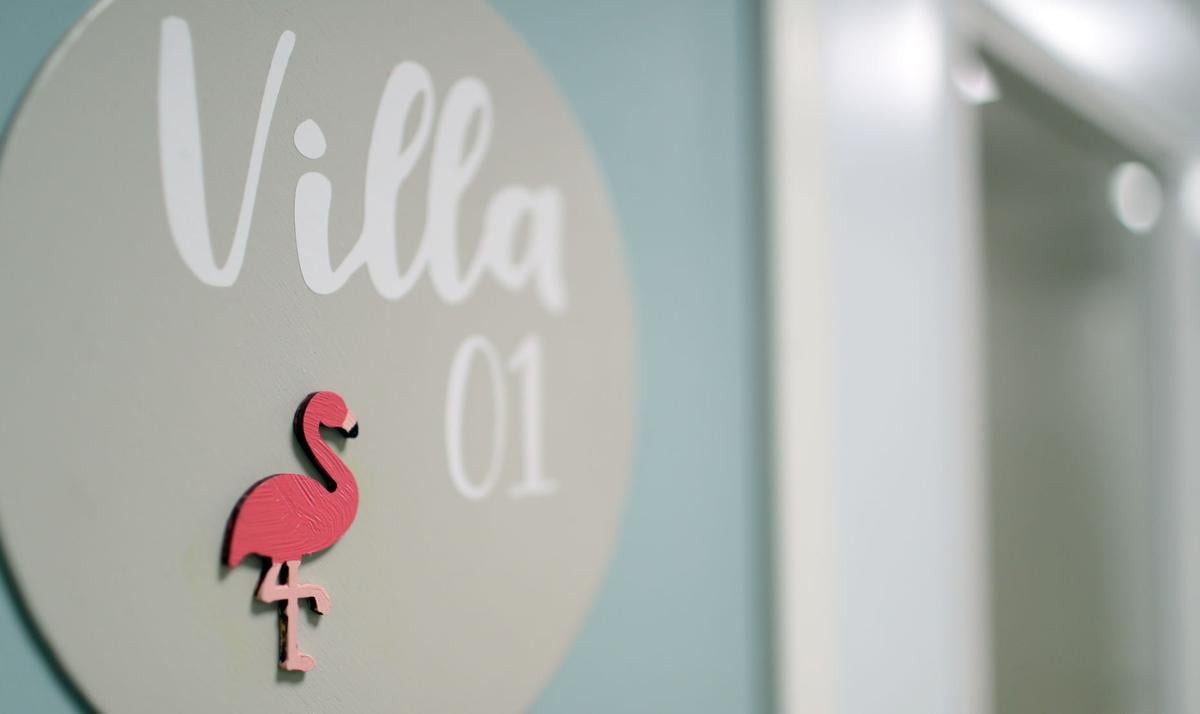 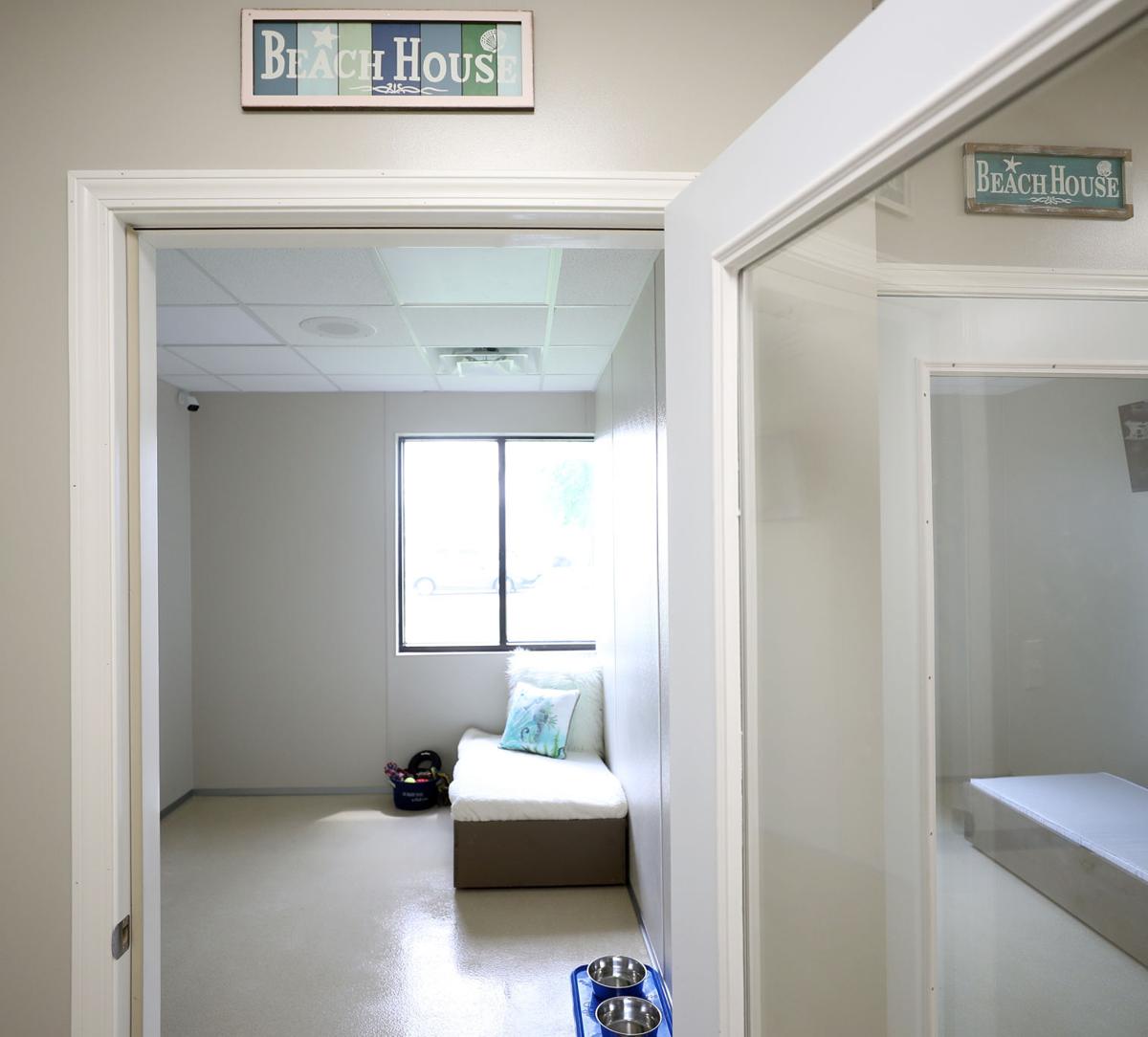 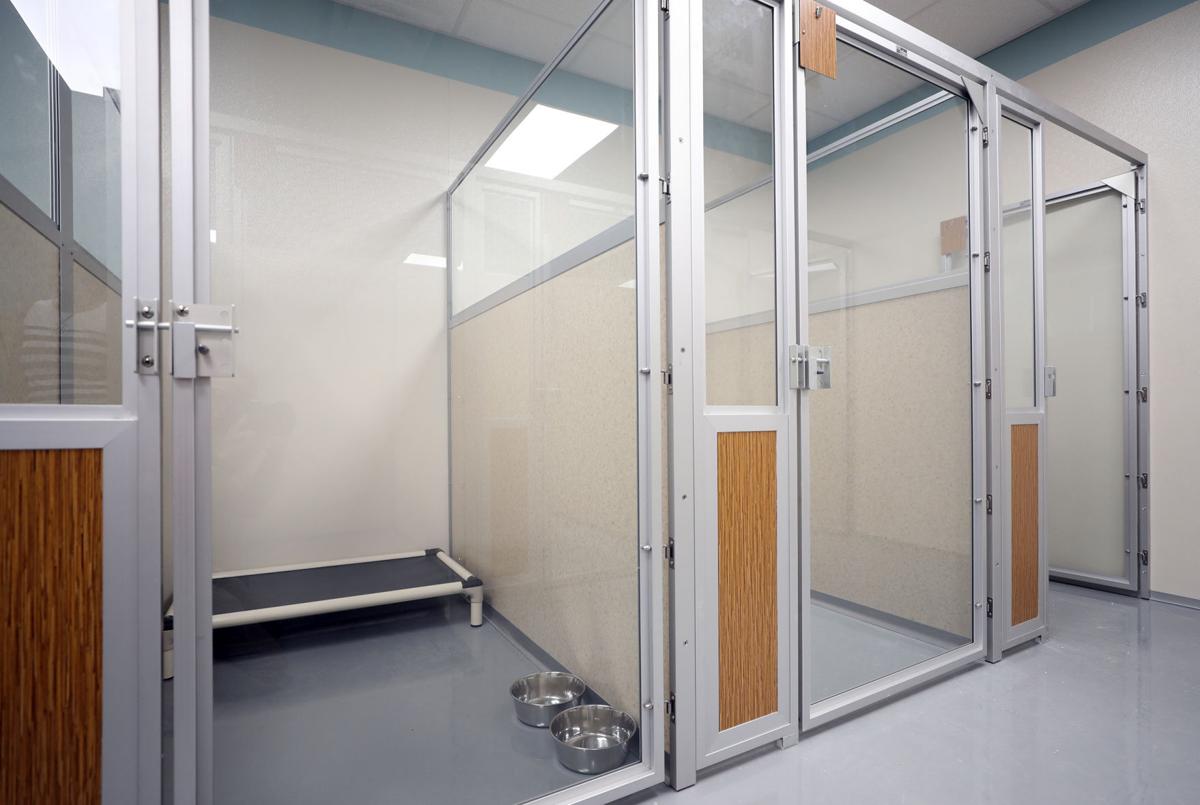 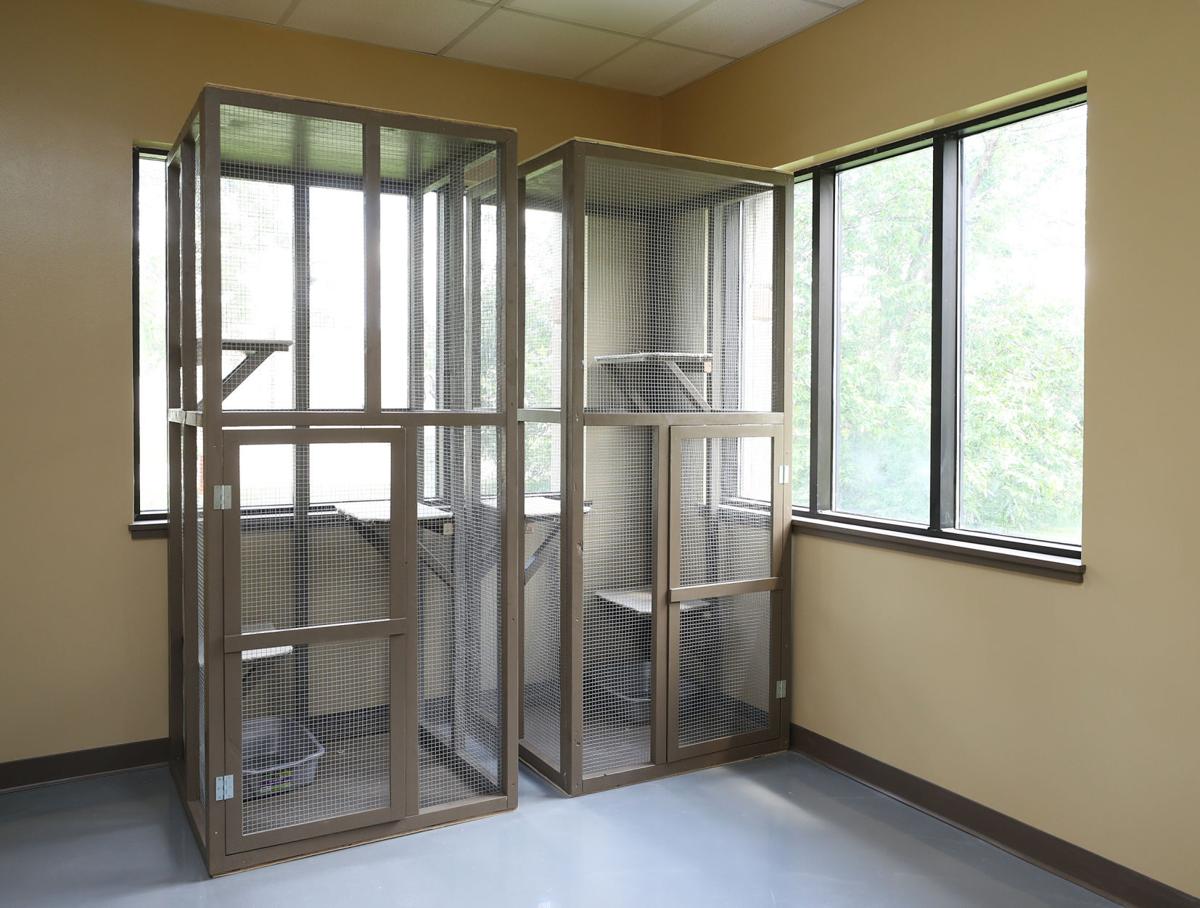 CEDAR FALLS – The Cedar Valley’s newest hotel has luxury written all over it.

With 44 suites, private villas and deluxe condos, guests are able to also take advantage of a fitness club, spa, mini bar and even dispensing medication if needed.

But the patrons will need a ride to their “staycation,” because dogs and cats can’t drive, of course.

It’s called the Aloha Pet Resort at Spa at 704 Enterprise Drive in Cedar Falls. Heather Robson, a veterinary technician of more than 20 years, will host a grand opening of her new business from 9 a.m. to noon Saturday, June 13.

“Where things have changed in two decades, it is unbelievable how people take care of their pets,” Robson said.

Robson has six employees, including a certified dog trainer, and a 12,000-square-foot space that includes an outdoor playground area with children’s toys and equipment for games and activities.

Pet owners have the choice of a standard suite, a beach house suite, a private luxury villa or a deluxe cat condo. The cat area includes windows to the outdoors where there will be squirrels and bird feeders for entertainment.

Everything is personalized at Aloha, Robson said.

“We understand that a 10-month-old golden retriever is going to have a different demand of a stay than a 14-year-old Boston terrier,” she said.

Deluxe amenities include TVs with dog channels, including a channel for dogs with anxiety.

Cameras in the room allow the owner to check in on their furry friend through an app on their phone at any time. Daily Snapchat, emails or text photos also are offered to stay connected.

“I’d want them to be treated like how my dog would be treated because we don’t have any children, so we have a house full of animals, and I want them to be able to have a positive experience,” said Madi Leeper, a groomer at the resort.

The Lani Spaw has grooming and pampering packages, including nail painting, epsom salt soak, blueberry facial and massage. The Beach Club is a special area for those recovering from injuries who need to use the indoor restroom.

Luxury spas and doggie day cares are trending across the country, Robson said.

“In a big city or a metropolitan area, this is nothing,” she said.

For more information, go to alohapetresortandspa.com.

She was born March 11, 1937, in Marshalltown, the daughter of Lester and Twylah (Engel) Keese.

She graduated from Geneseo High School and attended Iowa State University. She had her husband farmed near Elberon. She was a member of the American Legion Auxiliary.

Preceded in death by: her husband; a brother, Jack Keese; two sisters-in-law, Rose Keese and Betty Keese; and a brother-in-law, Milt Wolfgram.

Services: Private family services will be held at Kruse-Phillips Funeral Home in Tama with burial in Buckingham Cemetery in Traer.

Beverly enjoyed sewing, cross stitching, baking cookies and bars. She also enjoyed gardening and canning. Beverly liked to attend her children’s and grandchildren’s activities and sporting events and was a Minnesota Twins and Iowa Hawkeyes fan.

Memorials may be directed to Cedar Valley Hospice.

Darline retired from Sears, where she worked as a sales clerk for many years. She was a member of College Hill Lutheran Church in Cedar Falls and past president of Cedar Falls AMVETS Post #49 Auxiliary.

Preceded in death by: her parents; her husband; a son, Craig Boehmer; one great-grandson, Justin Kinkade; and two sisters, Maxine Peters and Georgia Hebrink.

Services: 10:30 a.m. Monday, June 8, at College Hill Lutheran Church, Cedar Falls, with burial in the Garden of Memories Cemetery. Visitation for an hour before services at the church.

Once word got out, Henderson said the center has received about $15,000 in donations, including monetary and essential items.

Nationally, only 54% of foster youths will graduate high school, and only 3% will graduate college, according to Michelle Cooper, a transition specialist with Black Hawk County Department of Human Services.

Heather Robson, owner of Aloha Pet Resort and Spa, stands in front of her business in Cedar Falls Thursday.

Madi Leeper is a pet stylist for Aloha Pet Resort and Spa in Cedar Falls.