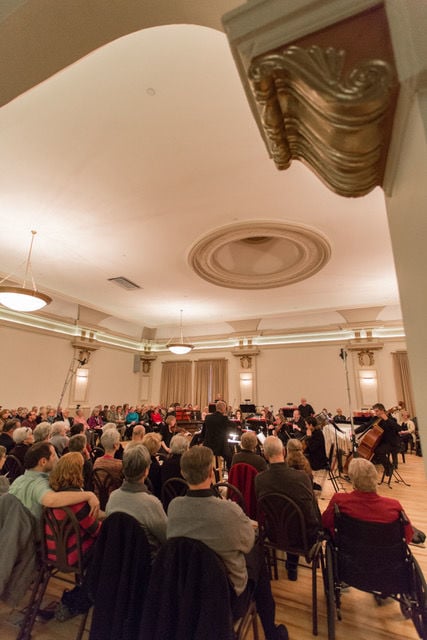 The symphony in concert at the Brown Derby Ballroom in downtown Waterloo. 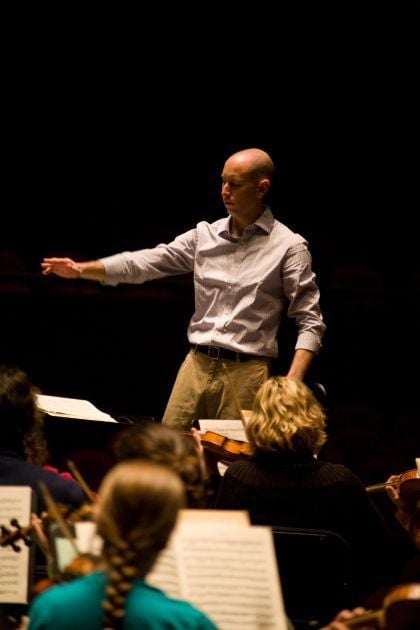 WATERLOO – German composer Felix Mendelssohn was a pop star in the early 19th century. His sister, Fanny Mendelssohn Hensel, also was a talented composer. He is one of classical music’s most recognizable composers. Fanny’s music remains relatively unknown.

On Saturday, a string orchestra from the Waterloo-Cedar Falls Symphony Orchestra will explore this “Sibling Rivalry” in concerts at 4 and 7 p.m. at the Brown Derby Ballroom, 618 Sycamore St., in downtown Waterloo.

“It’s a really cool, multi-faceted concert. On the surface, you’ve got the Mendelssohns, and it’s interesting to delve into their family history. But we’re also highlighting the work of this remarkable woman, Fanny Hensel. She was accomplished and considered during her lifetime, possibly the better composer,” said Pauline Barrett Artistic Director and Conductor Jason Weinberger.

The Brown Derby Ballroom provides an intimate setting for the concert that resembles venues where the Mendelssohns’ music would have originally been performed.

“The size is one reason why we chose the Brown Derby for these more intimate concerts years ago. This music is ideally sized to the space because it was only ever intended to be heard in a room, not a large concert hall,” Weinberger said.

The String Quartet in E-flat Major by Fanny Mendelssohn Hensel, which was composed in three months during 1834, will be performed. It was considered improper for a woman to pursue a musical career and her father forbade it. Fanny had to be content playing piano and composing for Berlin music circles, hosting house concerts and patronizing the arts with her husband, Wilhelm.

“I felt it was a wonderful pairing of string symphonies,” Weinberger explained. “These pieces were mostly likely written to be performed in private settings in homes and salons. They’re really a fascinating window onto this time and the whole culture of arts patronage.”

The siblings remained close, and Felix was devastated when Fanny died at age 41 in 1847.

Weinberger will share details of their relationship and the Romantic era of classical music with the audience during the concerts.

“Sibling Rivalry” tickets are available at the Gallagher-Bluedorn Performing Arts Center box office in Cedr Falls, through UNItix at 273-4849, or by visiting wcfsymphony.org. Tickets are $35 each. Student tickets are $10 for college students and $5 for students through age 18.

A cancer survivor's delicious and pretty Bambinos cookies are baked in her home kitchen and sold at some Hy-Vee stores. A portion of the proceeds benefits the Beyond Pink TEAM.

Major printmakers William Kentridge and Philip Chen share exhibition space for the first time in a striking new show at the  Hearst Center for the Arts in Cedar Falls.

Tea and scones, wellies, charming (and sometimes sinister) villages, BBC mysteries, pubs with names like "The Only Running Footman," brollies …

Florists ready for Valentine's Day 'war of the roses'

Local florists are prepared for Friday's Valentine's Day "war of the roses" with thousands of red roses for bouquets, and roses in other colors and lots of other flowers for sweetheart arrangements.

Editorial: ‘Parasite’ win is not absolution for Oscar

Five years after being lambasted for #OscarsSoWhite, the Academy Awards made history by awarding Best Picture to “Parasite,” the first non-English language movie to win it in 92 years.

The symphony in concert at the Brown Derby Ballroom in downtown Waterloo.