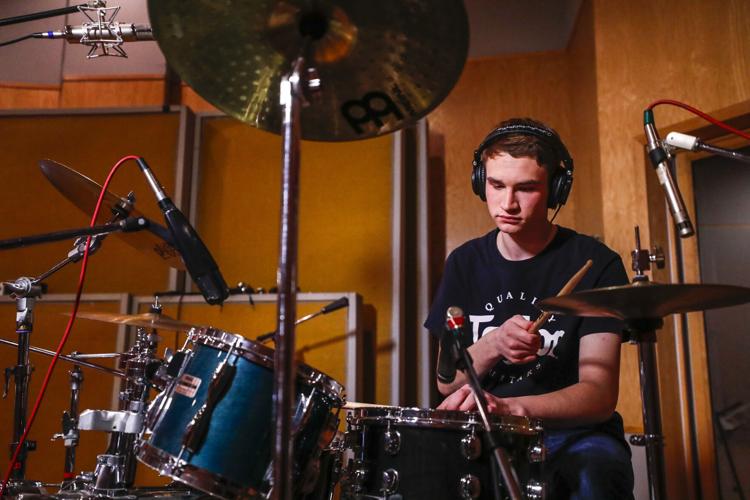 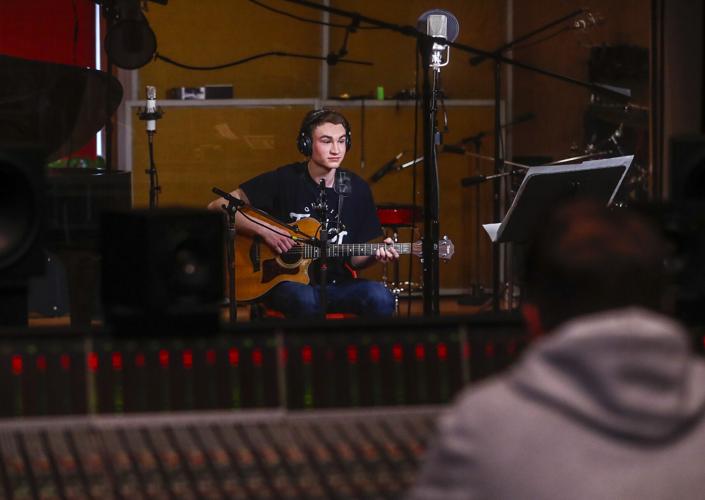 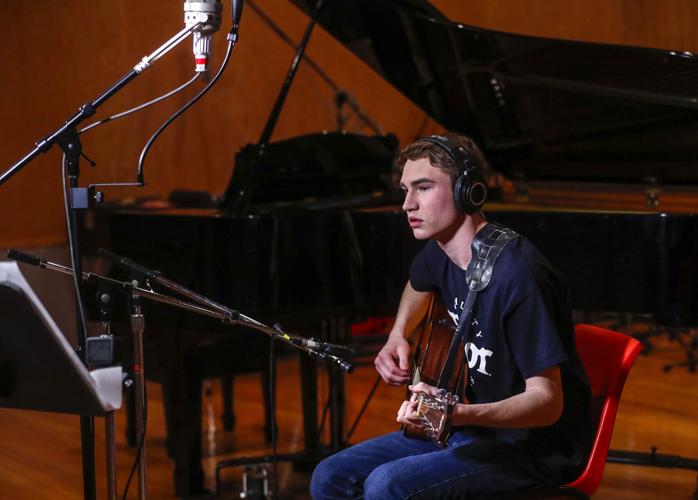 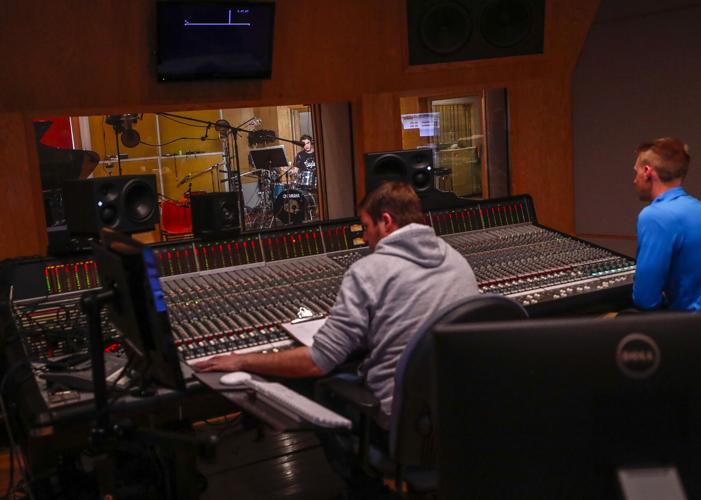 CEDAR FALLS — Carter Guse slipped into the chair, arranged his headphones and grabbed a Taylor six-string acoustic-electric guitar, settled the instrument into his lap and ran through a few chords.

“I’m flatpicking, but I can change if you want me to,” Guse said, speaking into a microphone. On the other side of the control booth glass, Catamount Studios recording engineer and producer Travis Huisman shook his head, “No, you’re good. Ready?” He flicked on a metronome sitting on the mixing console to mark time and signaled Guse.

Guse leaned forward and began playing the chords to his original song, “Alexis.” Within minutes, the 16-year-old Cedar Falls High School musician had laid down the first track on his first single.

It was the first of many tracks Guse recorded that evening at Catamount. “He contacted us and said he wanted to do something better than other recordings he’d made. That got the ball rolling pretty quickly. He’s very talented and played all the instruments,” said Huisman, including guitars, bass, keyboards, drums and piano and sang the vocals.

Throughout the hours-long recording session, Guse was focused and professional, completely in his element. “It was very cool. I played nine instruments and 11 tracks and two different parts on the guitar and two vocal tracks singing melody and harmony,” enthused Guse.

“Honestly, walking into Catamount reminded me of Paisley Park, Prince’s recording studio. Stepping into the studio, I got that experience and vibe, something I’d love to have every day. It was phenomenal – everything sounded so fantastic, and everything went amazing.

“They’re real professionals at Catamount and took my ideas and helped me create the sound I wanted for this song. I think we were very successful in what we wanted to accomplish,” he said.

“Alexis” will be released May 26 to coincide with Guse’s performance at the wcfsymphony’s pre-concert festivities. Guse will be joined by his manager and fellow musician, a member of the Midwest Music Hall of Fame, and violinist Cara Lockhard in the lobby at the Gallagher Bluedorn Performing Arts Center in Cedar Falls.

“Carter not only wrote the lyrics and music for ‘Alexis,’ but was able to record 11 total tracks and nine different instruments with most tracks completed within two takes. He did all this in under three hours. It is pretty rare to have only one or two takes per vocal or instrument,” Miller explained.

While Guse was immersed in recording, Emmy award-winning videographer Jerimiah Junkers, a friend of the family, moved around the studio with lights and camera, shooting scenes for a Guse video.

Guse is considered one of the bright rising stars on the Cedar Valley music scene. He performed a song for Jay Leno at the comedian’s March concert at GBPAC, as well as performing at Maddie Poppe’s New Year’s Eve Concert with the wcfsymphony. This spring, he already has more than a dozen gigs lined up across Iowa and Minnesota.

“Music has always been a part of my life. I was the toddler banging on my mom’s pots and pans. I got into music when I was two years old, playing guitar – not well,” Guse said, laughing.

Guse started piano lessons at age 5. He wasn’t thrilled because he really wanted to learn to play drums, “But now I’m glad I learned to play piano. Things just took off from there. I love it, and playing piano helps with writing music.”

By second grade, he was playing guitar. “I really started gigging in the fifth and sixth grade and played by first professional gig in the sixth grade. I mean, I was paid for that one,” Guse recalled.

Guse has always known he “doesn’t want to sit in the audience. I want to be front of stage,” and said music has always helped him through any difficulties or problems growing up has thrown in his path.

“Even at his age, Carter has such stage presence. That’s what I think sets him apart from other entertainers his age, and even older performers. He’s an entertainer,” Miller said.

The performer won at Bill Riley’s Talent Show and performed a song medley at Buddy Holly’s 60th Anniversary Tribute. “After that I started singing far and wide. Music is something in my life that I can’t explain. It’s never been a question of when but how,” said Guse. He describes his sound as “more acoustic, retro 1970s and 1980s.”

During the pandemic, Guse turned to YouTube and played live online.

In recent months, Guse performed at The Bluebird Café in Nashville for hundreds of patrons. The club is recognized as a songwriter’s acoustic venue where “heroes behind the hits” share their stories and perform original songs. Garth Brooks, Faith Hill and Taylor Swift are just a few of the stars who have had “career-defining moments” at the club.

Plans are to release the single for radio play, Miller said, as well as downloading. He can be found at his new website, carterguse.com, on social media @CarterGuse.

War in Ukraine: ‘Hundreds' of graves in Irpin cemetery

War in Ukraine: ‘Hundreds' of graves in Irpin cemetery