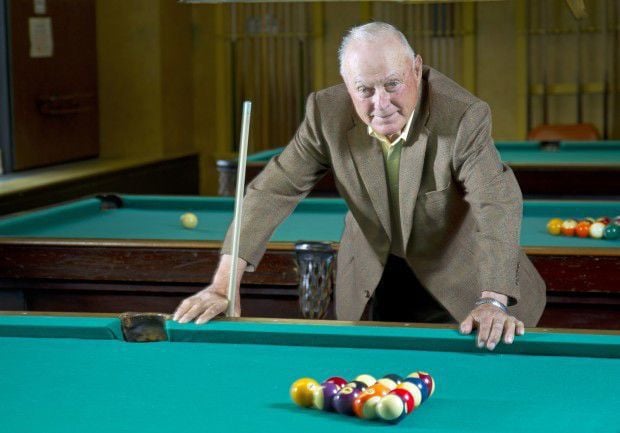 Dick Klingaman poses in 2012 at the Waterloo Elk's Club after being named an Eight Over 80 Award recipient. 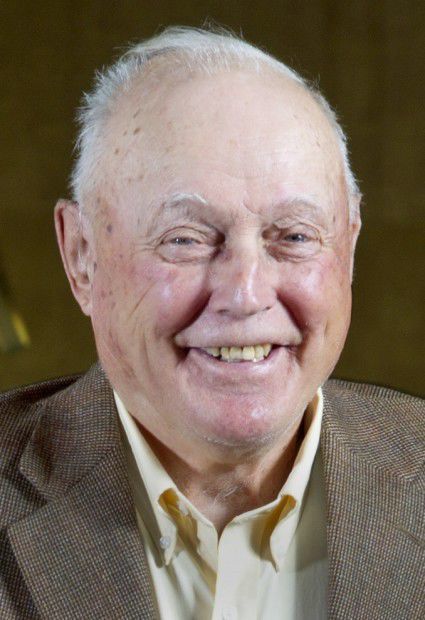 WATERLOO — Dick Klingaman’s imprint can be seen across the southern Waterloo skyline.

“The building projects he developed on the family farm were near and dear to him,” said his daughter Soo Greiman. “What was most appealing to him was being able to get on his crawler and do the dirt work for those projects.

“He did love digging in the dirt, and he willingly admitted that,” she added. “In his later years one of his favorite projects was building an earthen dike around a piece of farm ground off Highway 63 that was prone to flooding.”

“Dick was one of these guys that got up early in the morning,” Seng said. “He did a lot of work in the developments himself, and you’d see him out there at five in the morning moving dirt.”

Richard Fleming was born in Waterloo but spent his childhood in California.

He returned to Waterloo to live with his uncle and aunt, Earl and Edna Klingaman, where he helped grow crops and raise hogs and cattle, and eventually took their name.

The Orange High School graduate served in the U.S. Army during the later stages of World War II and was among the first troops to disembark at Nagasaki, Japan, shortly after the atomic bomb was dropped.

“I was 18 years old and was tough as nails,” Klingaman told the Courier in 2012 about the scene that deeply affected him. “It made me grow older real fast — so many burn victims. Everything was destroyed.”

Klingaman became a successful farmer after the war and won numerous awards for his crops and purebred hogs. But the agriculture recession sparked an interest in development, which started with the 80-home Timberline Condominiums project.

“At the time that was a very innovative concept,” Seng said. “The idea was to get people in homes for less money, and it allowed housing for people that might not be able to afford a house otherwise. But Dick was always one to come up with ideas like that.”

Klingman’s efforts led him to be named Waterloo Citizen of the Year in 1986, and he was honored as a Waterloo Courier Eight Over 80 Award winner in 2012. He was also a longtime member of the National Cattle Congress Board.

Greiman said one of the last projects Klingaman considered was a race track on part of the family farm near Hudson. While there were many supporters, Klingaman dropped the idea when others voiced opposition.

“He loved his community, and didn’t want to be known as someone who splits a community apart,” Greiman said. “He said, ‘I want too to build a community.’”

Private family services were being handled by Locke Funeral Home in Waterloo, with burial in Orange Township Cemetery. A celebration of life will be scheduled later.

He was born Oct. 28, 1949, in Coggon, son of Harold and Waneitta (Ayers) Henderson. Denny retired in 2001 from Aristech Chemicals Corp. in Pittsburgh.

Preceded in death by: his parents; and a daughter, Lisa Henderson.

Services: A celebration of his life will be held in the Lake Norman area when it is safe to socially interact, and he will be laid to rest in Independence at a date to come.

Memorials: In lieu of flowers, memorials to your favorite charity.

He enjoyed golfing, walking, listening to music, yard work, cooking and spending time with friends and family, most of all his two granddaughters.

She was born July 29, 1937, in Aredale, daughter of Wendell and Bernice (Lind) Davis. On Nov. 20, 1956, Joanne married LeRoy “Pete” Rutter in Fullerton, Calif. She worked as a bus driver for Dunkerton Community Schools for 16 years until retiring in 1984.

She was a member of the Cedar Falls AMVETS Post 49.

Preceded in death by: her parents; her husband; two brothers-in-law, Anthony Frost and Gerald Rutter; three children, Cherene, Larry and Jerry; and a nephew, Todd Frost.

Services: A private family service will be held followed by entombment at Garden of Memories in Waterloo. A celebration of life will be held at a later date. Send cards to Parrott & Wood Chapel of Memories, 965 Home Plaza, Waterloo, IA 50701, (319) 232-3235.

Memorials: to the family.

She enjoyed playing cards, karaoke, and spending time with her grandchildren and great-grandchildren.

He was born Dec. 13, 1926, in Scotland County, Mo., son of Clyde and Helen Black Tippett. Jim was a 1946 graduate of Memphis (Mo.) High School and attended the University of Missouri, receiving his bachelor’s degree in agriculture in 1950.

Preceded in death by: his parents; and his wife.

Jim was a lifelong carpenter, enjoyed fishing, the “round table” coffee group, and spending time with his grandchildren and great-grandchildren.

She was born May 1, 1926, in Keokuk, daughter of Kenneth and Helen Dorney McNally. Eleanor married Kenneth Ketcham on Aug. 1, 1949, at Immaculate Conception Catholic Church in Carthage, Ill.; he died Jan. 19, 2008.

Eleanor graduated from Carthage High School in 1944. She graduated from Marycrest College in Davenport in 1948 with a degree in teaching. Her teaching career began at Van Wert and Manly, and then continued for 40 years in the Waterloo Schools.

She was a member of St. Edward Catholic Church.

Survivors: a brother-in-law, Richard Ketcham of LaHarpe, Ill.; and several nieces and nephews.

Preceded in death by: her parents; her husband, Ken; a son, Thomas D. Ketcham in 2012; and a brother, Gerald McNally.

Services: Due to the pandemic, private family services will be held. Hagarty-Waychoff-Grarup Funeral Service on West Ridgeway is assisting the family.

She loved her family, music, playing golf and bridge. Eleanor had many friends and was active in her faith. She and her husband Ken, traveled extensively during their retirement years.

She was born July 10, 1949, in Waterloo, daughter of John Beck and Evaan (Staack) Beck. On July 27, 1968, Connie married Jan Cooper. Connie was a corporate secretary for Cooper Farms near Traer for more than 50 years.

Preceded in death by: her parents; a son, Jason; and a sister, Beverly.

Services: Visitation will be 5 to 7 p.m. today, May 6, at Overton Funeral Home, Traer (drive thru visitation where family will be available at a distance to share condolences). Service and burial will be held at Crystal Township Cemetery on Thursday, May 7, at 10:30 a.m. (Anyone except immediate family is asked to follow proper social distancing from graveside service and other attendees).

She enjoyed her family, especially time spent at the lake and making and preparing meals for holidays and special events. She had a talent for making her home warm and inviting by filling it with antiques, quilts, and family heirlooms. Connie looked forward to Sunday dinners spent with family.

SUMNER—Dorothy Louise Nuss, 98, of Sumner, died Monday, May 4, at the Hillcrest Home Sumner. Funeral services will be 10:30 a.m., Friday, May 8, at St. John Lutheran Church in Sumner.; entrance begins at 10 a.m.; burial in the church cemetery. Private family viewing will be held at Becker-Milnes Funeral Home in Sumner. Online condolences may be left at www.beckermilnesrettig.com.

Beloved wife and mother Cheryl Kay Burrows, age 62, of Melbourne, passed away on May 2, 2020, at Iowa River Hospice in Marshalltown surrounded by her family.

Cheryl was born January 23, 1958, daughter of Clarence (Beany) and Jeanette (McNamee) Burrows. She grew up in rural Butler County and graduated from New Hartford High School in 1976. In 1977 she married Dwight Rogers. They divorced. On May 25,1989, Cheryl and Steven Hosper were married. She graduated from Marshalltown Community College in 2000, majoring in computer science and graduating with honors.

Cheryl worked 35+ years in the printing industry from operating presses to programming data. Cheryl loved spending time with her family, she especially cherished any time with her grandchildren. In her free time, she enjoyed spending time cross stitching, sewing, gardening, sampling food from all over the state, attending auctions, and her faithful furry companions Paolo and Jack.

A celebration of life is to take place at a later date. Memorials can be sent to Iowa River Hospice, Marshalltown, Iowa.

Carolyn received her GED in 2002. She owned and operated her auto salvage business in Waterloo her entire life.

Services: A private family interment will be held in Garden of Memories Cemetery. A public memorial service will be held at a later date. Hagarty-Waychoff-Grarup Funeral Service on West Ridgeway is assisting the family.

Online condolences www.hagartywaychoffgrarup.com. Cards may be sent to the funeral home to be given to the family.

He was born Feb. 21, 1948, in Grundy Center, son of Erwin and Katherine (Groenwald) Ash. Butch graduated from Grundy Center High School in 1967. He served in the U.S. Army during the Vietnam War, stationed with the First Division, “The Big Red One.” He married Elizabeth Ann Buck on July 28, 1972, at Sacred Heart Church in Grundy Center.

Edwin worked for Viking Pump in the foundry for more than 40 years, retiring in 2010.

Preceded in death by: his parents; a sister, Jeane Becker; his mother-in-law, Marjorie Buck; and father-in-law, Paul Buck.

Services: A private burial will be held at a later date. Abels Funeral and Cremation Service, Engelkes-Chapel is assisting the family.

Memorials: to the family to be donated to a cause at a later date.

Butch was an avid bookworm. While he hunted deer and pheasant in his younger years, he eventually transitioned to just hunting deer. Edwin loved his time on the farm and especially his garden. Butch’s favorite time was spent with his family, including his grandchildren who would visit during the summer.

She was born July 21, 1929, in Warren Township, Bremer County, daughter of Fred and Clara (Kueker) Heine. She graduated from Tripoli High School in 1947. She worked at Rath Packing and married Wayne Lynch on Aug. 21, 1949, at St. Paul’s Lutheran Church. They moved to Grundy County to farm and she helped Wayne with his accounting business. Wayne died in 1989.

She was a member of American Lutheran Church in Grundy Center.

Services: A private visitation and service will be held at Abels Funeral & Cremation Service-Engelkes Chapel in Grundy Center; private burial at Rosehill Cemetery in Grundy Center.

Memorials: to the family.

She was as a strong, hardworking, generous, and caring person. She loved spending time with her family, especially her grandchildren and eventually, her great-grandchildren. She enjoyed many trips with family as well as their family Christmas Eve tradition.

A sampling of submitted materials may be featured on the society’s social media platforms.

Dick Klingaman poses in 2012 at the Waterloo Elk's Club after being named an Eight Over 80 Award recipient.