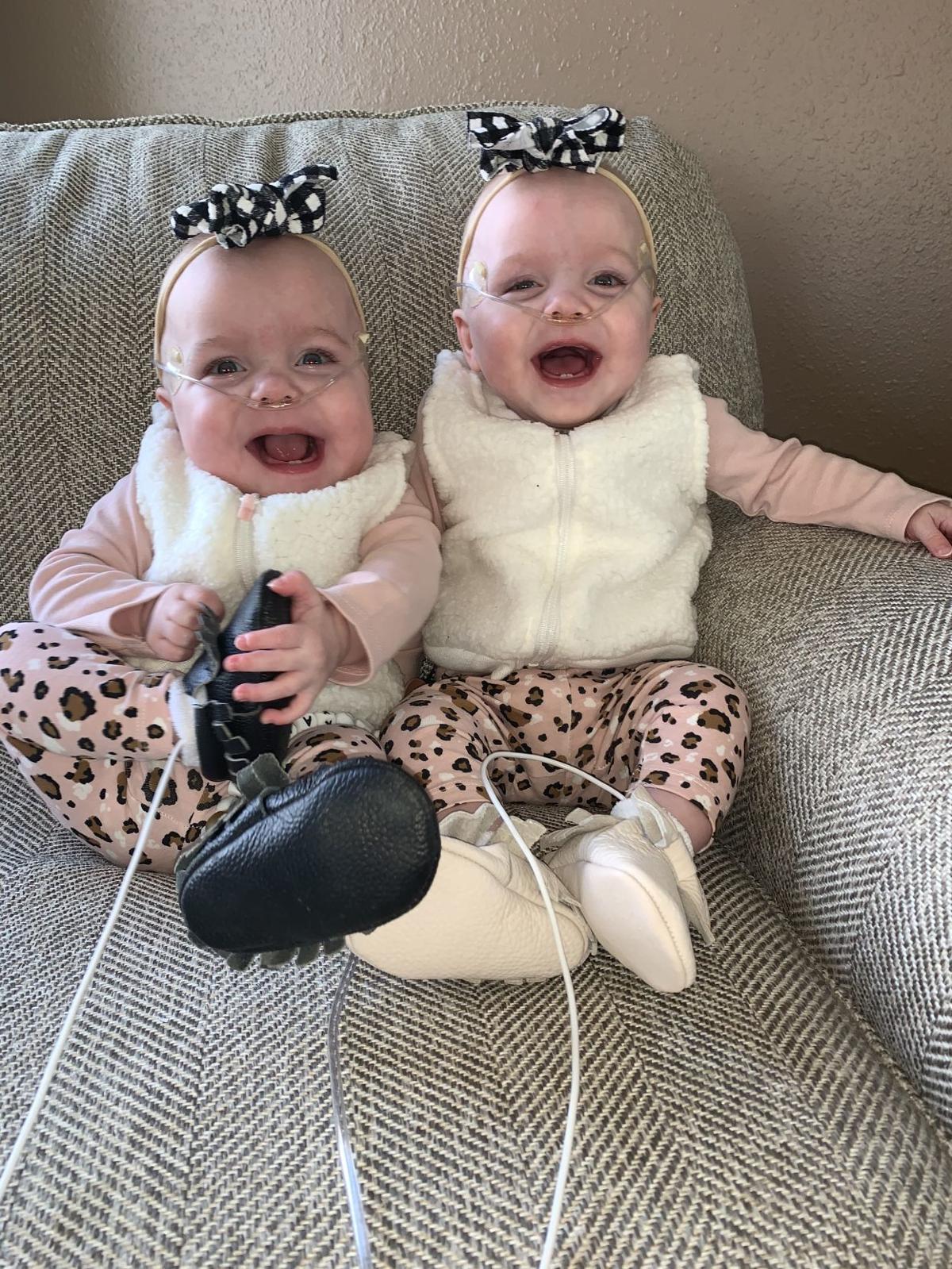 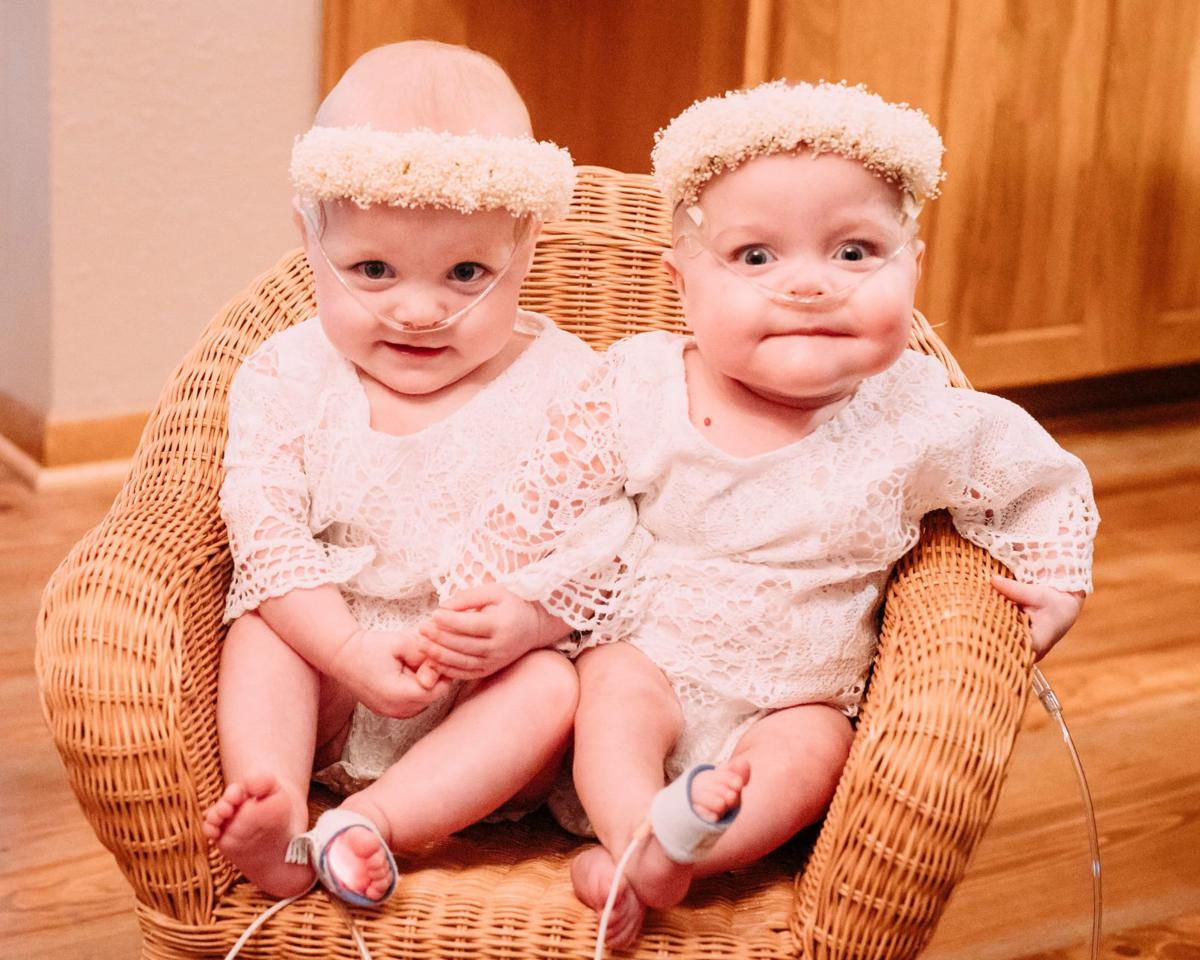 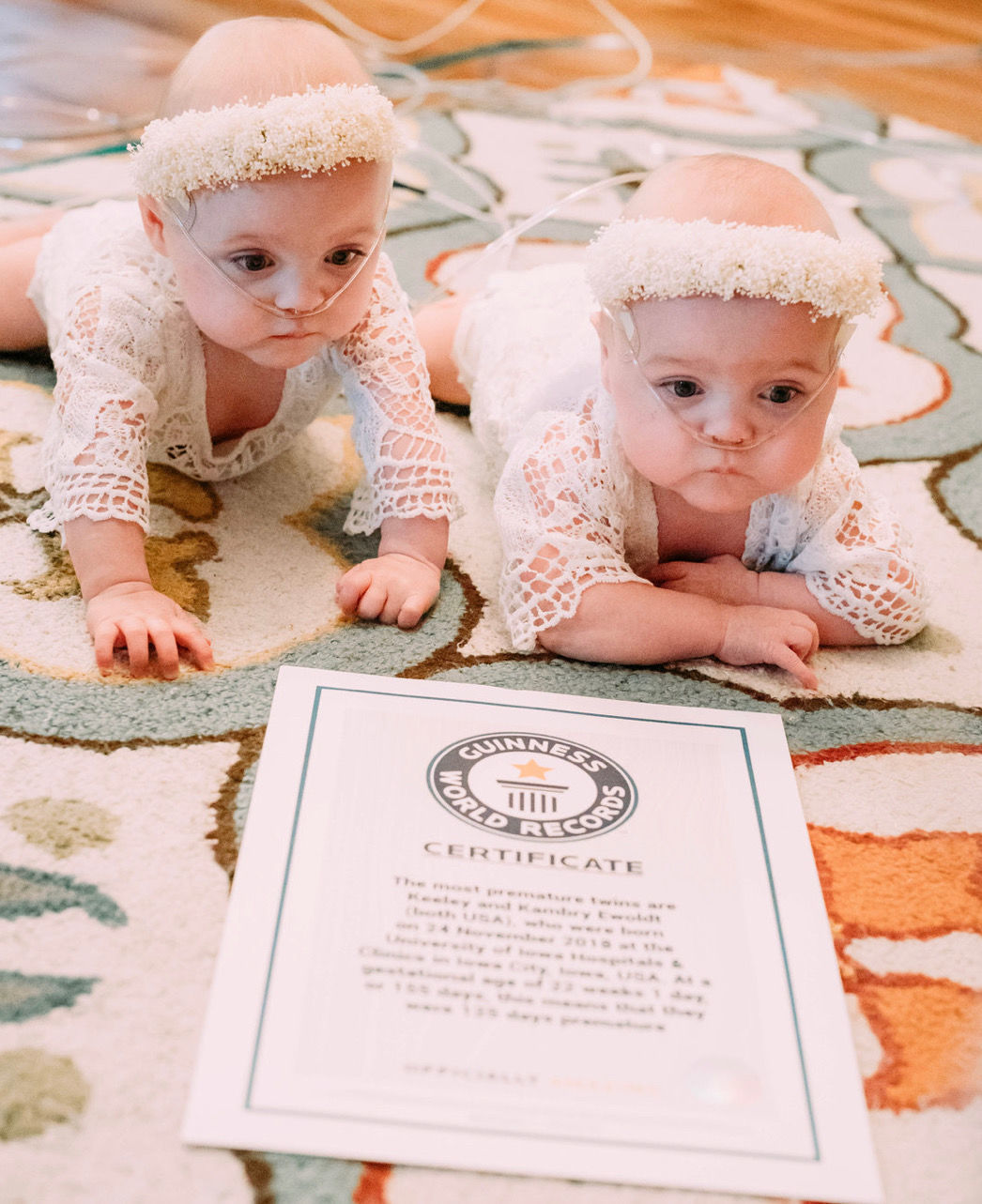 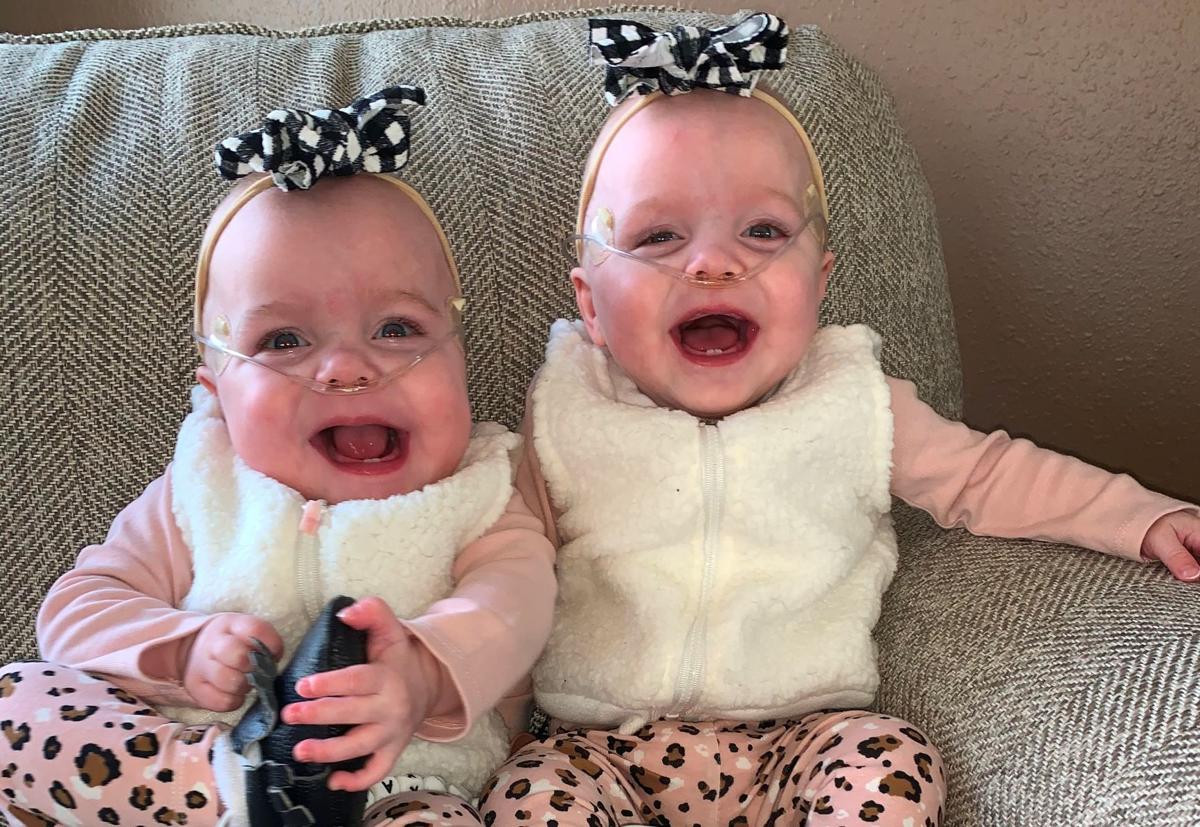 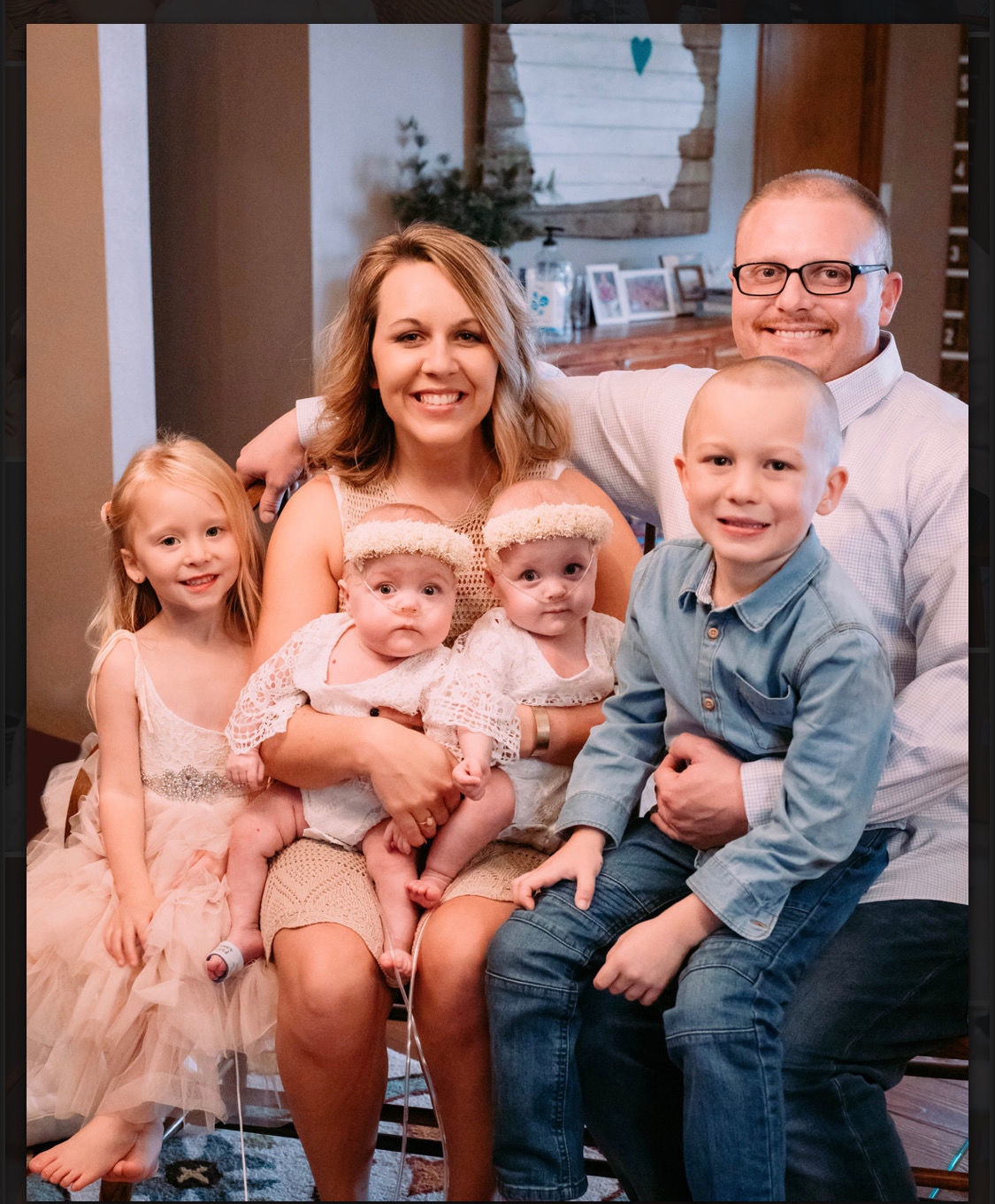 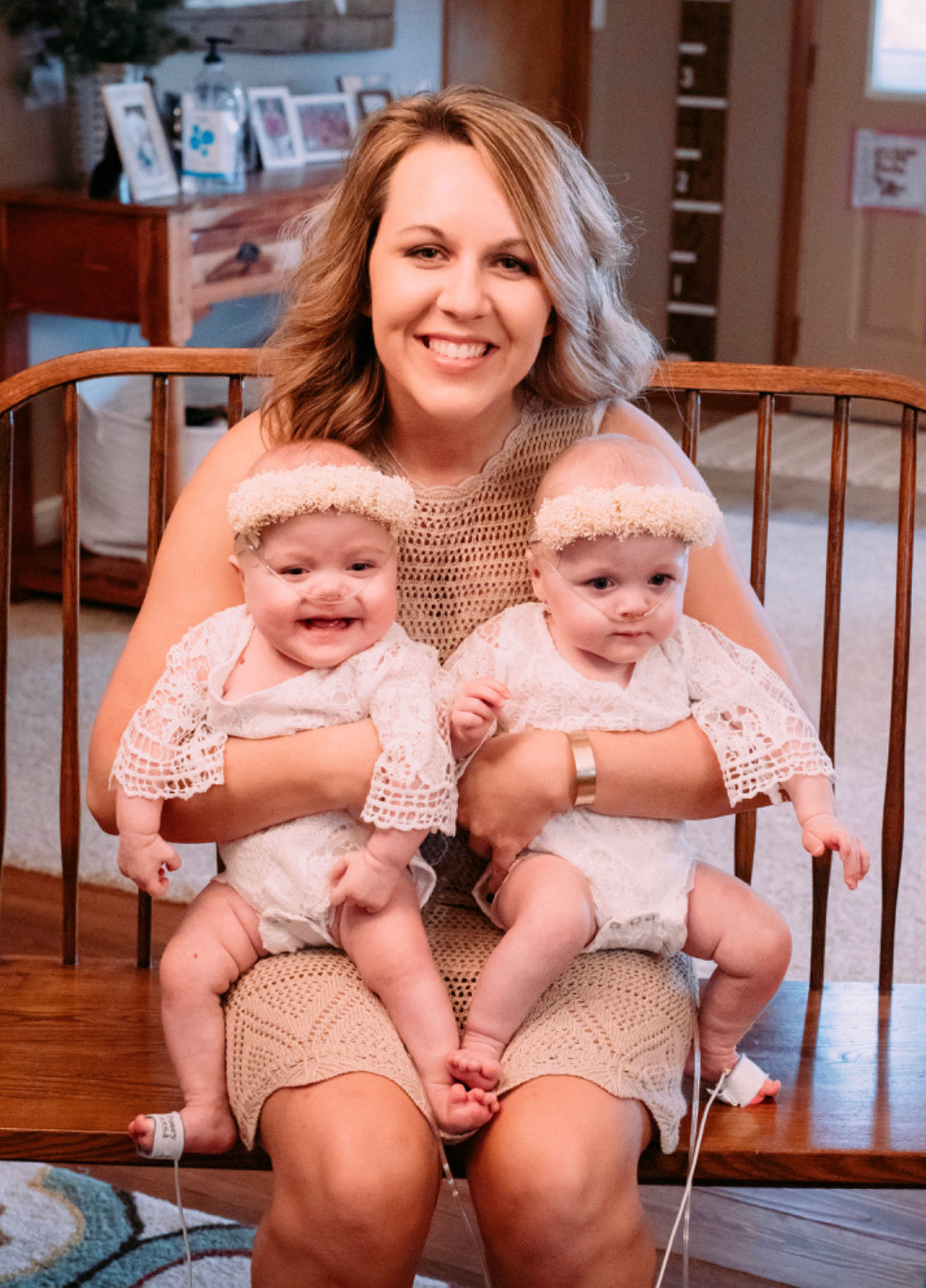 “From the day they were born they were strong,” said mother Jade Ewoldt.

The Ewoldt family will quietly mark the girls’ birthday Sunday, with plans for a larger gathering in May when the risk of contracting respiratory viruses wanes. Delaying a big celebration will protect the girls’ still-fragile lungs and immune systems, Jade said.

“We take a lot of precautions. A common cold can still kill them,” she said.

Keeley James and Kambry Lee were born on Nov. 24, 2018, delivered at just 22 weeks and one day gestation. A full-term pregnancy is 40 weeks.

At birth, Keeley weighed 1 pound and Kambry weighed 13.4 ounces. Each baby was about the length of a dollar bill. Kambry lost weight soon after birth, reaching a low of 11.64 ounces — less than a can of soda. Their fragile skin could tear at the most gentle touch. Their eyelids had not yet formed. They were at risk for heart problems, bleeding in the brain and countless other complications. Miraculously, they developed none of them.

“From birth we were told they could have all these problems, and they haven’t,” Jade said. “They continue to surpass and avoid all the things that could have gone wrong. Their resilience has not surprised me. They are just kicking butt.”

The twins spent five months in the Iowa City neonatal intensive care unit and were discharged about a month after their original March 29 due date. In October, Guinness World Records named them the World’s Most Premature Twins, breaking a 20-year-old record.

Today, Keeley weighs in at 14.7 pounds, and Kambry is 14.4 pounds. They smile. They laugh. They wiggle. Their appetites are healthy, and they’ve begun experimenting with solid baby foods, “just for the flavor. Keeley loves peaches and Kambry seems to really like yogurt, but isn’t sure about green beans,” Jade said, laughing. “It’s fun to see them explore the food.”

It will be a while before they’re given more than a few bites per day.

“They still take mostly bottles,” Jade said. “Most people think that with the girls at a year old they should eat more solids, but for them, their brains aren’t developed enough to swallow, and because they’re on oxygen they can aspirate,” the food.

At the girls’ last medical checkup a few weeks ago, doctors said they are developmentally about 5 months old. Like other babies that age, they’ve begun exploring their surroundings. Keeley can sit up unassisted for short periods of time and both girls are becoming more mobile.

“When we first came home I couldn’t even think about how to get through the days. Now, I’m figuring out how to keep up with them moving around. They scoot and grab and get into their (older) brother and sister’s toys,” Jade said.

The twins’ continued progress depends on minimizing risks. The Ewoldts take drastic measures to protect the girls from infections. The twins leave the house for doctor visits and occasional, brief outings. Few visitors are allowed in their home. Those who do come must be vaccinated and free of even the slightest sniffle. Respiratory syncytial virus is especially dangerous for the girls.

“RSV season is a big hurdle,” Jade said. “We can’t expect everyone to take all the precautions they need so we make sure we’re minimizing exposure.”

The family decided older siblings Koy, 6, and Kollins, 3, would be homeschooled this year so as not to bring home germs and viruses that tend to make the rounds in kindergarten and preschool classrooms.

“We have been blessed by God to have an amazing woman from our community who volunteers to help with homeschooling Koy. She helps us two to three times per week. It’s amazing. I can’t even thank her enough,” Jade said.

Koy and Kollins get time to play outside, changing clothes and showering when they come inside to help protect their baby sisters from allergens and bacteria. Wesley, a pattern maker with Woodland Pattern in Waterloo, takes the same measures each day after work.

A pediatric nurse visits their home once a week for a few hours to allow Jade and Wesley time to run errands or simply get out of the house.

“We each struggle with this,” Jade said. “We have to get out and do things for our mental health. Isolation isn’t what anyone wants, and we do have some bad days. It can be hard to explain why we can’t go outside and play.”

Even with precautions, the twins have had setbacks. Each has been hospitalized more than once with respiratory illness. And each time, the family’s support system jumps in to help navigate their complex — but rewarding — life.

“We have so many unsung heroes. Without our tribe and all of these people who love and support us, we’d struggle so much harder,” Jade said.

It's official: Tiny twin girls from Dysart have broken a Guinness world record.

Tiny twin girls from Dysart are beating the odds and making history.

Tuberculosis, a bacterial infection commonly thought to be an illness of the past, has been detected at a school in Franklin County.

A Cedar Falls native, her boyfriend and their dog have embarked on a journey they've dreamed of for years -- biking from Deadhorse, Alaska, to the southernmost tip of Argentina.

MercyOne has announced its list of the most popular baby names in 2019.