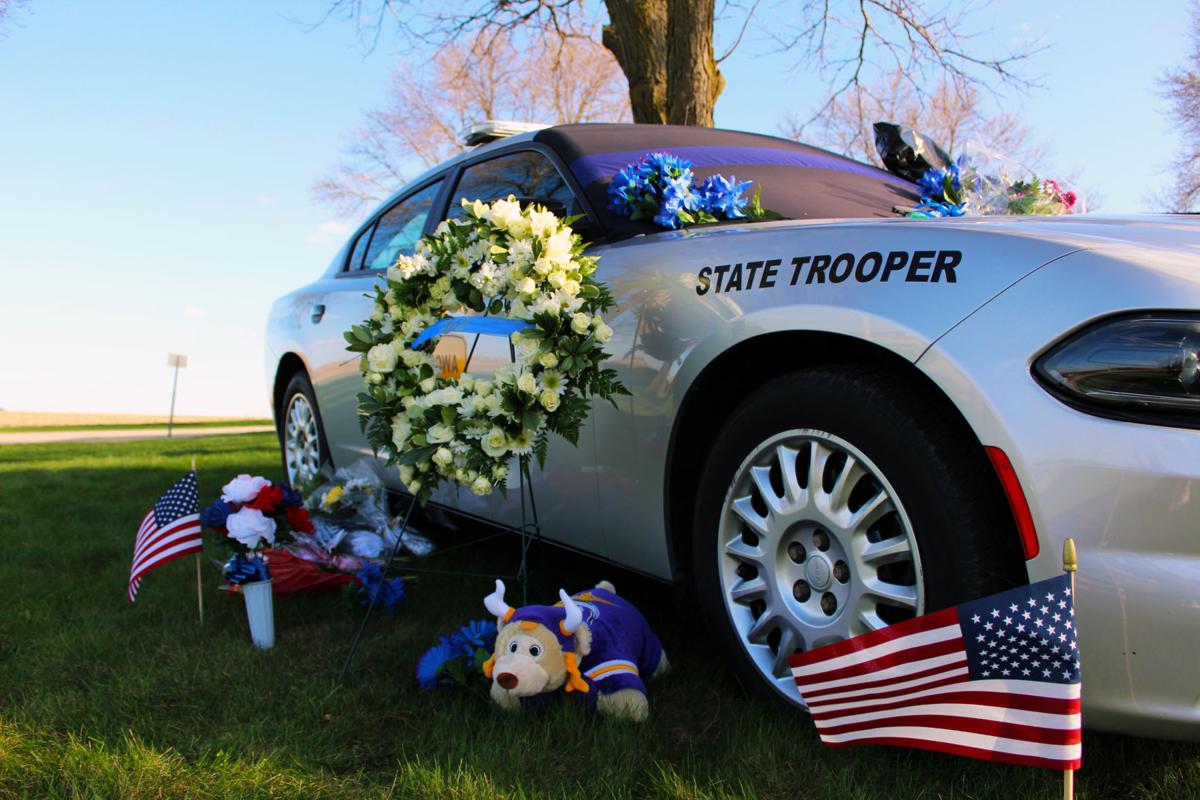 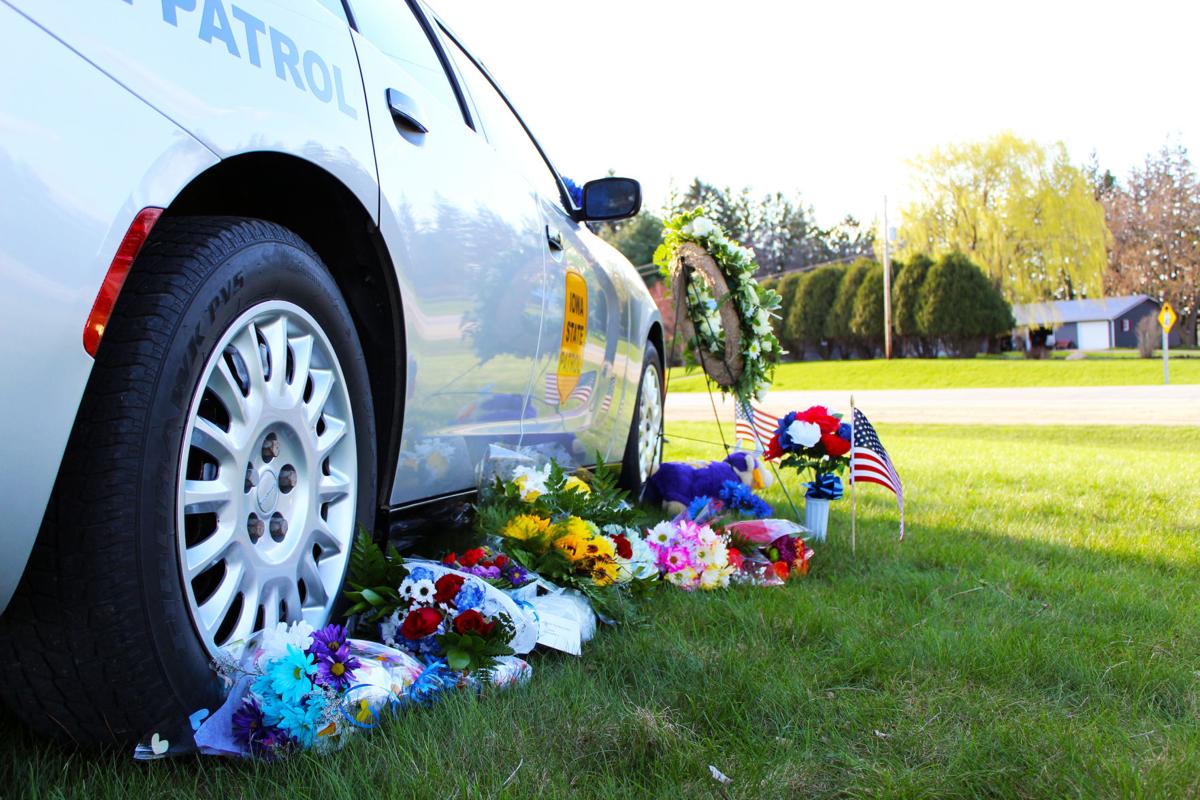 Flowers line the side of Sgt. Jim Smith's former patrol vehicle. Smith was killed Friday in Grundy Center. A memorial of his patrol car was displayed Monday in front of the District 10 Iowa State Patrol office, 15239 35th St. in Oelwein.

INDEPENDENCE -- Public funeral services have been set for slain Iowa State Patrol officer Sgt. Jim Smith who was shot and killed on April 9 while attempting to arrest a barricaded subject in Grundy Center.

Iowans statewide share the Iowa State Patrol's grief in the loss of Sergeant Jim Smith. The State Patrol and the family of Sgt. Smith have announced the following schedule of public funeral services.

Visitation will be from 3 to 8 p.m. Thursday at Reiff Family Center-Funeral Home and Crematory, 216 Third Avenue SE, Independence.

Masks are required at the visitation and funeral service.

"He really enjoyed the law," a colleague said. "That’s what drove him — he was good in his personal life and good at work."

A state trooper was killed in Grundy Center on Friday night, and the suspect police say shot him is in critical condition at the hospital with multiple gunshot wounds.

GRUNDY CENTER — The facts of the case, according to the criminal complaint: Michael Thomas Lang, 41, shot and killed Iowa State Patrol Sgt. Ji…

"He lived his faith, he did not just speak it," a friend said of Smith. "He was not embarrassed of who he was."

A final 10-42 -- police code for "end of watch" -- was played before Smith's casket was taken out, with a dispatcher choking up while repeatedly calling Smith's call number, 462.

"He was just terrorizing us." Suspect was cited for trespassing days before trooper's death

The candidate for sheriff in rural Iowa had an unusual background: a record of alcohol-related crimes that landed him in the same county jail he would run if elected.

Flowers line the side of Sgt. Jim Smith's former patrol vehicle. Smith was killed Friday in Grundy Center. A memorial of his patrol car was displayed Monday in front of the District 10 Iowa State Patrol office, 15239 35th St. in Oelwein. 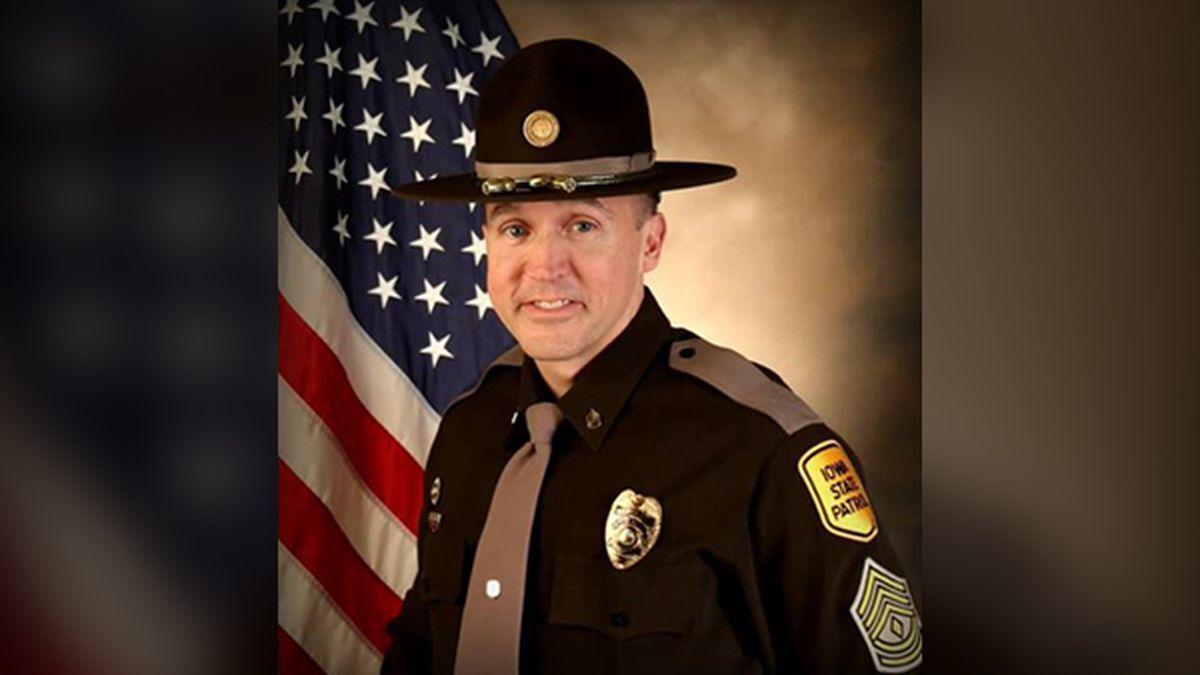