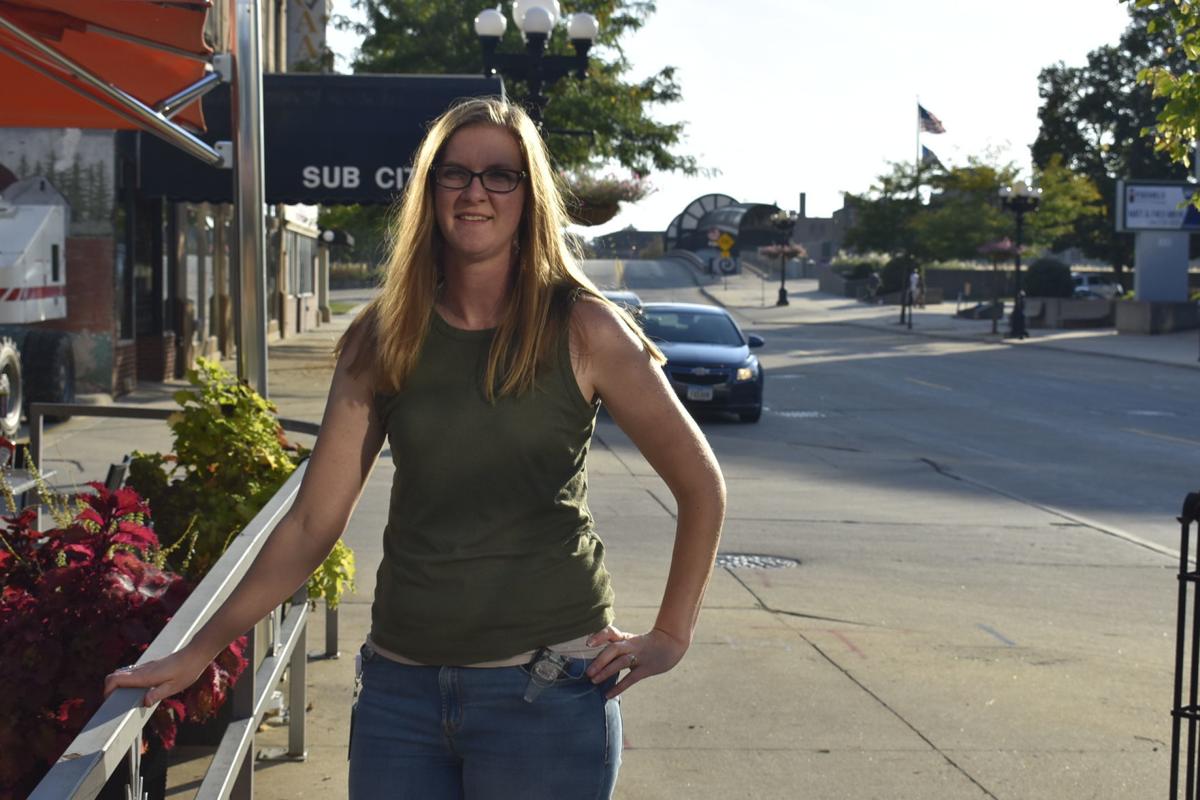 Tessa McKenna has started getting insulin from Canada because of the high cost of the drug in the states. 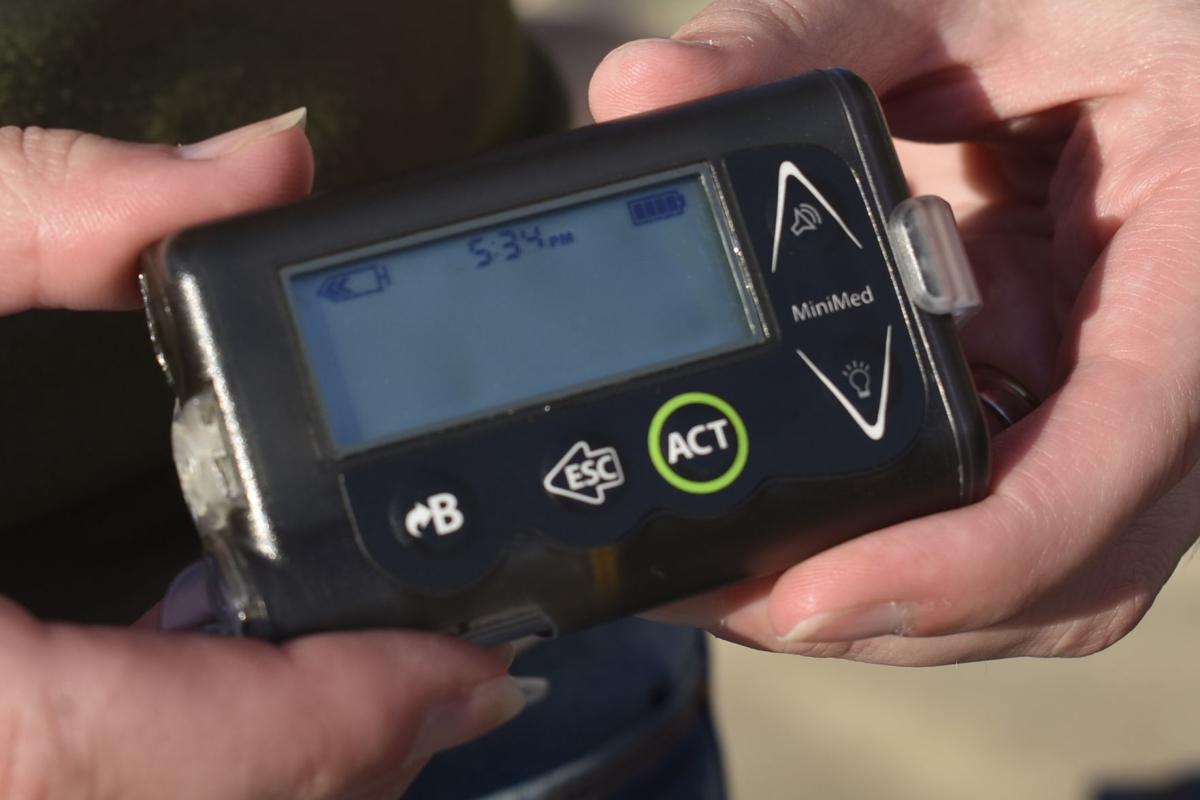 Tessa McKenna's insulin pump, which she'll soon need to replace and can cost more than $5,000.

WATERLOO — Tessa McKenna can’t afford the $5,000 out-of-pocket deductible for the insulin that keeps her alive.

“It’s really expensive. ... The insurance that I’m on now is a high-deductible. It’s $5,000 for individual and $6,000 for family. Usually pharmacies want you to buy a three-month supply at a time,” she said.

So McKenna, who has Type 1 diabetes, orders insulin from Canada. It costs the 39-year-old Raymond resident $1,916 a year for approximately 36 vials of Canadian insulin, less than 20% of what she’d pay through her insurance company. McKenna has insurance through her employer, Strategic Imaging.

Over the past decade, pharmaceutical companies have raised the cost of insulin by more than 500%, leaving McKenna and others like her looking for ways to afford the lifesaving medication.

Rep. Timi Brown-Powers, D-Waterloo, works as a nurse. Many of her patients with diabetes face difficulty in affording their insulin. Some have to choose between buying insulin or paying bills.

“Insulin has been around for a long time, and the prices have not gone down at all. It’s a medication that we all know can mean life or death for many patients,” Brown-Powers said.

According to the Mayo Clinic, Type 1, or insulin-dependent diabetes, is a chronic condition in which the pancreas produces little or no insulin. Treatment focuses on managing blood sugar levels with insulin, diet and lifestyle. There is no cure.

Complications can include damage to blood vessels and organs, blindness, increased risk of heart disease and death.

In 2015, 30.3 million Americans had diabetes, according to the American Diabetes Association. That is 9.4% of the population. More than 9,500 Black Hawk County residents had diabetes in 2015, according to Countyhealthratings.org.

McKenna, who has no family history of diabetes, was diagnosed at 18 years old. “It came out of left field for me because I had no signs or symptoms of it,” she said. “It was really devastating. It’s such a huge life change.”

“It’s so much cheaper there because of their particular health care system,” she said.

Less than two weeks after sending her prescription to a Canadian pharmacy, nine vials of insulin were delivered to McKenna’s home at a cost of $479. That amount isn’t applied toward her insurance deductible because the insulin is obtained outside of her insurance’s network.

“I know we’ve had some people who have gone (to Canada) once or twice,” Bailey said. “There are a fair number of Iowans who go to Canada or receive insulin from Canada.”

Caravans to Canada have become commonplace for diabetic Americans seeking affordable insulin. Democratic presidential candidate and Vermont Sen. Bernie Sanders traveled to Canada in July with a group of diabetics to get cheaper insulin. Sanders has long been critical of the rising cost of prescription drugs — a key issue of his campaign.

That anyone has to struggle at all to pay for insulin is precisely what its discoverers nearly 100 years ago hoped to avoid.

Insulin was discovered in 1921 by Canadian Dr. Frederick Banting, who along with his assistant, Dr. Charles Best, was awarded a Nobel Prize for the discovery, according to John Hopkins Medicine. The two sold the patent in 1923 for $1 to ensure the lifesaving drug was accessible to all who needed it.

The skyrocketing cost of insulin contradicts that gesture, and some lawmakers want to know why.

Early this year, U.S. Sen. Chuck Grassley, R-Iowa, started a Senate investigation into rising insulin costs and sent letters to drug makers and the Centers for Medicare and Medicaid Services.

“The American Diabetes Association has estimated that 1.5 million people will receive new diagnoses each year. For some with diabetes, particularly Type 1, patients require daily insulin injections or an insulin pump to manage blood sugar levels. However, even though insulin has been used to treat diabetes for almost 100 years, its price has continued to increase, putting stress on patients and taxpayers,” wrote Grassley, along with U.S. Sen. Ron Wyden D-Oregon, on behalf of the U.S. Senate Finance Committee.

The senators wrote to insulin manufacturers Eli Lilly, Novo Nordisk and Sanofi “seeking information regarding recent price increases of up to 500% or more for insulin, a hormone used to treat diabetes that has been on the market for nearly one hundred years,” according a February news release from Grassley.

Finding a solution to make insulin affordable is personal to Iowa’s U.S. Sen. Joni Ernst. Two of her siblings have Type 1 diabetes.

“My sister and my brother have been insulin-dependent most of their childhood and all of their adult lives, so I understand the direct impact of the cost of insulin and the challenges that we have in making sure we keep them healthy,” Ernst said.

She’s been involved with a number of bills that aim to lower prescription drug prices. One such bill, the CREATES Act, would “prevent brand-name pharmaceutical and biological companies from stifling competition,” Ernst said. “It really is a wonderful piece of legislation.”

Unfortunately, federal lawmakers haven’t given the bills much attention.

“What we have to do now is get them voted on the full Senate floor, so that will be the next step in the process. The challenge is to get them through the House (of Representatives).”

Ernst said she’ll continue to push for that legislation.

“Because of my ties to people with pre-existing conditions, especially in this case my brother and my sister, we want to make sure that they have access not only to affordable insurance options for them but that they can actually afford the medications needed to prolong their lives. ... It’s really important that we all pull together and get these bills across the finish line,” she said.

There are programs to help patients with the cost of their insulin, said Mary Vesely, Peoples Community Health Clinic certified health coach. The nonprofit clinic provides access to affordable care regardless income or insurance status.

“The patients we see rarely, or should rarely, have trouble accessing insulin. There are so many programs through our pharmacy and the local community that our patients can use to get insulin at a very reasonable cost — even those with no insurance or high co-pays,” she said in a statement to The Courier. “There are also multiple programs through drug companies that help those with private insurance and high co-pays get insulin at a very low cost.”

But often diabetics aren’t aware of programs to help keep the cost lower, Vesely said. “Sometimes we may need to have the doctor switch to a different insulin than a patient was using due to better pricing, but that can easily be done.”

As a Cedar Valley legislator, Brown-Powers wants to do more.

She introduced a bill to the Iowa House during the 2019 legislative session that would have allowed people with diabetes a free 30-day refill if they couldn’t afford insulin. The House passed the bill, but it was amended in the Iowa Senate to force pharmaceutical companies pay for the refill. The amended bill was returned to the House but wasn’t brought to the floor for a vote and died.

“It would not have done near what we need to do,” Brown-Powers said. “... There is a need for an emergency refill, but the need is to lower the price.”

According to the United Health Foundation about 10% of Iowans have diabetes.

That number goes up to 22% for Iowans over 65, according to the Iowa Department of Public Health. In 2017 231,984 Iowans had diabetes and in Iowa diabetes is the seventh leading cause of death.

WATERLOO — For five years the Cedar Valley Focus on Diabetes organization has pushed to bring awareness to diabetes through screening and education.

For five year the Waterloo has hosted the annual Cedar Valley Focus on Diabetes to bring awareness to diabetes.

The Splash of Color Walk is Oct. 12 at Sullivan Park. Registration for the event begins at 8 a.m. The walk is meant to raise awareness of breast cancer in African-American women.

The conversation on stage largely was about labor issues facing American workers and unions.

Democratic presidential candidate and former Maryland Rep. John Delaney will go on a four-day tour of Iowa to visit six cities, including Waverly.

Three area companies --  ACES, IFC Studios, and Sidecar Coffee --- have put their creative minds together in an effort to help House of Hope and the Youth Art Team.

Presidential candidate and former Maryland Rep. John Delaney wants Iowans to have a voice in 2020.

This is the first time the state agency, which oversees Iowa’s Medicaid program, has issued a withhold on a capitation payment to any managed-care organization.

Tessa McKenna has started getting insulin from Canada because of the high cost of the drug in the states.

Tessa McKenna's insulin pump, which she'll soon need to replace and can cost more than $5,000.