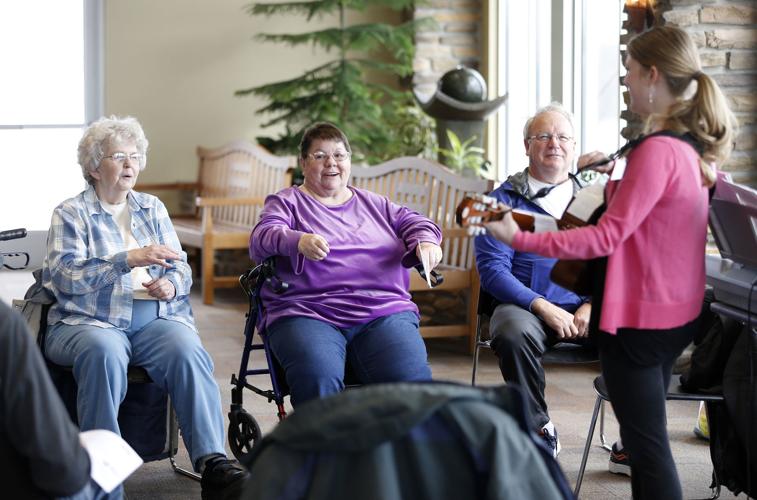 L-R: Susan Heine, Pat Homeister and Dennis Hayes sing during a rehearsal of the Waverly Warbelers. 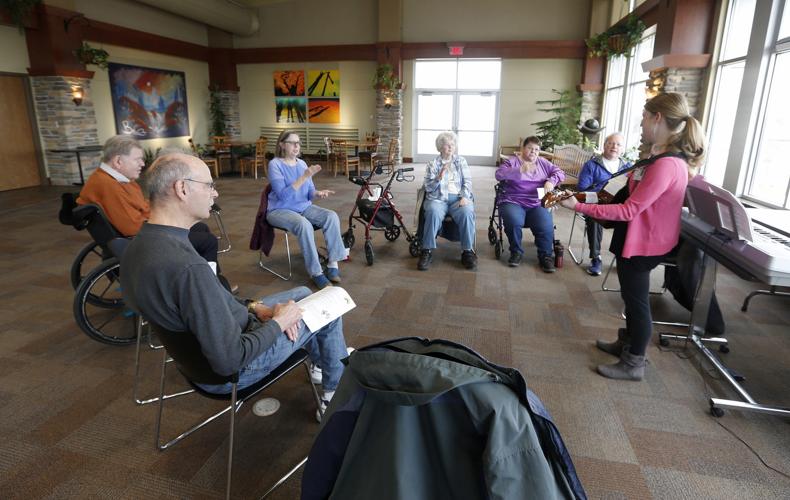 Music therapist Kara Rewerts leads the Waverly Warbelers, a group of Parkinson's patients who meet once a week to sing. Photographed Monday, April 2, 2018, at the Waverly Health Center in Waverly, Iowa. 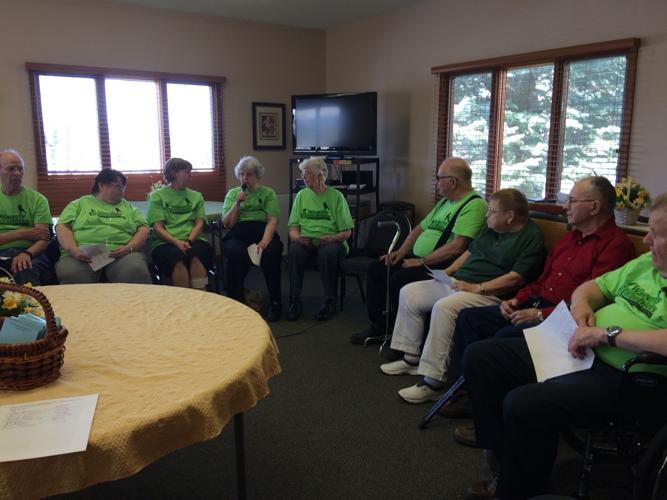 The Waverly Warblers perform at their annual Parkinson’s luncheon at the Waverly Senior Center in April.

WAVERLY — Terry Hertges of Waterloo was diagnosed with Parkinson’s disease in 2008.

“I thought I’d be in a nursing home by now,” she said on a recent morning.

She isn’t. Instead, she’ll perform a concert Friday at the Waverly Senior Center.

Hertges is a member of the Waverly Warblers, a singing group for Parkinson’s patients. The group will give a public performance at 12:30 p.m. Friday at the center.

Led by music therapist Kara Rewerts, the Warblers will sing a number of traditional songs, giving power to their voices both figuratively and literally.

Parkinson’s disease is a neurodegenerative disorder that causes tremors, muscle rigidity and balance and gait problems.

“It affects all your muscles, including those used for swallowing and speech,” said Hertges. “With Parkinson’s your speech gets softer and softer.”

The Waverly Warblers formed in 2014 as part of an Iowa State University study on music therapy for those with Parkinson’s. The group met weekly for eight weeks to sing, under the auspices of Rewerts.

After the study was completed, the group continued to meet for camaraderie and additional therapy work.

“It’s nice to be with people who understand what you’re going through,” Hertges said. “When you get a diagnosis it’s lonely; it’s scary.”

Outcomes from the Warblers and other Iowa groups involved in the study showed music therapy through singing strengthens the muscles related to swallowing and speech.

“You know, as a music therapist, that music is a really powerful tool. It’s kind of nice to have evidence to support what we’re doing,” Rewerts said.

Hertges said singing with the group helps her focus on keeping her voice strong.

“It helps you to use your diaphragm and breathe better,” she said.

Rewerts chooses songs that have wide vocal ranges and lots of words “to get their lips moving. With Parkinson’s people tend to mumble. We want them to have a voice.”

And not just a voice for singing, but a voice that also raises awareness for Parkinson’s disease, Rewerts added.

Hertges concurs, her wry sense of humor bubbling to the surface.

“April is Parkinson’s Awareness Month. That makes us laugh. We’re aware of it every month.”

"April is Parkinson's Awareness Month. That makes us laugh. We're aware of it every month."

After being hired for renovation work at Mount Moriah Missionary Baptist Church, 633 Walnut St., he instead stripped copper molding and fixtures from the 111-year-old building.

After a little more than 37 years in business, owner Jim Gilgen, 66, of Cedar Falls, said: “It’s just time. I’m getting older, and it’s the right thing to do.”

WATERLOO — Trial has been set for August for Waterloo’s former recreation superintendent who has been accused of stealing from the city.

UPDATE WITH NAMES: Injuries in Highway 63 crash south of Denver

WATERLOO — Three people were injured in a two-vehicle crash south of Denver on Friday.

Teen arrested for third gun in less than a year

WATERLOO — A Waterloo teen has been arrested on gun charges while awaiting trial for two other incidents where he was found with guns this year.

Police have identified the man who died after entering the Cedar River June 10 during the My Waterloo Days parade.

L-R: Susan Heine, Pat Homeister and Dennis Hayes sing during a rehearsal of the Waverly Warbelers.

Music therapist Kara Rewerts leads the Waverly Warbelers, a group of Parkinson's patients who meet once a week to sing. Photographed Monday, April 2, 2018, at the Waverly Health Center in Waverly, Iowa.

The Waverly Warblers perform at their annual Parkinson’s luncheon at the Waverly Senior Center in April.