Become a Member
Read Today's E-edition
Share This
On World Refugee Day, EMBARC honors Burmese and remembers those left behind
0 comments
Share this
1 of 2 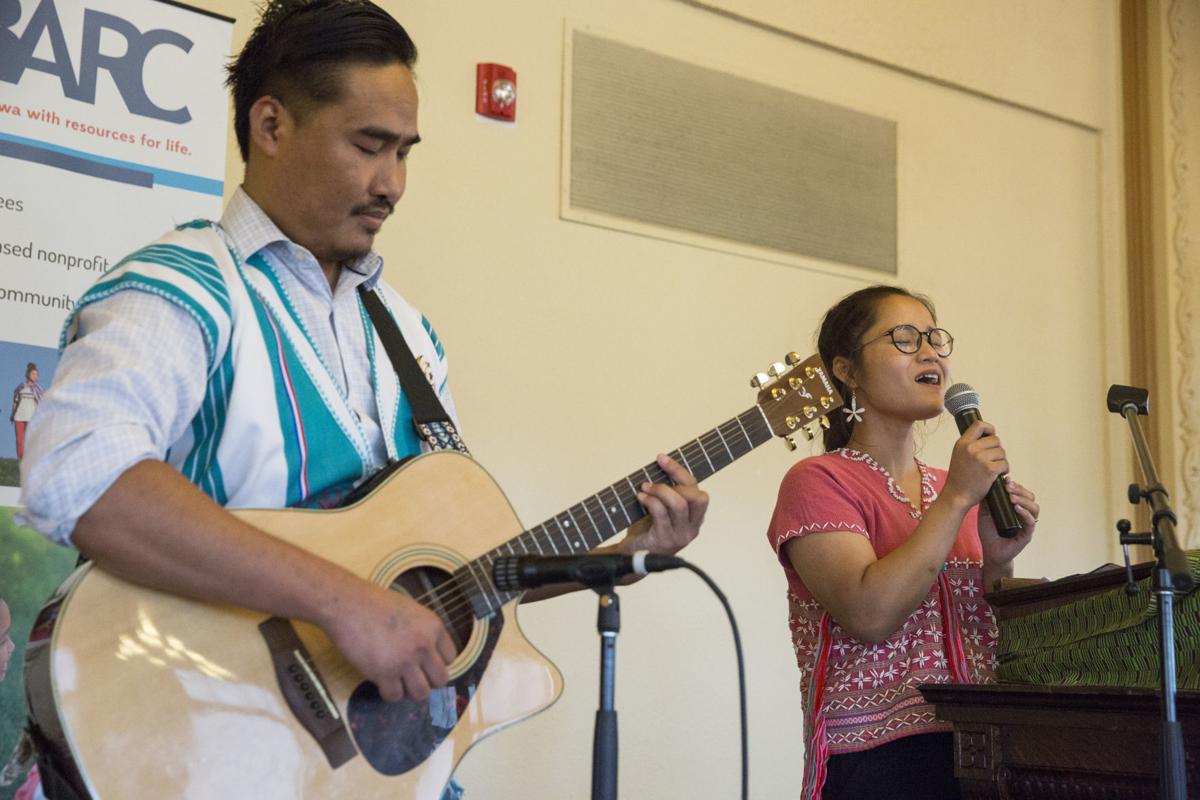 Grace Htee sings the closing song while accompanied by Saw Moon Rock on the guitar during the World Refugee Day with EMBARC event on June 20. 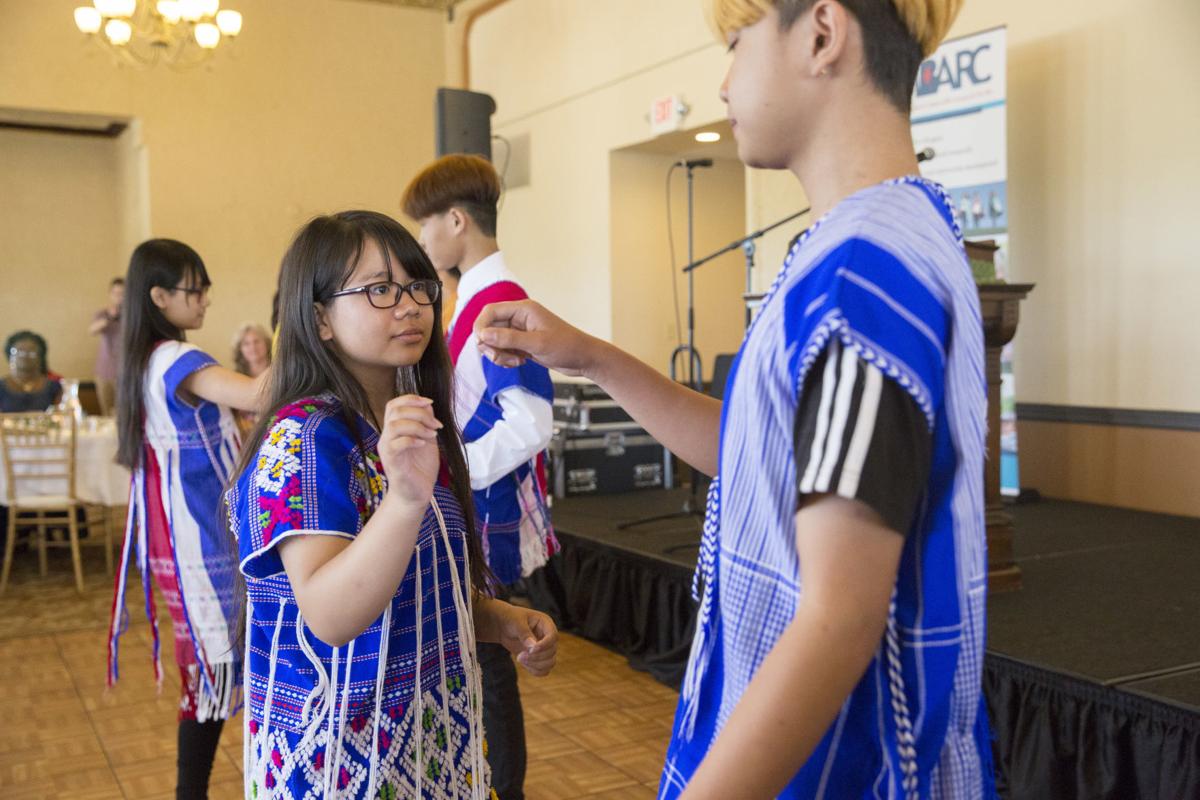 Dece Paw, left, dances with her partner Mee Rah while wearing traditional Karan attire during a Karenni Dance at the World Refugee Day with EMBARC event on June 20.

WATERLOO — When Rachel Cherput arrived in Waterloo in 2011, she had a 1-year-old, was pregnant and didn’t speak a word of English.

Yet she was due for a pregnancy checkup at a local hospital, so she went — despite not being able to communicate.

“I was nervous,” Cherput admitted, remembering how she sat in the waiting room for hours, not even realizing she had to check in. “When I finally saw the doctor, I could not say anything. I had no interpreter — I had no voice.”

After that experience, Cherput said she was determined to improve — both her language skills and her understanding of American culture, because it was quite different from her native Myanmar. In 2015, she joined the Ethnic Minorities of Burma Advocacy and Resource Center, or EMBARC, a Des Moines-based group with a Waterloo chapter, and found a home.

Now, as EMBARC Waterloo’s lead family advocate, Cherput is on the other side, helping pregnant refugee women who don’t speak the language or understand the process of a doctor’s office get the care they need.

“I am proud to see how refugees help other refugees,” Cherput told around 150 people gathered Thursday to celebrate World Refugee Day. “This is why I am here, and this is why EMBARC is here.”

It was EMBARC Waterloo’s first celebration of World Refugee Day, held in the Skyroom in the Black’s Building in Waterloo.

“The message is, first, to celebrate their courage and perseverance to go through this challenging life, and also to remind people around us that there are those not around,” said REACH program director Halkeno Tura.

The vast majority of EMBARC Waterloo’s clients — more than 75% — are Myanmar refugees, Tura said. But EMBARC isn’t limited to Burmese — they’ve also helped refugees from other countries, like the war-torn Democratic Republic of Congo or Sudan.

That included Julie Molisho, a refugee from Congo who said she was happy to see the successes of the organization, but noted more programs were needed.

“The growing number of Congolese is currently beyond EMBARC’s capacity,” she said.

Millions of people worldwide are displaced from their homes each year, due to war, violence and even — in the case of Marshall Island refugees — because of environmental factors like rising sea levels. Tura noted 300 people were forcibly displaced just in the 10 minutes he’d been talking. Only around 1% are resettled.

“We are now witnessing the highest level of displacement,” he said.

Tun Than, who presented a moment of silence for those refugees left behind in camps, thanked Tyson Fresh Meats in particular as an employer — he said it’s the reason he and many others eventually came and stayed in Waterloo.

“We came here as refugees, but now we became United States citizens. Now, we are in our home,” Than said.

“With a united goal, we can help the refugee community out of poverty and into self-sufficiency,” Molisho said.

That’s true for A Dah, born in a Thailand refugee camp and brought to the United States as a child by her mother, who she said sacrificed everything so her children could have a better life and education.

“Thanks to EMBARC, I am continuing my degree at Hawkeye (Community College),” Dah said. “I made my mom proud.”

WATERLOO — A dual-language immersion program started at Lou Henry Elementary in September is growing and expanding to a second school.

WATERLOO — The metro area is home to a significant French-speaking population.

WATERLOO – A wave of red washed through the Five Sullivan Brothers Convention Center Saturday night as a displaced nation celebrated its roots.

A statewide organization with a local presence is asking for the community's help in voting for them to win a $125,000 grant from Google.

EMBARC, a statewide refugee assistance organization with a robust Waterloo presence is the winner of a "People's Choice" grant from Google.

Cultural differences are just one barrier to child care that refugees from Burma, the Democratic Republic of the Congo and other countries face as they try to navigate their lives in Waterloo, a new survey has found.

"I wish we could be together. I left my mom when I was just 12 years old. I'm hoping they can come, and we can be together."

Grace Htee sings the closing song while accompanied by Saw Moon Rock on the guitar during the World Refugee Day with EMBARC event on June 20.

Dece Paw, left, dances with her partner Mee Rah while wearing traditional Karan attire during a Karenni Dance at the World Refugee Day with EMBARC event on June 20.