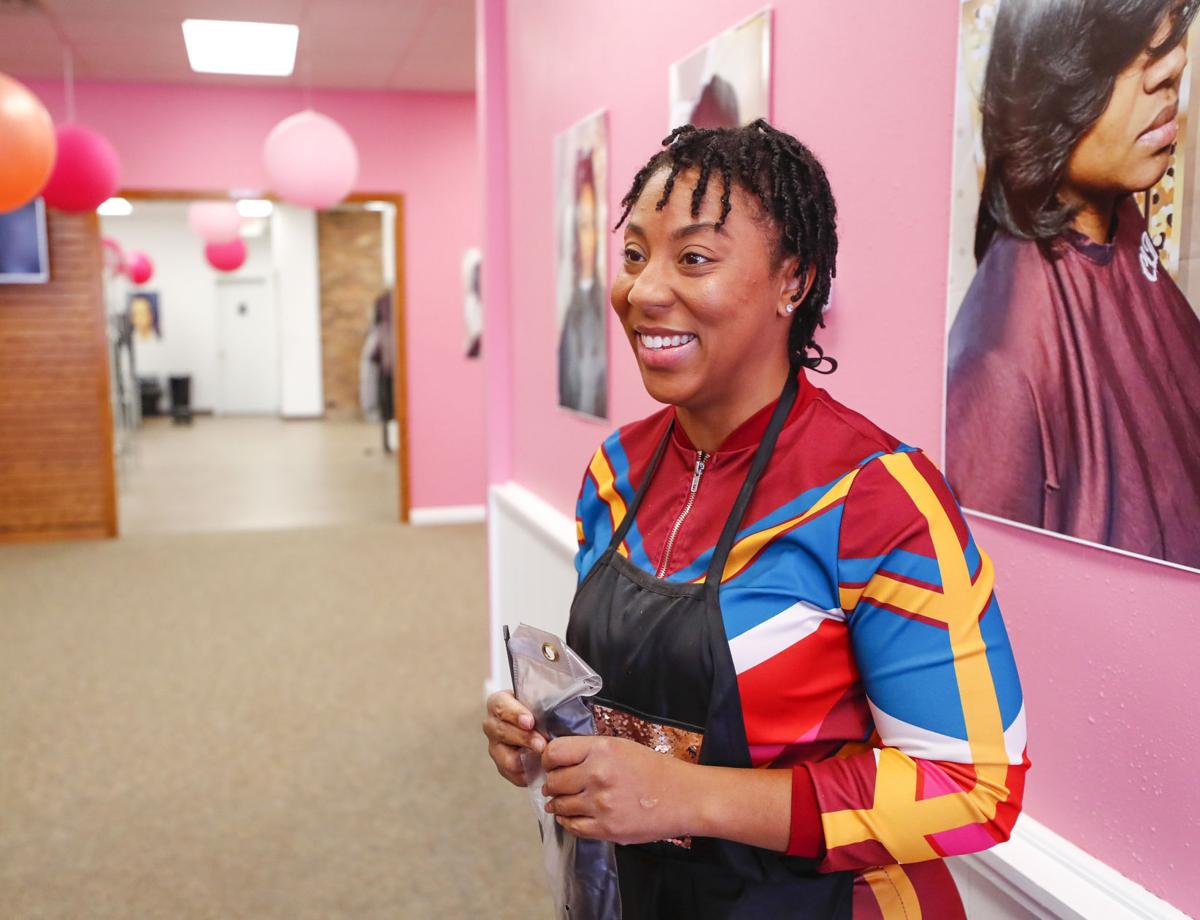 Taneia Galloway, owner of the newly opened Doll House Bundles Collection on Kimball Avenue, talks about the feedback she has received since opening in December. 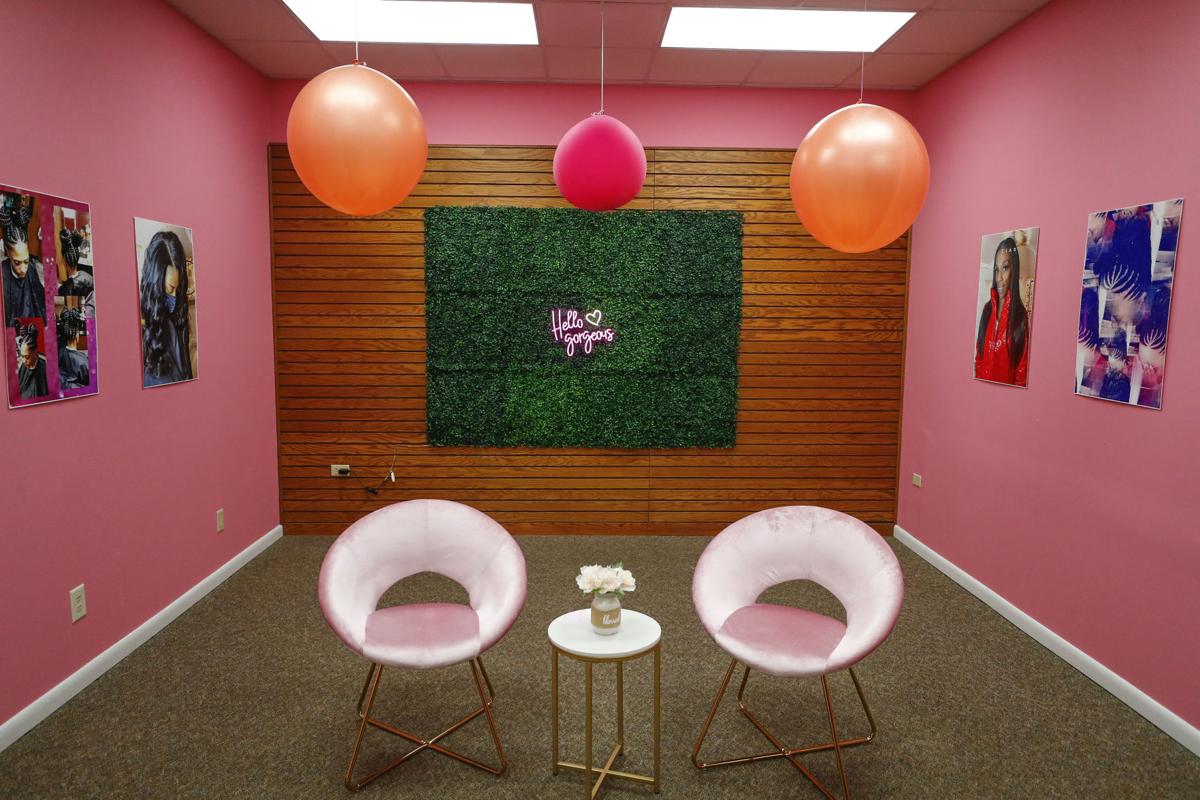 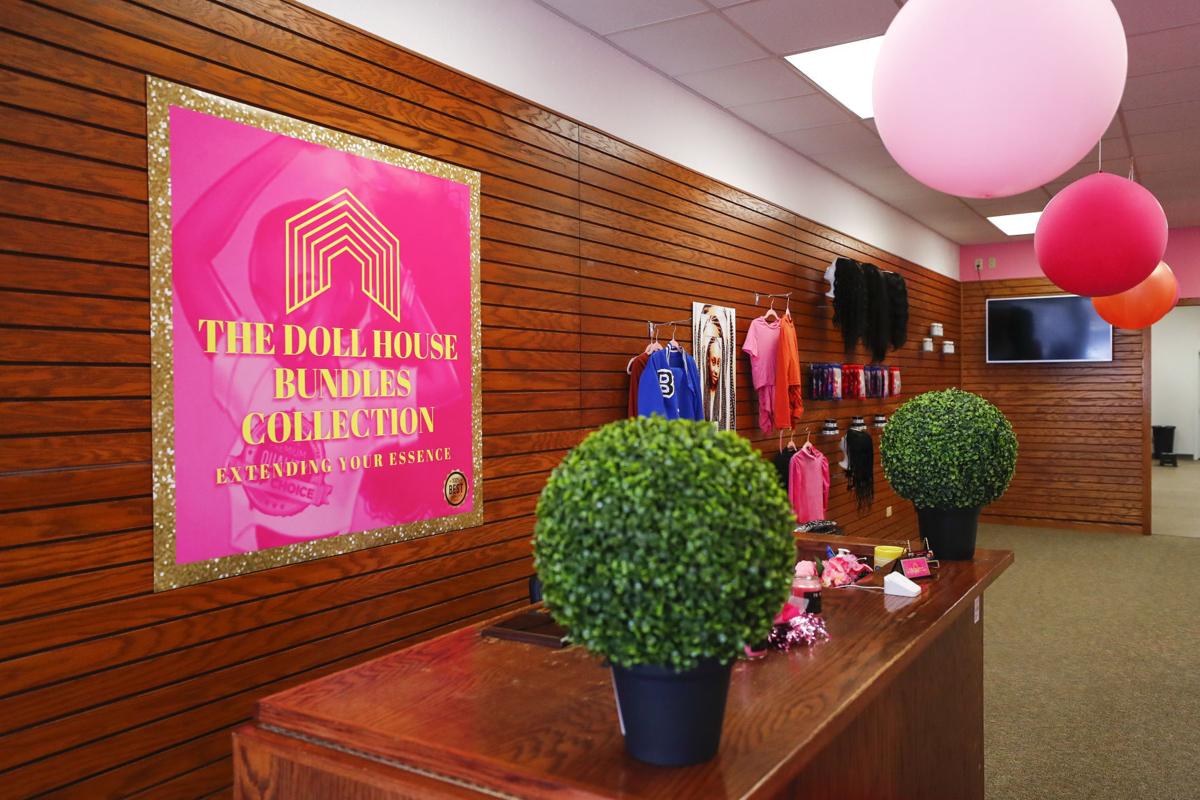 The interior of Doll House Bundles Collection on Kimball Avenue in Waterloo. 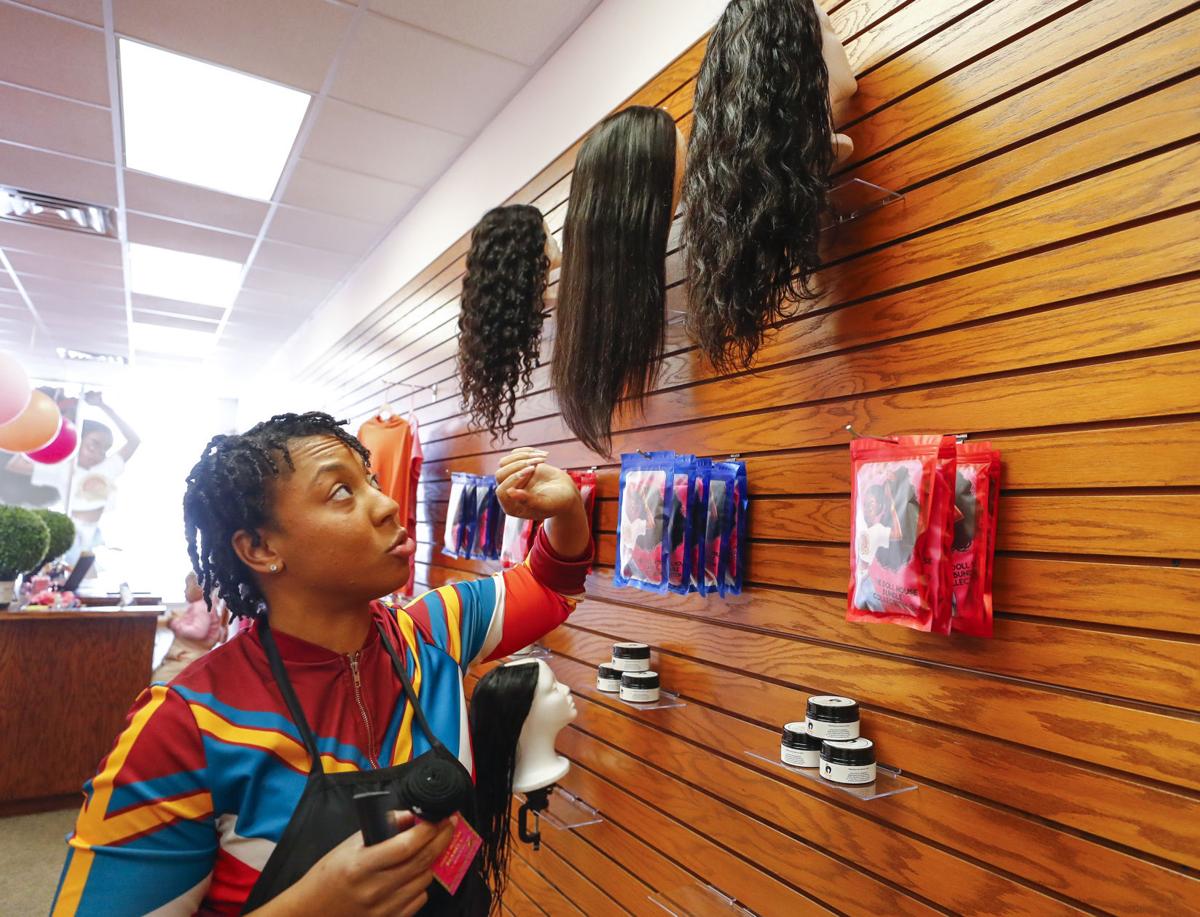 Taneia Galloway, owner of the newly opened Doll House Bundles Collection on Kimball Avenue, talks about the services and products available at her salon. 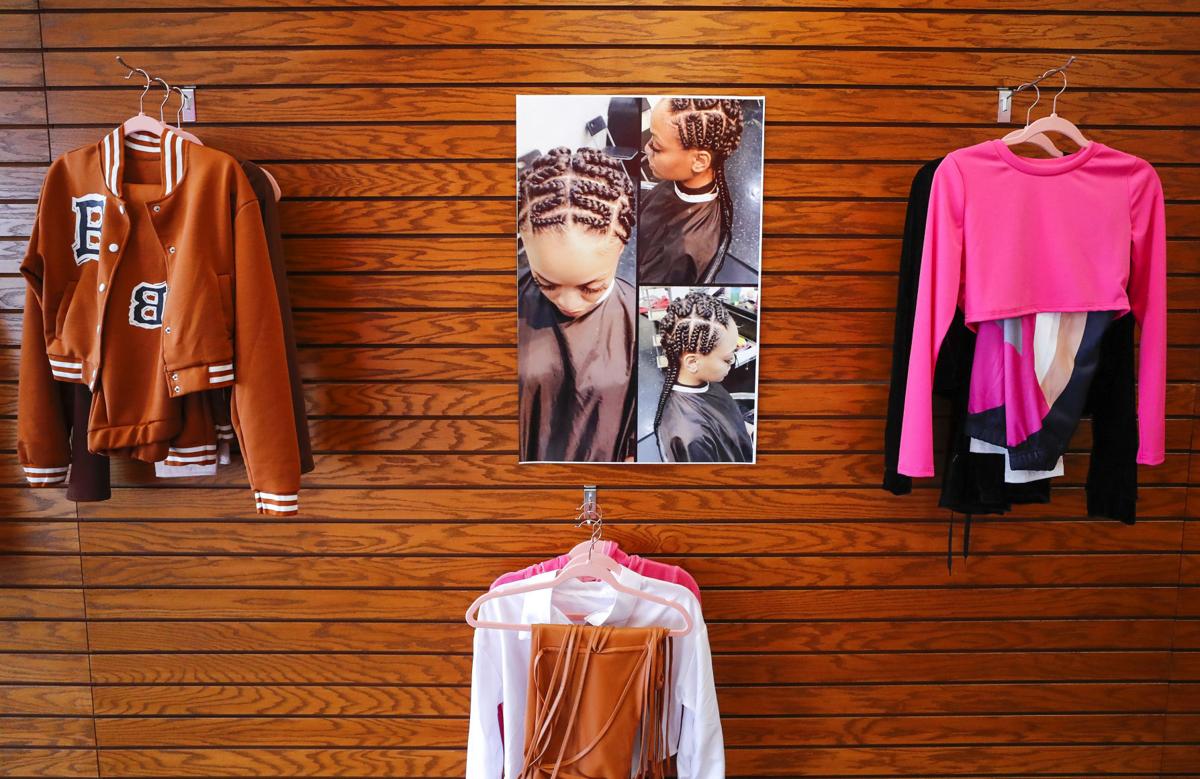 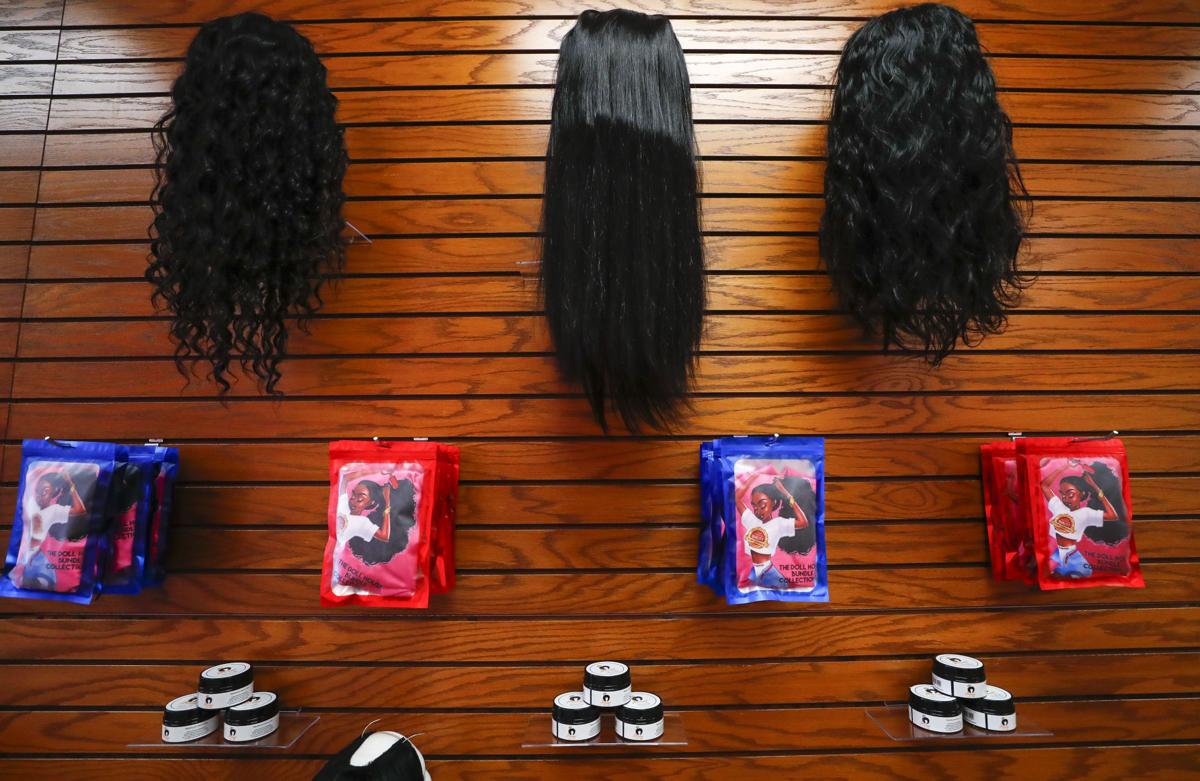 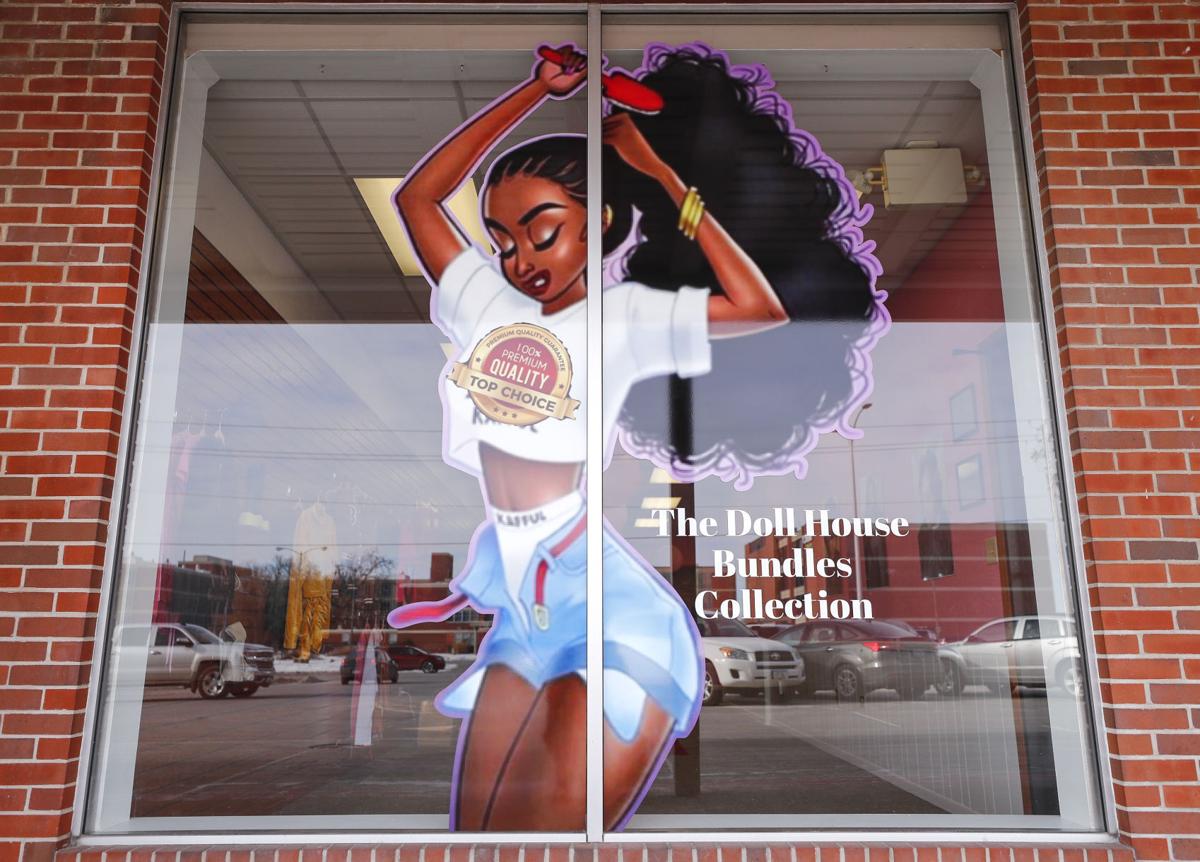 WATERLOO — Taneia Galloway’s previous salon, The Red Room, was tucked away in the lower level of a triplex building, hidden from view and only around 400 square feet when she opened it in 2016.

That was too small — and too unknown — to expand into the kind of salon Galloway envisioned by last May, when she decided to look for a new space.

“This is a dramatic change,” Galloway said, standing inside The Doll House Bundles Collection, at 2124 Kimball Ave. in the Ridgeway Plaza in Waterloo. “I can see myself growing here.”

“I would say that my expertise is in hair growth and hair maintenance,” she said.

That includes hair extensions, wigs, custom-branded hair bonnets, silk press and other services. She also creates and sells her own brand of sea moss, Boobies Wild Crafted Sea Moss, a consumable gel Galloway says helps build up the immune system, as well as women’s apparel and footwear under The Doll House Boutique.

The popularity of Galloway’s hair extensions, or bundles, is one of the reasons she changed the name of her salon. The bundles, as well as the U-part wigs — which run from straight to loose waves to deep, curly waves — are designed to be protective styles, keeping the underlying hair healthy.

“African-American women love to have their hair braided so that it grows underneath, but we also like to look really nice,” Galloway said. “So the bundle itself just kind of gives us a versatile option to have our hair grow, and also have it look very stylish while the hair underneath is growing.”

The most popular, she says, are either the body wave or deep wave wigs and extensions.

“Women love the body wave because it’s so versatile,” Galloway said. “It straightens completely straight, but also is kind of like an ice-cream bounce to it initially.”

Her stylists include dread loctician Lesley Arndt, an esthetician, Monique Hinton, who will do waxing, eyebrows and makeup, and space for at least one more stylist.

Galloway is also a recent graduate of the Black Business and Entrepreneurship Accelerator, part of the 24/7 Black Leadership Advancement Consortium.

“That was another way for a lot of people to know that I’m here,” she said.

Though she’s been busy, she’s also working on Doll House’s interior design, including greenery on the walls inspired by a recent trip to Tulum, Mexico.

“It was so beautiful and intimate and tropical, I’m like, ‘I want to implement some of that into my space,’” Galloway said.

And while that part’s still coming along, business has been booming.

“People love it,” Galloway said. “So now I want to flourish: I want to build a brand and become better. ... I’m super excited to be back.”

This article was updated Jan. 10 to add the name of the esthetician.

As a reporter with The Courier beginning in 2007, I have been so fortunate to get to know my community better and learn something new every day I'm on the job. Some stories stick with you a bit more than others, especially the ones that resonated so much with the Cedar Valley that I keep hearing about their impact. Here are a few such stories I had the privilege of writing this year.

'It is not OK to say the word': Students, BLM activists protest outside Cedar Falls High School

CEDAR FALLS — As students milled about outside of Cedar Falls High School awaiting the start of a Black Lives Matter protest, a few pick-up tr…

'It's life changing, even if you don't die:' Months later, survivors of COVID-19 not sure if life will ever return to normal

"The discussion is always, 'Will it go away? Will our bodies adapt, or is this something that is permanent?' Which is a big worry."

'The Young and Forgetful': Mom, family embrace the lighter side of Alzheimer's diagnosis

If you need to test the theory that laughter is the best medicine, you might take in an hour visiting the Payne family. They insist you do, in fact.

Matt Rolinger was the picture of success -- and a meth addict. His family speaks out

"There are some people that would say that Matthew was a stain on our family's reputation. That's not how we see it at all."

'You literally starve to death:' CF woman, dying of gastroparesis, hopes for kindness

"The biggest thing for me, I think, is awareness for it ... but also just to remind people to be kind, be a good human."

Islamophobia was around before Sept. 11, but the attitudes changed after the attacks, with some condemning the entire religion for the actions of a few radicalized individuals.

The African American Cultural Center in Waterloo has been ignored, disparaged and beleaguered by leadership setbacks over the years. Now, they’re trying to become something the founders envisioned: a beacon of the city’s rich Black history.

A traffic stop of a Black Waterloo resident this summer has been concluded as a "case of mistaken identity," according to police, while the man police detained says he hopes for changes to how police make such stops in the future.

Three of the four races were won by Black candidates, meaning along with current Ward 4 councilor Jerome Amos, the council is majority Black for the first time in history, as well as being lead by a Black mayor.

A Waterloo man has been arrested for trying to steal a vehicle following a home break-in.

Police are investigating an overnight shooting that damaged a vehicle with people inside.

A man suspected in the shooting death of his girlfriend and shooting and injuring his teenage daughter in Wisconsin was taken into custody after a standoff at a Waterloo home Wednesday.

The owner of a Jesup trucking company has been sentenced to a year and nine months in federal prison for allegedly failing to pay taxes.

Customers stood in line to place their orders for gourmet burgers, cupcake shakes and other menu offerings. Some folks also managed to snag a …

Taneia Galloway, owner of the newly opened Doll House Bundles Collection on Kimball Avenue, talks about the feedback she has received since opening in December.

The interior of Doll House Bundles Collection on Kimball Avenue in Waterloo.

Taneia Galloway, owner of the newly opened Doll House Bundles Collection on Kimball Avenue, talks about the services and products available at her salon.