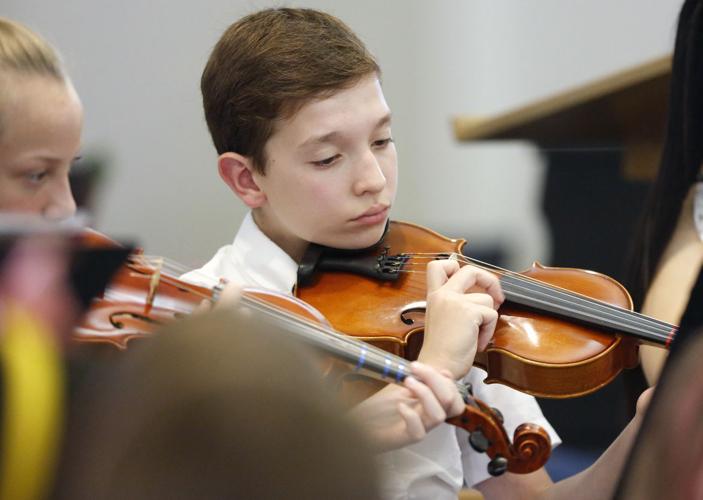 Sixth-grader Ervin Rizvic plays the violin during a No Strings Attached concert held at Unity Presbyterian Church on Friday in Waterloo. 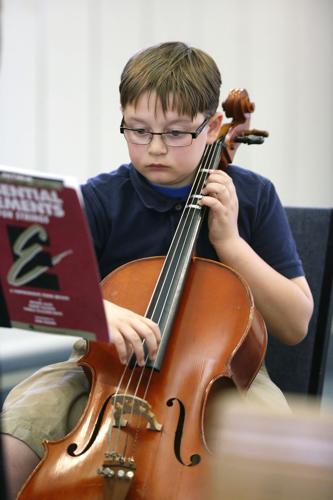 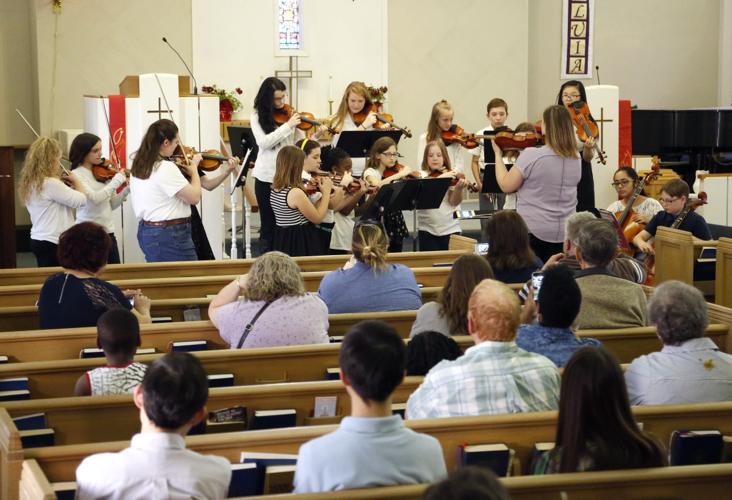 Macaulley Whitlock, right, the Hoover Middle School orchestra teacher, directs No Strings Attached in a concert at Unity Presbyterian Church May 20 in Waterloo. 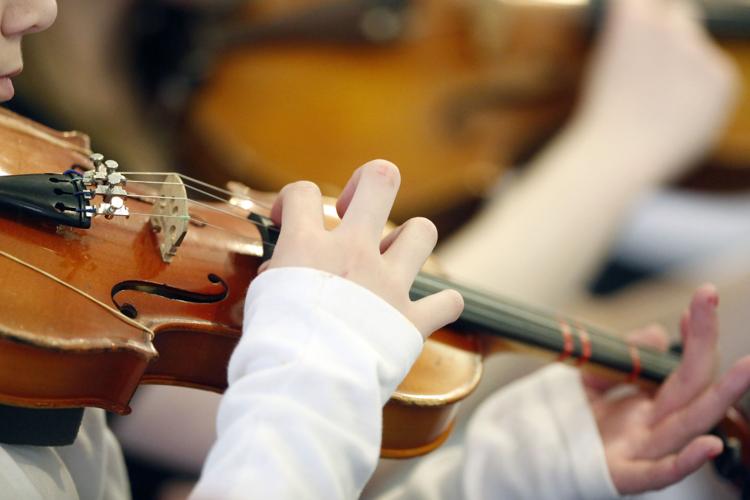 A young violinist plays during a concert with the Kittrell Elementary after-school strings program called No Strings Attached held at Unity Presbyterian Church. 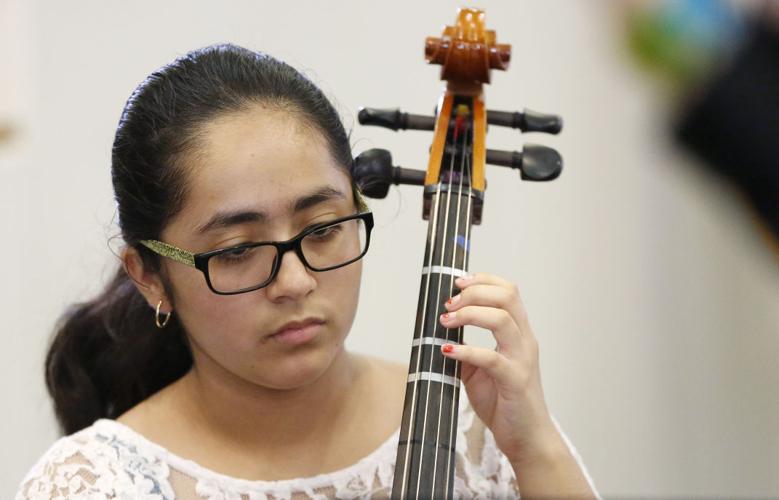 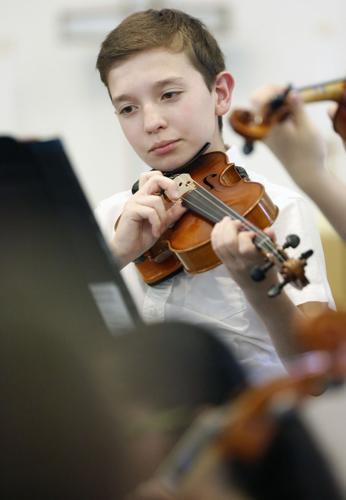 Sixth-grader Ervin Rizvic plays the violin during a No Strings Attached concert held at Unity Presbyterian Church May 20 in Waterloo.

WATERLOO — It’s something you don’t hear much anymore.

A dozen or so fourth- and fifth-graders from Kittrell Elementary, clad in white shirts and black pants, plucked strings on their violins, violas and cellos.

Since the Waterloo School District cut the elementary band and orchestra programs a few years ago, students like those who played a concert at Unity Presbyterian Church in Waterloo on Friday have had to find instruction elsewhere.

That also means paying for their own instruments and private lessons as well as securing transportation — putting elementary music education out of reach for many.

“In Waterloo, there was an opportunity for a program that was affordable and offered good-quality instruction for string players,” said Christine Kaplunas, Unity’s pastor.

So Kaplunas — who has a bachelor of music in violin and plays with the wcfsymphony — took that idea to Kittrell Elementary’s principal: an after-school string orchestra, once a week, held at Kittrell for just $20 per student.

“She jumped at that idea,” Kaplunas said.

The Unity-Kittrell connection, forged through Partners in Education, began in January as No Strings Attached.

“No Strings Attached is obviously a pun. We have a few strings attached: four,” Kaplunas joked with the crowd of parents and Unity parishioners at the Friday night optional concert. “Even though this is a partnership, we do this as a gift out of our own hearts, with no strings attached.”

The district agreed to let her use orchestra instruments that had been gathering dust in storage, and Kaplunas fixed them up with a grant from North Central Iowa Presbytery.

With that grant money, she was also able to hire two orchestra teachers — Macaulley Whitlock from Hoover Middle and Becca Payne from East High — to help guide the 41 students who enrolled.

“I like that students younger than sixth grade get to start on an instrument,” said Payne, who specializes in viola. “I like seeing their excitement and their faces light up when they get to play a note and play it well.”

Whitlock, who specializes in cello, has a more practical need: As of now, her sixth-graders generally start orchestra with no previous instruction, and Kittrell students generally continue their education at Hoover Middle. Some Hoover students played with the younger children in Friday’s Unity concert as a show of support.

“I knew it would help us out at Hoover — help kids get a head start — if they have that solid foundation,” Whitlock said.

The first official No Strings Attached concert will be 4 p.m. Wednesday in Kittrell Elementary’s gymnasium.

Kaplunas said she wants the orchestra to continue year after year and possibly have Unity become a music academy of sorts, where elementary students and others can receive affordable, private instruction.

“They can do great things, and this is one of many great things — this is also about becoming empowered as leaders,” she said.

Police and paramedics were called to the 300 block of Manson Street early Sunday, where they found a female gunfire victim in a car who was later pronounced dead.

Jorden Wallican, an IB Diploma student, was motivated to be a high-achieving student so she could attend a top-ranked out-of-state university.

The 26-year-old woman was a passenger in a Dodge that was fired upon at Sumner and Manson streets during the early morning hours Sunday.

The crime, which involved a scheme to steal guns and get them onto the street, has left members of the family that lives in the home fearful and on edge.

Sixth-grader Ervin Rizvic plays the violin during a No Strings Attached concert held at Unity Presbyterian Church on Friday in Waterloo.

Macaulley Whitlock, right, the Hoover Middle School orchestra teacher, directs No Strings Attached in a concert at Unity Presbyterian Church May 20 in Waterloo.

A young violinist plays during a concert with the Kittrell Elementary after-school strings program called No Strings Attached held at Unity Presbyterian Church.

Sixth-grader Ervin Rizvic plays the violin during a No Strings Attached concert held at Unity Presbyterian Church May 20 in Waterloo.