People will be able to play arcade basketball for free at David's Taphouse & Dumplings.

CEDAR FALLS — Parents will soon have a spot in Cedar Falls where they can enjoy world-class brews while eating dumplings, playing with Legos and shooting hoops with their kids.

David’s Taphouse and Dumplings, 200 W. First St., will open this month in a new 3,600 square foot space that seats 120 people at a corner across from the Little Red Schoolhouse and next to a barbershop called The Shop.

The establishment prides itself on promoting one of the most family-friendly environments in the Cedar Valley, and exclusively serving at least a dozen Toppling Goliath Beers, as well as Verve Kombucha, soda, wine and a small assortment of mixed drinks using only Iowa-based spirits.

Toppling Goliath Brewing Company is known for its IPAs and barrel-aged stouts.

In addition, the taphouse will offer 14 types of dumplings – from Mongolian beef to mac and cheese to teriyaki tofu and shiitake mushrooms – all from scratch, from the dough to the fillings and everything in between.

And let’s not forget the “super vegan-friendly” menu, as well as gluten-free options like chicken skewers and loaded fries.

Families will have the chance to meet Sue, a nearly seven-foot tall, purple and green dinosaur constructed out of Legos in the area for kids, which also includes a wall and two tables for construction with the familiar colorful blocks.

Visitors will have other fun options, like jumbo Connect Four and playing basketball at either an arcade basketball setup, a “Pseudo Sue-themed Pop-A-Shot” or on a full-size basketball hoop.

And all the kid options are free to use.

One of the visionaries behind the new operation is Andy Anderson, an entrepreneur who moved to Cedar Falls in 2013 with his wife, Yi Cheng. The Boone native also is a business professor teaching supply chain management at the University of Northern Iowa.

“We looked around Cedar Falls, and there just wasn’t really any cool ethnic food options around,” he said. “It had your standard Chinese restaurants, Mexican restaurants, and a few really good Indian restaurants, but we just love dumplings so much, and we just wanted to do that.”

Anderson is a regular traveler, and lived in China after meeting his wife of 10 years in graduate school in England. A beer and dumpling shop in Australia was part of the spark for his new business.

“I lived in China for about four-and-a-half years, and I’d say dumplings are the food that I ate most often in China,” he said. “It’s like the pizza of China. We make dumplings for our friends all the time in the United States, and everybody loves them. I’ve literally never met a person who doesn’t like dumplings.”

When customers walk inside, they’ll notice an area elevated four feet off the ground that can be reserved for private parties and will overlook the main floor, which will include short and tall square tables as well as the bar.

Besides being family-friendly and catering to beer geeks, Anderson said, one of its big focuses will be “experience-based offerings.”

Brass Tap offers $200 to employees who get vaccinated

“People aren’t looking for just good service when they come into a restaurant, they want to have an experience at that place,” he said, “A place they would go for more than just sitting down and having a meal.”

During an evening sit-down at David’s Taphouse and Dumplings, the question — “Who is David?” — might pop up during conversation. Because the establishment sells Toppling Goliath beer, the name references the biblical story of David and Goliath. It represents the beer company: “This scrappy upstart from Decorah, Iowa, taking down the giants in the beer industry,” Anderson said.

“We’re really excited about the Toppling Goliath component,” he said. “It’s one of the top breweries in the world, and their beer is truly phenomenal, so that’s the only type of beer we’re going to sell. We think it will draw a slightly different crowd, which complements what we’re doing with the dumpling side. We expect some people will come just for the Toppling Goliath beer.”

The taphouse will be open from 11 a.m. to 9 p.m. Wednesday, Thursday and Sunday from 11 a.m. to 10 p.m. Friday and Saturday, with “floor captains” assisting customers. Monday and Tuesday will designated as “ghost kitchen” evenings from 4 to 8 p.m., meaning drink and food options will be available for pick-up or delivery.

“One of the largest growing demographics in Cedar Falls is young families, so we’re pretty excited about it, and we think this is going to make Cedar Falls an even more desirable place for people with kids of all ages,” Anderson said.

People will be able to play arcade basketball for free at David's Taphouse & Dumplings. 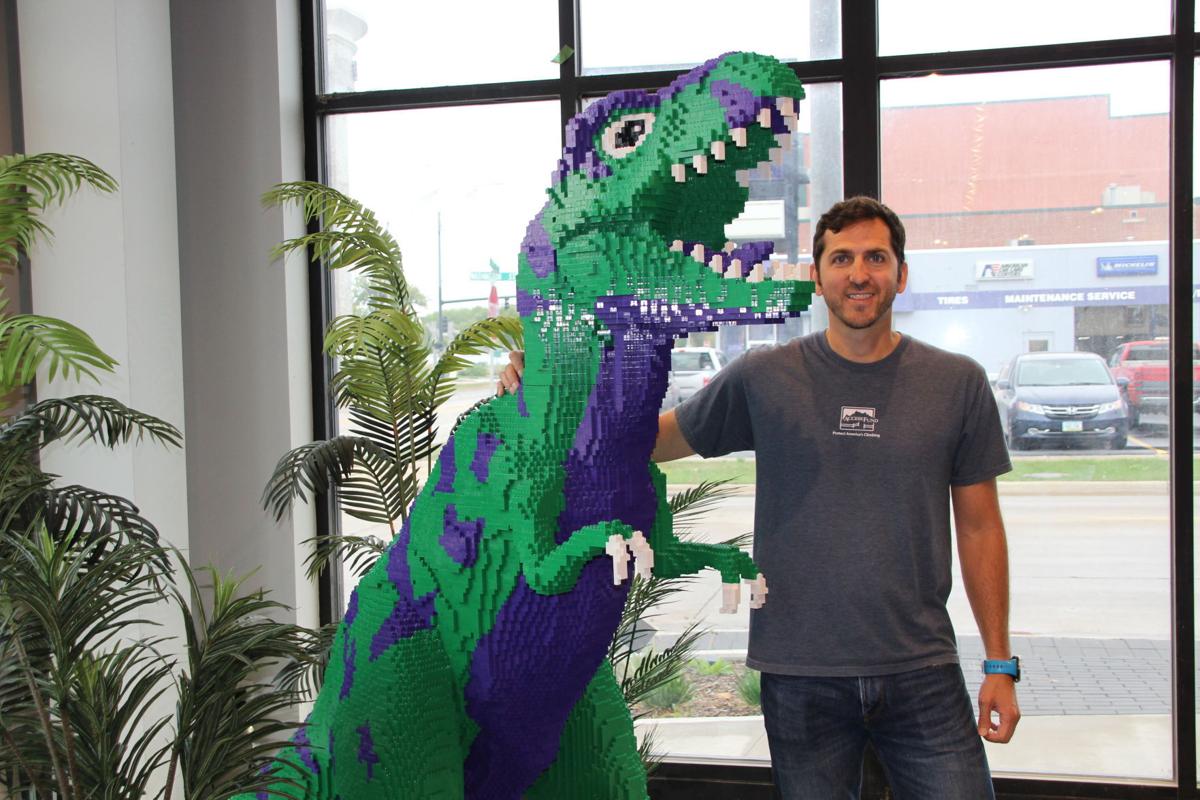 Entrepreneur Andy Anderson stands next to to the Lego dinosaur greeting customers at David’s Taphouse and Dumplings. 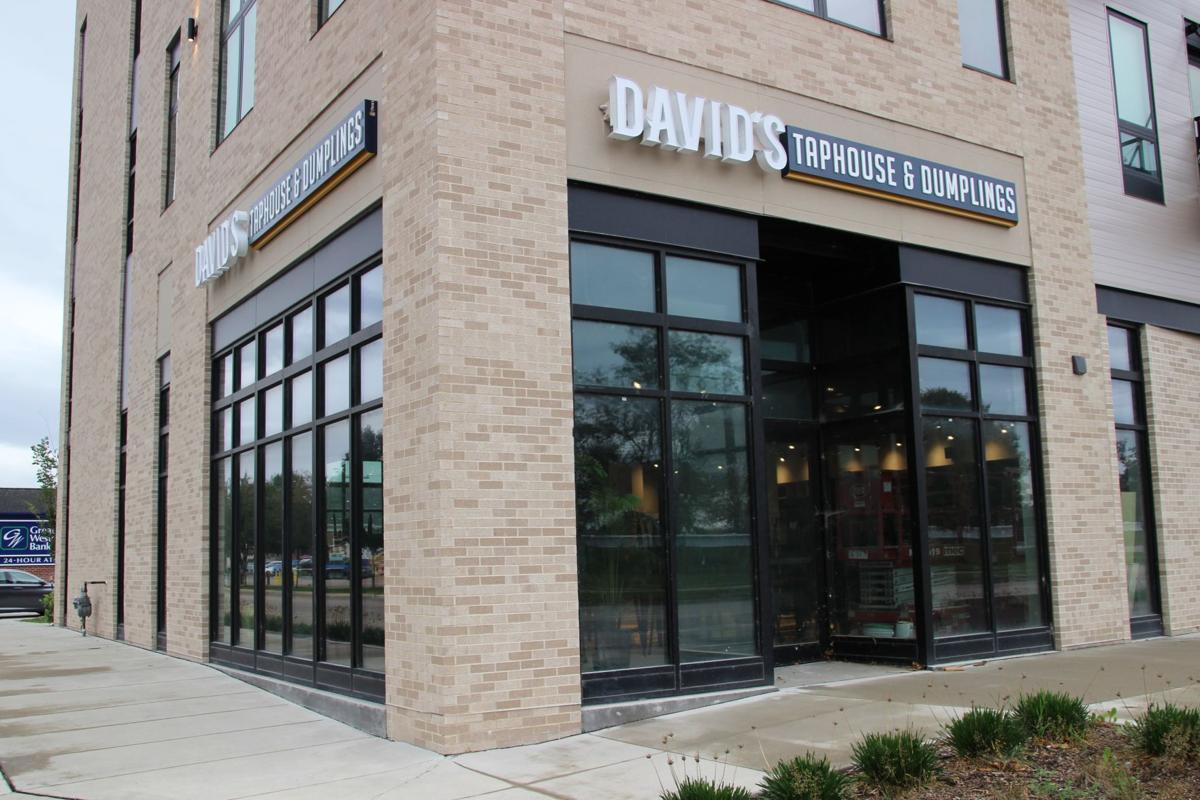 David’s Taphouse and Dumplings will open this month at the corner of West First and Washington streets in Cedar Falls. 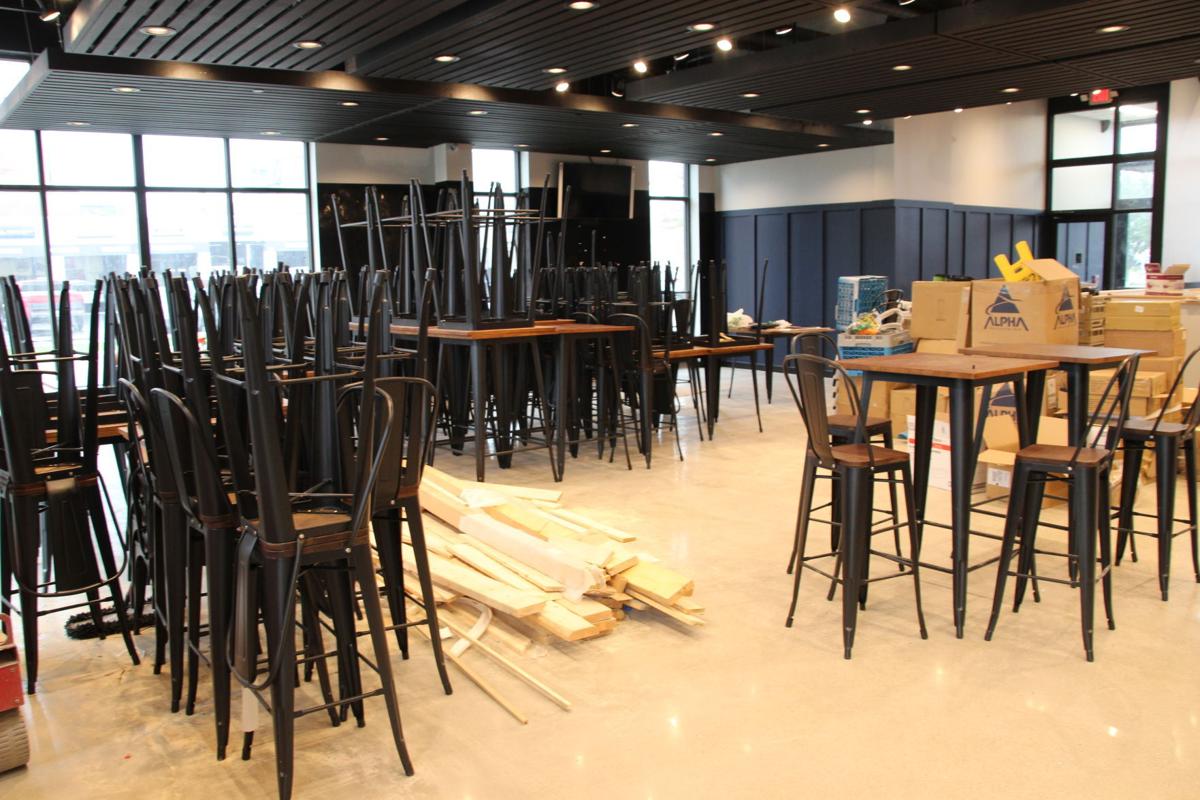 Staff are wrapping up work in the new space before the grand opening at the end of this month at David's Taphouse in Cedar Falls.