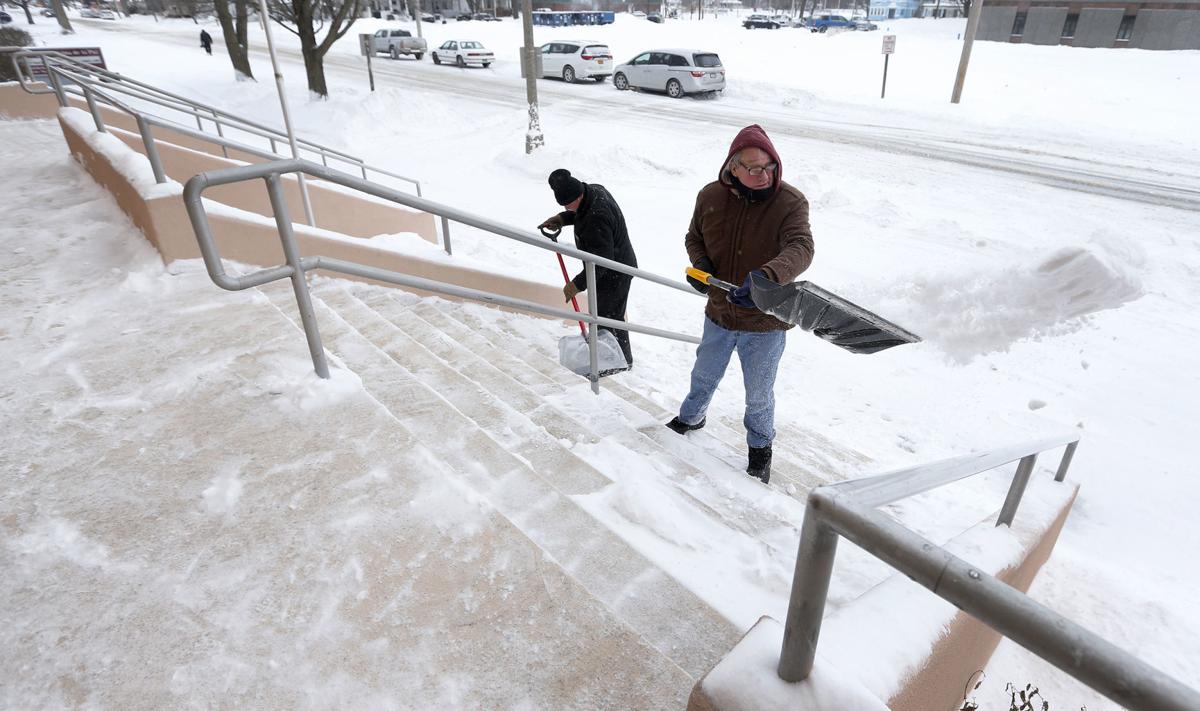 Bryan Vaughn, right, and Rick Milks clear snow from the front steps of Queen of Peace Church on Mulberry Street in Waterloo Monday. 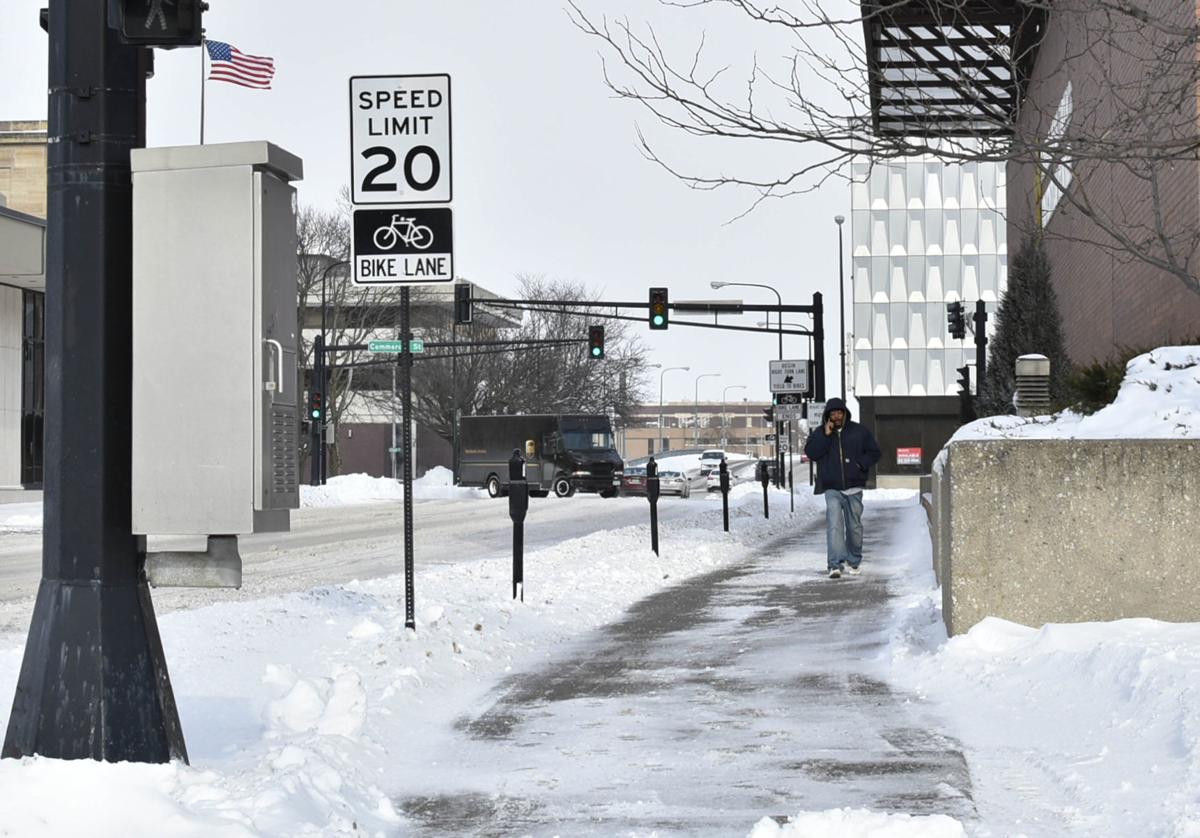 A man makes his way down East Park Avenue in bitter cold Monday. 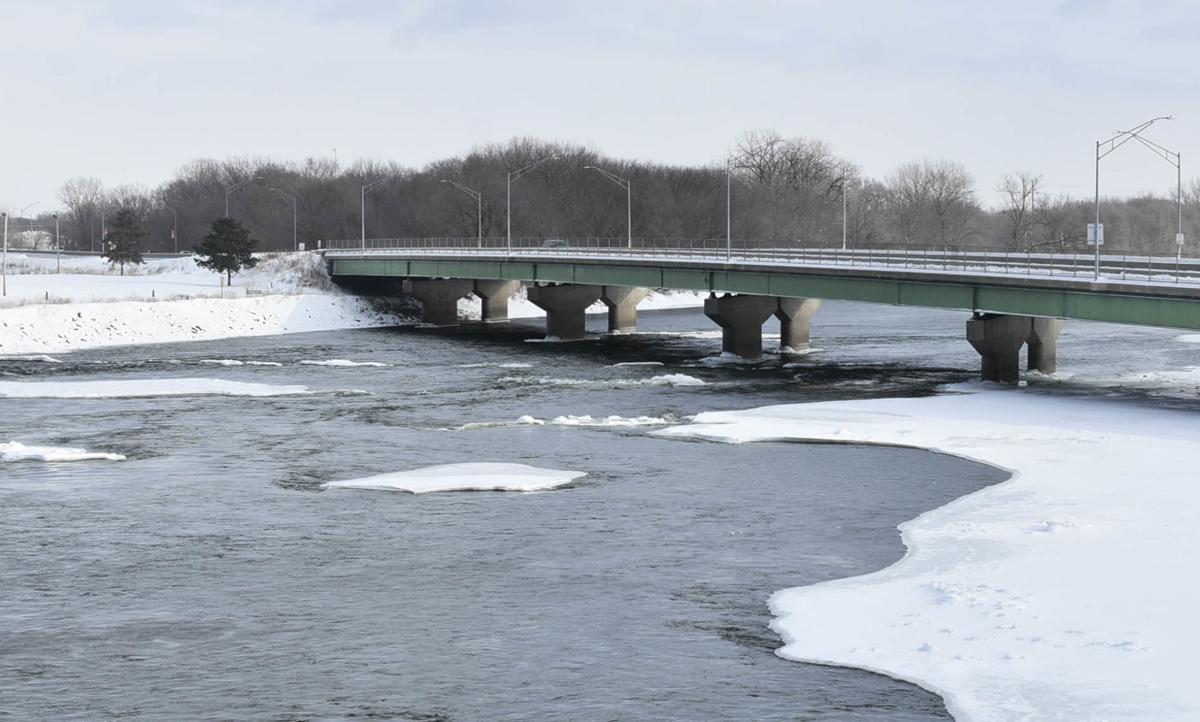 A frosty Cedar River near the First Street Bridge in Cedar Falls on Monday. 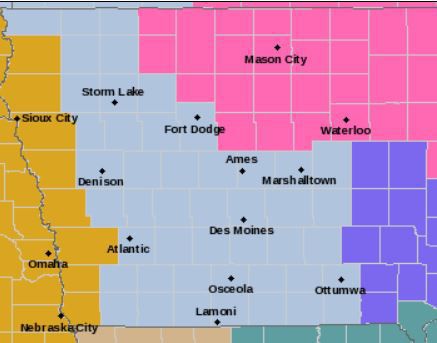 The area in pink is under a winter weather warning.

WATERLOO — Schools across Northeast Iowa and all three state universities are closed as temperatures drop to dangerous near-record lows today and Wednesday.

The high today is forecast at minus 4 degrees with a wind chill around minus 30, according to the National Weather Service. Tonight’s low will be around minus 27 with a wind chill at minus 55. Wednesday’s high is expected to be minus 17, with an overnight low of minus 31, near the record low for Waterloo of minus 34 set Jan. 16, 2009, and in 1914.

The University of Northern Iowa also canceled classes from 5 p.m. today to noon Thursday. The campus will have reduced operations Wednesday.

UNI courses taught by eLearning will proceed as scheduled.

The University of Iowa and Iowa State University also canceled classes from 5 p.m. today through 12 p.m. Thursday on the Iowa City and Ames campuses.

Schools closed due to snow in both Waterloo and Cedar Falls on Monday, and superintendents at both districts say more days off are coming.

“It’s always our preference to have kids in school,” said Waterloo Superintendent Jane Lindaman. “When it gets (to) negative 30 below wind chill, that’s when we start to have a conversation about how we can keep kids safe.”

Superintendents also need to consider if buses will function.

“The diesel buses run on diesel fuel, and that can gel, as well,” said Cedar Falls Superintendent Pattee.

Experts stress such extreme temperatures are dangerous and urge people to limit exposure to the cold as much as possible.

“You’re talking about frostbite and hypothermia issues very quickly, like in a matter of minutes, maybe seconds,” said Brian Hurley, a meteorologist with the Weather Prediction Center in Chicago.

Residents also are warned vehicles often break down and water pipes can freeze in such bitter cold. Cold weather advisories are in effect across a broad swath of the central U.S.

On Friday, a frozen sprinkler head at Hotel President burst after a heater went out in the building’s ninth-floor mechanical room, sending water down a stairwell.

A frozen water pipe burst early Monday at the Cedar Valley TechWorks, flooding the offices of the Greater Cedar Valley Alliance and Chamber.

He suggested residents monitor water temperatures by holding an outdoor thermometer under a running cold water faucet. If the temperature is below 40 degrees, Wilberding said, residents should keep a small stream of cold water running at all times.

Indoor water pipes next to exterior walls also should be protected from freezing.

Cleanup of the downtown Waterloo area begins at 6 tonight. All vehicles downtown must be moved. There is free parking in the ramps until 7 a.m. Wednesday and under the U.S. Highway 218 overpass.

In Cedar Falls, snow removal in the College Hill and downtown runs from 8 tonight until 6 a.m. Wednesday. The 48-hour parking ordinance is in effect. Beginning at 7 a.m. Thursday, Cedar Falls Police will begin ticketing all vehicles in violation of the 48-hour ordinance. Any vehicle not moved within 24 hours after receiving the citation will be towed at the owner’s expense.

Waterloo and Cedar Falls plow drivers were able to clear streets by Monday afternoon but were expecting to be fighting drifting and cold temperatures over the coming days.

“So far we’re winning the battle and everything’s going good,” said Tony Pauley, operations supervisor at the Waterloo Street Department. “We are having some drifting trouble in the outlying areas.”

“With the wind, we’ll have some staff on call for drift patrol,” said Brian Heath, manager of the Cedar Falls Public Works and Parks Division.

The extremely cold wind chills could cause some delays.

“I’m not going to put my guys in jeopardy with that dangerous cold weather,” Heath said. “What they’re talking about is scary cold.”

“When it’s that cold the hydraulic lines freeze up,” she said. “Unless there’s an emergency and we get called in by the sheriff, we probably won’t be out, which could make things difficult on the gravel roads.”

County motor graders were expected to be out today until 5 p.m. to keep roads open.

“It is drifting pretty good out in the county,” Nicholas said.

WATERLOO -- The entire state of Iowa, as well as large swaths of the Midwest, remains under a wind chill warning as dangerously -- and almost …

WATERLOO — With more than a week of classes to make up due to cold and snowy weather, Waterloo Community Schools is slightly adjusting its cal…

Bryan Vaughn, right, and Rick Milks clear snow from the front steps of Queen of Peace Church on Mulberry Street in Waterloo Monday.

A man makes his way down East Park Avenue in bitter cold Monday.

A frosty Cedar River near the First Street Bridge in Cedar Falls on Monday.

The area in pink is under a winter weather warning.