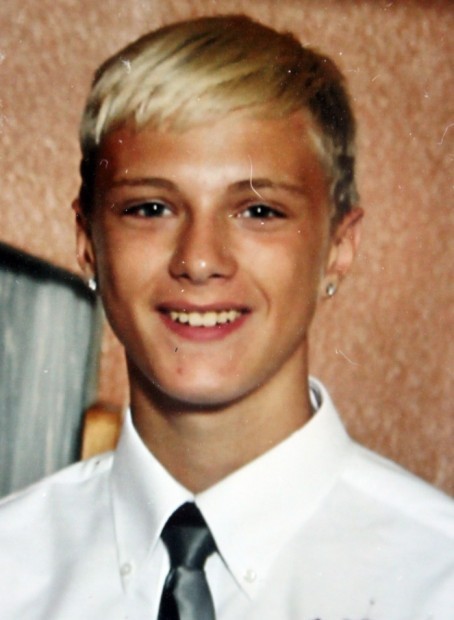 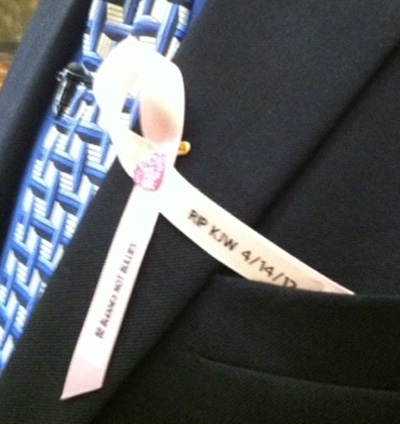 A ribbon handed out by members of No Bully Iowa references the suicide of Kenneth Weishuhn, a 14-year-old who killed himself last week.(Courtesy Photo) 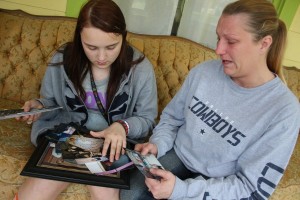 Kayla Weishuhn, 16, and her mom, Jeannie Chambers, of Primghar, Iowa, look at photos of Kenneth Weishuhn, 14, who died Saturday. His family says bullying pushed him to commit suicide. (Journal photo by Laura Wehde)

PRIMGHAR, Iowa --- Jeannie Chambers broke down briefly on a recent shopping trip with daughter, Kayla Weishuhn. Kayla caught Mom looking for clothes in a different section of the store.

"I looked for clothes for K.J.," Chambers says.

K.J. is Kenneth James Weishuhn Jr., the 14-year-old son she lost on April 14 when he committed suicide at their residence in Primghar.

Police interviewed at least 16 teens in a follow-up investigation, but charged no one in connection with K.J.'s death, a death family members contend may have been avoided were it not for the bullying behavior of a faction of youths at South O'Brien High School, where K.J. was a freshman.

A month earlier, K.J. told people he was gay, a revelation that led to verbal slurs at school and negative posts on Facebook and texts to his cellphone. The tragedy of his death coincided with the national release of a documentary called "Bully," parts of which were filmed in Sioux City schools.

In the months following his death, Weishuhn's mother worked, grieved, reflected and survived. She didn't eat immediately after his death. Only after his burial did she seek nourishment.

"I have to survive for my daughter, my family," says Chambers, 38.

Officials at South O'Brien High reacted by offering seminars on bullying prevention and calling in grief counselors and local pastors to discuss the issue with students.

Security cameras have since been installed at the school, according to Kayla Weishuhn, 17, who starts her junior year at the school on Tuesday.

Students created a slogan touted on the school's website and elsewhere in the community: "Coming Together As One: We Are South O'Brien."

"People asked me if I would transfer to another school," Kayla Weishuhn says. "I said, 'No. South O'Brien is a good school.'"

"I am OK with school administrators," Chambers says. "You cannot see everything that's going on with these kids all the time. I know they couldn't see what was bothering K.J. They said, 'He always smiled.'

When K.J. came to his mother last winter and told her he was gay, she said that was OK. She realizes now she should have monitored his Facebook account and cell phone for disturbing or threatening messages.

She also admits she made mistakes along the way. She missed a portion of her son's formative years while serving a federal prison sentence after pleading guilty to conspiracy to manufacture and distribute methamphetamine. A rehabilitation program she participates in has helped reinforce family values she needs as a mother.

"K.J. and Kayla and I were always close," she says. "We'd sit and talk. It helps me now to talk about this."

Returning from prison 18 months ago, Chambers sat with her children and apologized for shaming them. Kayla, her mother says, looked up and said, "You came back a better mom."

Being sober, prayerful and committed to work, her husband and her daughter remain rocks Chambers builds upon. She won't forget that her son was taunted, but she won't wallow in it either. She knows others have forgiven her for past sins.

"I've been in trouble, but I'm a Christian," she says. "You need to forgive."

Parents must also recognize what's happening with their children, she adds. Chambers would like to advise parents and children on the pitfalls of bad behavior, be it drug abuse, bullying or the misuse of technology.

"I tried to stay off their Facebook," Chambers says, "but my sister-in-law said I needed to get on (it). I do pursue it now, even to the point where I'm over-protective."

She asks that others allow children the opportunity to express themselves as they grow. "Kids must be who they want to be," she says. "That's a major thing as a child."

She and Kayla participate in a group called "Be Buddies Not Bullies" that meets twice each month at a church in nearby Spencer. The group, which takes its name from a favorite quote of K.J.'s, conducted a candlelight vigil in K.J.'s memory at Primghar City Park during the South O'Brien County Fair. Members released balloons that night during the fair's popular Figure 8 races.

As a new school year dawns, Chambers readies her daughter for the academic year. The two talk about the future. Kayla hopes to study psychiatry and live with her father in Arizona. Chambers plans to one day share stories about her failures and successes, taking strength from and building upon the memory of her son.

"I know K.J. doesn't want us to be sad," Chambers says. "He wants us to talk to other kids, to help other kids."

UPDATE: No criminal charges in death of bullied Iowa teen

PRIMGHAR, Iowa --- No criminal charges are expected to filed in the case of Kenneth Weishuhn, a Primghar, Iowa, teen who family members say co…

PRIMGHAR, Iowa --- As nearly 300 people mourned the loss of a 14-year-old South O'Brien High School student who took his own life, the ministe…

A ribbon handed out by members of No Bully Iowa references the suicide of Kenneth Weishuhn, a 14-year-old who killed himself last week.(Courtesy Photo)

Kayla Weishuhn, 16, and her mom, Jeannie Chambers, of Primghar, Iowa, look at photos of Kenneth Weishuhn, 14, who died Saturday. His family says bullying pushed him to commit suicide. (Journal photo by Laura Wehde)