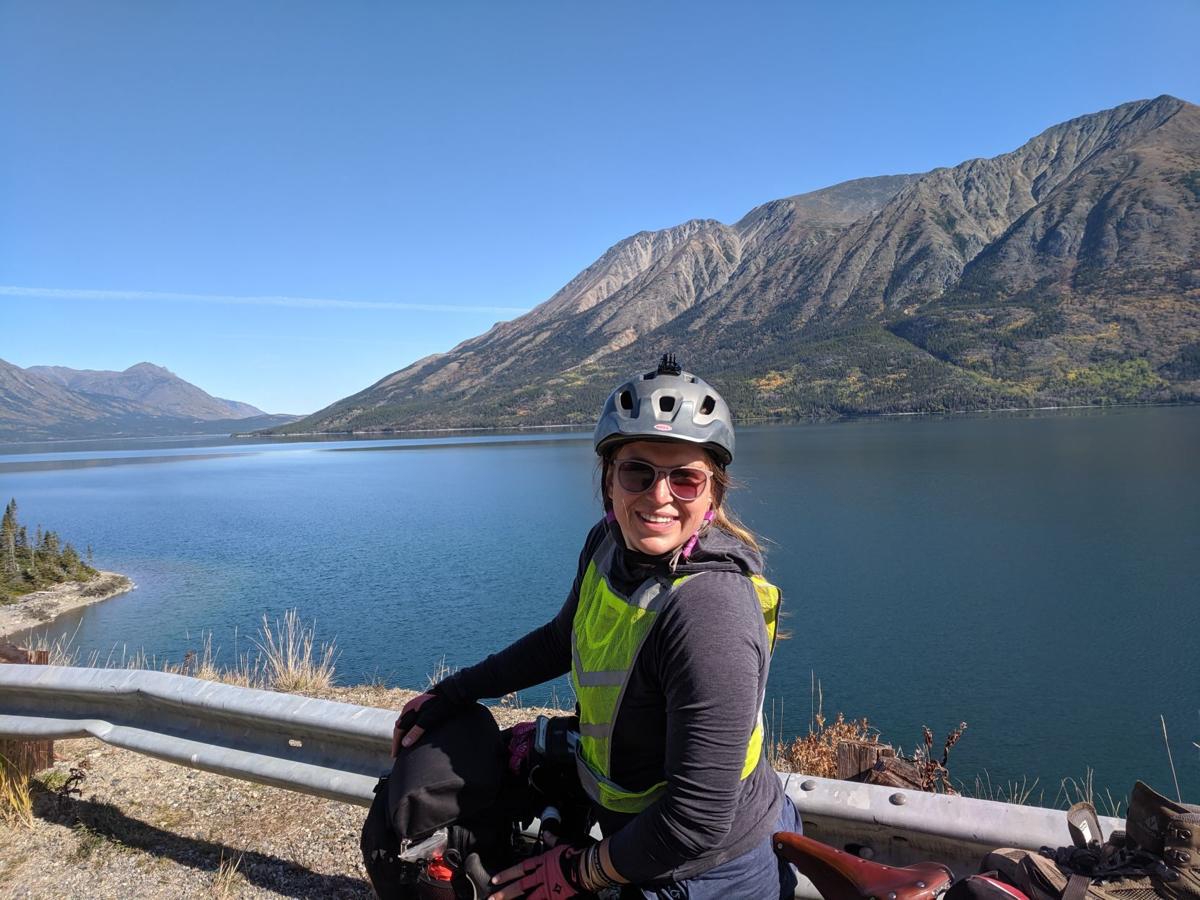 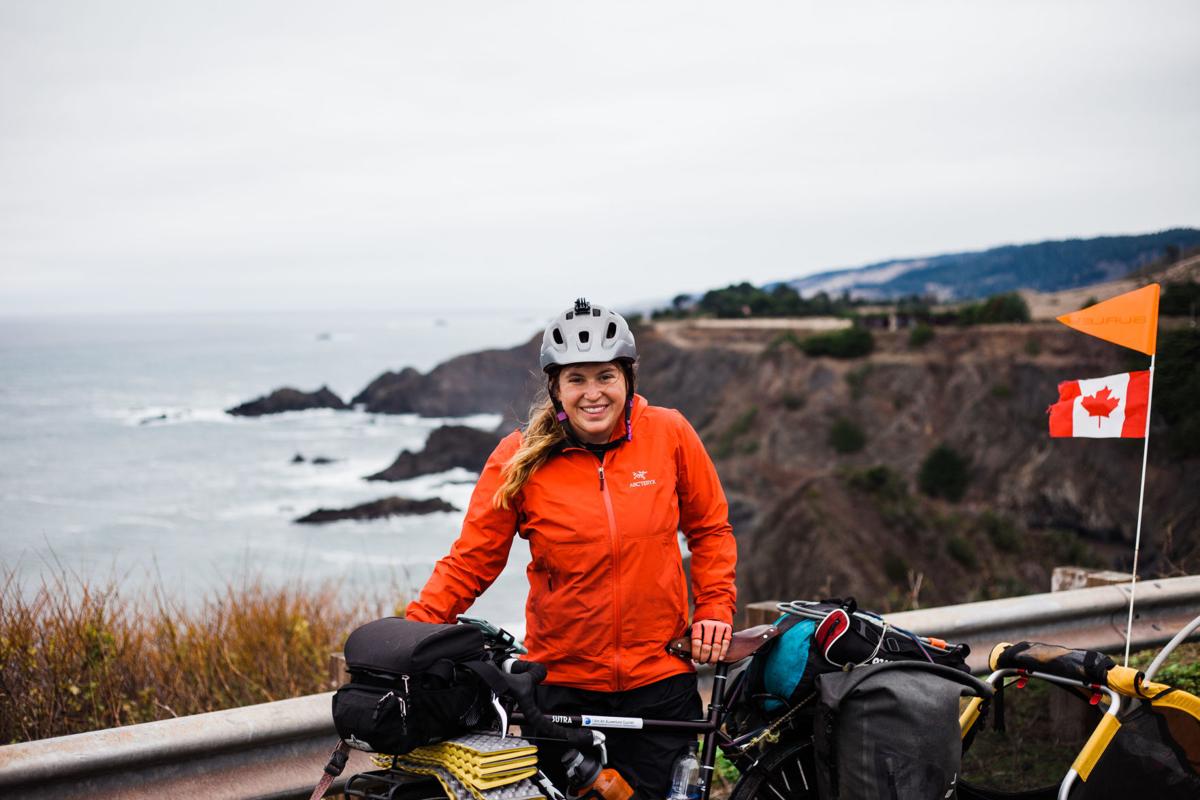 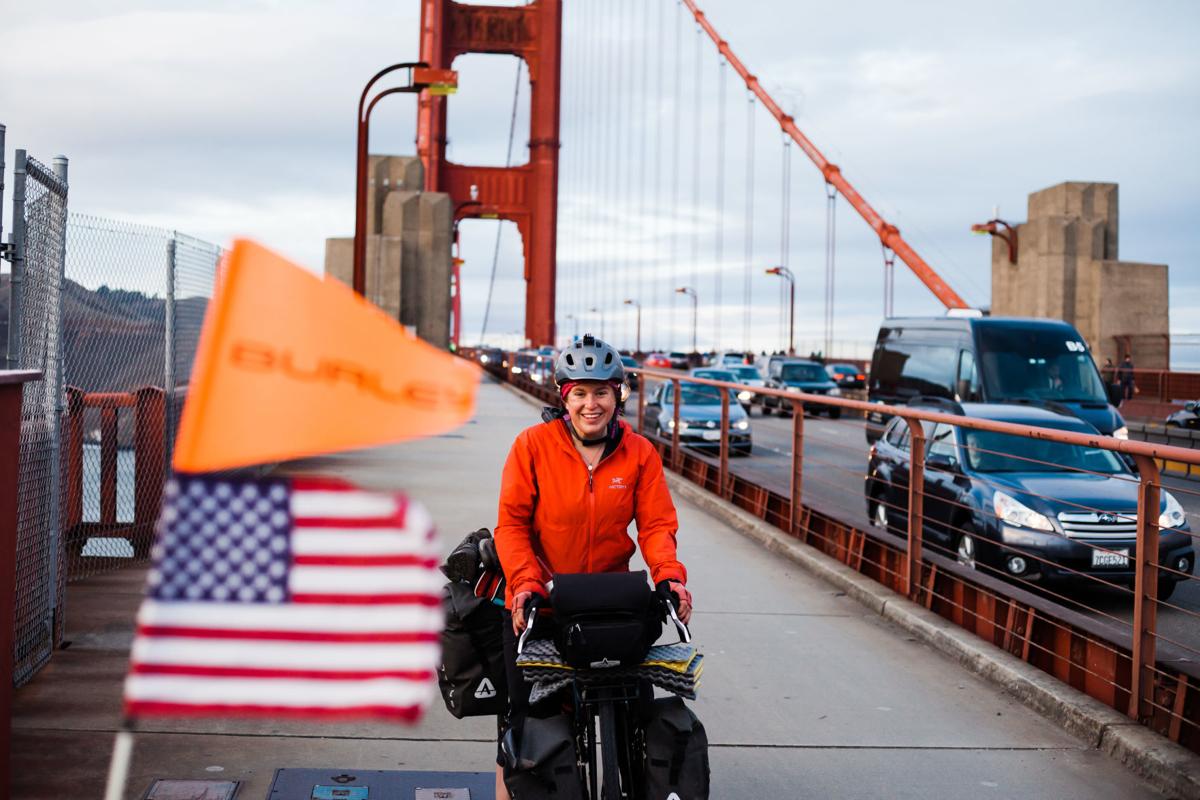 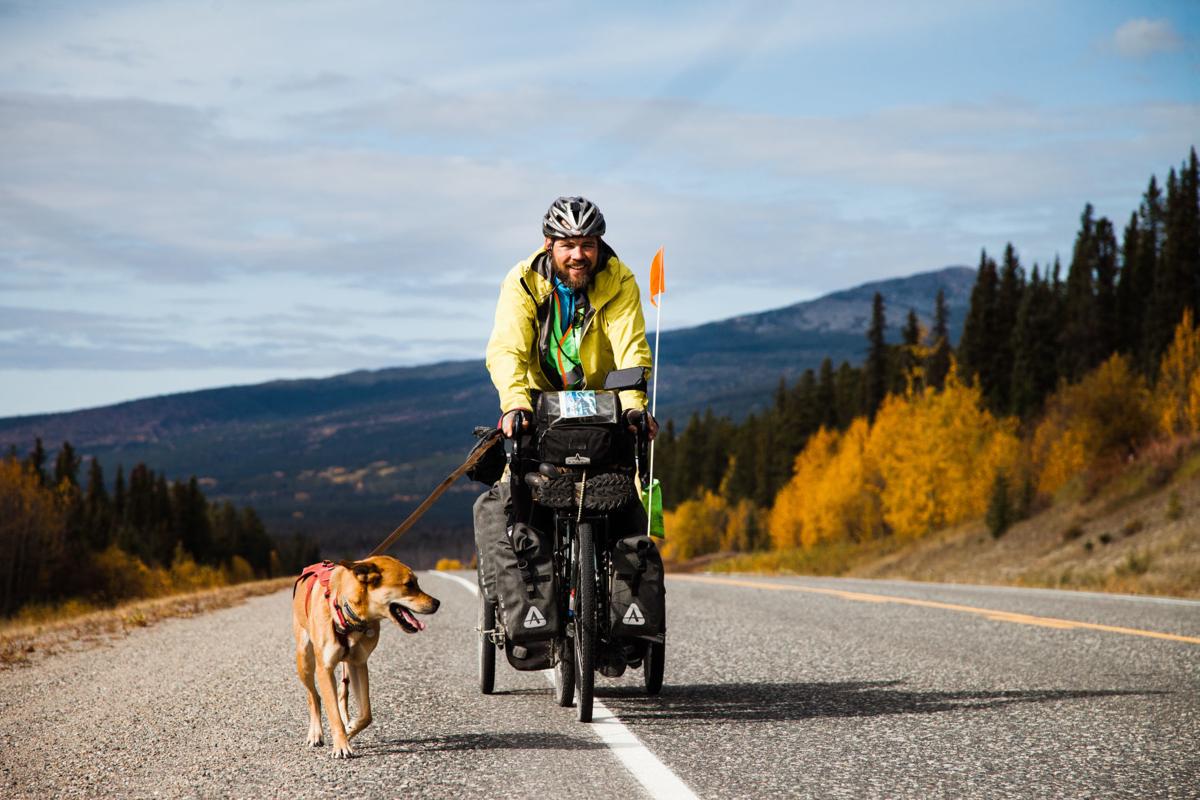 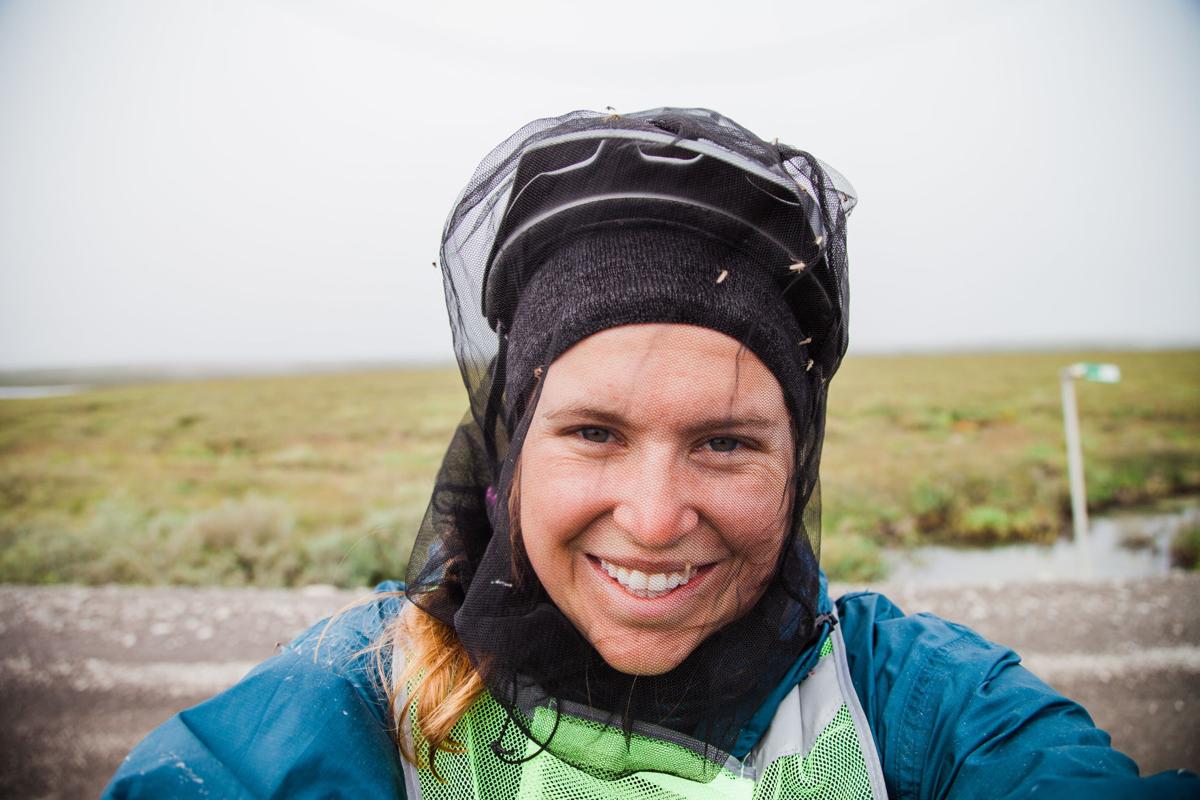 Linden Terpstra stops for a break on the Alaska leg of her continental bicycle journey. 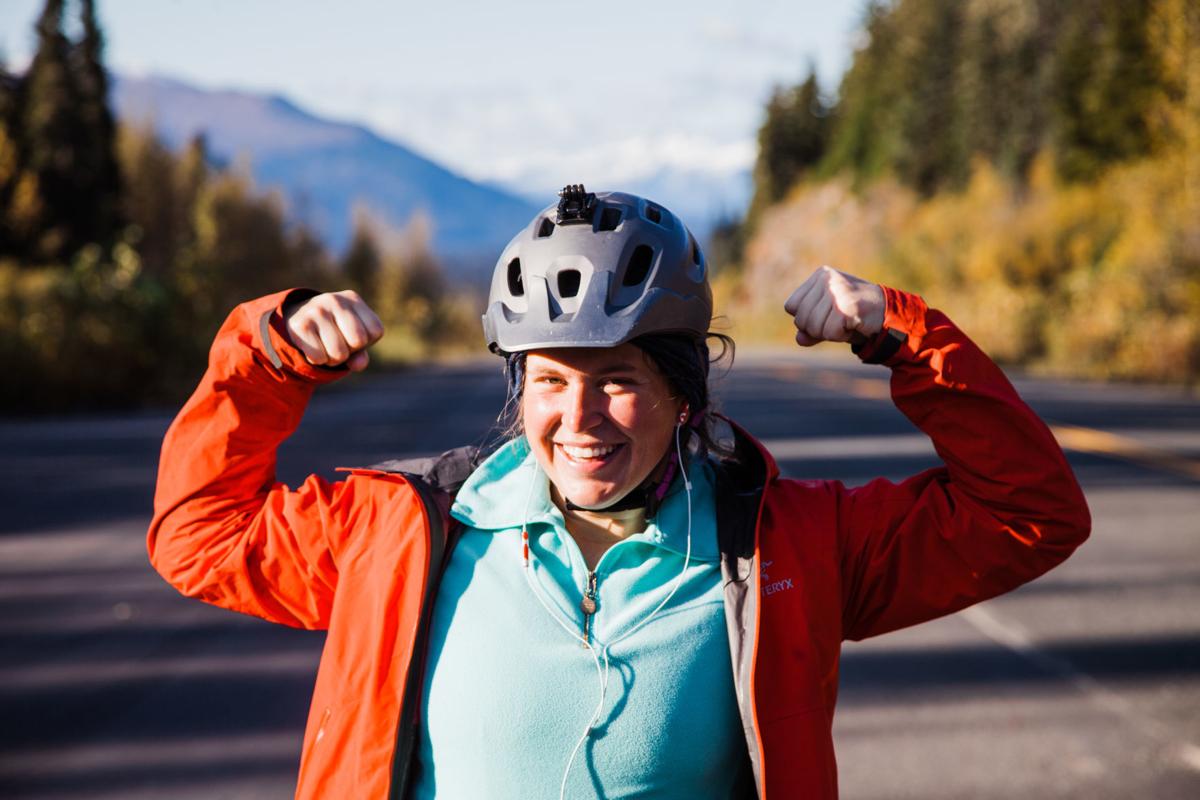 Cedar Falls native Linden Terpstra is all smiles as she rides through Alaska on a 14,000-mile bicycle triop from Alaska to Argentina.

CEDAR FALLS – When Linden Terpstra and Jake Deal decided to embark on a two-year, 14,000-mile bike ride from Alaska to Argentina, they knew they would encounter difficulties.

Since the start of their journey last spring, they’ve had numerous bumps in the road, from flat tires and broken bicycle parts to gale-force winds and even an encounter with a bear.

But nothing could have prepared them for the screeching halt of a global pandemic.

“I don’t think anyone could have planned for this,” said Terpstra, a Cedar Falls native.

In March, Terpstra, Linden and their rescue pup Mabel were pedaling through remote coastal areas of Mexico. For four days they had no cell phone service. They were in for a shock when they rolled into the city of Loreto, Mexico.

“Our cell phones blew up with the news that the NCAA tournament, NBA, MLB, and NHL had all been canceled, borders were closing throughout the world, and swaths of New York and California residents were being isolated already. … In what felt like the blink of an eye, everything had changed,” Deal wrote on www.3boondogglers.com, a blog chronicling the trio’s journey.

The couple quickly calculated the risks and hopped back on their bikes. They rode 220 miles south to La Paz, the capital of Baja California Sur, a Mexican state on the Baja California Peninsula.

“That’s when things started getting really serious,” Deal said. “We tried to rush there as fast as we could. It’s a bigger city with more hospitals and more resources. There’s a bigger airport and more ways to get home if we decided to do that.”

Terpstra, 28, graduated from Iowa State University and until last spring worked as a mechanical engineer. Deal, 34, is a Minnesota native who worked in finance. The pair began their Boondoggler trek in May, trading their comfy digs for a temporary life on wheels. The Courier wrote about their epic adventure in January when they’d reached California.

They’re now sheltering-in-place in La Paz, their bikes on temporary furlough. They’ve rented an apartment for the next month.

Ultimately, they decided going home to Iowa or Minnesota was too risky, not only for themselves but for their families.

“We did weigh it, Terpstra said. “If we got on an airplane there’s a high probability of potentially catching the virus on the plane. And when we got home, we’d be putting our parents and grandparents at risk. It’s better for them and their health if we stay away.”

There are worse places to be stranded, she said. Though the beaches and restaurants are closed, sunshine is plentiful and the living is easy.

“It’s been amazing,” Terpstra said. “The people here are so friendly, always smiling and waving at us. We’ve had a really good time.”

The couple are trying to stay busy, taking Mabel on daily runs and fetching groceries from local markets. They’re also working on their Spanish.

Like the rest of the world, Terpstra and Deal are waiting it out. They don’t know yet whether they’ll continue their journey on wheels or if they’ll call it quits and return to the U.S.

“It’s still a big question,” Deal said. “The current plan is to wait here to see if the travel restrictions are lifted at the end of April. We’ll definitely stay until the end of the month, maybe through May.”

“There’s some anxiety not knowing. We’re in that boat too,” Terpstra said. “Jake keeps saying we’re at the ‘Hotel Baja California’ – you can check out anytime you like but you can never leave.”

A Cedar Falls native, her boyfriend and their dog have embarked on a journey they've dreamed of for years -- biking from Deadhorse, Alaska, to the southernmost tip of Argentina.

As the number of COVID-19 cases skyrockets and the death toll mounts, people who rely on in-home health care workers for help with activities of daily living grow increasingly anxious about becoming infected.

"Our incident command center has been in the process for weeks for all the what-ifs. We are preparing for a surge we hope doesn’t happen.”

Farmers State Bank is an approved Small Business Association lender and is participating in the Paycheck Protection Program.

QC Plastics has produced thousands of face shields so far with the help of the community, and is planning to do more.

A new high of 125 new cases of coronavirus were announced Thursday, along with 2 deaths in Linn County.

MidAmerican Energy has announced it is donating a half-million dollars to local COVID-19 relief efforts throughout its service area.

From fear of contracting the virus to anxiety and depression over the economic fallout, the nation is on edge.

People ponder ways to give back

Right now, I don't need a stimulus check. Since I'll get one anyway, what can I do with it to help during this pandemic?

Perimenopause can last months to years

In some instances, the changes associated with perimenopause can take place over the course of a decade.

I'm afraid my ex will catch the virus and give it to my son, who will pass it to me. I've tried talking to him about this, but he is not receptive. I don't know what to do.

The Final Thursday Reading Series returns in an online format this month, bringing poet Jim Johnson to a screen right in front of you.

University of Iowa Health Care Tuesday received a $2 million donation to help with the most urgent needs in fighting the COVID-19 pandemic.

Hospitals reach out to at-risk patients

During a phone conversation with a nurse, a MercyOne patient revealed she was in jeopardy of running out of her medications. Normally the patient would pick up her medications from a local pharmacy, but the COVID-19 pandemic changed that.

UnityPoint Clinic has transitioned part of its family medicine clinic in Toledo to a respiratory illness clinic.

The agency is working on child abuse issues during the pandemic.

Calls are confidential and free. Individuals do not have to be on hospice service or a family member of a hospice patient to utilize this service.

Closing the church doors compelled leaders to find alternatives to provide worship services, prayer and outreach to their members.

The awards program recognizes outstanding volunteers in the Cedar Valley.

Linden Terpstra stops for a break on the Alaska leg of her continental bicycle journey.

Cedar Falls native Linden Terpstra is all smiles as she rides through Alaska on a 14,000-mile bicycle triop from Alaska to Argentina.