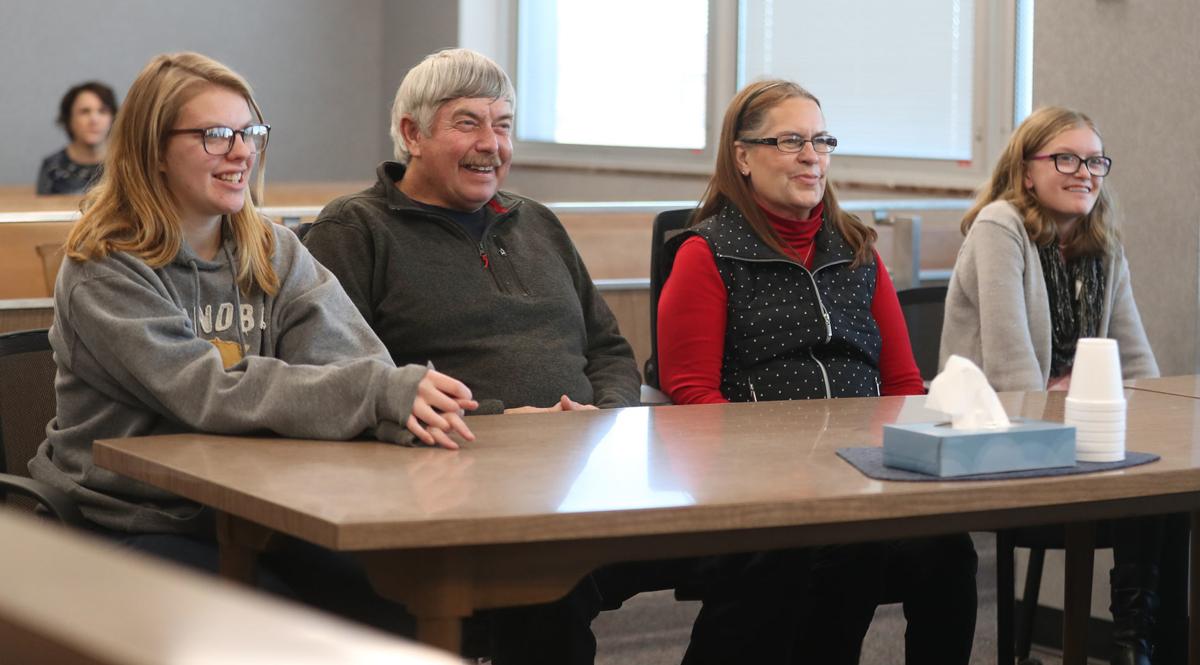 The Stinson family is all smiles as Richard and Kimberly's adoption of Elice, left, and Haley, right, becomes official. 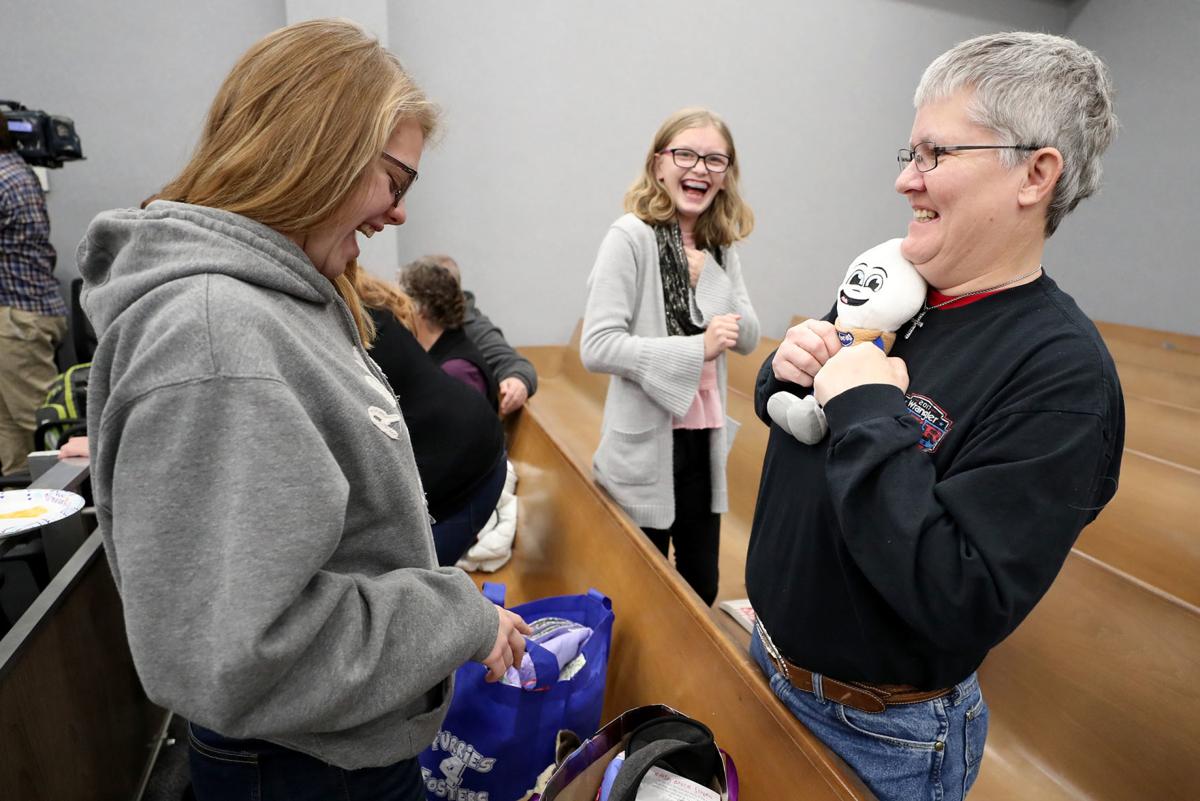 Elice, left, and Haley Stinson look through gift bags with Lisa Baker, sister of their newly adoptive mother, Kimberly, during National Adoption Day on Friday at the Black Hawk County Courthouse in Waterloo. 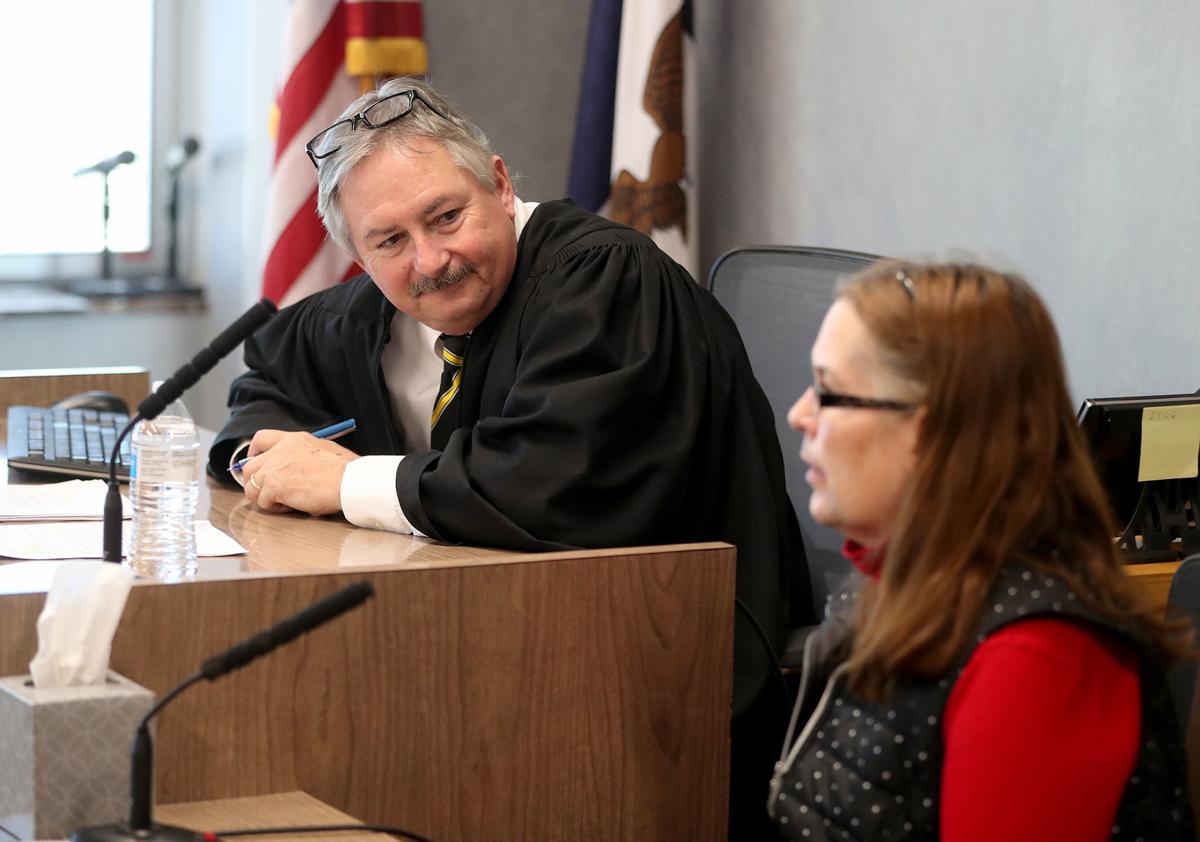 WATERLOO — After attorney Andrew Abbott had asked his client, Richard Stinson, all of his questions, Abbott did something unusual.

“I wanted to know if your wife wanted to ask you any questions,” Abbott said, turning his attention toward Stinson’s wife, Kimberly. “Do you want to ask him any questions?”

Kimberly Stinson shook her head, and the courtroom burst into laughter. Even Judge David Staudt, presiding over the courtroom on Friday afternoon, smiled.

The court proceeding was real and legal, but more informal than most: The Stinsons were officially adopting their granddaughters, Elice, 14, and Haley, 13, part of a group of 17 families adopting 26 children at the Black Hawk County Courthouse during National Adoption Day.

The Stinsons had been waiting for three years for the moment Judge Staudt approved the adoption, and the teens — who have already been living with them in Ridgeway — could legally be their own. They even took photos with Staudt to commemorate the occasion.

“We just love them a lot,” agreed Richard Stinson.

The normally somber third floor of the courthouse was bustling with happy activity Friday, with one courtroom serving as a holding area for families with trays of food, and smiling kids and their adoptive parents cycling through three other courtrooms for the better part of Friday afternoon.

“What’s so neat is the judges ask to be involved,” said Bambi Schrader, recruitment and training coordinator with Four Oaks Foster and Adoptive Family Connections. “They love these days where they can come and celebrate.”

November was designated as National Adoption Month to raise awareness about the approximately 4,000 kids in need of foster care in Iowa, said Schrader. Although the goal in the vast majority of cases is reunification with parents, around 1,000 of those children eventually will be adopted, the majority of those by their current foster parents, she said.

“Kinship care,” or being cared for by family other than parents, accounts for around half of all fostering, Schrader said. That includes aunts and uncles and grandparents like the Stinsons, and Schrader said she’s even helped a set of great-grandparents adopt their great-grandchild, giving up a winter home in order to accommodate the child’s schooling.

“It’s amazing the amount of sacrifice people make because children need them,” she said.

“Please, if you’re interested, make that call. Learn about becoming (a foster parent),” Schrader said. “We’re going to need you.”

To help others develop an ability to work with angels, Grillo has written “The Angel Experiment: A 21-Day Magical Adventure to Heal Your Life.”

Speak for children who can’t speak for themselves

If you have time in your life for a child, volunteer. You’ll be in the company of other ordinary people – teachers, nurses, managers, realtors, executives, accountants, sales associates, construction workers – who care about kids.

A Northeast Iowa social services worker has entered a guilty plea to perjury over her false testimony that helped convince a judge to remove four children from their parents.

Joe Biden’s presidential campaign picked up one of the biggest endorsements Iowa Democrats have to offer.

Businesses that choose to become financial partners will secure a guaranteed number of enrollments for employees’ children.

The Stinson family is all smiles as Richard and Kimberly's adoption of Elice, left, and Haley, right, becomes official.

Elice, left, and Haley Stinson look through gift bags with Lisa Baker, sister of their newly adoptive mother, Kimberly, during National Adoption Day on Friday at the Black Hawk County Courthouse in Waterloo.