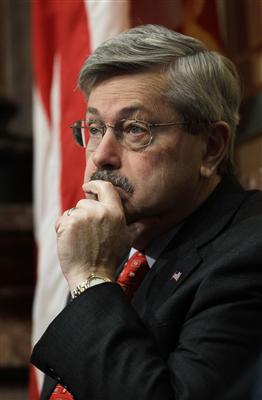 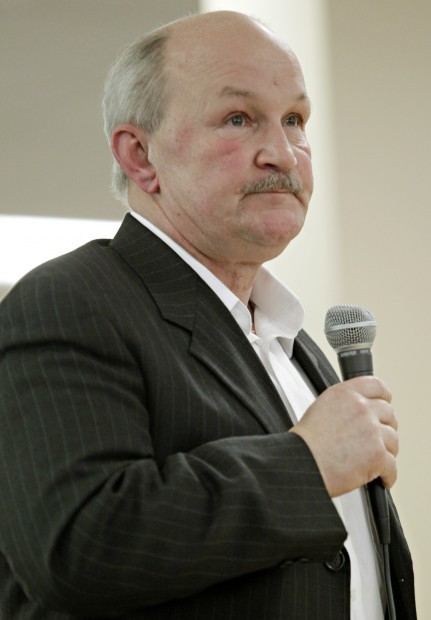 Sen. Bill Dotzler speaks to attendees during a community meeting called to discuss the future of Price Lab/Northern University School, with other local politicians in attendance, at the Community Center in Cedar Falls, Iowa on Sunday, Feb. 26, 2012. (DAWN J. SAGERT / Courier Staff Photographer)

DES MOINES, Iowa --- Gov. Terry Branstad contends an Iowa Supreme Court decision that called his use of a line-item veto “unconstitutional” may lead to the closure of more state offices and the layoff of 200 state workers.

Democrats said the governor’s statement, made through spokesman Tim Albrecht on Friday, was “a transparent act of retaliation” for losing the high-profile case. Officials in Branstad’s office announced Friday afternoon that they had filed a motion with the Supreme Court to stay the decision temporarily.

At issue was Branstad’s line-item veto of Senate File 517 last year. The governor eliminated language in the bill that required the state spend money to operate the same number of unemployment offices that were open at the time the bill passed.

But the governor used some of the money appropriated for the offices for other purposes. That led to a lawsuit by a group of Democratic lawmakers and American Federation of State, County and Municipal Employees Council 61 President Danny Homan.

“Simply stated, the legislature appropriated funds to (Iowa Workforce Development) with strings attached and our constitution does not permit the governor to cut the strings and spend the money differently,” Justice Thomas Waterman wrote in the 20-page opinion released Friday morning.

The ruling also invalidates the portion of the budget that deals with Iowa Workforce Development, effectively zeroing out the money allocated to run the office.

The Branstad camp shot back with a news release saying it disagreed with the ruling but would abide by it. The release also contained statements from Albrecht critical of Homan.

“What started as an attempt by Danny Homan to prevent the implementation of a new, streamlined service delivery system that has proven to serve Iowans even better has now, as a result of Homan’s lawsuit, put at risk all of the services our state provides to unemployed Iowans and hundreds of state workers’ jobs,” Albrecht said.

Homan said the attack “doesn’t surprise me” and said the lawsuit was about making sure the governor followed the Constitution.

“Since the day he announced his campaign and the day he took office, this governor has been attacking me and the union I represent,” Homan said. “It’s unfortunate he continues to do this.”

Homan said he would work with lawmakers and the governor’s office to find the money to keep the offices open.

Lawmakers from both parties shared a similar sentiment.

“I’m ready to meet anytime, anywhere to make sure underemployed and unemployed Iowans have the resources they need to find a good-paying job,” state Rep. Tyler Olson, D-Cedar Rapids, ranking member of the House Appropriations Committee, said in a statement. “Since the governor’s illegal actions have invalidated $20 million we approved for our skilled work force needs last year, we should work together to take quick action on behalf of the 90,000 Iowans still looking for work.”

“With the announcement of the Supreme Court decision today, we will carefully review the opinion and work with the governor’s office and our colleagues in the Senate to identify necessary next steps as it relates to the appropriations process and work force development,” he said.

Senate Democrats sent out a statement celebrating the decision and promising to work to keep the offices open.

“This is a huge victory for Iowans hoping to find a job,” said Waterloo Sen. Bill Dotzler, one of the plaintiffs in the case.

“It was a mistake to close dozens of local work force offices during a severe economic recession and when returning soldiers are looking for work,” another plaintiff, Sen. Daryl Beall of Fort Dodge, said in the same statement. “Let’s work together to fix that mistake.”

DES MOINES, Iowa --- Lawmakers on Monday must pass an emergency measure so the agency that serves jobless Iowans can operate after Gov. Terry …

Sen. Bill Dotzler speaks to attendees during a community meeting called to discuss the future of Price Lab/Northern University School, with other local politicians in attendance, at the Community Center in Cedar Falls, Iowa on Sunday, Feb. 26, 2012. (DAWN J. SAGERT / Courier Staff Photographer)