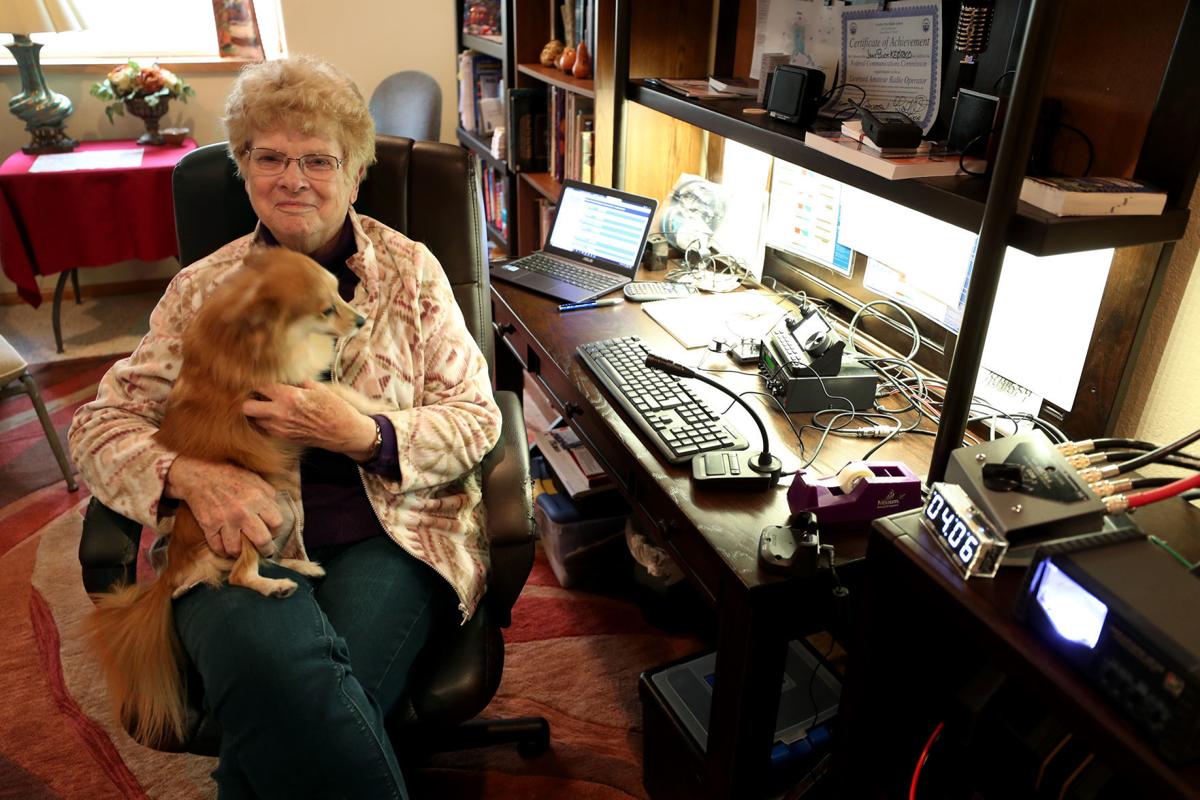 Jane Buck, holding her dog, Foxy, is 78 and just received her amateur radio license after passing the general and technician exams. 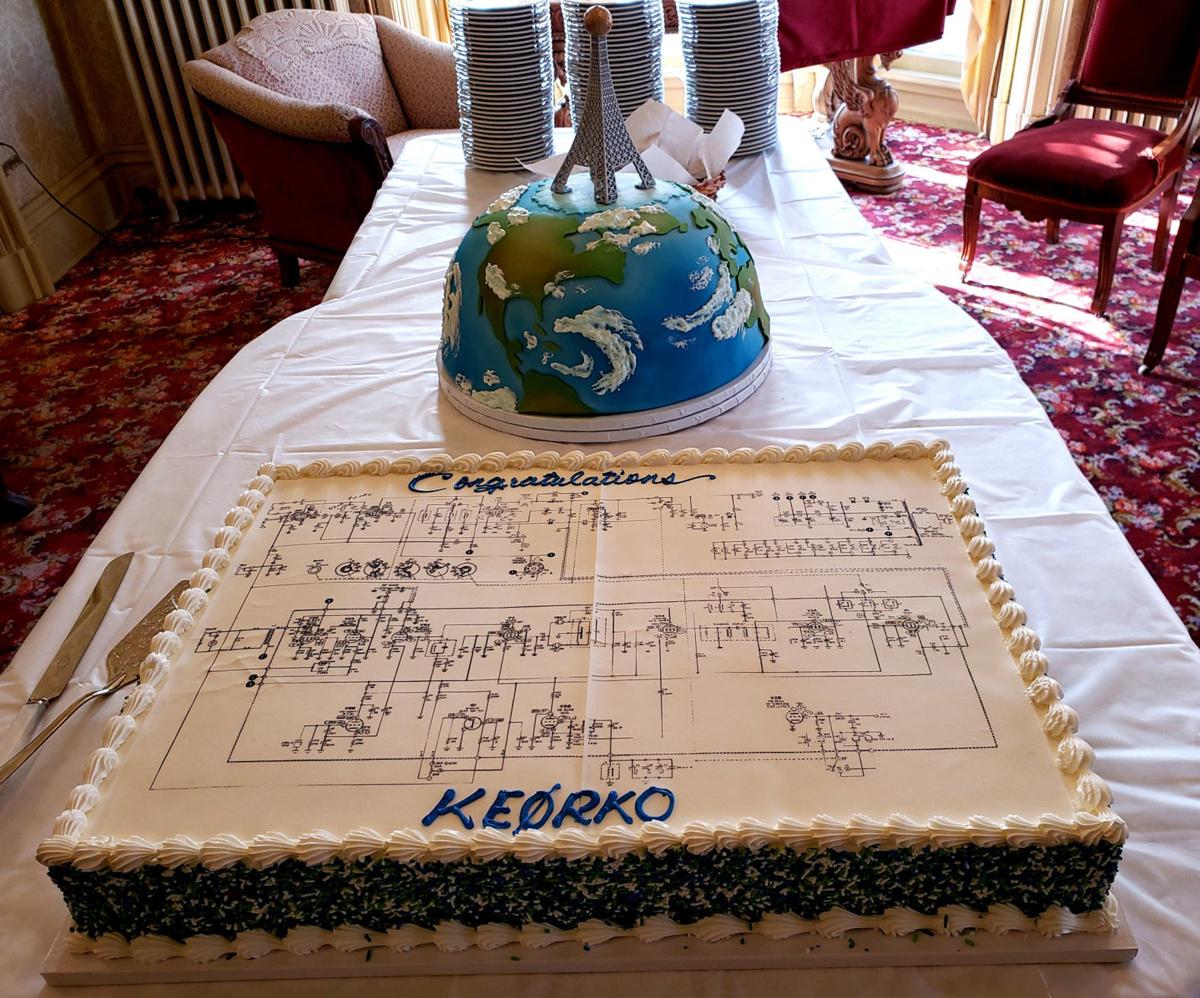 The sheet cake features a schematic of a radio transceiver and Jane Buck's new call sign as a ham radio operator. It was served at a party hosted by her son Wayne in honor of Buck's successfully earning her amateur radio license 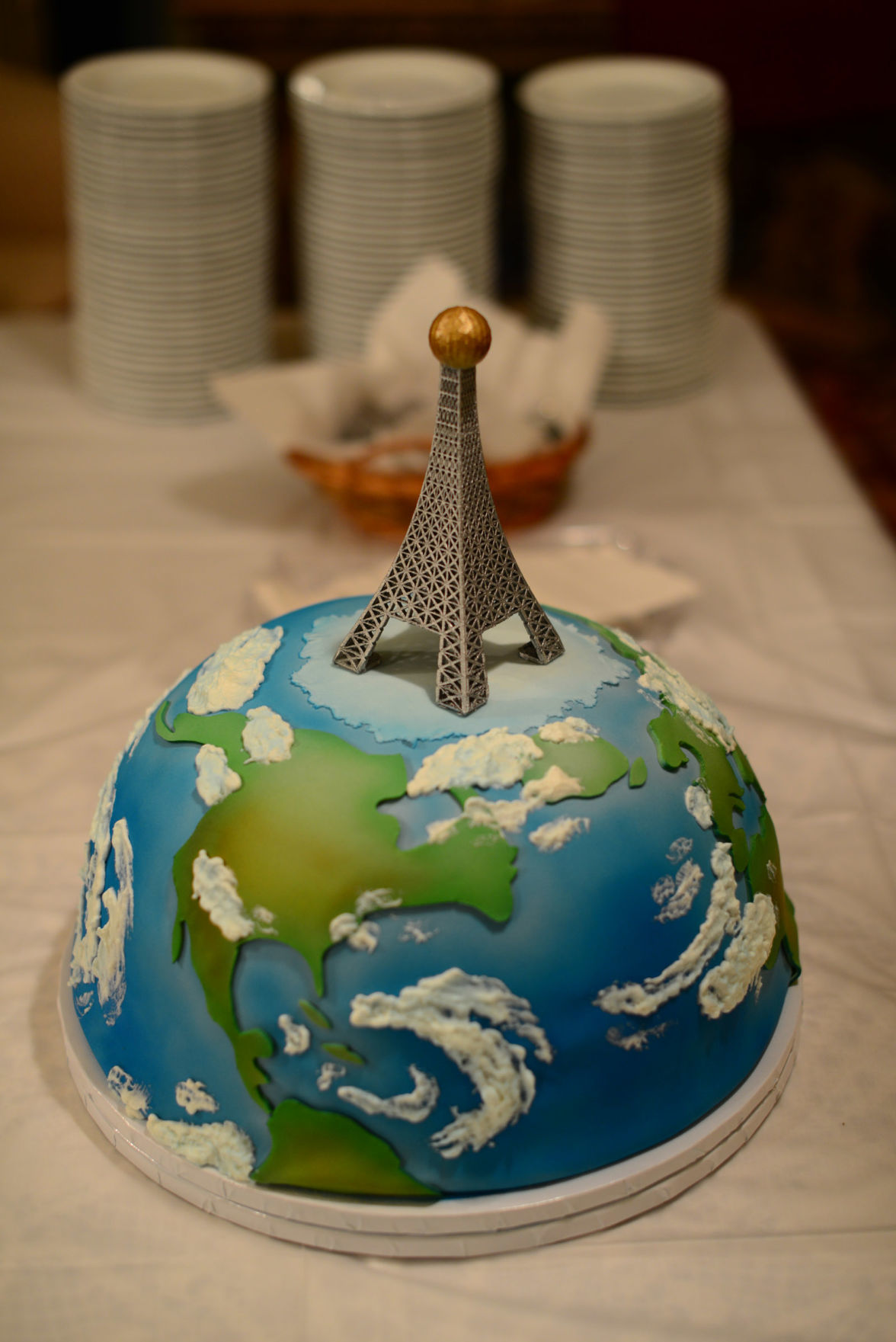 An RKO Pictures-style radio tower tops this cake "globe" as part of Jane Buck's celebration, hosted by her son Wayne in honor of Buck's successfully earning her amateur radio license at age 78.

CEDAR FALLS – At 78, Jane Buck is a gardener, a flower show judge — and a real ham. Just check out her new license plate — KE0RKO.

“It’s something I didn’t know I could achieve at this age. But I did it, and it’s opened a whole new world for me. It’s a new interest, and I’ve made lots of new friends,” said Jane, who lives in Cedar Falls.

This fall, she took classes and passed her general exam for an FCC license through the Northeast Iowa Amateur Radio Association in Cedar Falls. Receiving that license will allow her to communicate with operators around the world.

It took three tries to pass the difficult exam, she said.

She had easily passed the entry-level technician exam in April, attending classes on the basic theory, regulations, radio equipment and operation through the Buchanan County Amateur Radio Club.

She took six weeks of classes for the general exam and narrowly missed passing on her first two tries. “If I was going to pass, I knew I was going to have to really study, just like I was going to school. I studied two or three hours at night and three or four weeks later, did the test again and passed,” she recalls.

Jane also had an incentive: Her son, Wayne, promised to host a party if she passed the test.

In mid-November, about 80 friends and family members gathered at the Cedar Falls Woman’s Club to toast Jane’s success and cut into a pair of beautiful custom-designed cakes to celebrate her accomplishment. One cake featured a transceiver schematic and her call sign, and the other cake was a half-globe shape topped with an RKO Pictures-style radio tower.

Wayne, an amateur radio operator, had encouraged his mom to learn how to use the radio. He had learned firsthand the importance of having a reliable form of communication.

“I was living in Southern Louisiana during Hurricane Katrina. There were no cellphones, no TV, no computers or telephone land lines. We were cut off. We couldn’t communicate with the outside world, but amateur radio operators could. Radio was a way to call for assistance,” Wayne recalls.

That was all the motivation he needed to become an amateur radio operator. Now he lives 215 miles from his mom and decided it would be a worthwhile form of communication for her, if she was willing.

“You need to be able to communicate with people during any kind of emergency – weather or natural disaster, or in a power outage when regular forms of communication are disrupted,” Wayne explained.

Hams often work with public service agencies relaying messages during emergencies using voice, text, image and data communication modes. Operators can also send, receive and relay communications between computers or transceivers connected to virtual private networks on the internet, according to the ARRL, the national association for amateur radio.

Jane also enjoys the hobby’s social elements, forming friendships over the air waves, or simply signing on and listening in. Hams broadcast on UHF and VHF frequencies, and radio transceivers and other gear can be set up virtually anywhere, including the car. Wayne set up Jane’s transceiver and other gear in her lower level, as well as installing an exterior antenna and a radio in her car. Jane added the comfy chair. Her affectionate pomeranian mix dog, Foxy, is always in her lap while she’s talking on the radio.

“It gives me peace of mind that I’ll always be able to communicate with mom, no matter the circumstances,” Wayne said. “But it’s something you have to practice at so you get familiar with using the radio.”

So far, Jane hasn’t had a problem with finding time to practice. She’s joined both the Northeast Iowa Amateur Radio Association in Waterloo/Cedar Falls (www.wOmg.net), and the Buchanan County Amateur Radio Club (www.bcarc.net/).

“You’re never too old to learn something new. This has been an interesting experience for me, and I’d say it’s snowballed,” she added.

Frothy, delicate-looking but tough as nails, annual  'Diamond Snow' euphorbia is the latest addition to Proven Winners' 'Diamond Collection.' It is one of their trio of national annuals of the year for 2020.

A bedroom makeover by My Happy Haven has given a woman battling cancer a beautiful sanctuary for healing. Read about Cole Weliver's big reveal and the nonprofit that pulled it off.

Florist Krystal Weidemann shares her experience as a volunteer decorating for the holidays at Terrace Hill, the Iowa governor's mansion, which is celebrating its 150th anniversary in Des Moines.

'Tis the season for cheerful poinsettias for home decor and gifts. Here are some tips for choosing and caring for this classic Christmas flower, and how breeders continue to improve cultivars.

Five homeowners are opening their front doors for the Holiday Homes of Hope Tour on Sunday. RE/MAX Home Group and the American Cancer Society are partnering on the fundraising event.

The NWL Foundation is donating a total of $40,000 in baseball and softball equipment this spring.

Jane Buck, holding her dog, Foxy, is 78 and just received her amateur radio license after passing the general and technician exams.

The sheet cake features a schematic of a radio transceiver and Jane Buck's new call sign as a ham radio operator. It was served at a party hosted by her son Wayne in honor of Buck's successfully earning her amateur radio license

An RKO Pictures-style radio tower tops this cake "globe" as part of Jane Buck's celebration, hosted by her son Wayne in honor of Buck's successfully earning her amateur radio license at age 78.