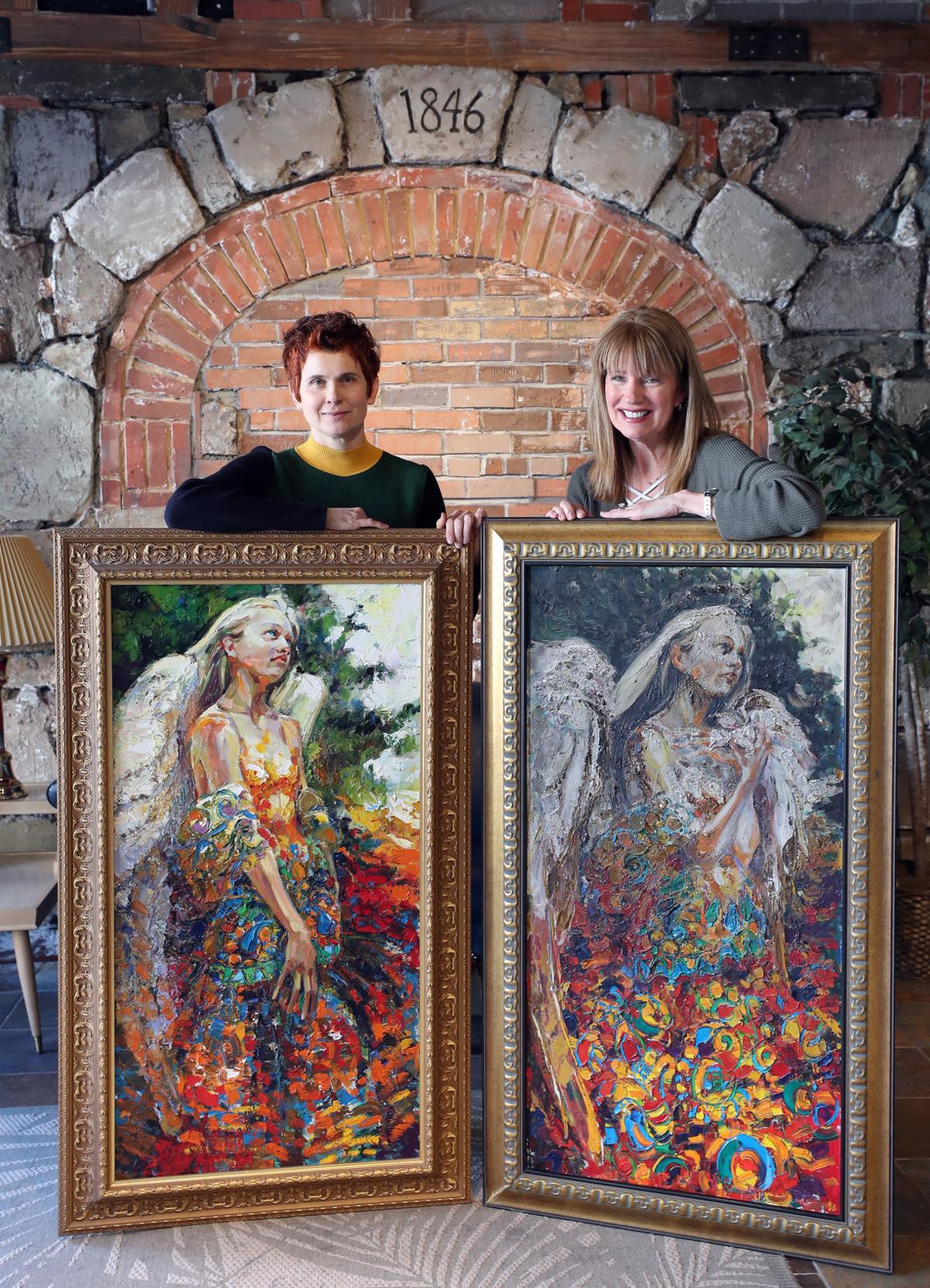 Artist Tatiana Ivaschenko Jackon, left, and her friend Amy Lockard shown in COR at 220 East with the 'Guardian Angels' paintings. 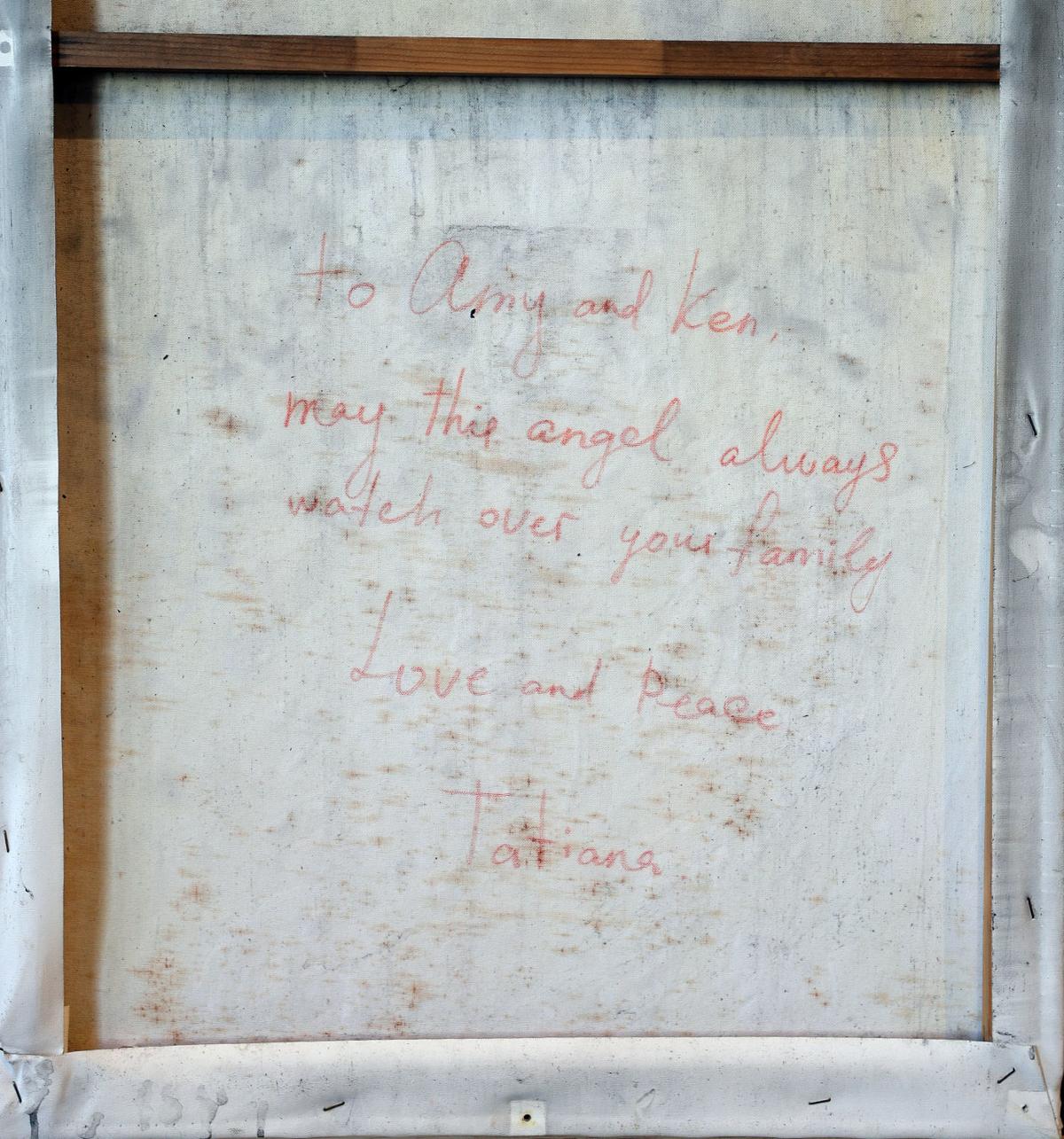 The inscription on the back of the Lockards' painting was a prayer from Jackson that the 'Guardian Angel' would protect their family. 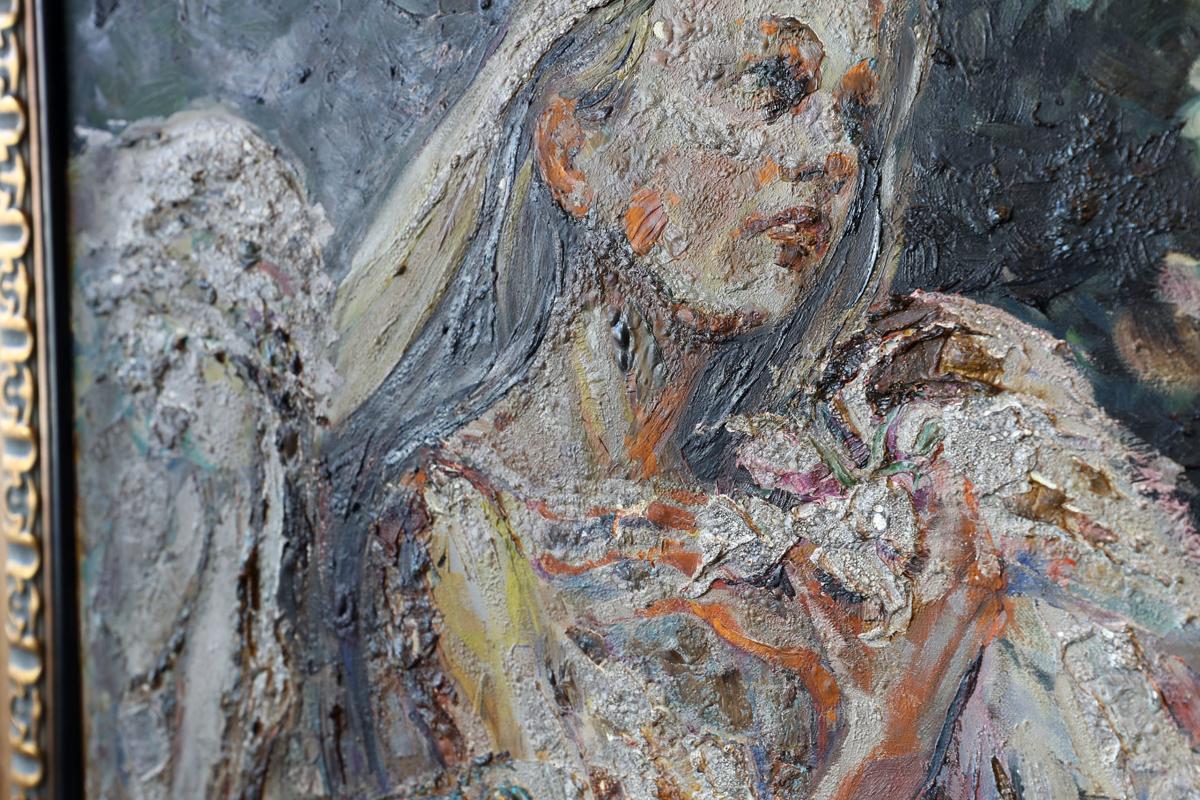 Bubbled paint and other damage from the fire shown on the Lockards' commissioned painting. It was the only item to survive a devastating fire that began on the main level of their rural Cedar Falls home, salvaged for the family by a firefighter. 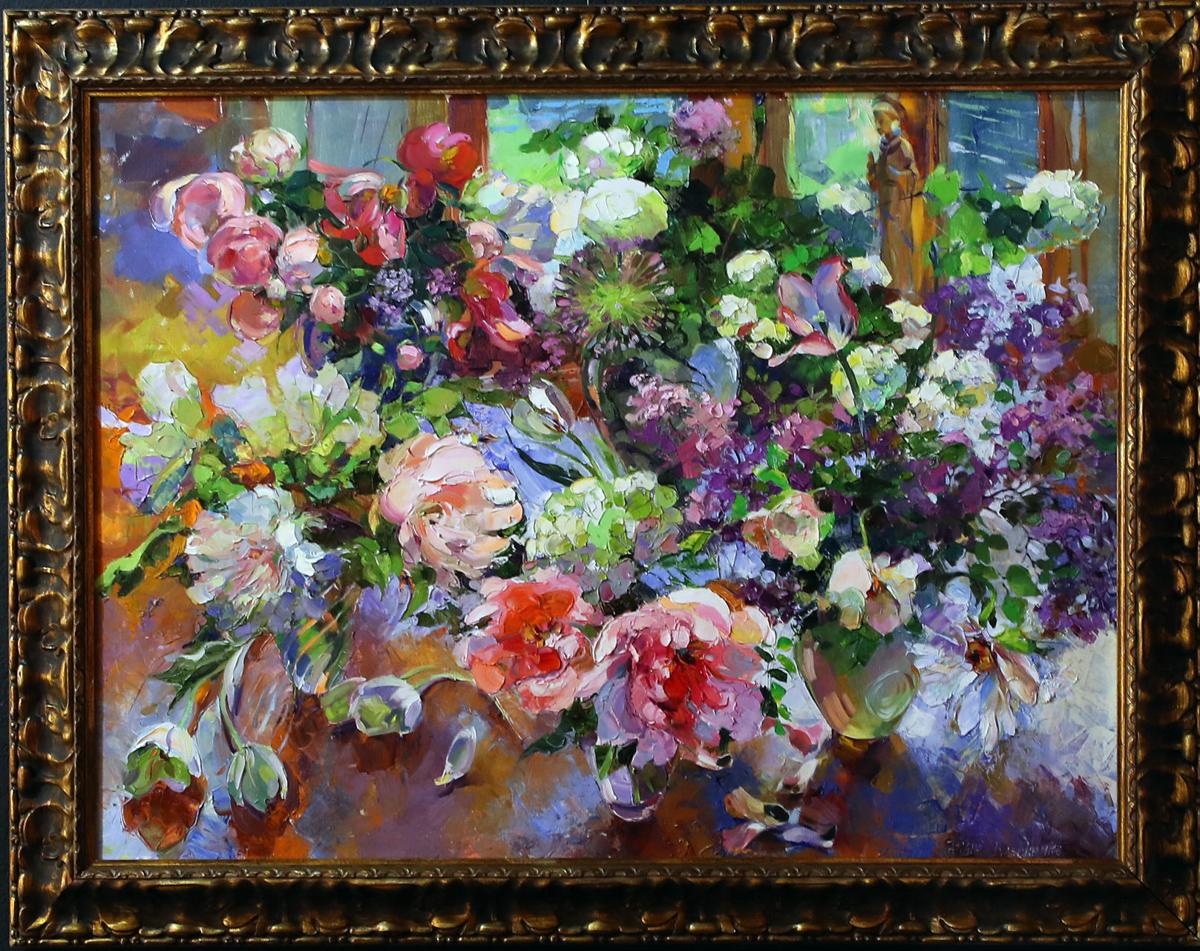 A floral impressionist painting by Tatiana Ivaschenko Jackon, one of more than 30 paintings that will be displayed in her solo show at COR at 220 East in Waterloo.

WATERLOO – Many people believe guardian angels are sent by God to watch over and protect them. Tatiana Ivaschenko Jackson captures the ethereal innocence of such an angel in her impressionistic painting, “Guardian Angel.” The color and details in the angel’s dress were inspired by cloisonné enameled Russian silver works, “easily recognizable in the thick impasto palette knife strokes,” Jackson said.

The Cedar Falls artist painted the angel 21 years ago after the birth of her first child. It remains one of her favorites, and family friends Amy and Ken Lockard commissioned Jackson to paint them their own “Guardian Angel.” When she completed the commission, Jackson wrote a short prayer on the back of the canvas: “May this angel always watch over your family.”

Both paintings will be displayed at Jackson’s solo show, “God is Love,” opening Friday with a reception in the gallery at COR at 220 East, 220 E. Fourth St. One painting is pristine; the other is scorched, covered in soot and bubbled-up paint, but the angel wasn’t destroyed.

On Nov. 22, the Lockards’ rural Cedar Falls home caught fire around 9 p.m. Their 19-year-old son, Michael, rescued a younger sibling and tried but was unable to reach his 32-year-old brother, who uses a wheelchair, trapped on the second floor. He entreated firefighters to rescue his brother, showing them how to access the staircase.

Cedar Falls Public Safety Officer John Zolondek couldn’t reach the second floor from inside the house because of the intense heat and smoke, so he climbed a ladder set up outside and entered the house through a window, carrying the man to safety. Later the firefighter re-entered the house and carried out the “Guardian Angel” painting.

“Thankfully, everyone in the family was safe,” Lockard said. The brothers were treated for smoke inhalation, and recently Michael’s rescue efforts were recognized with an American Red Cross award. The house was a total loss from fire, water and smoke damage.

She asked Jackson not to restore the painting. The Jacksons lived next door to the Lockards, and watched the firefighters battle the blaze. “She wants to keep the ‘Guardian Angel’ the way it is now as a symbol of gratitude for the many miracles and blessings we all witnessed,” Jackson explained.

The COR exhibit also will feature about 30 other paintings by Jackson, a native of the Ukrainian city of Odessa. She studied art history and technical drawing in St. Petersburg, Russia, and graduated with a master’s degree in painting from the University of Northern Iowa in 1995.

She chose the title “God is Love” because in a literal sense, the artwork speaks of the true love of God and humans’ ability to love. “Love begets love, and a gallery is common ground for people to view art and be open to different opinions and experiences,” Jackson said.

Jackson’s impressionist paint brush creates still lifes, portraits, landscapes and figurative compositions. “I don’t embellish or transform reality. My job as an artist is to recognize beauty and spill it onto a canvas.”

Although religious elements such as rosary beads, statues of saints and angels may be part of her compositions, Jackson described them as “beautiful artifacts that enrich the composition. What really is pointing to God is the brilliance of light and color that makes our mundane life beautiful.”

The public may attend.

The show will be on display for three months. Hours are 9 a.m. to noon Monday, Tuesday, Thursday and Friday and 9 a.m. to 1 p.m. Wednesday; closed Saturday and Sunday.

Major printmakers William Kentridge and Philip Chen share exhibition space for the first time in a striking new show at the  Hearst Center for the Arts in Cedar Falls.

Participants in Hawkeye Community College's 'learn and earn' Registered Apprenticeships are now certified nursing assistants who are continuing the program and working at Friendship Village.

The Last Dollar Scholarship at Hawkeye Community College covers up to 100 percent for tuition and mandatory fees for students in programs that lead to high-demand jobs.

North Iowa Tractor Ride to roll through the area in July

“The decision to step away from radio wasn’t an easy one," he says.

“Frog Prince of Spamalot” has been delighting children for more than 20 years. Black Hawk Children’s Theatre will present the show onstage at the Hope Martin Theatre beginning Friday.

An open rehearsal for the Waterloo Community Playhouse's "Church Basement Ladies" will take place in -- you guessed it -- a real church basement on March 2. It's free to attend.

Cedar Falls Historical Society's exhibit, “The Fight for the Right: Women and the Vote,” is open in Cedar Falls.

WATERLOO - Auditions are at 7 p.m. April 2 and 2 p.m. April 5 for the Waterloo Community Playhouse production of "The Book Club Play" by Karen…

Waterloo-Cedar Falls Symphony will honor its own at Saturday's concert

The Waterloo-Cedar Falls Symphony will honor musicians in the orchestra when it presents “Honoring Our Own” at 7 p.m. Saturday at the Gallagher Bluedorn Performing Arts Center.

ArtShare: Local student art to be on display at Veridian Credit Union

Teenagers can shop for a gently used prom dress for $20 Friday and Saturday at The Prom Closet. It's the 10th year for the pop-up store organized by Junior League of Waterloo-Cedar Falls.

The 2020-21 seasons for Waterloo Community Theatre and Black Hawk Children's Theatre will offer favorites with 'Sister Act,' 'Elf,' 'Our Town,' 'The Velveteen Rabbit' and 'Frozen Jr.'

He was born and raised in a refugee camp in eastern Nepal. It was there Subba first became intrigued with art as he watched older artists at the camp, whom he refers to as mentors, practice the art of lettering, also known as calligraphy.

Artist Tatiana Ivaschenko Jackon, left, and her friend Amy Lockard shown in COR at 220 East with the 'Guardian Angels' paintings.

The inscription on the back of the Lockards' painting was a prayer from Jackson that the 'Guardian Angel' would protect their family.

Bubbled paint and other damage from the fire shown on the Lockards' commissioned painting. It was the only item to survive a devastating fire that began on the main level of their rural Cedar Falls home, salvaged for the family by a firefighter.

A floral impressionist painting by Tatiana Ivaschenko Jackon, one of more than 30 paintings that will be displayed in her solo show at COR at 220 East in Waterloo.