Three large wind turbines near the Flint Hills ethanol plant near Fairbank are tied up in a zoning battle that has been appealed to the Iowa Supreme Court. 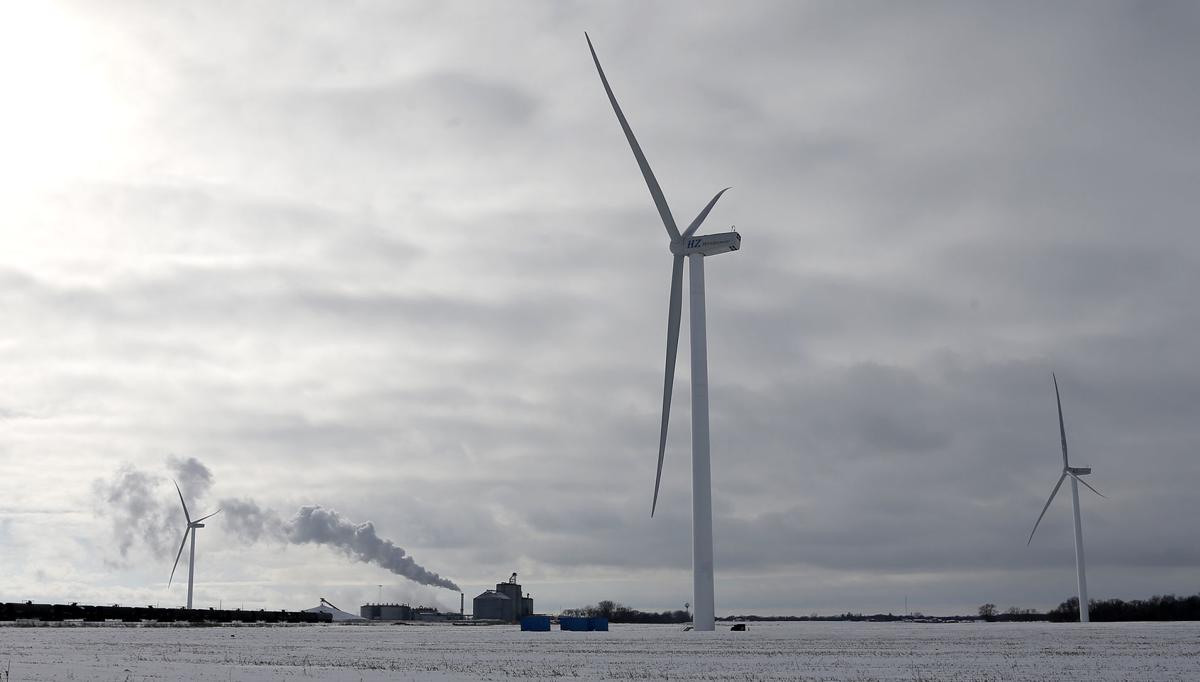 The three large wind turbines are near the Flint Hills ethanol plant near Fairbank.

FAIRBANK — The Iowa Supreme Court has been asked to intervene in an ongoing dispute over three wind energy towers in Fayette County.

Attorneys for Mason Wind and Optimum Renewables turned to the state’s high court this month after a district court judge deemed three turbines in a farm field just east of Fairbank are “illegal and void” and must be removed.

As Iowa’s wind energy industry gears up for a major expansion over the next three years, this high-stakes legal battle reveals wind farms aren’t always welcome, while some county zoning rules may not be ready for the test.

Mason Wind sought permission in Fayette, Buchanan and Black Hawk counties for three 445-foot turbines in 2015 before the $11 million project was built near the Flint Hills Resources ethanol plant.

But the county had previously approved a 16-turbine wind farm near Hawkeye for RPM Access under a special permit process through the county’s board of adjustment. The same process was followed for Mason Wind.

The project drew heavy opposition from neighboring property owners worried about property values and environmental impacts, while Fairbank City Council members voted to oppose the project just a half mile from the city limits.

The county board of adjustment sided with the opposition and rejected the special permits in early 2015.

Mason Wind found a new site a few miles south in Buchanan County but saw its rezoning request rejected by the county Board of Supervisors in August 2015. The firm moved west into Black Hawk County a few weeks later where its special permit was rejected by the board of adjustment.

The city of Fairbank and a local construction company filed a lawsuit in Fayette County District Court a month later claiming the zoning ruling was incorrect and asking for construction to halt until the issue was heard by the court.

The suit was filed against the board of adjustment, Miller, the board of supervisors, several companies involved in the wind project and property owners Thomas and Kimberly Rourke.

While the court initially stopped the work, the order was lifted after Mason Wind attorneys argued in court they understood the risk of proceeding while the suit was pending.

The turbines were already built by Aug. 24, 2016, when District Court Judge John Bauercamper presided over the trial.

“The question is whether or not a wind turbine that produces electricity is or is not an electrical transmission and regulating facility,” Bauercamper said.

In his Nov. 2, 2016, ruling calling the turbines illegal and void, Bauercamper said the structures were power generators, more like a coal-burning or nuclear plant and not transmission or regulating facilities.

But he added: “The court is fully aware that wind turbines are a valuable method for producing electric power, they are becoming common place on the Iowa landscape, and they can be installed in harmony with the environment and neighbors.”

Mason Wind filed its notice of appeal to the Iowa Supreme Court on Jan. 18 and does not have to remove the turbines pending the appeal.

Meanwhile, the Fayette County Board of Supervisors has changed its zoning ordinance to avoid similar issues in the future.

The new ordinance, among other things, requires any commercial wind energy project to get approval from the Board of Supervisors; to be at least three times the tower height or 1,500 feet from any occupied building; and does not allow construction within one mile of an incorporated city without that’s city’s written permission.

FAIRBANK — The Iowa Supreme Court has declined to hear an appeal from a wind energy company previously told to remove three turbines near Fairbank.

FAIRBANK — Three wind energy turbines deemed “illegal” by the courts are not coming down without a fight.

WEST UNION — Owners of three wind energy turbines near Fairbank were back in court this week fighting a court order to tear them down.

FAIRBANK — Joyce Kerns noticed a familiar sound when the large industrial wind turbine built near her backyard was shut down in July.

FAIRBANK | A Des Moines-based energy company has chosen a path of lesser resistance and will build a three-turbine wind farm near Fairbank.

Three large wind turbines near the Flint Hills ethanol plant near Fairbank are tied up in a zoning battle that has been appealed to the Iowa Supreme Court.

The three large wind turbines are near the Flint Hills ethanol plant near Fairbank.