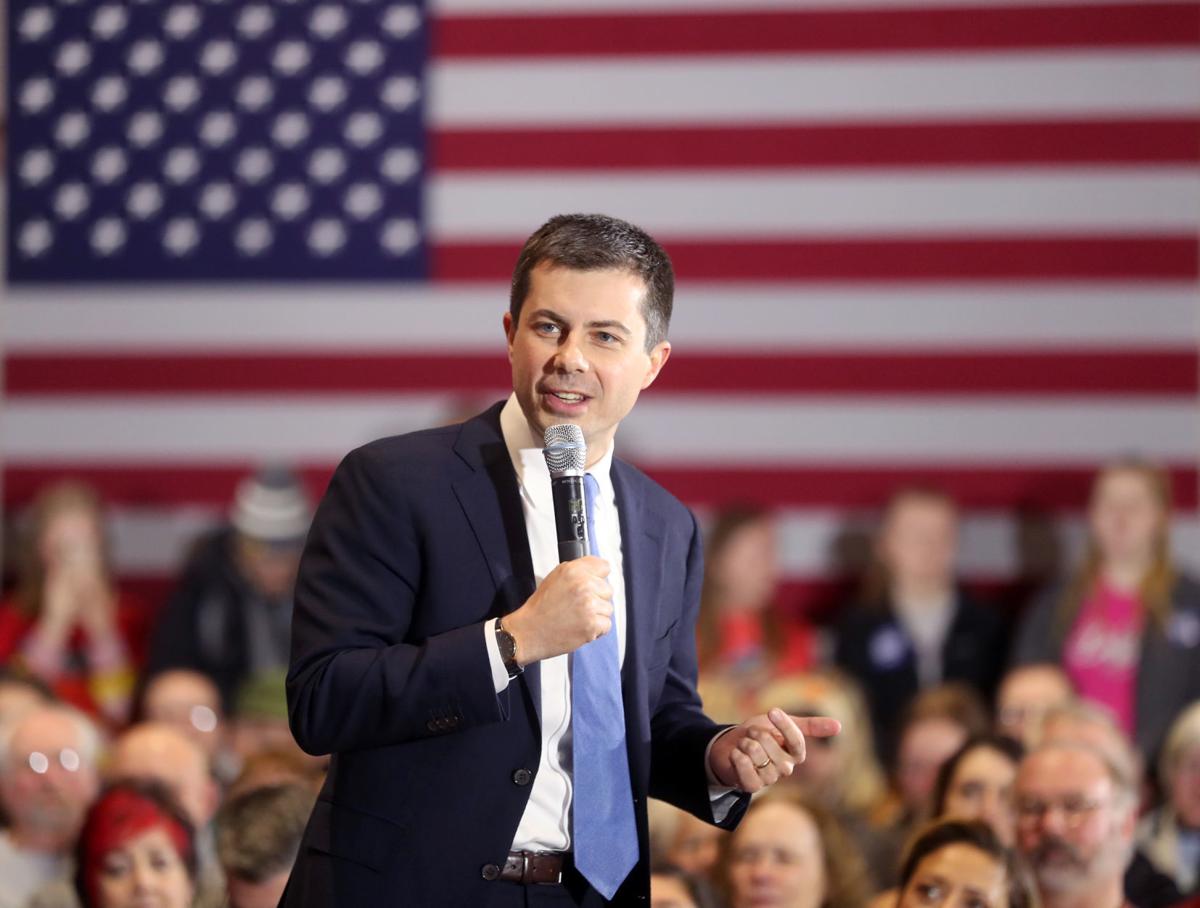 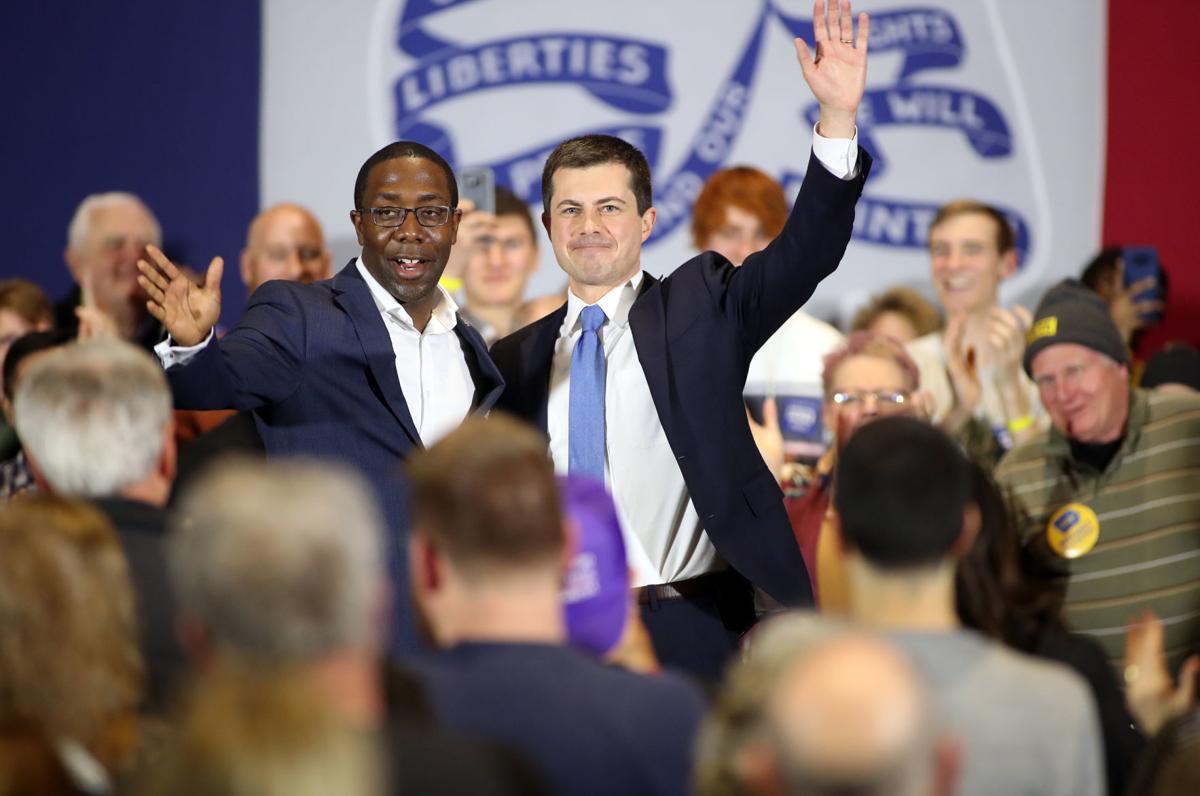 Waterloo Mayor Quentin Hart introduces Pete Buttigieg at a campaign event at Maucker Union on the UNI campus in Cedar Falls on Wednesday. 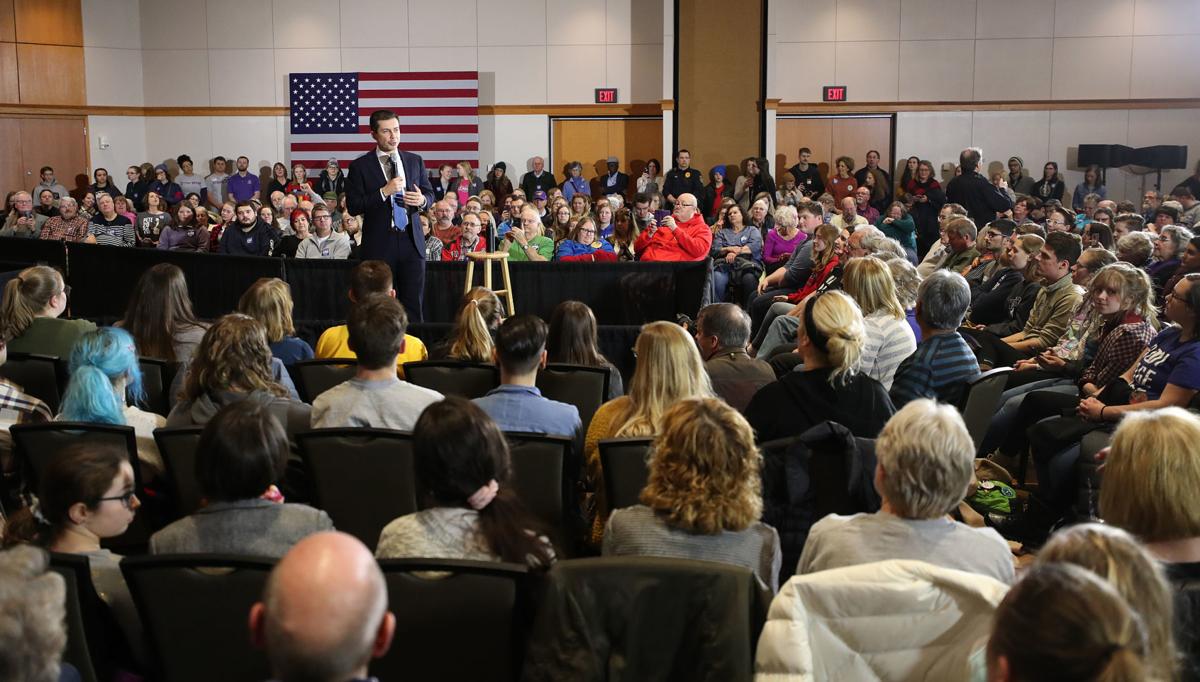 CEDAR FALLS — Mayor Quentin Hart met Mayor Pete Buttigieg a year and a half ago, before Buttigieg’s run for president, bonding over the similarities between their cities of Waterloo and South Bend, Indiana.

Noting “his intellect, his passion for his community,” Hart — who endorsed Buttigieg on Tuesday -- introduced him to more than 700 people inside Maucker Union on the University of Northern Iowa campus Wednesday afternoon.

“Our stories transcend,” Hart told the crowd. “We’re trying to recreate our communities.”

Buttigieg spoke for about 30 minutes to the overflow crowd, thanking former state Rep. Deb Berry, state Sen. Bill Dotzler and Hart, who have all endorsed the former mayor for the Democratic nomination for president.

“I’ve traveled the country with him, I’ve walked the streets of Waterloo with him, and it reminds me so much of what we’re trying to do at home: My city was also described as dying,” Buttigieg continued.

Hart noted after the event his prior meetings with Buttigieg and the fact the two talked extensively about issues affecting minority communities — as well as the scope of Buttigieg’s Douglass Plan — swayed Hart into endorsing him.

“From Day 1 — for the first 30 minutes — our conversation focused on African-American communities,” Hart said. He met Buttigieg through a national mayors organization in Las Vegas and later in Philadelphia. “Once people have the opportunity to actually meet Mayor Pete and talk to him, once they get an opportunity to hear and listen to him, that’s when they can have an informed decision.”

Buttigieg spoke briefly on climate change, political corruption, income inequality, gun violence, God and the military — while also focusing on the importance of the Feb. 3 caucuses, just weeks away.

“Less than 20 days to the Iowa Caucus that will set the trajectory of the primaries and the country and the history of the world — no pressure, Iowa,” Buttigieg said, to laughter.

“I know as we watch the national news, it can get exhausting, dispiriting and makes you want to turn it off and walk away,” Buttigieg said. “But this is our chance to get it right. The power is in our hands in 2020, and Iowa has a pretty great track record of surprising people.”

Buttigieg is still polling in the top tier of candidates among likely Iowa Democratic caucusgoers — he’s at an average of 18.7%, ahead of U.S. Sen. Elizabeth Warren at 16% but behind the polling averages of both former Vice President Joe Biden at 20.7% and U.S. Sen. Bernie Sanders at 20.3%.

Luann Alemao of Cedar Falls asked Hart about his endorsement after Buttigieg’s event, and said she was still deciding between candidates herself. Her top issue was climate change.

“I’m just having a really tough time — I’ve got to dig deeper,” she said.

Photos of the latest visits by Democratic candidates for president.

On Iowa Politics Podcast: The Newsmaker King and a Buttigieg Surge?

This week’s On Iowa Politics Podcast: The Newsmaker King and a Buttigieg Surge?

After four candidates took their turns getting fairly straightforward softball questions thrown their way, South Bend Mayor Pete Buttigieg may have been hoping for more of the same.

A longtime state legislator has endorsed the top-polling Democratic candidate for president.

A state senator representing the Cedar Valley has thrown his endorsement behind the top-polling Democratic presidential candidate in Iowa.

A poll of likely Democratic caucus-goers finds that 29 percent think Minnesota U.S. Sen. Amy Klobuchar is best suited to address the needs of rural Iowa, but the same percentage say they will support former Vice President Joe Biden when they caucus Feb. 3.

A roundup of campaign news items of interest for Wednesday, January 22, 2020:

Beyond the Stories: Covering the Iowa Caucuses in 2020

Courier editor Nancy Newhoff interviews Courier political reporter Amie Rivers about what it's like to be an Iowa journalist covering the 2020 presidential election.

Former Vice President Joe Biden kicked off the last week before the Iowa Caucuses in Cedar Falls, making the case for a more moderate candidate.

Pete Buttigieg, the former mayor of South Bend, Ind., will hold 4 events in Waterloo and area towns this week.

Waterloo Mayor Quentin Hart introduces Pete Buttigieg at a campaign event at Maucker Union on the UNI campus in Cedar Falls on Wednesday.