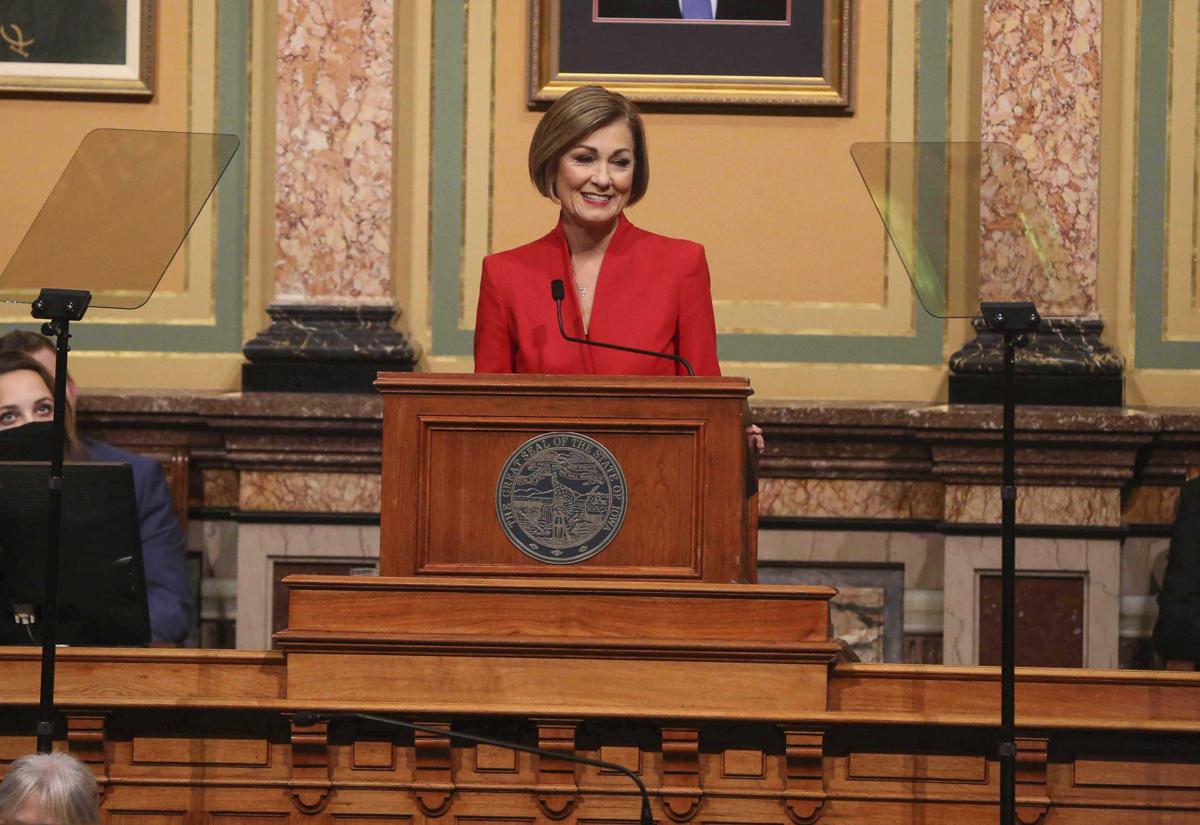 Gov. Kim Reynolds delivers her Condition of the State address before a joint session of the Iowa Legislature on Tuesday at the Statehouse in Des Moines. 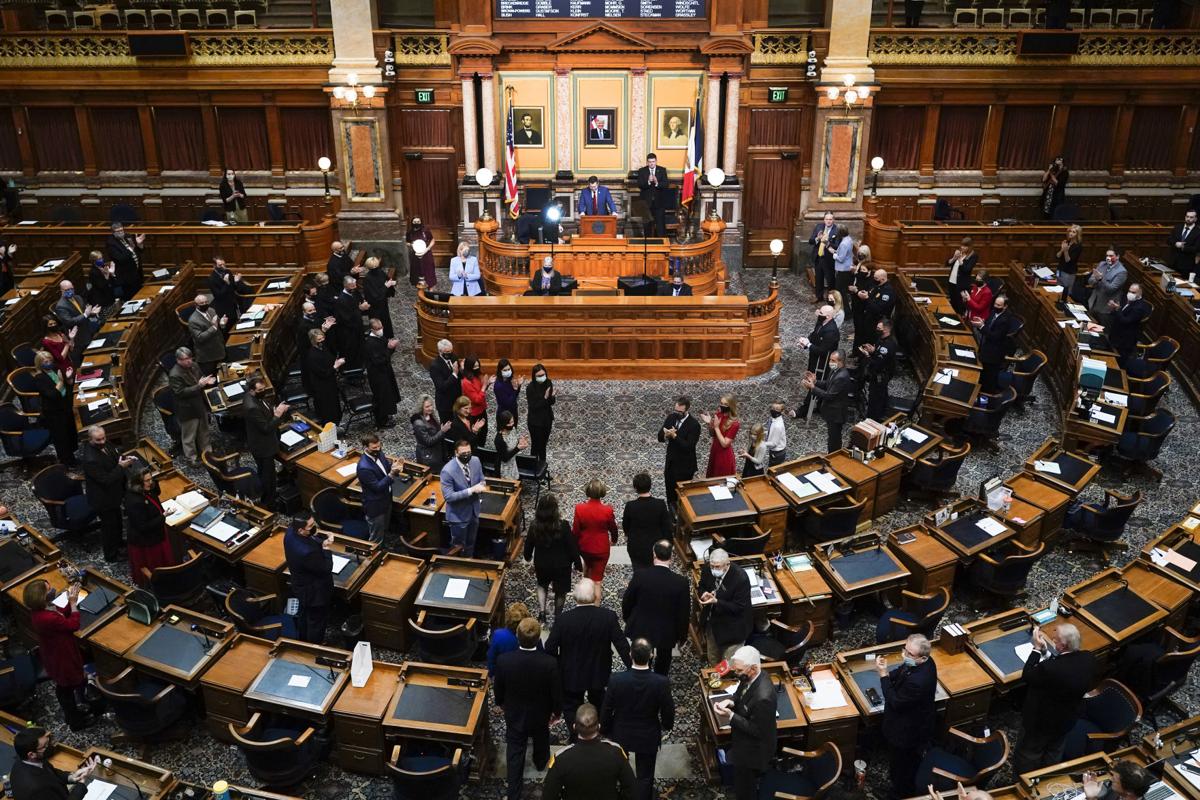 Gov. Kim Reynolds arrives to deliver her Condition of the State address before a joint session of the Iowa Legislature on Tuesday at the Statehouse in Des Moines. 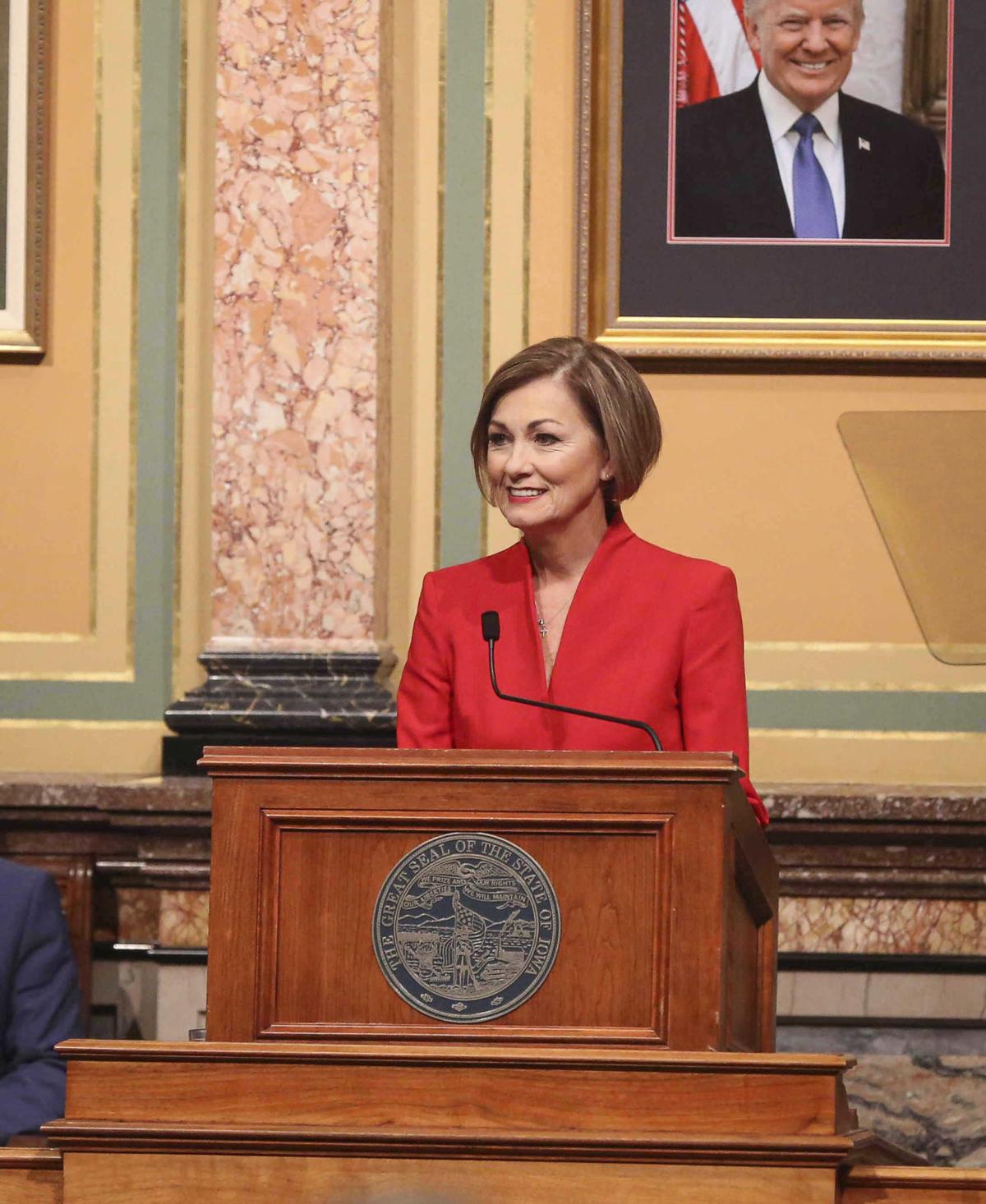 In a change from the usual format, Reynolds delivered the annual address Tuesday night. Typically it is given during the day.

Her speech, delivered as usual from the House chamber at the State Capitol, was packed with content: In addition to praising Iowans’ responses during a trying year, the governor made multiple, significant policy and financial proposals.

Perhaps none was more significant than Reynolds’ pledge to introduce legislation that she said promotes social justice and protects law enforcement officials. Reynolds will propose a ban on racial profiling by police, and also define punishments for anyone who participates in a riot or attacks law enforcement officers.

“I’ll be introducing a bill that protects law enforcement and continues our march toward racial justice,” Reynolds said. “The bill will make clear that if you riot or attack our men and women in uniform, you will be punished. We won’t stand for it. The bill will also ban racial profiling and other forms of disparate treatment. Because no actions should ever be taken based upon the color of someone’s skin. As Martin Luther King Jr. recognized, ‘Injustice anywhere is a threat to justice everywhere.’”

In 2020, Reynolds and state lawmakers approved social justice legislation shortly after the death of a Minnesota man who died in police custody, which sparked civil unrest and a national discussion about race and the use of police force.

That legislation banned the use of police choke holds, with some exceptions; required de-escalation and bias training for police; banned hiring officers who have been fired for misconduct or for using excessive force; and cleared the state attorney general to investigate cases when an officer’s actions resulted in a death.

But Reynolds said she will not participate in any efforts to cut law enforcement budgets, a reference to a rallying cry that emerged from some of last year’s protests.

“That’s not going to happen in Iowa. Not on my watch,” Reynolds said. “We should never be afraid to talk about ways to improve policing, but there will be no talk of defunding the police here. Our men and women in blue will always have my respect, and I will always have their back.”

Reynolds also made a nearly half-billion-dollar pledge when she called on state lawmakers to establish the goal of getting affordable, high-speed broadband internet access to all corners of Iowa over the next four years.

Reynolds proposed $450 million in state funding to achieve the goal. She predicted the state funding would attract “millions more” in private investment.

“I’m done taking small steps and hoping for big change. This is the time for bold action and leadership. Let’s plant a stake in the ground and declare that every part of Iowa will have affordable, high-speed broadband by 2025,” Reynolds said.

Reynolds said the COVID-19 pandemic, which forced many Iowans to work and learn from home, highlighted what was already widely acknowledged to be an area of need. She said roughly a third of Iowa’s 99 counties are classified as broadband deserts, where high-speed internet is rarely offered, and that Iowa has the second-lowest broadband speeds in the country. She also said that often when high-speed internet is available, it is expensive.

“As we’ve seen during the pandemic, high-speed internet is as vital to our communities as running water and electricity. If they don’t have it, they can’t grow,” Reynolds said.

Reynolds also made multiple proposals for K-12 education, including a requirement that districts give students and families the option for 100% in-person instruction; a requirement that all districts permit open enrollment; state funding families could use to pay for private school tuition; and the creation of charter public schools, which operate free of state education guidelines.

“Make no mistake, it’s imperative that we have a strong public school system — which is why we have and will continue to prioritize school funding while many other states are cutting their education budgets,” Reynolds said. “But school choice isn’t a zero sum game. It has the potential to raise the quality for all schools. And for those schools that do fall behind, it ensures our children don’t fall with them. Let’s work together to make sure every child receives a quality education, regardless of income, and no matter their zip code.”

“Let’s remove the obstacles to high-quality, affordable child care so that Iowa families can nurture their kids while parents maintain the maximum freedom to enter and remain in the workforce,” Reynolds said.

Reynolds began her remarks by chronicling the challenging year that was 2020. She noted the COVID-19 pandemic, social unrest, and natural disasters. And she highlighted stories of Iowans who helped others during those uncertain times.

“We’ve been beaten and battered in about every way imaginable and some unimaginable. But together, we’ve met every challenge with bravery and outright grit,” Reynolds said. “We’re told that tribulation produces perseverance and perseverance, character. From what I’ve seen, there’s no shortage of character in the people of Iowa. And despite what we’ve been through — or maybe because of it — the condition of our state has never been stronger.”

While she praised Iowans from many sectors, Reynolds was particularly effusive in her praise of the state’s health care workers.

“In 2020, you worked some of the longest hours, in the most uncertain conditions. Your actions saved lives. Your spirit inspired us,” Reynolds said. “And you didn’t just provide medical care. Your patients often couldn’t be with their loved ones, so you also provided them comfort and company. You sat with them when no one else could. You held their hand, facilitated calls to family, and in some cases stood by them while they took their last breath. While many of us were shielded from the worst of the pandemic, you were on the front lines every day. We cannot sufficiently express our gratitude, but we will try.”

At one point during her remarks, Reynolds called for a moment of silence for those who have lost their lives due to COVID-19.

More than 4,200 Iowans have died during the global pandemic since March of 2020. Nearly 380,000 people in the United States have died from the disease.

The letter says vaccines should "be distributed in a more expeditious manner."

Hundreds of people --- few, if any of them wearing face coverings --- packed into the Iowa Capitol rotunda on Monday, and then into the Senate and House chamber galleries.

Lawmakers said they intend to push forward additional funding and legislation to facilitate continued expansion of high-speed broadband internet across the state, with more and more Iowans working and learning from home and accessing medical care online.

Miller-Meeks: Other ways to hold Trump accountable; will vote against impeachment

Miller-Meeks reiterated on Wednesday that impeaching Trump a week shy of the end of his term would "only further divide the nation and make it more difficult for President-elect Joe Biden to unify and lead our nation."

On Iowa Politics: The governor, the Iowa Legislature and the second impeachment

On this week’s edition of the On Iowa Politics podcast: The governor, the Legislature, and impeachment.

Gov. Kim Reynolds delivers her Condition of the State address before a joint session of the Iowa Legislature on Tuesday at the Statehouse in Des Moines.

Gov. Kim Reynolds arrives to deliver her Condition of the State address before a joint session of the Iowa Legislature on Tuesday at the Statehouse in Des Moines.