Become a Member
Read Today's E-edition
Share This
WATCH NOW: DeJear 'going to put in the work' as Iowa governor, she says in Waterloo
0 comments
Share this
1 of 2 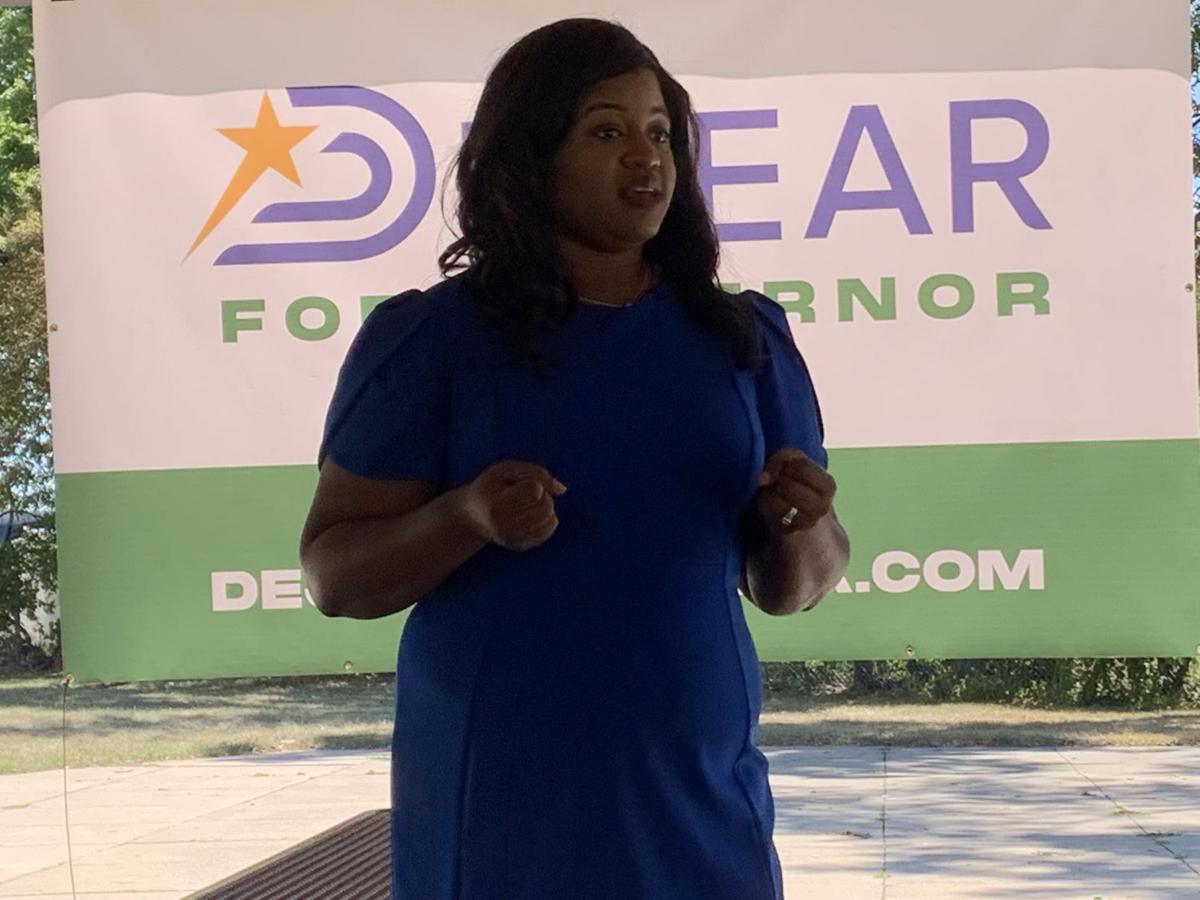 Democratic candidate for governor Deidre DeJear speaks to the crowd during a campaign event at Sullivan Park in Waterloo on Sunday. DeJear is running for the Democratic nomination for governor in 2022. 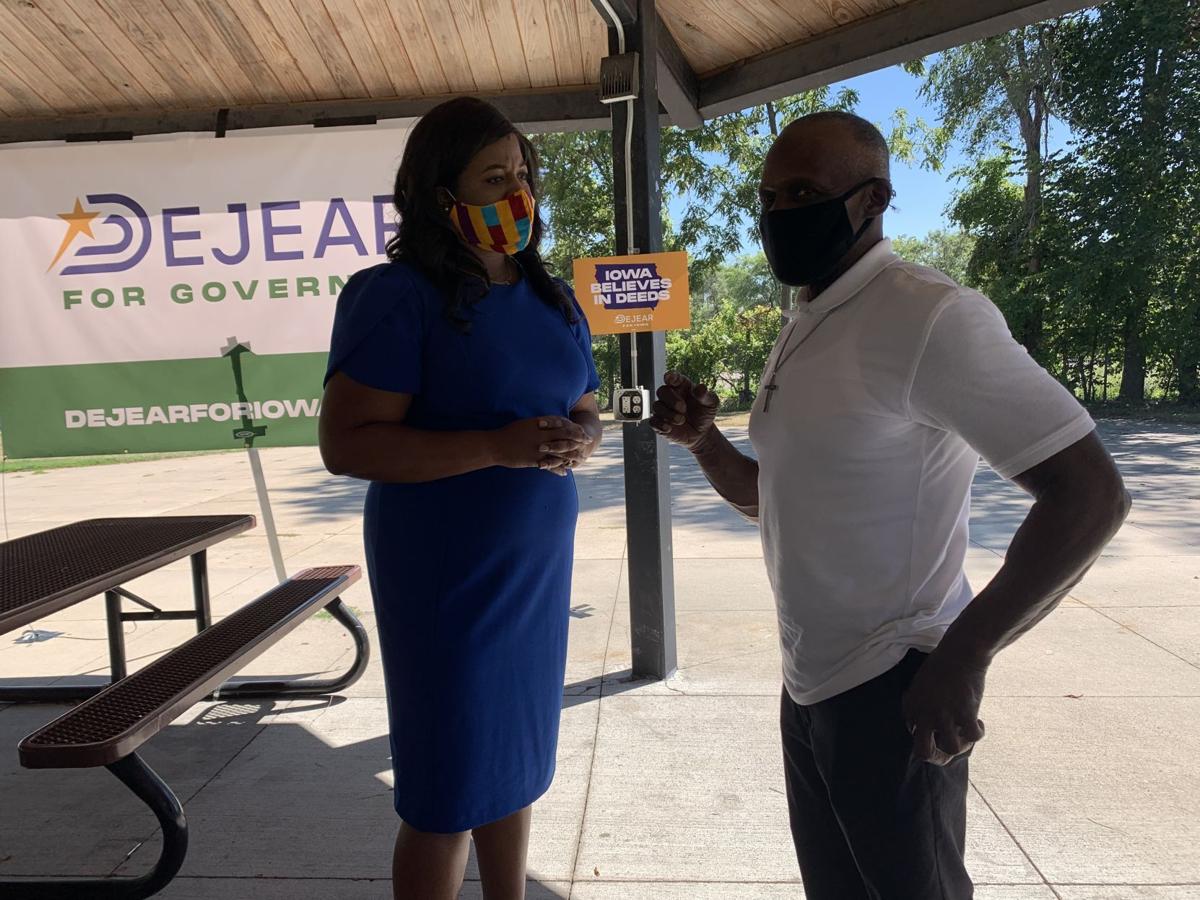 Gaylord Washington of Waterloo, right, talks with Democratic candidate for governor Deidre DeJear after a campaign event at Sullivan Park in Waterloo on Sunday, Aug. 15, 2021. DeJear announced Aug. 14 she would run for the Democratic nomination for governor.

WATERLOO — Deidre DeJear landed in Iowa like many residents of Waterloo: Originally from Mississippi, and “by way of Oklahoma,” she was looking for better opportunities when she arrived to attend Drake University.

“I did not want to leave this state for any reason, because I felt like there was something special,” she said. “There was a reason why I was here.”

A day after DeJear, 35, announced her run as a Democratic candidate for governor in 2022, she stopped in Waterloo, the hometown of the other Democratic candidate, state Rep. Ras Smith. A handful of people stopped by Sullivan Park to see her, including state Sen. Eric Giddens and LaTanya Graves, NAACP of Black Hawk County president.

“As I’ve been traveling throughout the state, what I’m hearing is that people don’t believe that the state believes in them anymore,” she said. “That starts at the top.”

DeJear, who owns Des Moines-based Caleo Enterprises, is running her first race for Iowa governor but is no stranger to politics. She was a field organizer and the statewide African-American vote director of Obama for America in 2012; the Democratic nominee for secretary of state in 2018, losing to Paul Pate; and ran Kamala Harris’ Iowa presidential campaign in 2020.

‘Born to do,’ DeJear considers running for Iowa governor in 2022

On Sunday at Sullivan Park, DeJear talked about issues like charter schools, the state’s “mental health crisis,” the “skills gap” that is leaving some employers searching for qualified workers, and the “wage gap” that leads highly educated people to leave for better opportunities.

“They believed that life, liberty and happiness was owed to each and every one of us, and folks weren’t showing up to do it,” DeJear said. “Whether we believe in their tactics or not, at the heart of their concern was that the state was not putting in the work.

“If you’re going to hear anything out of me today, it’s that I’m going to put in the work,” she added. “It’s all hands on deck right now, because we are at a critical time in our history.”

Gaylord Washington of Waterloo asked DeJear about the recently passed laws in Iowa that shorten the window to vote. DeJear called it a “voter restriction bill” that Republicans passed because they are worried about Democratic voters.

“Here’s the thing: That should be our indicator that this is possible,” she said. “That bill should kind of make you put your chin up a little bit: They think we’re something here. They think we can get stuff done here, so they’re creating restrictions. Overcome them, because we can. It’s possible.”

Washington ended up taking home a couple of DeJear signs after the event.

“I agree with everything she said,” Washington said. “We have to stay fighting.”

It is that sense of optimism and desire to bring people together to solve problems that made DeJear run, she said after the event.

“This community is very special to me,” she said of Waterloo. “I wanted them to know that I’m here for them, that I want to be their fearless leader that is going to lead us through a trajectory that’s more positive, that’s putting people in Black Hawk County first.

“This is a county that sometimes gets left behind as it relates to our state leadership,” she added. “I see the potential that exists in this county, as I do so many others.”

DeJear is the second Democrat running or exploring a run for governor; Ras Smith, a state legislator from Waterloo, previously announced his campaign.

On this week’s edition of the On Iowa Politics podcast: DeJear is running, party crashers, leaving Afghanistan, and Biden vs Reynolds.

Democratic candidate for governor Deidre DeJear speaks to the crowd during a campaign event at Sullivan Park in Waterloo on Sunday. DeJear is running for the Democratic nomination for governor in 2022.

Gaylord Washington of Waterloo, right, talks with Democratic candidate for governor Deidre DeJear after a campaign event at Sullivan Park in Waterloo on Sunday, Aug. 15, 2021. DeJear announced Aug. 14 she would run for the Democratic nomination for governor.